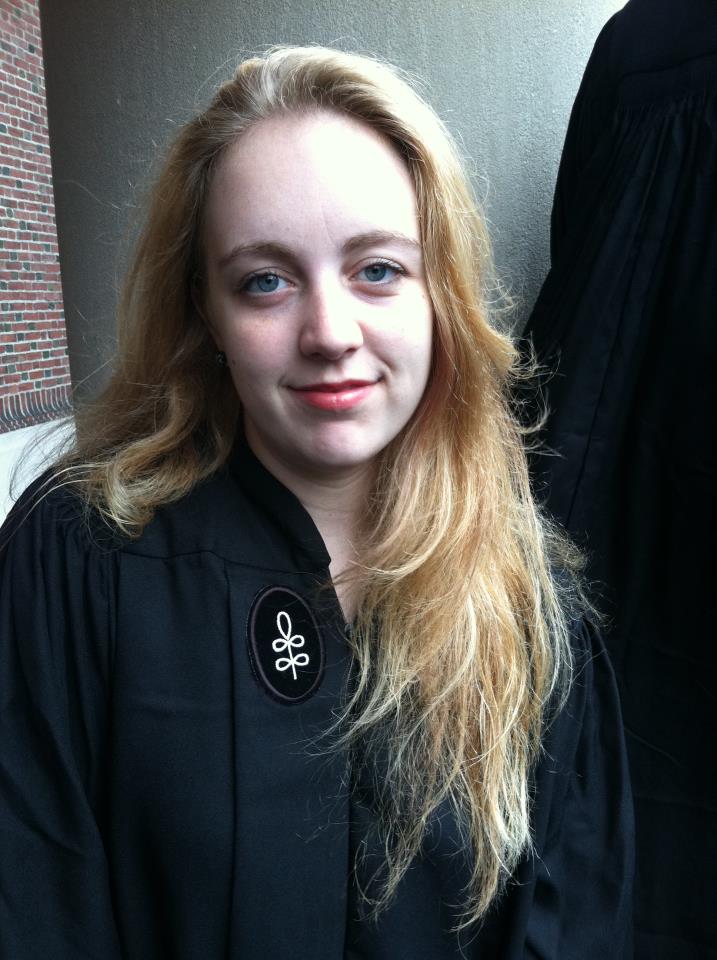 Juliet N. Macchi ’12, pictured just before her Class Picture during the week of her Commencement, was remembered by friends as creative, free-spirited, and fearless. Macchi and her mother died as a result of a car crash Saturday night.
By Pooja Podugu, Crimson Staff Writer

When Juliet N. Macchi ’12 first approached Alexis C. “AC” Gomez ’13 with an invitation to go skydiving, Gomez reacted with pure terror. But after Macchi insisted repeatedly that they make the jump together, Gomez eventually allayed her fears and agreed.

“I always thought of her as someone who was never really afraid to do things,” Gomez said. “She always wanted to take that chance. It was very much her mentality on life: even if something was scary, just jump, just go for it.”

Macchi, a former resident of Lowell House and a concentrator in Visual and Environmental Studies, was killed alongside her mother Susan Brightman Macchi as a result of an automobile accident late Saturday night near Plymouth, Mass. Macchi was 23.

The women were making their way home from a Red Sox game when a vehicle collided with their car head-on. The crash instantaneously killed Brightman Macchi, and Macchi died shortly after being transported to nearby Jordan Hospital, police said.

Friends and a professor all remembered Macchi as a free-spirited individual and artist who shied away from convention and indulged in her own unique passions.

“Juliet was really an artist in life and in everything she did,” said Diana L. Eck, Lowell House master and Macchi’s former professor.

Many who knew her recounted Juliet’s passion for the arts, especially as manifested in her senior thesis project. According to Eck, Macchi created for her project an installation piece consisting of a foam bridge and “literally thousands upon thousands of paper stars,” which she then affixed to the bridge using small pins.

In describing the piece, Macchi’s friend Breeanna M. Elliott ’15 said that one of Macchi’s goals for the work was to intimate that “anyone can do art, and anyone can enjoy it.”

Those who knew Macchi noted that the focus and dedication she applied to her thesis was characteristic of her work ethic in every activity in which she involved herself.

“If she loved something, she was going to find a way to do it,” Gomez said.

In particular, friends noted Macchi’s passion for skydiving, which was a defining part of her personality. According to her peers, Macchi spent almost every weekend jumping from planes.

In a speech she gave at Lowell House before her graduation, Macchi explained the reason she enjoyed skydiving so much.

“I want a chance to be swept along by events beyond my control,” she said. “To stop worrying about what was the right or the smart thing to do, and give myself a chance to breathe, to get to know more the person I've become.”

After graduation, Macchi attended the Burning Man festival in Nevada, before taking up a job as a shift manager at a Dunkin’ Donuts location in Carver, Mass. Macchi and her mother were preparing to move to California this month, where Macchi intended to work as a grip on a film set, according to an email from Eck and Lowell co-House master Dorothy A. Austin sent to Lowell House residents Monday.

A number of friends noted that Macchi’s love for her mother was one of her most distinctive traits. Eck said that part of Macchi’s dedication to Dorm Crew stemmed from a desire to treat her mother to a cruise.

Macchi’s peers said that she extended the same love and compassion to her friends during her time at Harvard.

“Right from the start it was clear that Juliet was a special and unique person,” wrote Margaret “Maggie” E. Geoga ’12, Macchi’s roomate through all four years of college, in an email to The Crimson.  “She was always positive, always looking for a silver lining or a way to make a tough situation better. She was an incredibly loyal friend and an important support for all of us whenever we needed her.”

Macchi and Geoga were joined in their sophomore year in Lowell by Marina M. A. Connelly ’12, together forming a trio that Eck described as “inseparable.”

“She was loyal and dedicated to the causes she chose and people she loved with a formidable tenacity,” Connelly wrote in an email. “I will always love her.”

Macchi and her mother are survived by Macchi’s father and Macchi’s three older brothers, Matt, Mike, and Richard Macchi. A tribute in Macchi’s honor will be held Thursday at 8 p.m. in Lowell House Junior Common Room.