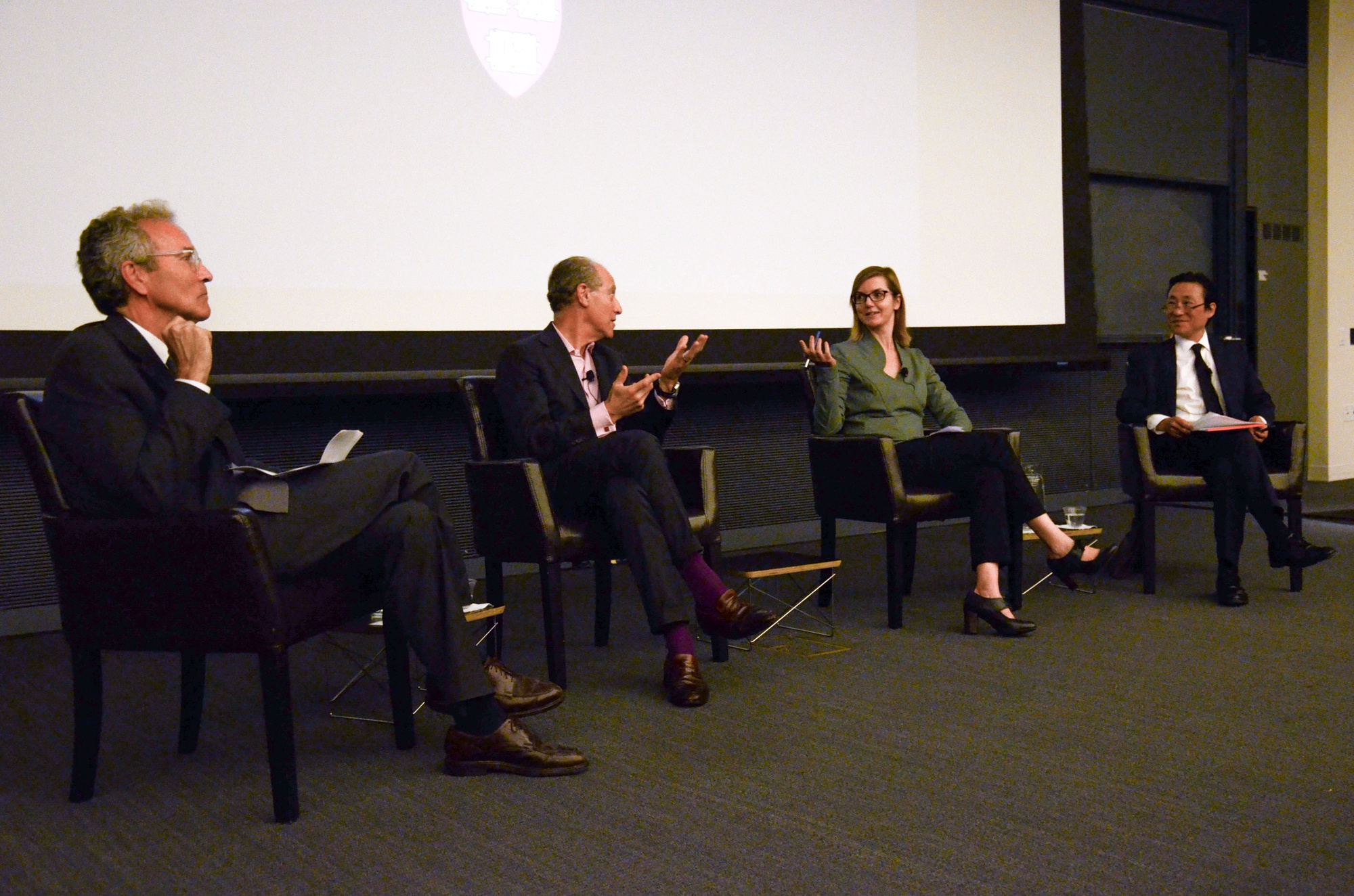 In anticipation of the reopening of Harvard Art Museums, Thomas W. Lentz, Glenn D. Lowry, Jennifer L. Roberts, and Paul Ha explore the role of art museums in the digital age and the importance of atmospheric aesthetics in shaping the viewer’s experience during Thursday night's forum.
By Kay Lu, Contributing Writer

University President Drew G. Faust convened a panel of some of the art world's top critics and curators on Thursday afternoon to discuss the continued importance of art museums on university campuses in the 21st century.

The panel comes just about a month ahead of the scheduled reopening of the Harvard Art Museums after six years of renovation and redesign. 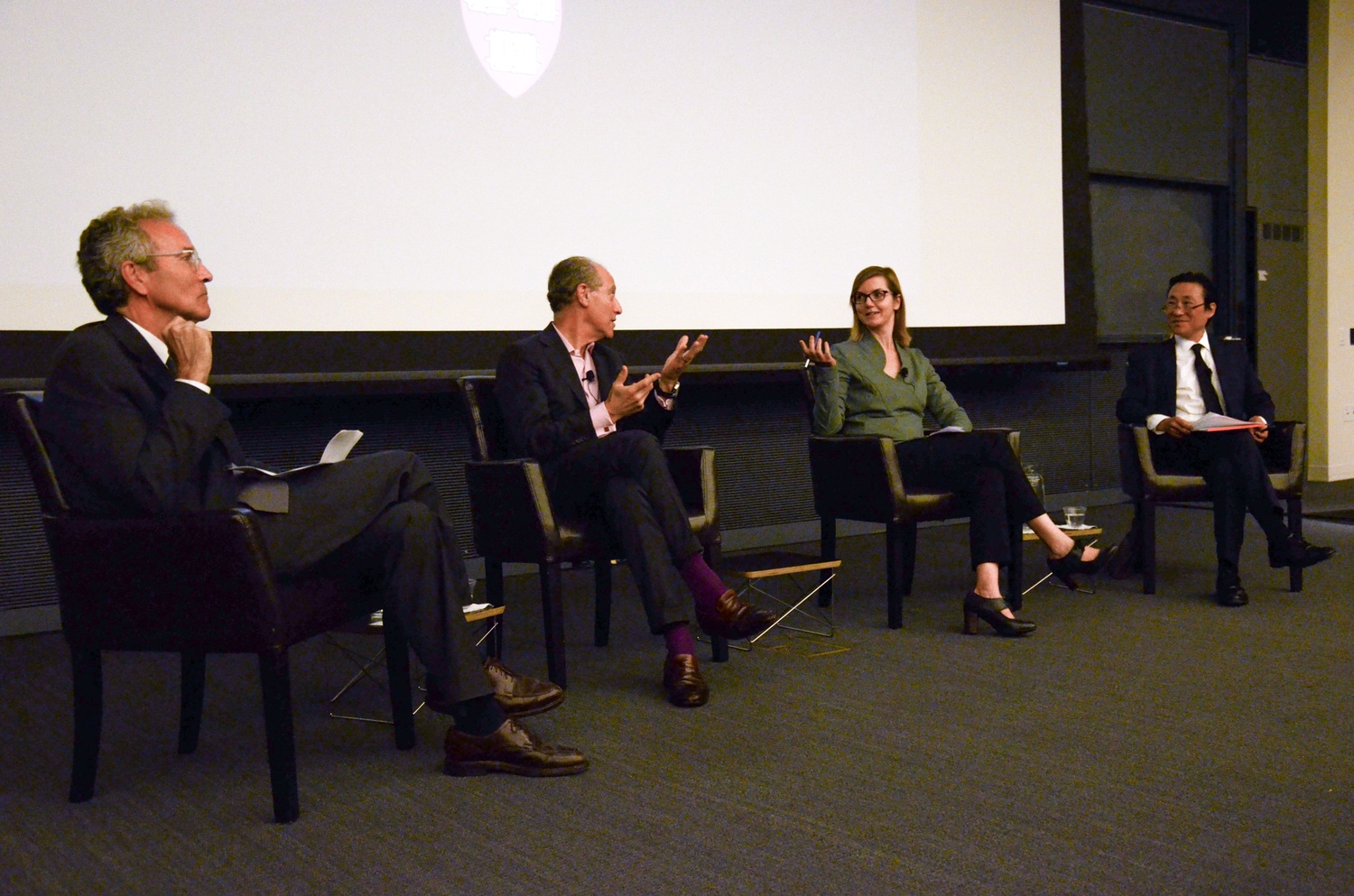 In anticipation of the reopening of Harvard Art Museums, Thomas W. Lentz, Glenn D. Lowry, Jennifer L. Roberts, and Paul Ha explore the role of art museums in the digital age and the importance of atmospheric aesthetics in shaping the viewer’s experience during Thursday night's forum. By Katherine L Borrazzo

“Today we want to generate a conversation about what that [art museum] means for this University, this city, and the world,” Faust said during her introduction to the panel.

Director of the Harvard University Art Museums Thomas W. Lentz moderated the event. He began by asking panelists what they believe art museum means to a university.

Jennifer L. Roberts, a History of Art and Architecture professor, said that the status of art museums on university campuses as a “luxury” should be reevaluated.

“The term ‘luxury’ is a serious and dangerous one when applied to university art museums and museums in general,” she said. “It’s a public relation problem that university museums have to get over.”

Roberts said that while museums do contain many valuable objects, they should be seen as accessible to the public.

“Treasure is a term that [is] partially applicable to the objects in the museum. When we say treasure we often mean something exclusive, something secret,” she said.

The panelists also discussed the modern museum’s challenge to remain relevant in the digital age.

Director of the Museum of Modern Art Glenn D. Lowry said he believes allowing visitors to take photographs at museums would make art more accessible to the public.

“Use [photo-taking] as an opportunity for people to share not only with each other as they are in the museum, but with all their friends outside of the museum,” Lowry suggested.

Paul C. Ha, the director of the List Visual Arts Center at MIT, said that he was confident in the continued value of brick-and-mortar museums.

“Tech is a great tool for finding the content, but in the end, it is not the same,” he said. “I believe in the power of art.”

During the question and answer session, Lentz responded to a question about what Harvard’s reopened museums will offer by saying that the new museums are designed to be more accessible to students and community members.

“You can enter through one entrance and go out the other without actually entering the museum. The courtyard is going to be a new public gathering space,” he said. “We don’t want it to be a static treasure house.”

The panel attracted scholars as well as students who said they were drawn to event because of the expert panelists.

Samuel Adams, a Ph.D. candidate in Art History at the University of Southern California, called the panel was “a meeting of minds.”

“I am very impressed by the panel, and it is very exciting to hear that they are actually considering incorporating new technology into the museum,” he said.