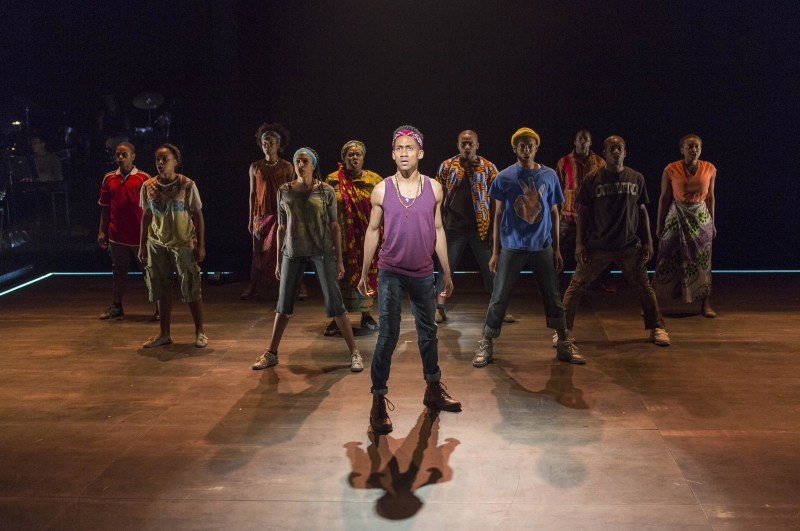 Griffin Matthews as Griffin in the ART's "Witness Uganda." By Courtesy of Gretjen Helene Photography

In “Witness Uganda,” a new musical running at the American Repertory Theater through March 16, an aspiring American actor named Griffin is prompted by a show of intolerance at his church (he is expelled from the choir due to his sexuality) to go searching for himself in Uganda. What he finds differs from what he was expecting. Griffin’s journey of self-discovery is complicated as he learns unsavory truths about the volunteer program for which he has signed up and is confronted with the idea that he may be incapable of making a difference. The musical, directed by ARTmainstay Diane Paulus, is based on the experiences of one of its writers, Griffin Matthews. Matthews first visited Uganda in 2005 and founded the organization UgandaProject.

“Witness Uganda” succeeds in tugging at the heartstrings; you will leave the theater feeling moved, even, perhaps, compelled to donate to Matthews’ foundation. Unfortunately, the dialogue and lyrics fail to live up to the melodies and visuals in which they are couched, and the vision of Uganda proffered by the musical is problematic.

The production’s greatest asset is undoubtedly its score. “Witness Uganda” boasts a flurry of songs that are mind-bogglingly hummable: plangent, heart-thumping, pop-influenced and pathos-evoking. “Invisible Thread,” “Put It All On The Line,” and “Bricks” in particular plant themselves in the head and linger afterwards.

An equally captivating set design enhances the hypnotic nature of the score. The choice to substitute projected images for a constructed set is a smart one. The bareness of the beautifully lit stage simulates the expansiveness of the outdoors better than any assemblage of set pieces could hope to. The projections themselves are an effective complement to the music; the musical numbers are arresting on both a visual and an aural level, and they create an atmosphere of total engagement that helps to distract from the production’s weak spots.

The weakest among these problem areas is the lyrics: the music of “Witness Uganda” makes a beeline for the heart but bypasses the brain. Stripped of their fortifying melodies, Matthews and Matt Gould’s lyrics would collapse under the weight of their own abstractness. The majority of the songs in “Witness Uganda” are clumsily cobbled together. Typically, verses rife with single syllable words alternate with a chorus in which vague, naturalistic imagery is tied to emotional growth.

The libretto, too, suffers from a lack of depth. Act One in particular brims with platitudes, and while the characters’ dialogue is realistic, their conversations serve little purpose other than to do what the songs don’t—advance the plot. As a result, character development takes a backseat. With the exception of Joy (Adeola Role) and Jacob (Michael Luwoye), workers at the compound that hosts Griffin’s volunteer program, the characters in “Witness Uganda” are resolutely two-dimensional.

The failures of the lyrics and dialogue are nearly overcome by the talents of the actors charged with delivering them. It is difficult to fixate on the laziness of this or that lyric when the vocals come from Emma Hunton, Nicolette Robinson, or Kristolyn Lloyd. Hunton plays Griffin’s best friend and fellow struggling artist Ryan; Robinson and Lloyd play Eden and Grace, Ugandan teenagers who befriend Griffin and become his students. Each of these actresses makes the most of the material they are given to work with. Ryan, Eden and Grace are not dynamic characters, but due to the acting chops of the women playing them, they manage to be mostly believable and highly sympathetic.

Unfortunately, there is no redress for the production’s subtler failings. There are elements of the piece that point toward the kind of exploitative, simplistic representation of an African nation that no one wants to endorse. The dance numbers are mesmerizing, but the namelessness of the dancers that comprise the ensemble is problematic. They not only move as one but also seem to think and act as one. When they appear in non-musical scenes, their actions and expressions are uncomfortably uniform. The issue is not improper handling of the chorus; choruses, by their very nature, tend toward deindividuation. But in “Witness Uganda,” this sometimes seems to promote an uncomfortably simplistic image of the Ugandan people. As a consequence, a serious musical about Uganda, written by a Westerner for a Western audience, probably should not include a chorus, period.

Ultimately, the creative team and cast of “Witness Uganda” are its saving grace. It would be inaccurate to say that they do the material justice; rather, they elevate it miles higher than anyone reading the script could reasonably expect it to go. This is not a musical that should be read or revived. But it is a powerful piece of what might best be described as activist theater. It is the product of a professional activist, based on a true story and attached to a very real foundation (t-shirts and informational pamphlets are available in the lobby). Consequently, it resists criticism as a theatrical work. Is “Witness Uganda” a particularly good musical? No. Is it a brilliant and effecting piece of advertising? Yes. Is it worth seeing? That depends on what you’re looking for.