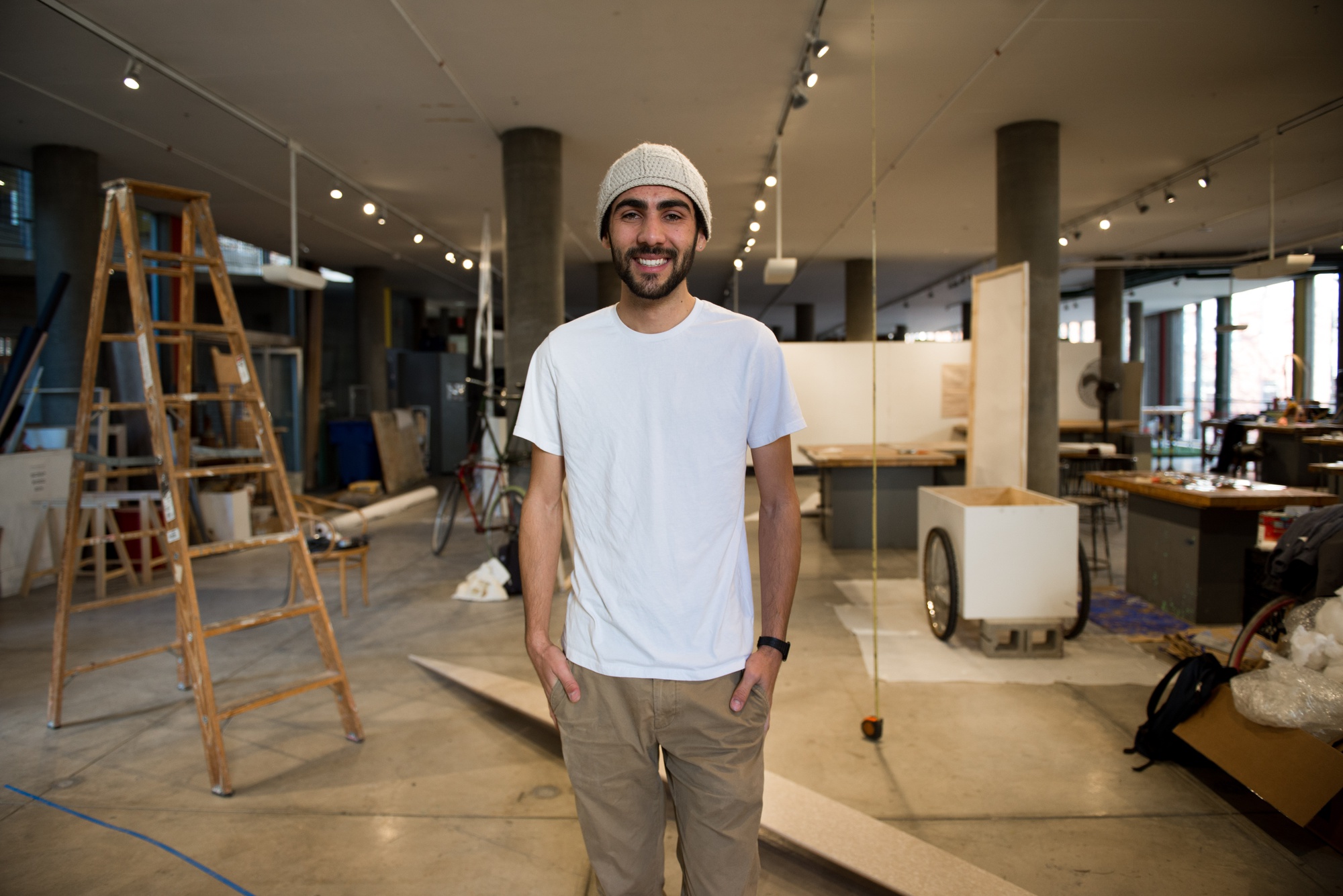 Orman poses in front of his work area in the Carpenter Center, which is covered in his works-in-progress and completed sculptures. "I used to take up the entire area," said Orman, claiming he is "basically an artist in residence." By Alana M Steinberg

It's not hard to spot Billy Orman on his double-height "frankenbike."
By Lena K. Felton

Billy Orman is climbing down a 10-foot ladder on the airy second floor of the Carpenter Center when I first meet him. He’s got a silver stud in one ear and an oatmeal-colored beanie hugging his head; Afrobeat is floating out of the speakers behind him.

Here are some basics about Orman: He rides around campus on a double-decker “frankenbike,” which he made himself (he calls it “High Horse,” so his friends can yell at him, “Get off your High Horse!”). He loves to work with his hands. He’s from a very small town in Arizona called Tuba City, which is situated on a Navajo reservation (though Orman himself isn’t Native American). 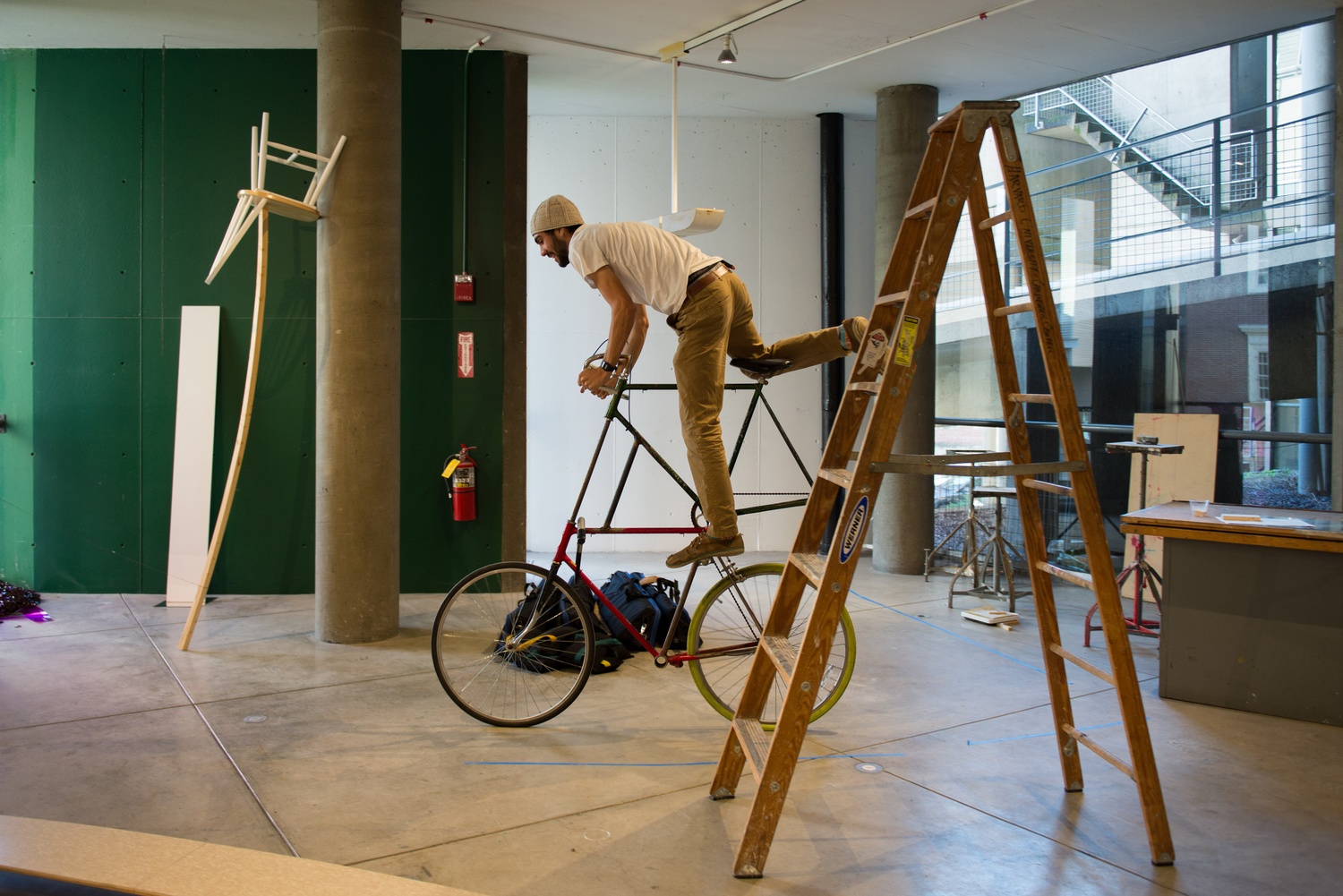 Billy C. Orman '16 rides his "Frankenbike" around the Carpenter Center. Also called "High Horse," this is just one of Orman's ouevre of modern Duchampian sculptures. By Alana M Steinberg

We meet in the Carpenter Center because this is where Orman spends “almost all” of his time; he’s “basically an artist-in-residence,” he tells me. He’s taking three Visual and Environmental Studies courses this semester, because he just transferred into the concentration (yes, indeed, in the fall of his senior year). He’d previously been a History concentrator, but came back to campus this year “dreading” taking more history classes. So he chose to spend the rest of his time here doing what he actually enjoys, which goes back to the basics: He loves to work with his hands. 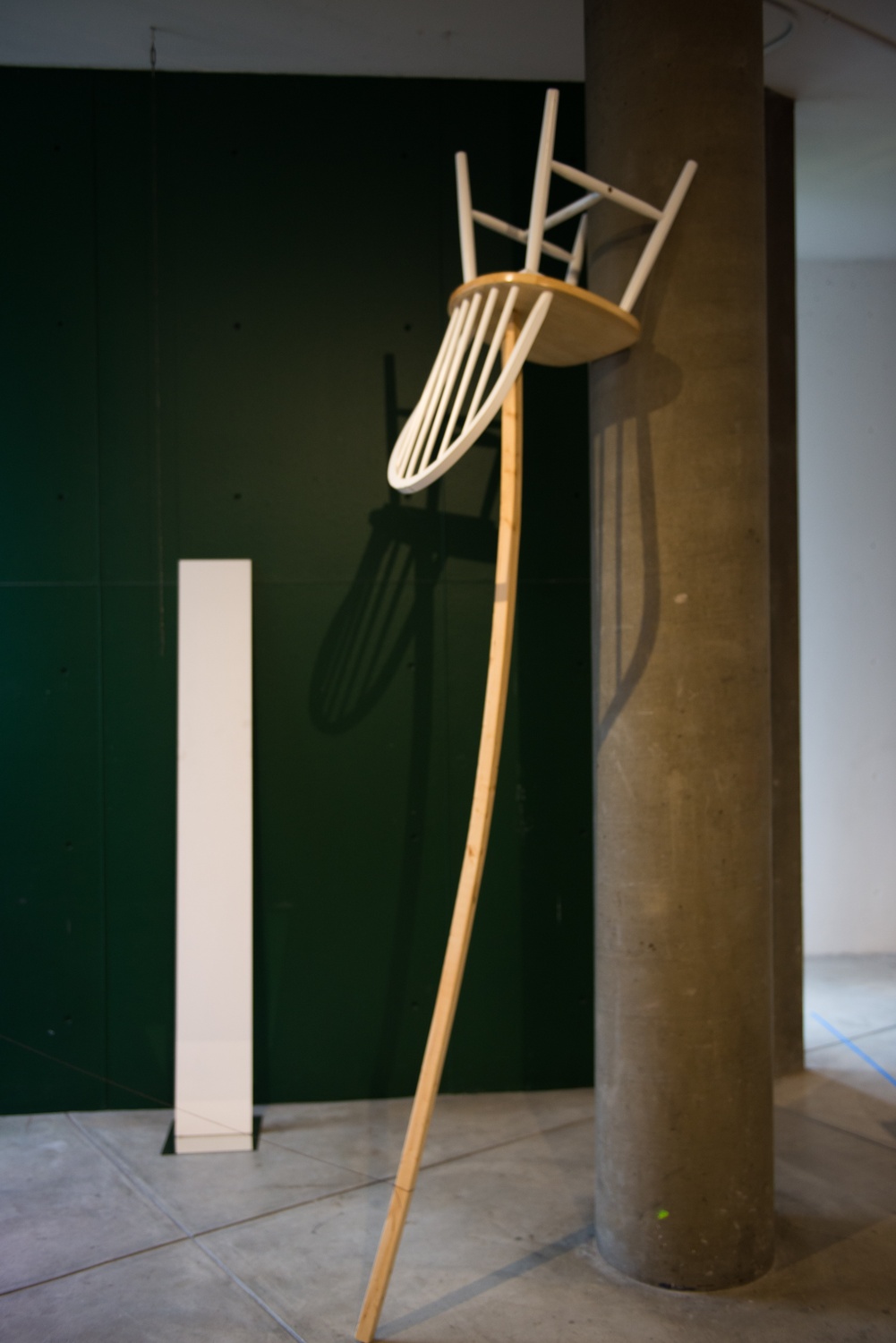 "Be careful!" Billy warned the photographer. "It's booby-trapped," explaining the chair resting upside-down on top of a wooden pole. "I like to take normal things and make them useless... in a poetic way." By Alana M Steinberg

I learn very quickly that Orman is used to making big changes in his plans. He came to Harvard as a recruited cross-country runner—he modestly glosses over the fact that, in high school, he was a “pretty successful runner” and set a few state records. But he was ultimately “dissatisfied” here as a freshman, so he transferred to Stanford his sophomore year. During track season there, he decided that collegiate athletics weren’t for him, so he quit. “And then I realized, like, I didn’t have any friends,” he explains. So he transferred back to Harvard, where he felt he’d established a tighter-knit community.

Enter: Sculpture classes, Kirkland House, and dropping extracurriculars in order to have time for “self care.”

“I guess what makes me interesting, in a Harvard context, at least, is that I’ve done what I like as opposed to what I’m good at,” Orman tells me. “I don’t know if any of this art is good. And it doesn’t really matter to me. I just do it because I love it. And I’m really good at running, but I quit, because it wasn’t something I loved.”

I ask him to show me one of his favorite pieces, so we walk up to a tape measure hanging from the ceiling. Yet this tape measure is completely blank—Orman stripped its numbers with “heavy duty” chemicals. In general, Orman likes exploring the idea of rendering ordinary objects (tape measures, chairs, T-shirts) completely useless; he thinks it’s “kind of poetic.”

Although Orman doesn’t have any concrete plans for after college, he does know he wants to pursue art in some capacity. And he’s sure of a couple other important things. 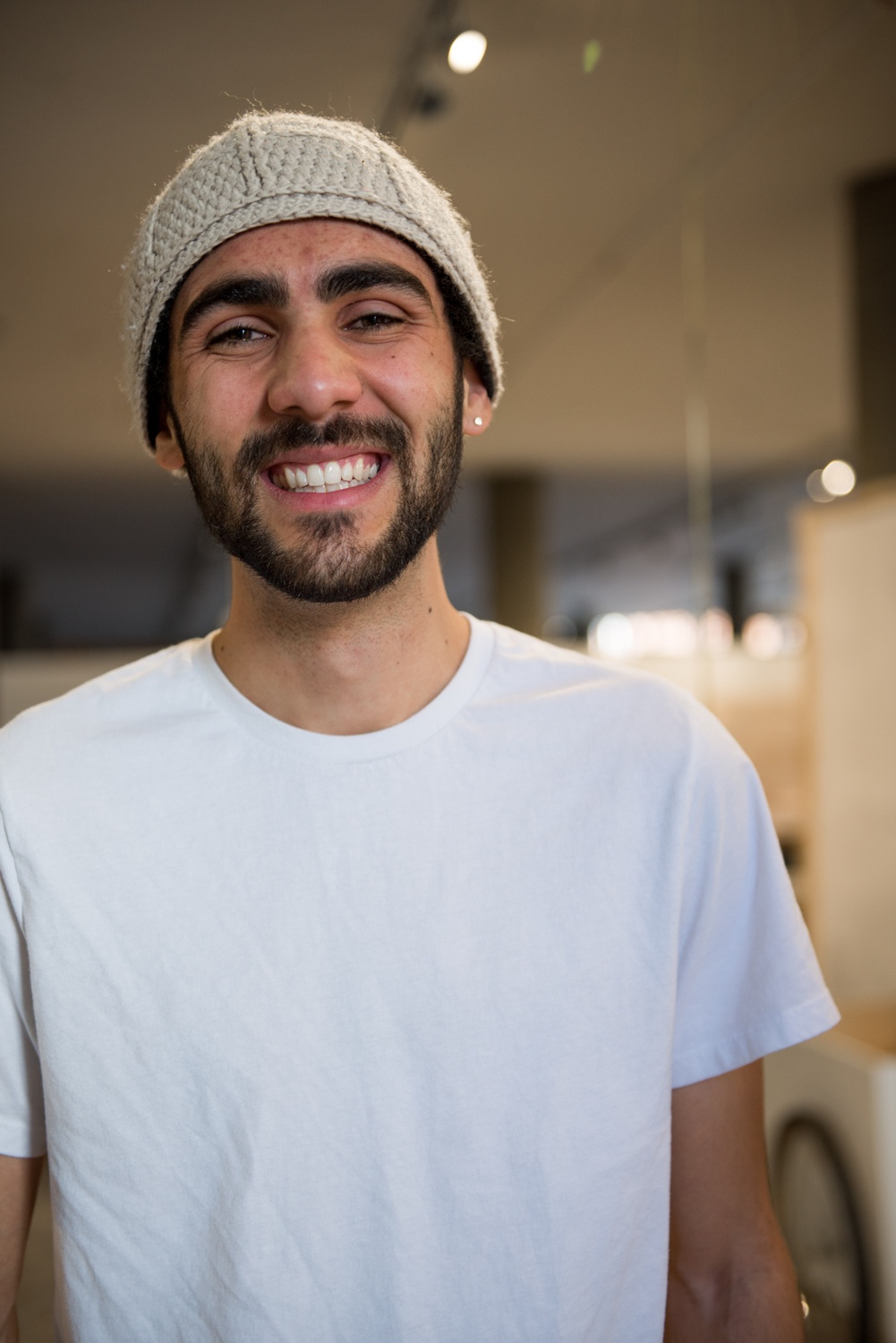 “I want to be happy, and I am so happy in the studio, making the stuff I want,” he says, motioning towards the sculptures that surround him. “It took me sort of a long time to act on that idea, but now I feel like I’ve sort of just figured it out.”