'The Harder They Come' Comes Easily at a Hard Topic 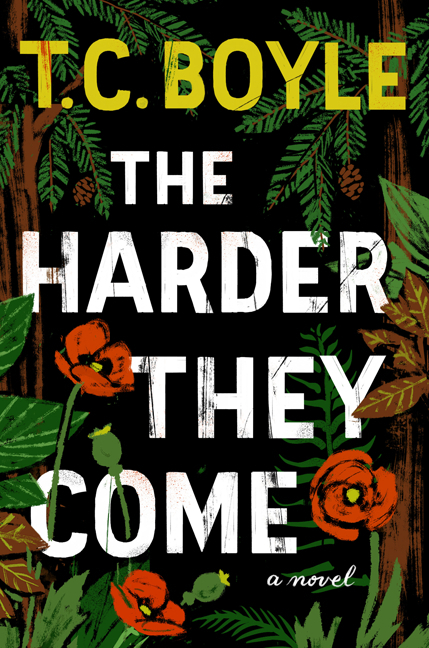 Though some would struggle to cohesively intertwine the lives of a retired ex-marine accidental-murderer, a middle-aged horse-shoeing anarchist, and a mentally-ill mountain-man-less-accidental-murderer, prolific author T.C. Boyle successfully uses such diverse characters to craft a tale that is both exciting and thought-provoking in his new novel, "The Harder They Come". An outrageous testament to Boyle’s artistic prowess, "The Harder They Come" operates on multiple levels that make it appealing. Its fast-moving plot and intriguing cast of misfit characters may appeal to those more interested in a surface-level perusal, but for ones committed to exploring it further, the novel’s deeper themes are both poignant and accessible. Boyle’s characteristic dark sarcasm drips from every word in a way that creates ripples just intentional enough to disturb any internalized seventh-grade-history perception of the American ideal without splashing deep enough to prompt skeptics to dismiss his ironic commentary.

By Courtesy of Harper Collins

Self-proclaimed “sovereign citizen” Sara Jennings refuses to wear her seatbelt as an act of defiance, and the brief incarceration it leads to reveals that for this arresting tale, there are no seatbelts allowed. On the macro level, "The Harder They Come" insightfully examines the changing face of American social reality. It encourages indulgement in enjoyment of its initial violence, and then forces the enjoyers to ponder why they—and by extension, Americans as a whole—so wickedly enjoy its portrayal. Its success in achieving this goal stems partially from the lens through which it examines these themes: namely the protagonists, Sten, Adam, and Sara. Their voices subtly scream for salvation in a battle to maintain their identity in a political, cultural, and physical environment that even their force-of-nature personas can’t quite muscle into submission. Is Sten a heroic retiree or a contemptuous killer? Is Adam a principal’s son in the school where Sara used to substitute teach, or his adopted alter-ego, a companion of Lewis and Clark Colter? It is the subjects of such discussions that wrestle with these questions the most—whether they express this doubt on the page or not.

Boyle tantalizingly refuses to provide direct answers to such existential-crisis-provoking introspections. Although most cannot specifically relate to the mental-health struggles of Adam and Sara, the genius of "The Harder They Come" once again reappears in its ability to serve poignant storylines that address more universal topics like freedom and exploration. Sara’s defiant statement that “you did what you did and you couldn’t have regrets, not in this life that just marched you on toward the grave day by day” could have been lifted straight from the diary of a darkly eloquent and reflective middle-school girl but feels equally at home in the mouth of a dissatisfied, lucidly-delusional adult. Upon his first visit to Sara’s house, Adam listens to her speak and describes her voice as sounding “like a ventriloquist with a dummy in her lap and who was the dummy here, who was the receiver, what was the message?” The ambiguity present in this sentence may prompt a pause of self-conscious melancholy on the part of readers.

In a recent interview with The New York Times, Boyle announced, “I want to get inside the head of every creature in the world.” Though he confines his exploration in "The Harder They Come" to beasts of the Homo sapiens variety, the psyches of the specimens he selects occupy a wide enough range of emotional and temporal states that they, at times, cease to resemble the mold of humanity to which so many literary characters are confined. His fresh characters imbue the novel with a powerful sense of life despite several deaths throughout the course of the narrative. This contrast is intensified by Boyle’s unusual word choices. Those unfamiliar with Local H’s 1996 hit “Bound For the Floor,” for instance, might have to crack a dictionary for words such as “copacetic”—right after listening to the song and reevaluating their taste in ’90s angsty pop-culture, of course. Additionally satisfying is Boyle’s alternation between half-page-long stream-of-consciousness sentences and the three-word fragments that stave off comprehensional fatigue. The novel’s fast pace and sharp wit, combined with its unapologetically odd protagonists, raise questions of whether Boyle was consuming copious amounts of caffeine or something as psychedelic as the contents of Adam’s garden. Whatever his trick is, other contemporary authors would benefit greatly from following suit.

Although on the whole it is aggressively unique, Boyle’s writing style at times is reminiscent of various older literary masters, especially in his use of in medias res. The only potentially off-putting instance of this appears when Boyle dedicates over 60 pages to the initial plotline of Sten’s Costa Rican vacation-turned-manslaughter and then jarringly switches locations and narrator to first Sara and then Adam, both of whose connection to this episode is, at a cursory glance, tentative at best. While the action of the novel’s beginning feels epic and sets the tone for the rest of the novel, its abandonment of this anecdote feels anti-climactic—at least until the next round of action commences. The influence of the only writer Boyle once said he would like to invite to a dinner party, Ernest Hemingway, is evident as well in Adam’s glorification of simple, traditionally-masculine outdoors tasks and the inclusion of sentences whose simple phrasing belies their incisive, between-the-lines commentary.

In the book’s epigraph, Boyle quotes D.H. Lawrence, saying,  “The essential American soul is hard, isolate, stoic, and a killer. It has never yet melted.”  Boyle’s artistic soul is incontrovertibly American in its rugged poise, and as phenomenal as the scientific curiosity “sodium acetate.” Boyle’s essence is like this “hot ice”: hopefully it will never melt. A writer who can make ugly topics and imagery beautiful—a dead man is not a corpse but “an exhausted dance partner”—and violence eerily pleasurable, Boyle once again proves his literary merit in the remarkable tale “The Harder They Come."