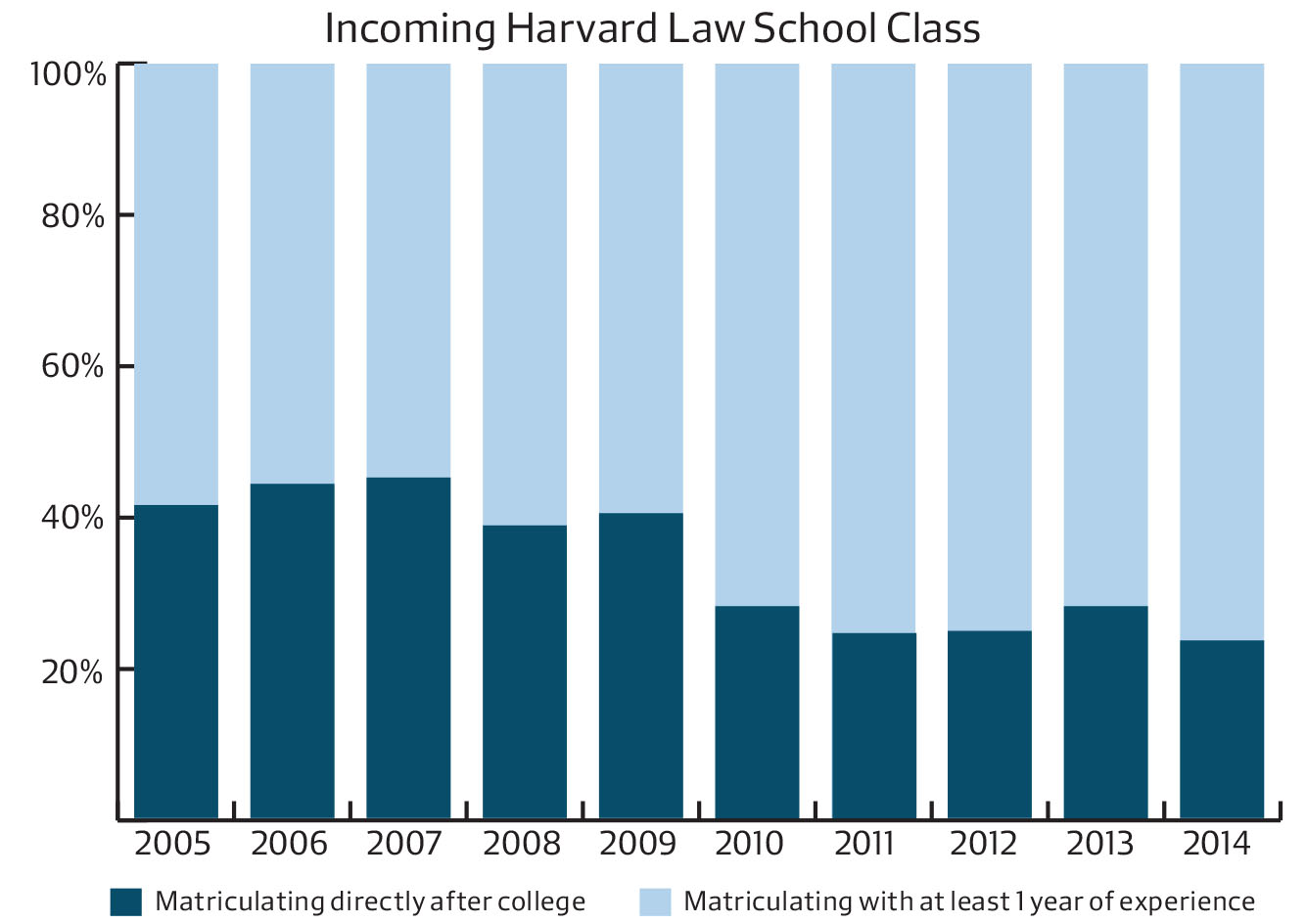 Roughly three-fourths of each incoming class of Harvard Law School students have come to campus with some post-college experience for the last several years.
By Andrew M. Duehren, Crimson Staff Writer

It was the continuation of a years-long trend: From 2005 to 2009, between 39 and 45 percent of each incoming class were just recently undergraduates, with the remainder having spent at least one year working or studying elsewhere. But the next year, in 2010, the young students matriculating straight from undergrad only constituted 28 percent of the entering Law School class. More than two-thirds had post-graduate experience.

Roughly three-fourths of each incoming class of Harvard Law School students have come to campus with some post-college experience for the last several years. By Shivangi Parmar

The change was not a fluke. When Martha L. Minow assumed her position as the new dean of the Law School in July of 2009, priorities, at least in the admissions process, shifted.

“When I became dean, I directed our admissions team to give extra weight to applicants with experience since college,” Minow wrote in an email.

Now, since after 2009, roughly three-fourths of each incoming class of Harvard Law students comes to campus having spent some time beyond their college campuses. It’s a change Minow and Jessica L. Soban ’02, chief admissions officer at the Law School, broadcast as a way to enhance the Harvard Law School experience for students, allowing them to cultivate a better sense of their interests and bring a more experienced perspective to the classroom.

Professors, deans, and students at the Law School largely corroborate this claim, and for the next generation of students the message is increasingly clear: If you want to go to Harvard Law School, it is a pretty good idea—if not an absolute necessity—to get a job first.

For Soban, a former Crimson business editor who has served as chief admissions officer at the Law School since 2012, the emphasis on work experience has shaped the way her office approaches admissions to the school.

“[Work experience] is something we actively preference and look for in the application process,” she said.

In addition to reaching out more to employers and adjusting the rhetoric at information sessions for undergraduates, the Law School has launched new initiatives aimed at bringing an older and more experienced group of students to the school each year.

In 2013, the school launched its Junior Deferral program, in which Harvard College juniors can apply to the Law School under the condition that, if they are accepted, they work for at least two years before coming back to campus. Soban said the launch of the program, which is still in its pilot stage, was “100 percent” part of the effort to bring students to the Law School already having worked for a few years.

Though these recent efforts may indicate otherwise, Soban maintained that winning admission into the Law School is not necessarily more difficult for students coming straight from college.

“For someone who doesn’t have work experience, it’s not harder per se,” Soban said. “But I want to see in an application that you have those same characteristics, and you have that kind of experience and focus, and not that Law School is a default option for you.”

She also said that she encourages students admitted straight out of college to make use of the school’s deferral policy, which allows them to defer attendance a year or two in “almost every situation requested,” Soban wrote in an email.

Soban emphasized that the time between college and Law School is not a “gap year”—she said she wants to see applicants “actually engaging in active employment, or in active graduate study.”

But for others involved in the admissions process, including  Richard J. Lazarus, one of the Law School professors who reviews admissions files and approves admissions, this preference for work experience can boost an applicant’s chance for success.

Employment is not just an advantage in the admissions process; once applicants become students, Law School professors, students, and deans maintain that the benefits of having worked for a few years endure, both in the classroom setting and in the pursuit for a job in the law.

For Law School professor Richard H. Fallon, the difference between students with and without work experience is noticeable: He said that in his experience, “disproportionately the students that I have thought the best and most interesting were students who had some time out.”

“It’s not that this is an absolute necessity for being a first-rate law student, but my experience suggests that it’s a help,” Fallon added.

Work experience can also give students an edge in finding employment after their three years of legal studies, according to Alexa Shabecoff, the Law School’s assistant dean for public service.

“You’re just more more marketable to employers if you have work experience,” she said.

For Mark A. Weber, the assistant dean for career services, the benefit of having worked a few years is less that it gives students an advantage—he maintained that Harvard Law students do well “irrespective” of their previous experience—but that allows students to find a better sense of where exactly they plan to work.

“They have more of a crystallized focus of what they want to do and why they are here,” he added.

A SENSE OF PURPOSE

For Soban and current Law School students, working for a couple of years proves to be an important to shape a sense of purpose for the graduate degree. But in addition to ensuring the Law School does not become a “default option,” students said it has allowed them to better balance the application process and avoid “burnout.”

C. Taylor Poor ’12, a second-year Law School student and pre-law tutor in Eliot House, worked for a mental health advocacy organization for a year prior to law school.

“I think the biggest help for me...was that it gave me kind of a reason to keep going, and a very specific person for why I was at law school,” she said. When she advises students, Poor said she emphasizes the value of this sense of purpose, which often, but not necessarily, arrives after having worked and explored for a few years.

“You don't need law school,” she said. “Law school is a deliberate choice.”

For Taylor A. C. Lane ’11, who is a first-year Law School student and a pre-law tutor in Leverett House, said that work experience helped her to gauge the necessity of the law school degree to achieve her career goals.

“It really tested how much I wanted to go back to law school. And so I think that was very healthy—law school is a big investment. It's a pre-professional school,” she said.

Katherine A. Divasto ’16, a Harvard undergraduate who said that she plans to attend law school but not necessarily Harvard’s, said taking time away from academic pursuits will help her focus on her studies now and her application later.

“I worry that if I were to go straight on it would be a little bit too much,” she said.