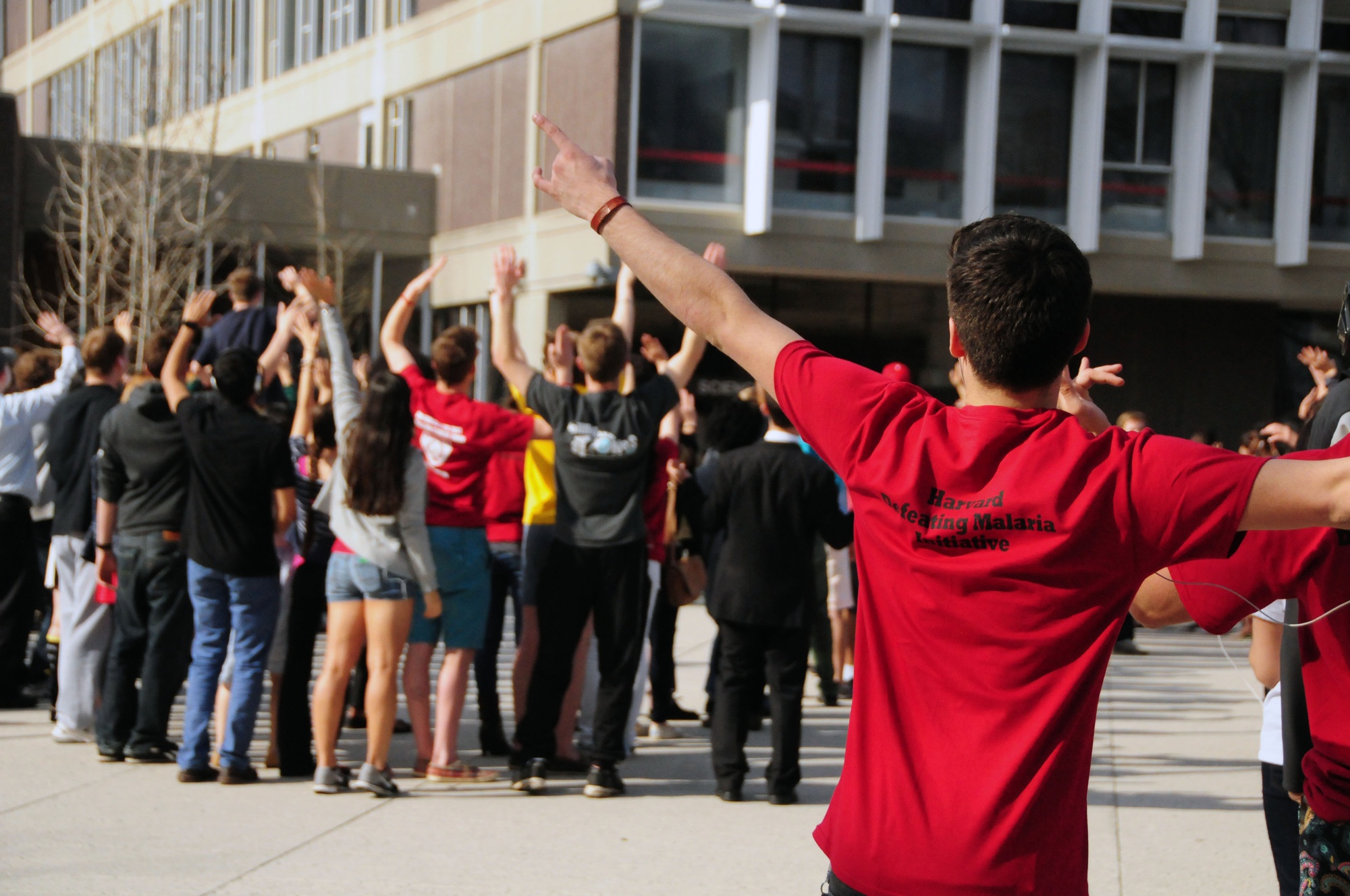 With more than 10,000 glowsticks lying at his feet, Mohammed A. Toure ’16, the co-founder of Harvard College Students Against Malaria, was attempting to break a world record in the Science Center Plaza.

The day, April 25, marked World Malaria Day, an official public health campaign by the World Health Organization that aims to raise awareness and understanding as well as to mobilize support for action for the disease. The day prior, Students Against Malaria organized a panel featuring malaria experts—School of Public Health professors Dyann F. Wirth and Marcia C. Castro and Dr. Stephen L. Hoffman, CEO of Sanaria, a company seeking to develop a malaria vaccine—to discuss perspectives on malaria eradication and innovation to policy.

Armed with a megaphone, Toure called out to passersby to join in the effort to create the world’s longest chain of glowsticks, thereby “shedding light” on malaria, which caused 198 million cases and 584,000 deaths in 2013, according to WHO. 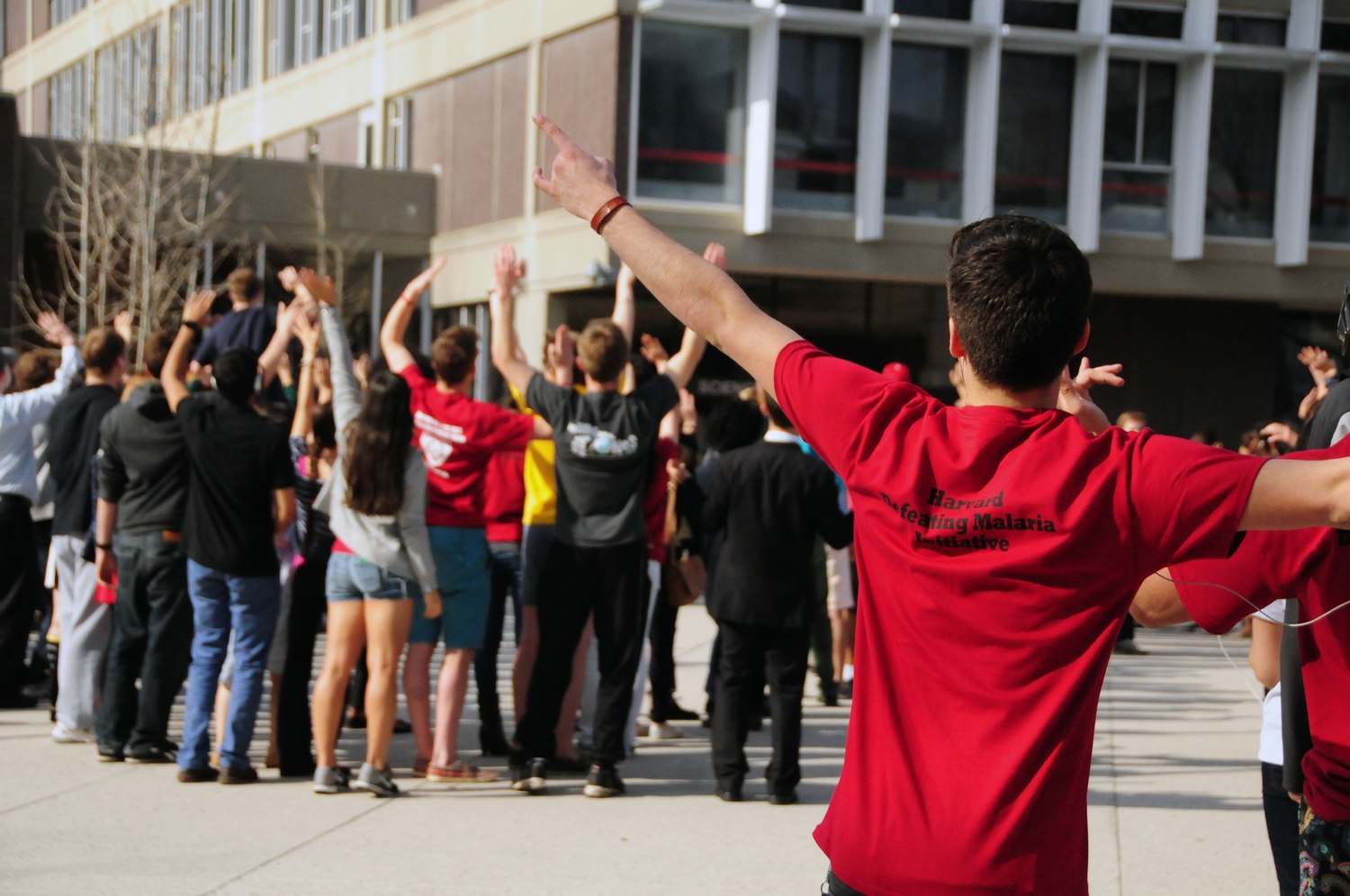 Students take part in a flash mob as part of Mob Malaria on World Malaria Day. By Nayab Ahmad

Toure’s efforts to engage those walking past received mixed responses. While some passersby eagerly joined in, others needed a little more coaxing, as Toure offered free Pinocchio's pizza accompanied with an educational flyer about malaria. Phrases like, “I’m running to something else, sorry,” were frequently used.

The event, called the Harvard One Campaign in recognition that “every minute a child dies of malaria,” highlighted the challenge Students Against Malaria faces in attracting the attention and engaging the efforts of an often pre-occupied and not always informed student body. But with support from the Defeating Malaria initiative, a University cross-school effort in partnership with the United Nations Special Envoy’s office that stemmed from a January 2011 Harvard leadership forum, members of SAM remain unfazed in accomplishing its mission of increasing student body awareness.

Born in Guinea and having immigrated to the U.S. in 2007, Toure said he grew up witnessing those around him become infected with malaria. He matriculated to Harvard motivated to make a difference on campus through a focus on global health issues.

“Having been exposed to health disparities and issues like malaria and having a mom who was a nurse [and] treating people who were suffering from these problems, I thought that could be a space I could really have an impact,” Toure said.

Although many global health organizations exist on campus, such as  the Harvard Undergraduate Global Health Forum, Team HBV at Harvard, and Refresh Bolivia, Toure said he increasingly felt that a student organization specifically dedicated to malaria could ameliorate what he considered the “fragmented” nature of previous efforts to raise awareness about malaria on campus.

“You don’t just want people coming, doing some work, and then that stops. Then another group comes and does something,” Toure said. He added that an organization like SAM would “somehow consolidate that process that would be established on campus, to actually carry out that goal of raising that awareness to the maximum.”

According to its website, the Office of Student Life will recognize a new student organization if it demonstrates “non-duplication of the mission of previously recognized organizations and avoids clear similarity with another already-recognized student organization,” among other criteria. Toure said he found it relatively easy to argue for SAM’s place on campus, pointing to the “precedent” of other clubs, such as the Harvard Cancer Society, that were dedicated to specific health issues. SAM achieved official OSL recognition last fall. 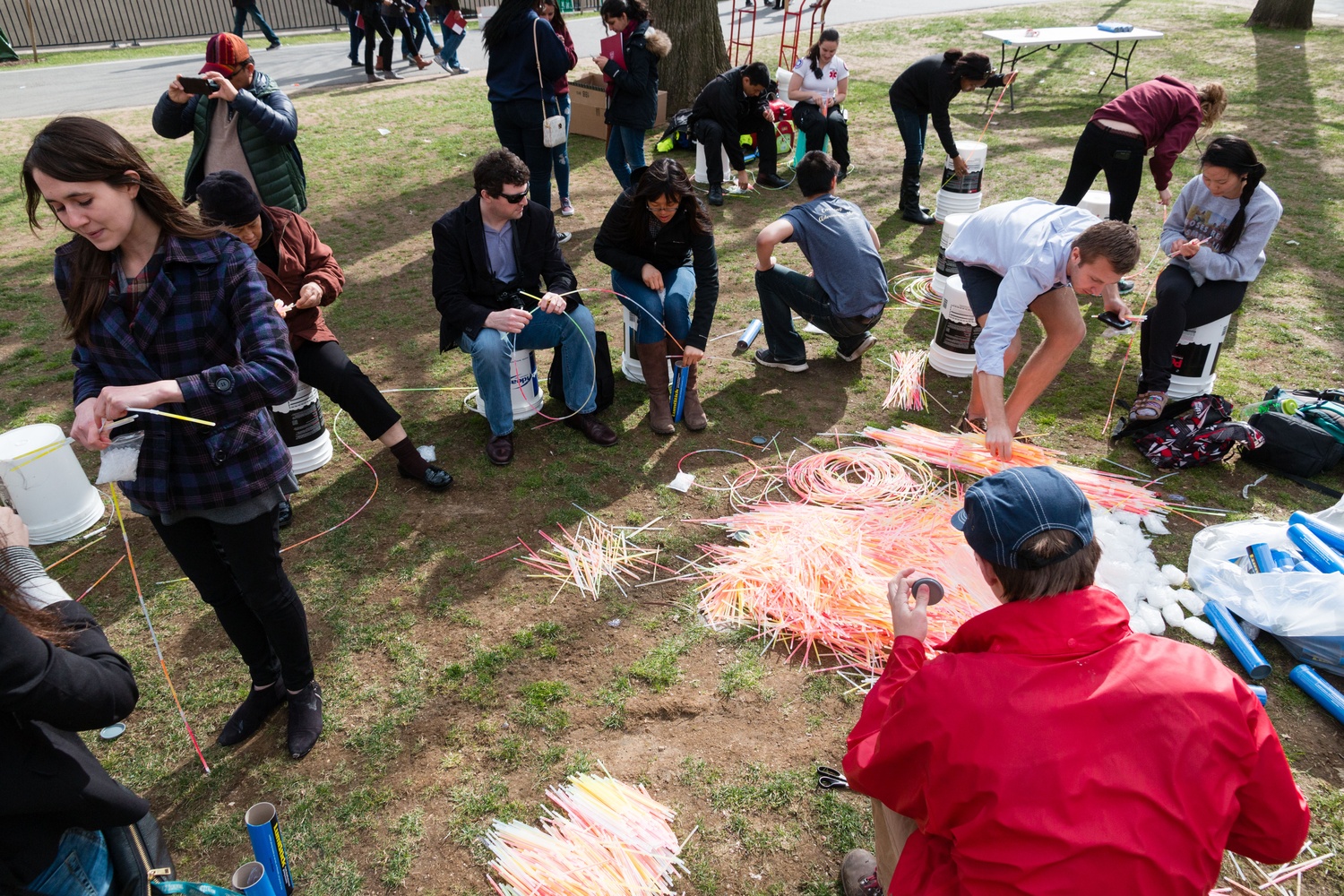 Attendees of the Harvard One Campaign connect glowsticks outside Memorial Hall as they attempt to create the longest chain of glowsticks on World Malaria Day. By George J Lok

However, he did note that the addition of another global health-focused club on campus requires increased communication between them, an issue that particularly arose last fall when many groups organized similar Ebola-centered events.

“There’s a huge issue of collaborating between the global health groups,” Brooks said. “We would be doing something related to Ebola, and there would be another group doing a similar event, and we didn’t know that other groups were doing it.”

On World Malaria Day 2014, Dominic Akandwanaho ’16 wrote an op-ed for the Crimson, entitled “Of Moses, Me, and Malaria,” expressing his frustration as someone who had personally been affected by malaria with the lack of awareness and concern from Harvard students.

“Even at institutions like Harvard, which pride themselves on the curiosity and worldliness of their students, many people ignore this problem,” he wrote.

Tiana J. Raphel ’16, a co-founder of SAM, acknowledged this lack of awareness on campus, including her own misunderstandings of malaria before founding SAM.

“I had the misconception that it had already been addressed, that it wasn’t a big problem anymore. I don’t know where I got that from,” Raphel said. “It’s a challenging process to kind of show people why something is important when they don’t see it upfront.”

School of Public Health professor and Director of the Harvard Malaria Initiative Wirth echoed the sentiment that Harvard students can view malaria as a far-off problem that does not personally affect them.

“Because it doesn’t affect the population, [and] for many students here, they’ve never known anyone that had malaria, so for them, it’s not a personal issue,” Wirth said. “I think caring about something requires that you have some kind of connection...a knowledge-connection is important.”

For her part, Carmen Mejia, executive director of Defeating Malaria, said many students fail to realize what they can contribute to the eradication of malaria.

“We have a lot of really talented people within Harvard, but sometimes people get a little too focused or a little too intimidated by a problem. ‘Oh no, no no, but I’m a programmer, I’m interested in poly-sci, or I’m a historian...I have nothing to contribute.’ But that’s really wrong,” Mejia said.

Unlike some College global health organizations that largely acquire funding from the Undergraduate Council, SAM receives financial support from Defeating Malaria, uniquely positioning it to achieve its goal of student malaria awareness.

According to Toure, Defeating Malaria granted SAM an initial $1,200 in seed funding and another $1,200 to sponsor the “Harvard One Campaign” glowsticks event. The assistance from Defeating Malaria “was something to work with and it was very helpful,” Toure said. He added that Castro serves as their faculty adviser and plays a consultative role, meeting with them as needed.

Members of both Team HBV at Harvard and Global Health and AIDS Coalition, two student-run organizations specifically devoted to a topic in global health, said that they mainly rely on funding from the Undergraduate Council for their events.

“GHAC does not receive any funding from Harvard on an ongoing basis...A lot of what we do is travel for actions and meetings with legislators, for which we have yet to receive funding from the OSL despite applying for travel grants,” said Maria L. Smith ’16, a member of GHAC. “From our vantage point, it seems as though Harvard is more dedicated to funding pizza and chips than to supporting students who are engaged in activism.”

For its part, the Harvard Forum for International Development student group does not receive funding from University-affiliated departments or faculty outside of UC grants, according to Waverley Y. He ’18, HFID’s external relations chair.

“We are currently working on getting grants from the Public Service Network affiliated with PBHA [Phillips Brooks House Association] but have not yet received any support,” He said.

In the end, SAM, in partnership with Defeating Malaria, aims to encourage students to view malaria as a broader problem than just a focus in one specific field like biology.

“When you’re trying to do something like eliminate a disease, then civil society has to play a very important role,” Wirth said.