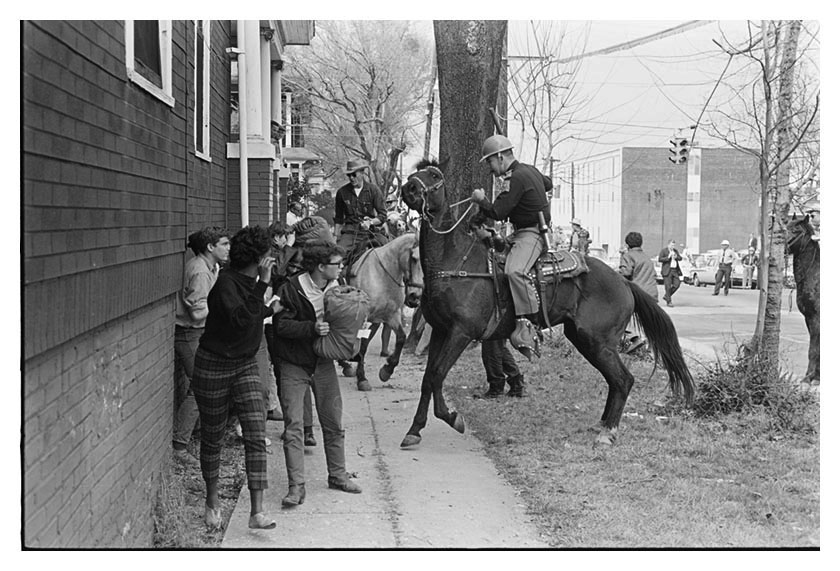 Marshall L. Ganz '64 was one of many Harvard students who found ways to engage in activism while at school in Cambridge, in a community that many described as increasingly supportive of the civil rights movement.
By Emma K. Talkoff

Marshall L. Ganz ’64, then a junior at Harvard, walked into a meeting in Atlanta where he had planned to speak with members of the Student Nonviolent Coordinating Committee.

It was 1964, and amid the ongoing fight for de facto voting rights in the South, the SNCC was developing a relationship with Harvard students involved in civil rights movements on campus as they planned their next move. Ganz was expecting to find a somber scene as the SNCC prepared for the turbulent summer ahead. Instead, the group was engaged in a “preach-off”—competing to see who could deliver the best impression of Dr. Martin Luther King, Jr.

For Ganz, the environment, what he described as the “intersection of pain and hope,” was intoxicating. “There was a joyfulness in this struggle,” he said. “A secondary dimension to it that along with the challenge made it very, very appealing.”

Ganz saw among the members of the SNCC a need for change alongside an excitement for the task ahead, both of which he had not found at Harvard. Ganz returned to Harvard for the rest of the school year, but he would be back in the Deep South before long.

Ganz was one of many Harvard students who found ways to engage in activism while at school in Cambridge, in a community that many described as increasingly supportive of the civil rights movement. But ultimately, the urgency and importance of the work being done in the South drew many from Harvard to continue their activism there.

“My real education about race and politics and power came from Mississippi, not Harvard,” Ganz said. 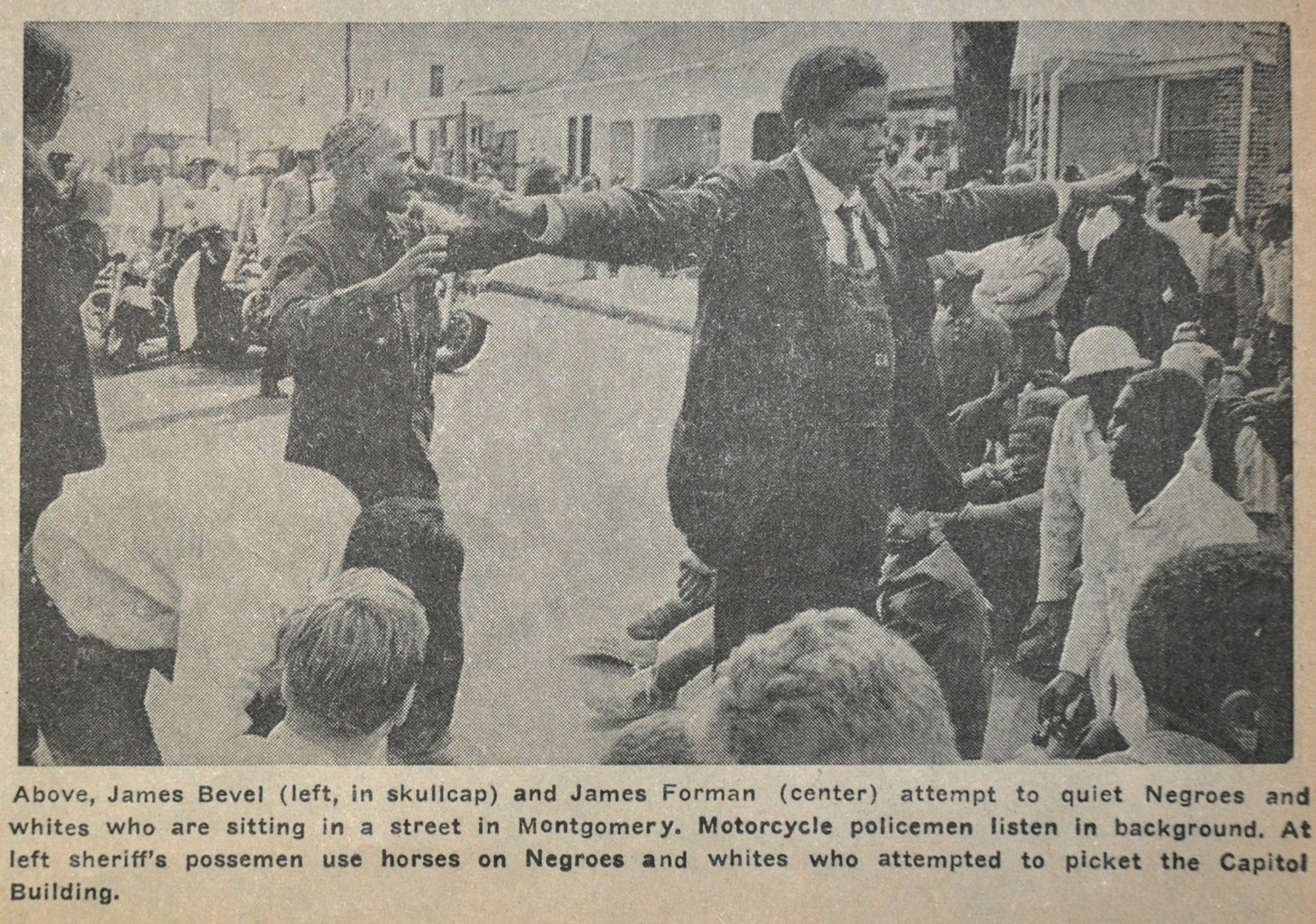 Above, James Bevel (left, in skullcap) and James Forman (center) attempted to calm people sitting in a street in Montgomery, AL. Motorcycle policemen listen in background. At left, sheriff’s possemen use horses to interfere in a picket of the Capitol building. By Glen J. Pearcy

As the SNCC and other groups organized on the ground in the South, civil rights involvement at Harvard was beginning to stir, mostly among a concentrated group of student activists.

“The civil rights movement was just coming into a lot of publicity around the nation, and Harvard students who had social consciousnesses were excited by it and looked to ways that we could get involved,” said Ellen Lake ’66.

Garland E. Allen, who in 1965 was a teaching fellow and senior tutor in Quincy House, described the attitude at Harvard as “quite favorable” to the civil rights movement. Still, for some students, Harvard could not provide the opportunities for activism and change that they hoped to effect in the South.

When the SNCC began mobilizing for the Mississippi Freedom Summer, a movement hoping to bring the Civil Rights Act of that June into de facto acceptance, Ganz’s path was clear: “For me it was like, ‘I need to be part of this. I need to go do that,’” he said.

In the summer of 1964, Ganz, who is now a senior lecturer at the Kennedy School, headed South for what he thought would be temporary involvement. Ganz and around 30 other Harvard students hoped that they as less frequent targets of police violence compared to black Southerners might be able to help the SNCC affect some change.

The night before he was scheduled to join the movement in Mississippi, Ganz got word that three fellow activists in the area had been kidnapped and murdered at the hands of the Klu Klux Klan. After the news of these deaths, the organizer of the group Ganz had joined gathered the students together for a meeting. “I’d like to to be able to tell you [that] you can just go home, you don’t need to do this,” he told the gathered crowd, according to Ganz. “But I can’t. You really do need to do this.”

“That was a moment of silence that felt like a year,” Ganz said. “That’s kind of when you really have to come to terms with, ‘why were you here.’”

Over the course of that summer, Ganz would eventually be arrested some five or six times—but “that was sort of standard fare,” he added.

Lake, who also attended the Mississippi Freedom Summer, was part of what she describes as an “active core” of Harvard students, many of whom had spent the previous year advocating for Harvard to divest from the Mississippi Power and Light Company, whose stakeholders held positions in the unofficially segregated local government.

Following the 1964 Freedom Summer, students at Harvard continued to picket University President Nathan M. Pusey’s office in favor of divestment from Southern companies, but there were not as many opportunities for students and faculty to be directly involved in movements in the South.

SELMA AND THE SOUTHERN COURIER

On Sunday, March 7, 1965, protesters planning to March from Selma to Montgomery, Alabama, were stopped at the Edmund Pettus bridge by state troopers and local police. When the activists refused to turn back, police shot teargas and beat members of the crowd. Coverage of the violence of Bloody Sunday aired for more than two hours around the world, prompting a wave of activists from across the country, including a group of students and faculty from Harvard, to flock to Selma for a second march. 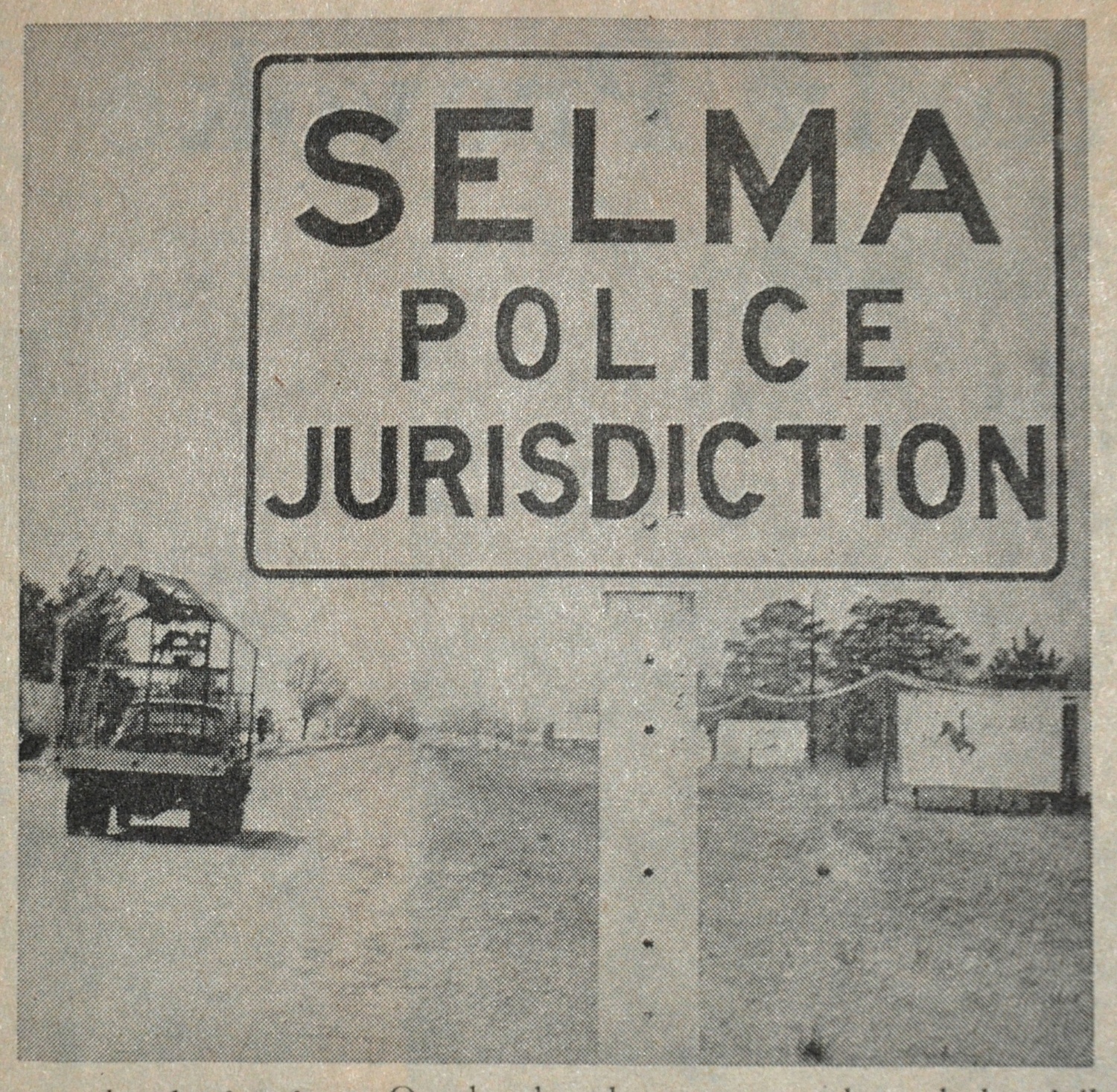 Among those moved by the Sunday coverage was Alvin C. Plantinga ’54, then a visiting Philosophy professor at Harvard. “We saw on television shots of the blacks being savaged and really reprehensible behavior on the part of the Southern police down there in Selma,” Plantinga said.

By Tuesday, Plantinga and a few other faculty and Divinity School students were on their way South. Soon after, a delegation of 30 members of the Harvard community, including Allen, flew down to Selma to participate in the last leg of the march.

As Allen, embarking on his first foray into activism, began what he described as the the hot, dusty march, he recalled seeing police officers and dogs lining the route, a sight which he described as “intimidating.”

But further down the line, the road was flanked not just by police officers but also by supporters, black and white. “That was one of the lessons I learned—how important it is for all sorts of people to work together on these things,” Allen said. “The political lessons that came out for me was that all these kind of issues including the war...have to be joint efforts and can’t be something done by one community alone.” 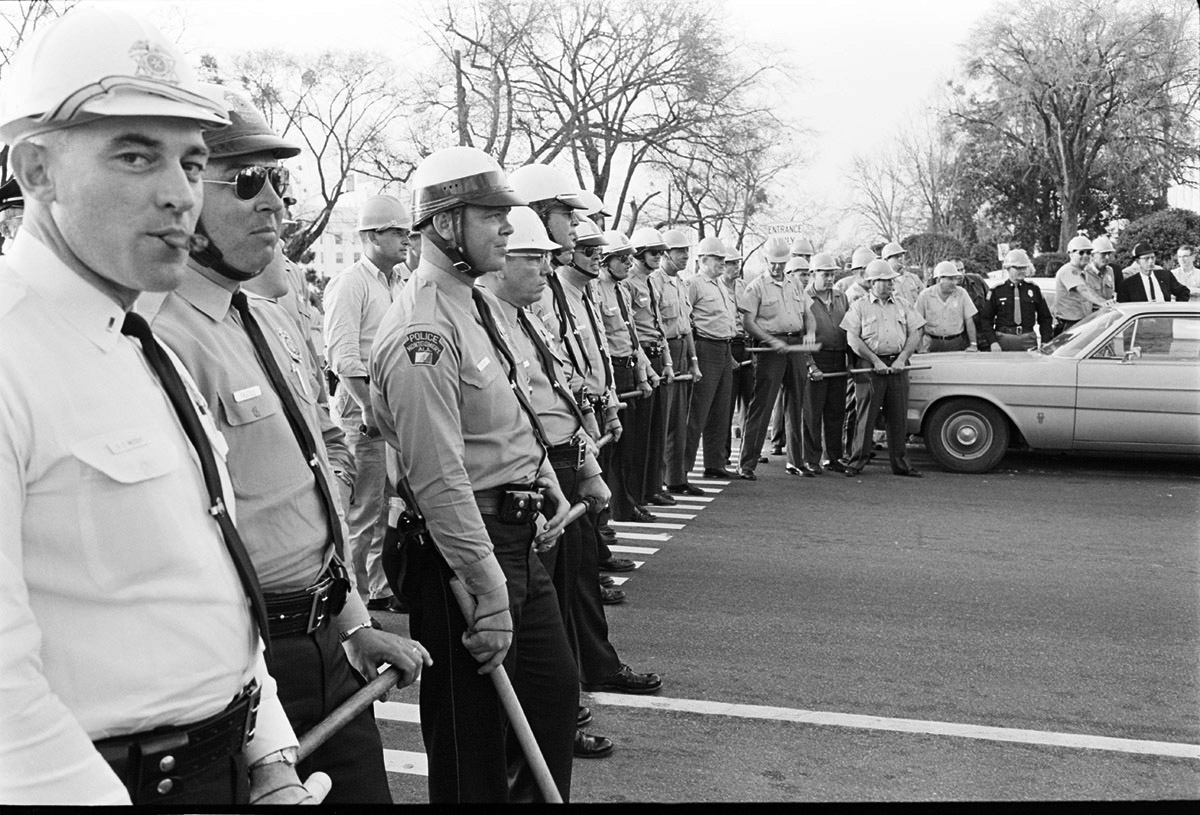 Montgomery police waited for demonstrators on March 17 and 18, 1965 during the voting rights march from Montgomery to Selma. This photograph appeared in The Crimson later that month. By Glen J. Pearcy

By the time he reached Montgomery, Allen said he was no longer afraid. “You could sense the power of the crowd as opposed to a few individuals and that was certainly overcame any real sense of fear.”

As Plantinga and the Divinity students began their march, Plantinga said that they were met with a road lined by white Selma residents wielding sawed-off baseball bats.

“I was to some degree kind of frightened, and I was also thinking we were doing the right thing,” Plantinga said. He recalled one Divinity student—“obviously not the kind of person who had gotten in fights or played football”—who had been terrified by the sight of the bat-wielding crowds. “But he just kept on going anyway, and I admired him for that,” Plantinga said.

As the marches wound down in Alabama, another wave of activism was beginning to mobilize back in Cambridge.

Over the past several months, Lake, a junior at the time, and some friends had been raising money and building a team comprised mainly of Crimson editors to do what no established newspaper dared at the time: cover the civil rights movement from within the Deep South itself.

With fellow Crimson editor Peter Cummings ’66 and the $30,000 the group had managed to raise over the last academic year, Lake set up the Atlanta headquarters of what would become the Southern Courier, a weekly newspaper staffed by Harvard students and local African American students. For Lake, the work was filling a critical void.

“There was no such thing as local papers of the civil rights movement, except if there was a bomb or something there might be coverage, but it was never in the least bit sympathetic. It was always viewed as they, the civil rights people, were the bad guys,” Lake said. “If you were black in Alabama or Mississippi, you were just not in the paper unless you’d committed a crime. And so we were the voice of the black community.”

For Lake and Michael S. Lottman ’61 , who took over the Courier after Lake returned to Harvard for her senior year, the paper also had another function. “Often just having a Courier reporter show up somewhere might be enough for things to change,” Lake said. “Just like good journalism has an impact in changing things, the Southern Courier being an independent and spunky little paper would change what happened.” 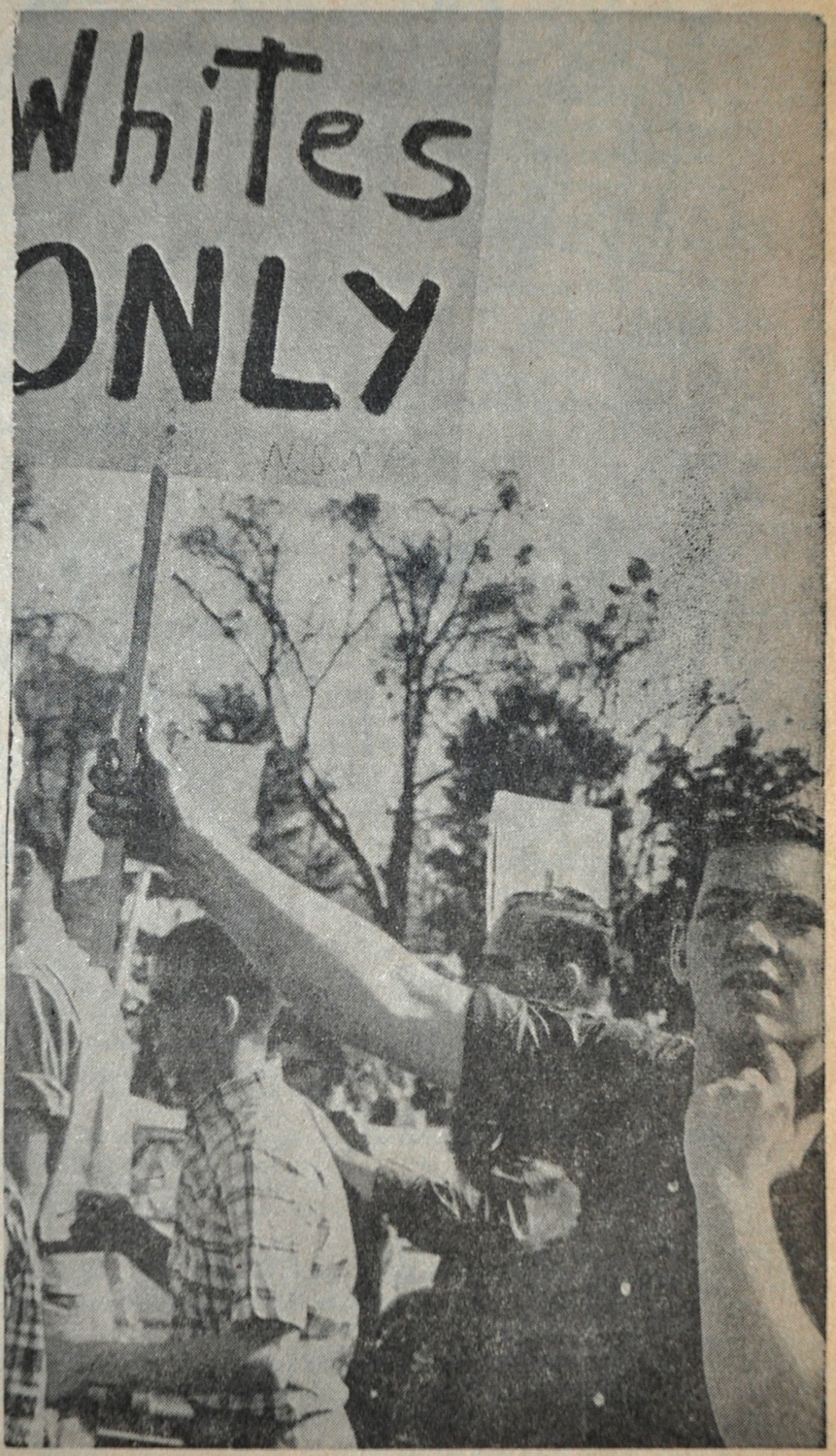 ‘THE WAY THAT THINGS TURN OUT’

In the months after the Selma marches, Lottman continued to steer the Courier through coverage of everything from at least monthly police shootings to speeches by King, in addition to the local Black Panther movement and the Supreme Court ruling on miscegenation laws.

“It affects the way that things turn out,” he said.

After the Courier, Lottman tried to return to a conventional journalism career, but found it a difficult transition. “It was a hell of a lot more fun doing the Courier, and a lot more important, I thought at the time,” he said. Lottman became a civil rights lawyer after studying in Alabama.

After finishing his program at Harvard, Allen moved to St. Louis, where he found avenues to continue the activist work he began in Selma through his involvement in voter registration drives and anti-Vietnam War protests and sit-ins.

“I think it was a legacy of having been involved in the Selma thing that I realized I had to put my money where my mouth was, so to speak,” Allen said. “I felt that the lessons I had learned from Selma about taking part were something I was carrying with me.”

It would be almost 30 years before Ganz would make his way back to Harvard to finish his undergraduate degree after the Selma march. Swept up in the momentum of the civil rights movement, Ganz next headed west to join Cesar Chavez, the founder and leader of the United Farm Workers. Ganz said in a letter to the University that he was not sure when he’d be able to return, writing, “How can I come back and study history when I’m busy making history?” He laughed. “Which was a pretty arrogant thing to say, but it was also kind of true.”