The Other Side of Mt. Auburn Street

The College says no to recognizing final clubs and fraternities, but some social organizations with similar practices are on the books

It’s a typical Saturday night at Harvard, and undergraduates have flocked to Mt. Auburn Street, where parties rage on. Several of the College’s final clubs line one side of the street, known for its concentration of the historic social organizations. In the middle sits a building known simply as “The Castle,” home to the country’s preeminent undergraduate humor magazine and one of Harvard’s most exclusive social scenes.

The final clubs on the south side of the street have a lot in common with the Harvard Lampoon. Both host parties; guest lists often determine which non-members may enter their doors. Prospective members must navigate lengthy processes to gain admission.

But there is one key difference: While final clubs long ago severed formal ties with the University, the Lampoon is officially a recognized student group according to Harvard College.

The Lampoon’s relationship with Harvard’s administration is indicative of the blurred line that determines which student groups may benefit from official College recognition and the perks that may accompany it—the right to apply for funding, reserve rooms, publicize events on campus, and use the Harvard name.

Administrators this year have embarked on a movement to publicly question the role and values of the College’s unrecognized student groups, including final clubs and Greek organizations, led by new Dean of the College Rakesh Khurana and his more vocal approach to the issue. Behind the scenes, he has met with leaders of final clubs and other unrecognized social groups and questioned their practices, particularly the groups whose memberships are single-gender.

But while administrators focus publicly on these groups outside of their jurisdiction, there are others that operate on similar grounds but without the same scrutiny. Despite its stated commitment to the contrary, Harvard recognizes some groups that are effectively single-gender. Other officially sanctioned groups are largely social in function and run competitive processes to determine their memberships. And as administrators increase pressure on unrecognized groups to conform to their definition of inclusivity, some students question whether the College is being consistent—and if it even realizes what goes on within its gates.

THE RULES OF THE ROAD

Last fall, Jimmie Hill ’18 met with College administrators to request that they recognize the fraternity whose presence he recently brought to campus, Delta Kappa Epsilon. Hill hoped he could work with the College to gain the benefits that come with recognition and provide what he believes is a service to campus.

He sooned learned, though, that DKE had no chance of gaining official recognition. Administrators at the College told him that they would not recognize his fraternity, citing the fact that its membership is restricted to men.

That response is consistent with administrators’ public statements about the College’s student organizations, which now number more than 400. On paper, the criteria for official recognition is cut and dry: For a student group to earn recognition today, it must comply with guidelines outlined on the OSL’s website. Some are tangible, such as having at least 10 members, a constitution, and a proposed budget; others are more abstract, such as demonstrating that the group provides benefits to campus, is not a duplicate of a group that is already recognized, and is in “alignment with the Mission of the College to educate citizens and citizen leaders of our society.”

Proposed constitutions must also include a non-discrimination clause stipulating that “membership in this organization shall be open to all students in good standing currently enrolled in Harvard College, regardless of race, creed, color, sex, gender identity, sexual orientation, or physical disability.”

Against the backdrop of recognized student groups are several firmly established unrecognized clubs, including fraternities, sororities, final clubs, and other social groups. Every year, final clubs punch, or put up for entry, hundreds of students. The clubs then winnow down prospective members through several rounds until each admits roughly a couple dozen members.

Most of these unrecognized social clubs are single-gender. In 1984, as administrators became increasingly concerned that the campus social scene was male dominated, the University asked its male final clubs to extend their memberships to women. The clubs declined and effectively severed official ties with Harvard.

Today, when they discuss the final clubs and Greek organizations they refuse to recognize, administrators often cite their single-gender memberships—and criticize them without ambiguity. In 2011, before he became the College’s top administrator, Khurana said he was “always suspicious of a club that builds itself on gendered exclusivity.” In March, Khurana reaffirmed his comments: “The College continues to support the idea that…single-gendered organizations are not appropriate for the College,” Khurana said.

Administrators also speak generally about wanting to combat “exclusivity” in campus organizations. Khurana blasted a controversial party invitation that the Spee Club circulated to some students in March, labeling it “offensive, crude, and sexist.”

Dean of the College Rakesh Khurana has been vocal about his concerns about unrecognized social clubs and their impact on campus. By Jennifer Y Yao

This call from the top for increased critique of campus social life—and particularly unrecognized groups like final clubs—has trickled down. Students are taking note: In April, the Harvard Foundation for Intercultural and Race Relations hosted an off the record conversation about exclusivity in social spaces at the College. Shortly thereafter, anonymous blogs published lists of students they claimed were members of final clubs.

The Crimson is not officially recognized by the College so as to remain independent from Harvard, but it does enjoy some benefits traditionally associated with recognition.

But while administrators suggest that there is a clear definition of which groups are “inclusive” enough to earn College recognition, in practice, the line is blurred.

The College tells fraternities and groups such as the all-female Seneca that it will not recognize single-gender organizations, for example (Associate Dean of Student Life David R. Friedrich, who oversees student group recognition, said he does not remember recognizing a single-gender group in recent years).

Although AAB, founded in 1999, includes a non-discrimination clause in its constitution, the rosters listed on its website indicate that its membership—whom it dubs “brothers”—is all male.

Several members of AAB did not return requests for comment for this story, but its website describes it as a group that “seeks to promote intercultural understanding and social activism at Harvard and beyond” with three pillars of “Service, Activism, and Brotherhood.”

The group’s constitution details the organization’s “fraternal social structure” and lists as one of its codes of conduct to “always uphold gentlemanly behavior.” Membership biographies on its website also allude to the “fraternal” nature of the group: One member, Andy Kim ’17, wrote in a post, which was taken down from the site late last week, that he originally thought of the group as “just another exclusive fraternity” but that he “found that AAB is a group of distinct, yet similar, caring guys who bond together. I learned the purpose of the exclusivity and saw the positive effects of it in the connections between each brother and throughout the brotherhood as a whole.”

Its membership is capped at 40 people, according to its constitution.

Other recognized groups, while not single-gender, also admit very few applicants and have a large social function. For instance, Crimson Key Society, a recognized student group that gives campus tours and coordinates freshman week and parents’ weekends, among other activities, holds various regular social events including parties. Its comp process lasts two rounds, and only a small fraction of students seeking to join the group successfully make it through the comp—generally about 30 of 150 or more compers, according to its website.

According to Undergraduate Council President and Crimson Key Society member Ava Nasrollahzadeh ’16, a factor of what holds the group together is a likeness in personality. Nasrollahzadeh added that members of Crimson Key tend to be “outgoing.”

Besides its parties, the Lampoon—a semi-secret Sorrento Square social organization that used to occasionally publish a so-called humor magazine—is similarly famous for its competitive comp process, which students often enter multiple times in attempt to join the staff. Several Lampoon members directed questions about the comp to president Calvin W. Willett ’16, who did not respond to multiple requests for comment; Friedrich, who confirmed that the Lampoon is recognized, declined to comment on specifics when asked about their comp process and initiations. 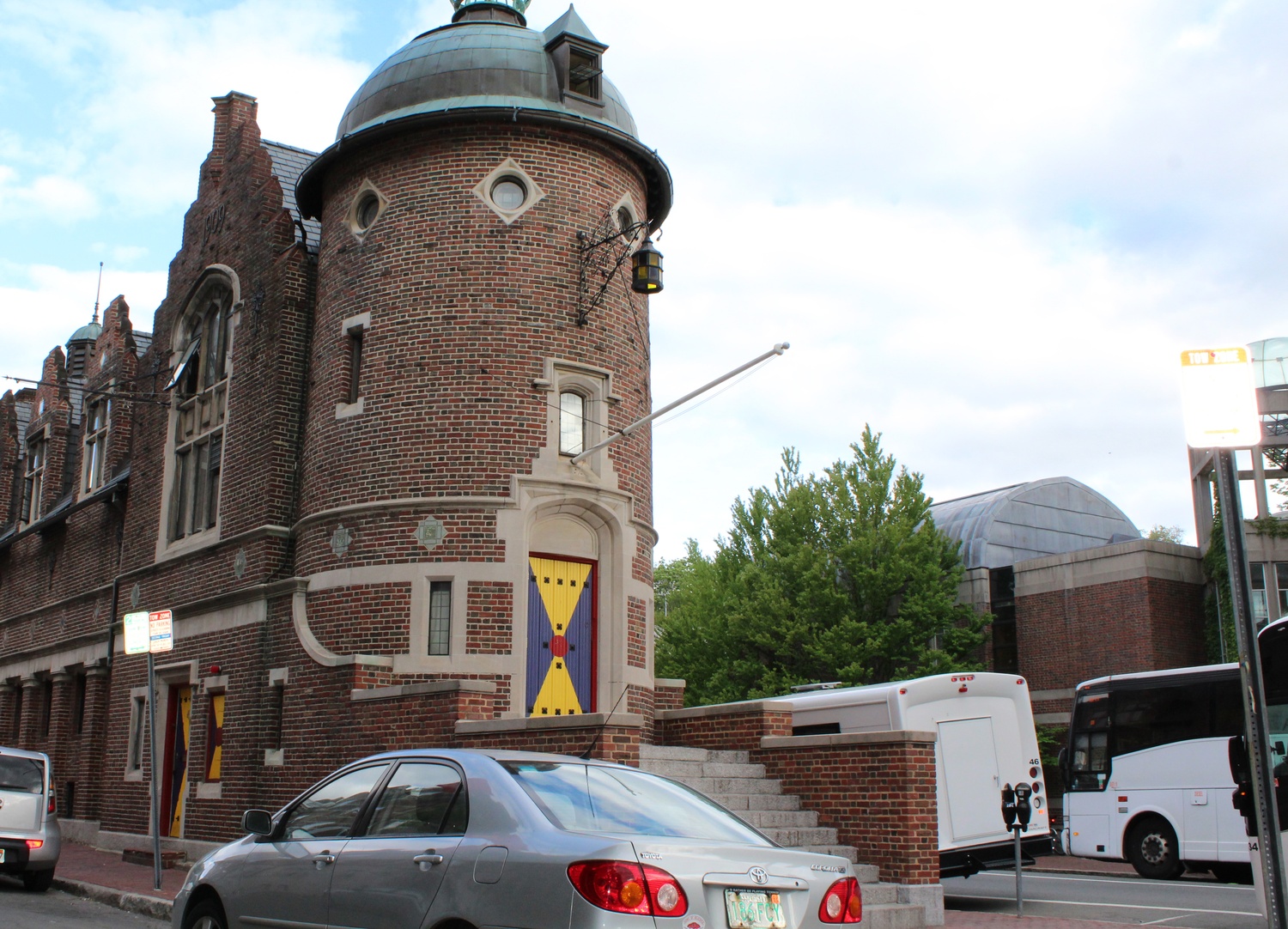 But Jack C. Smith ’15, the former vice president of Harvard’s chapter of fraternity Sigma Chi, described the Lampoon as “a final club” whose members join largely for social reasons and said he believes Crimson Key is primarily a social group.

But with hundreds of student groups under the College’s umbrella, administrators—Khurana included—are not aware of all their practices. When asked to comment on AAB, for example, Khurana said he lacked sufficient prior knowledge of the group and needed to learn more.

Some of the recognized groups that critics label as “exclusive” may have been recognized some years ago. According to Dean of Student Life Stephen Lassonde, there is “history of certain organizations that have been grandfathered in” to recognition. Friedrich said his office periodically checks on constitutions, but that he does not remember revoking an organization’s official recognition in recent years.

The fact that these groups enjoy official College recognition has drawn some ire from members of unrecognized groups. “Maybe the administration doesn't know about what goes on,” Smith said, “but they would have to be, in my opinion, absolutely turning a blind eye to it to pretend that they don't know that these organizations are exclusive or that they have practices which would be highly criticized if they were conducted by another group.”

Jacob T. Bradt ’16, president of the unrecognized Oak Club, has met with College administrators to discuss the social scene at the College and said he appreciates their efforts, but added there may be a certain stigma associated with unrecognized groups. He readily admits he that he views the Oak as exclusive because there is an “evaluative process” that members must successfully complete to join. But he said there are recognized groups that are “equally, if not perhaps more, exclusive” than the Oak.

Friedrich maintains that his office should maintain a relationship and open dialogue with the recognized and unrecognized clubs, as opposed to being a punitive force. “I think that organizational change is a challenge, and our role is to be a resource and a support to students who are thinking critically about how they operate,” he said.

But others call for more drastic change, charging that the College should be consistent in enforcing—and understanding—student groups’ membership rules. Former UC President Gus A. Mayopoulos ’15, who is in the Oak Club, said Harvard should recognize all social groups so it can regulate them. Hill and Smith, both members of unrecognized fraternities, said they want the College to either recognize or not recognize all groups that are single-gender or serve large social functions while only admitting fractions of interested students.

“I’m not necessarily advocating for the University to recognize all of the groups or not recogniz[e] any of these groups,” Smith said, “but I think whatever they do, it should be consistent.”