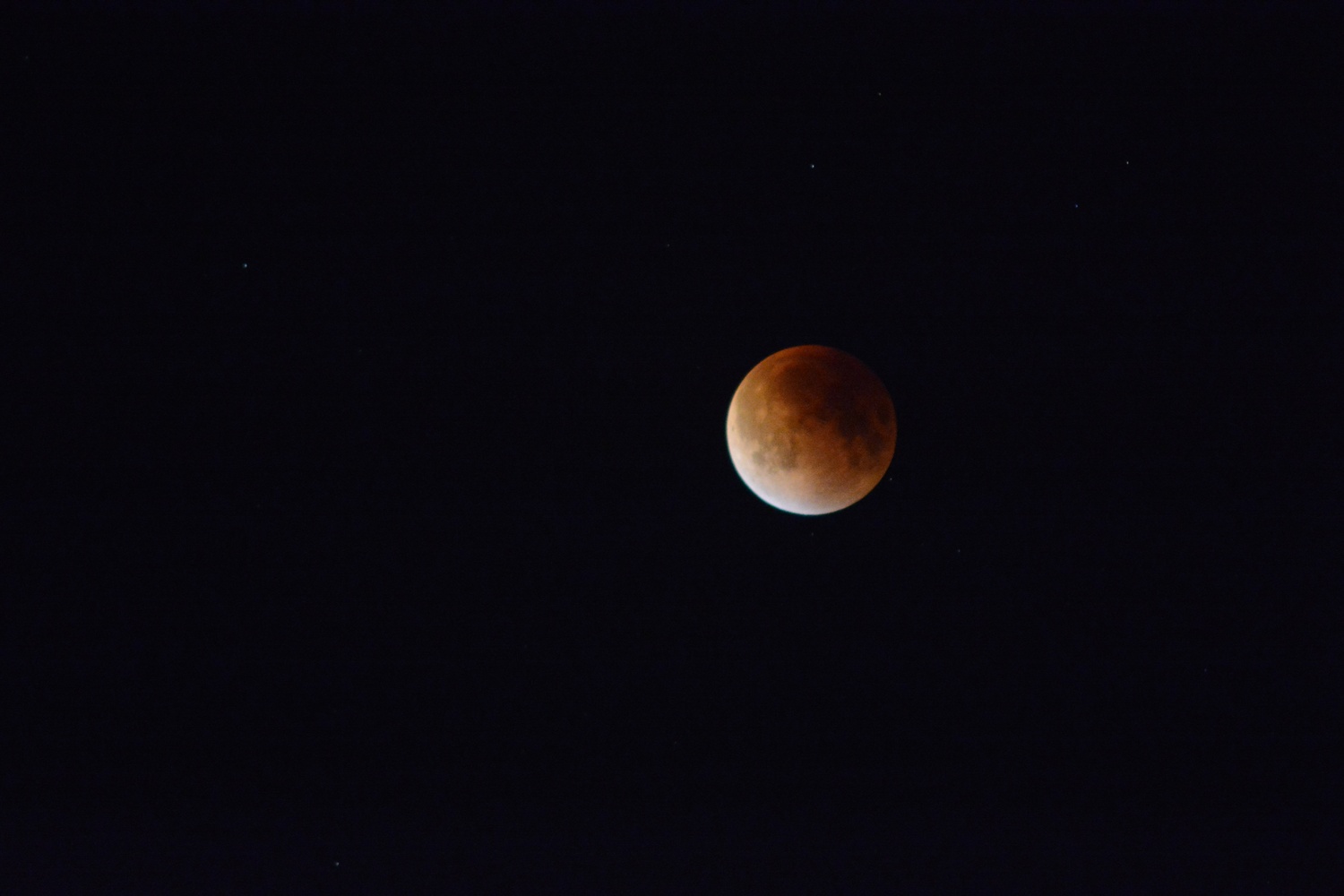 Many people gathered at the Harvard-Smithsonian Center for Astrophysics on Sunday evening to watch the super blood moon, a rare astronomical event. By Ryosuke Takashima
By Kristina D. Lorch, Crimson Staff Writer

Hundreds of students and Cambridge locals gathered around campus on Sunday night to watch a rare astronomical phenomenon that has not occurred since 1982 and will not take place again until 2033.

The super blood moon marks both a perigee moon, when the moon is at its closest point in its orbit to the Earth, and a lunar eclipse, when the sun, Earth, and moon are aligned as the moon passes in front of the Earth’s shadow. During the phenomenon, the moon appears dark red as its surface reflects the Earth’s sunrises and sunsets.

Students flocked to the Astronomy Lab, Clay Telescope, and the Loomis-Michael Observatory at the Science Center for the opportunity to peer through specialized telescopes and binoculars during the super blood moon’s peak from 10:11 p.m. to 11:23 p.m.

According to Chris J. Merchantz ’16, the president of the on-campus organization Student Astronomers at Harvard-Radcliffe, the Loomis-Michael Observatory is typically only open to those who have attended a training class to work with the telescopes and then received swipe access. The observatory was open to the public on Sunday evening.

Harvard staff and faculty also opened up the Clay Telescope, which is normally reserved for academic purposes, on the Science Center’s rooftop for the occasion.

“It didn’t seem fair to not let people come up and get the better view from the rooftop here and take a look through the telescope,” Grindlay said.

Grindlay added that such rare astronomical events brew a lot of excitement about space. More than 200 students cycled through the Science Center Sunday evening, he said.

Eric H. Lu ’17, who visits the telescopes often, added, “This is actually the most crowded I’ve seen this particular place in a while.”

For her part, Allyson Bieryla, manager of the Astronomy Lab and Clay Telescope, was “thrilled” that so many people had come to enjoy this rare event at the Science Center.

“This is what we live for. It’s a great opportunity, and people really get excited about astronomy,” Bieryla said. “That’s what I love about astronomy...in general is it really brings that...love of basic science.”

“[The super blood moon] is totally predictable, and we know exactly what it’ll look like, and we’ve got all these models and everything, but it’s still pretty cool to see this void open up in the sky and [watch it] fill with blood,” Lu said, chuckling.

Students also gathered at Weeks Bridge along the Charles River, in the Quad, and in and around Harvard Yard—at viewing points including The Crimson's rooftop—to watch the moon.

Nikitha B. Reddy ’19 and Ahilya Khadka ’19 soaked up the last moments of the sight in the Yard after returning from the Charles’s banks.

“It was really great seeing a lot of Harvard students down there and watching something happen outside. I think it’s a nice change from being cooped inside,” Reddy said.