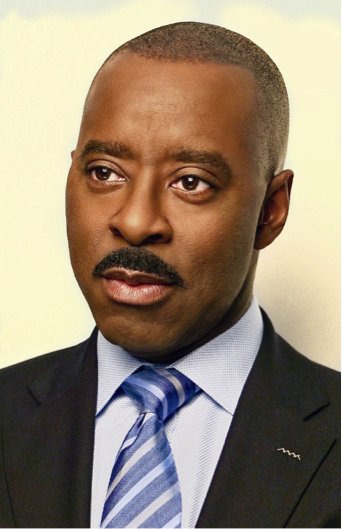 By Courtesy of Courtney B. Vance
By Edward M. Litwin, Contributing Writer

Courtney B. Vance ‘82 is an award-winning actor on stage and screen, with roles in productions including “The Hunt for Red October,” “Fences,” “Six Degrees of Separation,” “The Preacher’s Wife,” “Lucky Guy,” and “American Crime Story: The People v. O.J. Simpson.” Vance spoke with The Harvard Crimson about his path to fame and his time at Harvard.

The Harvard Crimson: What was the big moment in which you realized that acting was something that you wanted to pursue as a career?

Courtney B. Vance: First of all, I had no idea what I wanted to do. That was my journey to Harvard, and I figured that we all didn’t know. I was going there assuming that there would be a bunch of students who didn’t know what they wanted to do, and we would all figure it out together. And so I got there and I discovered that everybody knew in freshman year what they wanted to do, and I was left there. I was on varsity track and I wasn’t doing what I told myself I would do, which was meet new people and we would all figure everything out…. When I made the decision to run track my freshman year, I was with the same group of guys the whole year, which initially was fine; it was familiar, and I played three sports in high school, so I knew the routine, but it wasn’t what I said I was going to do…. So I came back sophomore year and decided to do some shows because I did one small play senior year of high school and I had a lot of fun. I had one line, I think. I did an audition for a show; it was experimental theater and we had a great time. For my second show, I had a great role and a great time and my aunt came to see the show. I’m doing shows just to meet folks at this point, so that I could figure out what I want to do. When she saw the show, she said, “You know what? You may want to think about this as a career! You’re really good!” And that’s when the lightbulb went off. After that it was all about trying to figure out what was the next step. So I started acting in more shows. I did about five shows on campus and then realized it was kind of cliquey there, so I decided I should do more shows in Boston, maybe a workshop, just get some craft and work. One thing led to another, and I was in the Boston Shakespeare Company my junior and senior years…. In the summers I worked for the Shakespeare company in Lenox, Massachusetts, where I did additional training work.

THC: How did you then go into television and film?

CBV: Well, I knew nothing about film. I grew up with theater. My high school teachers would take us to the Stratford Festival in Ontario. Once I figured out I wanted to do theater, I thought about maybe taking a year off, doing some studying, but my parents didn’t want me doing that because it would extend their pay, so I discovered there’s graduate school! I could do graduate school! So then there was the whole where to go and the Yale School of Drama and all that. The hard part was figuring out how to do this knowing my parents told me I couldn’t just study while I was there, and there was no drama major, but there were shows everywhere. On campus, off campus, you could work constantly throughout the city. I rode a bike everywhere because I was totally broke. Once I discovered theater, I was going 15, 16, 17 hours a day, and I had discovered what I thought I wanted to do. It was all because of Lloyd Richards—the dean of the Yale School of Drama—that I got into film. They cast me in “Fences,” and that went everywhere. We went to Chicago, then we were pre-Broadway in San Francisco. Then after I graduated, we all stayed with the show, and we went to New York and it won all the [awards]. It became the biggest straight play by an African American in history. So everyone saw me in that; that was my introduction to the theatrical world. So that set up the filmscape, “The Hunt for Red October,” any kind of TV movie, that was the world’s introduction to who Courtney B. Vance was. It was a wonderful introduction to theatrical society. That’s why I’m indebted to Lloyd Richards for his confidence and for sticking with me.

THC: When you play a role, after the filming or the production ends, what is it like to see a different adaptation?

CBV: I try not to judge. I’ve seen adaptations of “Fences” twice. I saw my wife do it, and I saw Viola Davis and Denzel Washington…. Yale, San Francisco, Chicago, New York, and then to LA: We did five different productions and we knew it inside and out, so anyone that comes to it hasn’t had the same experience. I’ve done it maybe 500, 600 times, so anybody that comes to it after four weeks doesn’t have it the same, and I can’t judge them from where they were. I’ll see the movie soon, I’m sure, but August Wilson plays are very difficult, like Chekhov plays. It sinks in; there’s nothing else to do.

THC: How did going to Harvard impact your life and career as a whole?

CBV: It changed my life. My uncle went to Harvard, and I wanted to go since I was eleven. It was a goal, which was a positive thing for a young African American child in the ’60s and ’70s and ’80s and ’90s to be focused on that. I had a lot of relatives there at the time, so there was family…. If everything got crazy for me at Harvard, I could always just get on my bike and go to my aunt’s house and hang out and get a real perspective. My family was all about education, and me being there was a combination of my parents instilling in my sister and I that this was the ticket to wherever you want to go in life—education. And that’s what I tell my children: You’ve got to work now, play later. You’ve got to get to the place where when you’re a senior in high school, you’ve got choices; you’ve got to put in the work. From an early age, [my sister and I] spent a lot of time at the library because there were no computers back then, and if you had homework to do, you had to go there to do your research (not so much today). But Harvard was transformational for me because I discovered acting there. I discovered the Boston Shakespeare Company and a lot of my contacts that eventually I kept up with through to today, and now I’m a big supporter of the school. I love going back, and I love interviewing students. Today, it’s a transformational place. I graduated in ’82, and every day there were different things going on—they were putting in the Red Line—and it was such a great place to be and to go to school.