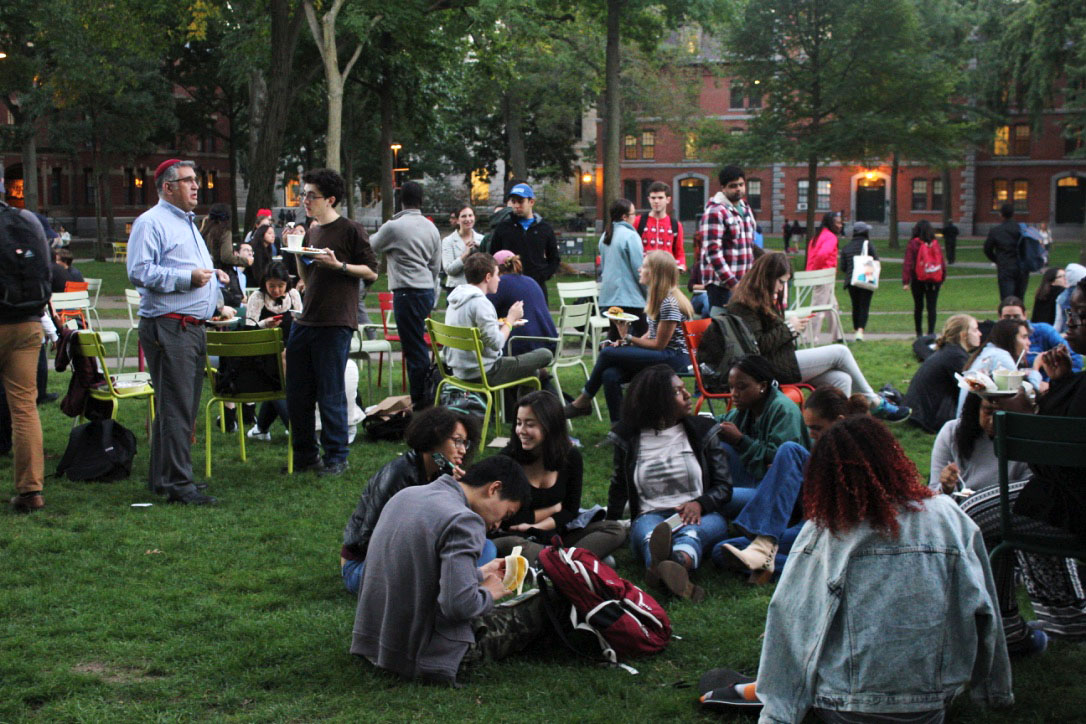 Harvard’s dining services workers have been marching and banging drums throughout their historic strike over the past two weeks, and one group of students has taken up the workers' cause with equal gusto.

Harvard's Student Labor Action Movement—a group of undergraduates that advocates for workers’ rights—has coordinated student support for the dining services employees as they demand to retain their current healthcare plan and higher wages from the University.

Students show support for striking HUDS employees by eating dinner in Harvard Yard in early October. The dine-in was organized by Harvard Student Labor Action Movement in support of the HUDS workers' ongoing strike. By Aridenne A. Dews

SLAM members have been a noticeable presence throughout the strike, circulating email petitions, organizing a student walkout, and inviting thousands of students to strike-related Facebook events.

However, some students have questioned the group’s methods, arguing SLAM’s efforts have stifled debate across campus and drawn focus away from the workers themselves.

In the past, SLAM has been an active presence in labor organizing efforts, previously participating in the “Fight For 15” campaign to raise the minimum wage and supporting the unionization of hotel workers on Harvard-owned property. The group has also actively supported HUDS employees, working since September to raise awareness for the HUDS workers’ causes.

The group has consistently criticized the offers Harvard has made in its months-long negotiations with the dining workers and UNITE HERE Local 26, the Boston-based union representing HUDS employees, writing in a Harvard-wide petition that the University “consistently fails to look out for its lowest-paid and hardest-working employees.” The group has also taken on the role of the strike’s unofficial student public relations department, frequently sending out mass emails including one that characterized an administrative update email as containing “false comparisons and deceptive statistics.”

SLAM members have voiced similar sentiments throughout the strike, which will enter its 15th day on Wednesday. They have repeatedly emphasized that the University’s offers, as they stands now, do not properly take care of workers.

“We’re a community, and we stick up for each other,” said SLAM member Gabe G. Hodgkin ’18.

Some students, however, see SLAM as intolerant of viewpoints that look negatively upon the strike.

Peter Wright ’19, for example, said he found the student body, including SLAM, to be guilty of stifling alternative opinions. He also characterized the workers’ strike as “completely ridiculous,” adding that HUDS workers enjoy wages relatively high for those in food service.

“I have a lot of issues with SLAM, and that is definitely one on the list,” he said.

Similarly, Declan P. Garvey ’17, president of the Harvard Republicans, was critical of SLAM’s tactics in garnering support for this month’s protests.

“I think the loudest people in the strike are the SLAM members, and I think you can assume that’s the overwhelming consensus on campus,” Garvey said. “I think if you actually lay out some of the facts, you can see that there are people who are not vocal on either side.”

In addition to those criticisms, others have said the group may be putting too much focus onto the needs and role of students in a conflict centered around workers and Local 26.

Brittany L. Wang ’17, Quincy House Committee co-chair, said while the student demonstrators have been generally successful at raising awareness, “this battle is not really about the students.”

“I think students can definitely keep the morale up, but ultimately the fight doesn't have anything to do with students,” Wang said.

Hodgkin said that his discussions throughout the strike have been respectful and understanding of all attitudes. “I would say that we really want this to be a respectful community,” he said.

Throughout the strike, SLAM has organized a handful of events to get students involved. In addition to their previously mentioned efforts, they have organized a series of rallies, a “dine-in” demonstration, and launched a phone and email campaign urging students to personally contact members of the Harvard Corporation, the University’s highest governing body, with their concerns.

Hodgkin said he thought SLAM’s efforts were largely successful—the group’s rallies and other demonstrations have garnered hundreds of student supporters across several Harvard schools, and according to Hodgkin, workers and union members have been grateful and enthusiastic about students’ role in the strike.

Grace F. Evans ’19, another SLAM member, emphasized that the group's upmost priority during the strike remains advocating for the workers themselves.

“It’s absolutely essential that the focus of the strike remain on the workers,” Evans said.

—Staff writer Jalin P. Cunningham can be reached at jalin.cunningham@thecrimson.com. Follow her on Twitter@JalinCunningham.