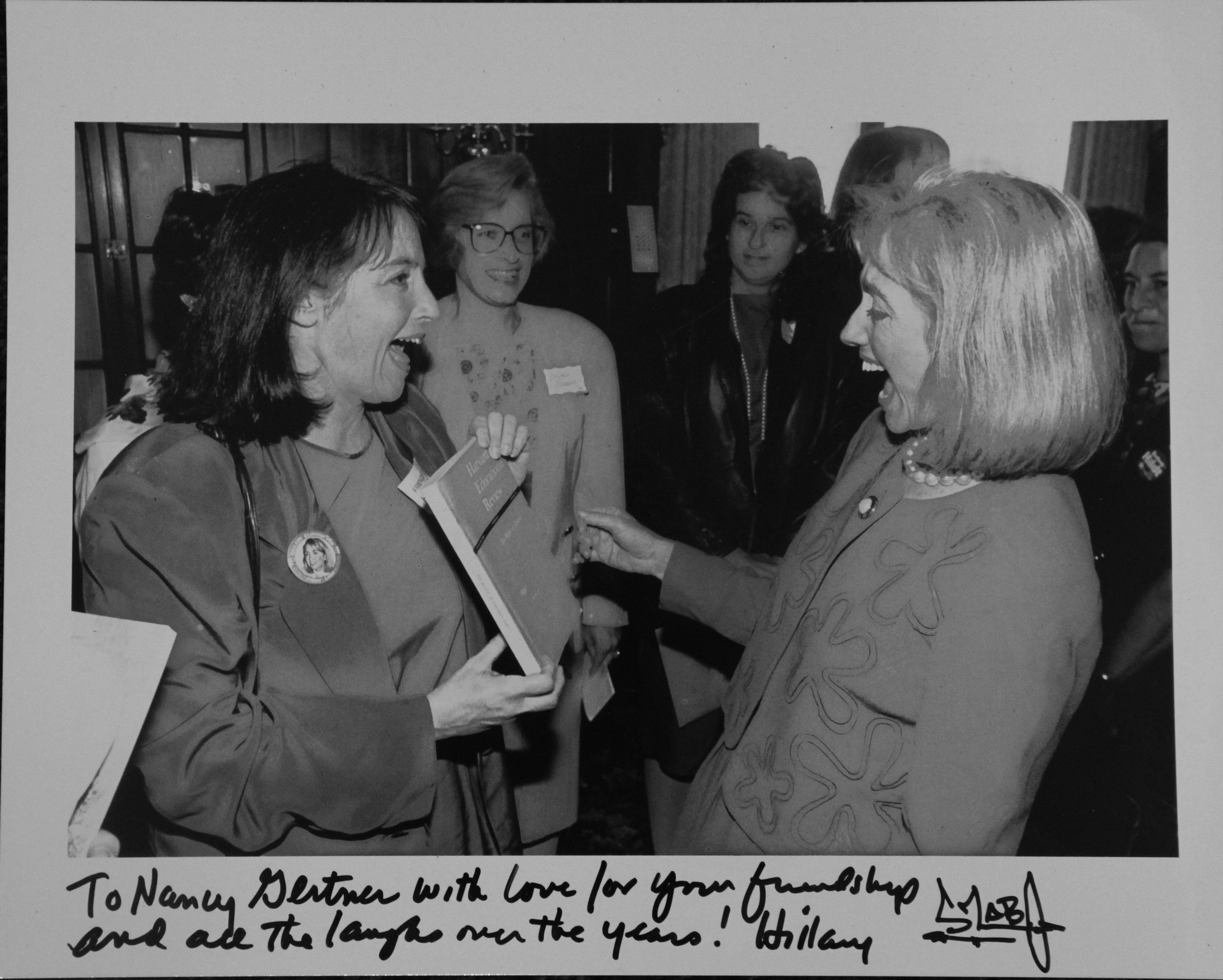 Judge Gertner poses with Hillary Clinton as Clinton holds up a copy of the roughly 350-page report she helped write while working for the Children’s Defense Fund in Cambridge, Massachusetts. By Isabella S. Beroutsos

Nancy Gertner spent many nights chatting over steaming cups of tea in Hillary Rodham's small apartment in Watertown, Mass., in 1973.
By Hannah Natanson

It may be hard to picture Hillary Rodham Clinton having a tea party.

Leading the Democratic party, sure. Navigating a tense dinner party with foreign dignitaries as Secretary of State, absolutely. Maybe even taking a twirl at her own inaugural party. But a tea party?

Nancy Gertner, an old friend and Yale Law School classmate of the Democratic presidential nominee, says she spent many nights chatting over steaming cups of tea in Rodham’s small apartment in Watertown, Mass., in 1973, as the clock ticked toward dawn. Gertner and Rodham—fresh out of law school—were both working in the area, Rodham in nearby Cambridge.

“Let me set the stage,” Gertner says. “Hillary and I are both workaholics, and we would have tea at midnight or at 11 o’clock when her day was done and so was mine, and we would talk about our dreams.”

Gertner, a faculty member at Harvard Law School, says Rodham was far from sure what those dreams were. According to Gertner, Rodham’s temporary living arrangements (she was subletting her apartment) reflected her “transiency.”

Rodham faced a dilemma: Should she settle in Massachusetts or join boyfriend Bill in Arkansas, where he hoped to one day launch a campaign for governor? Should she make the move to bolster his career—or stay and focus on her own?

She had come to Cambridge to work for the Children’s Defense Fund, a nonprofit organization dedicated to child advocacy and research. Rodham’s first assignment, to produce a report explaining why nearly two million American children were failing to attend school, demanded almost all her time and attention.

But intense was just how Rodham liked it.

She was a “crazy maniac,” Gertner remembers, so devoted to her work that she had no time for regular, sit-down meals.

“[Rodham was] enormously idealistic, enormously committed,” Gertner says. “I don’t think I can convey the extraordinary sense of idealism that many of us, that she and I felt at the time. It was not just the excitement of embarking on a career… it was embarking on a career at a time when there seemed to be major social change.” 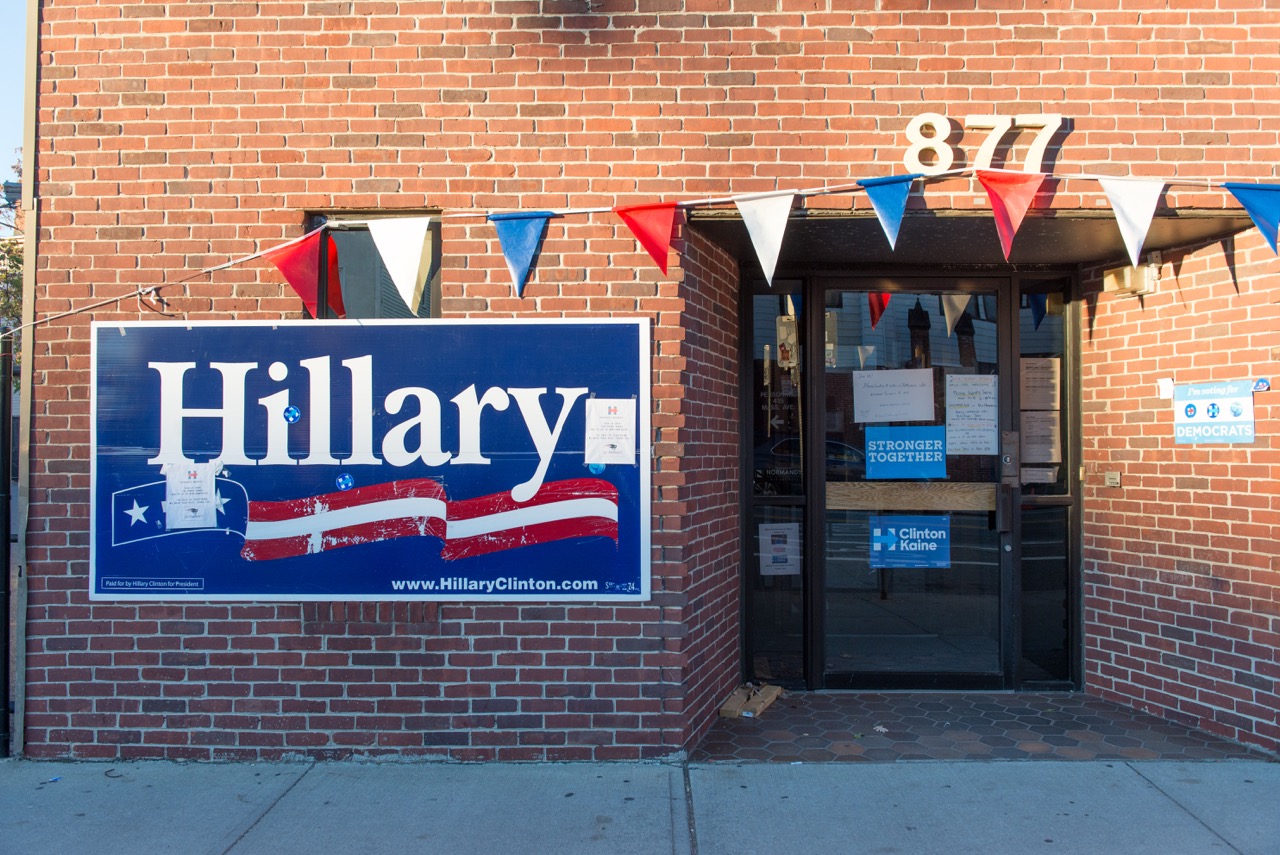 In the early 1970s, Hillary worked in Cambridge for the Children’s Defense Fund, a non-profit organization dedicated to child advocacy and research. By Alana M Steinberg
Advertisement

Gertner says she and Rodham were “children of the second wave” of feminism; Betty Friedan published “The Feminine Mystique” in 1963, just 10 years before both began their professional lives. The two friends fantasized “not only about the house and home” but about their careers. “Those were new dreams,” Gertner recalls.

“The discussion about work and career was like no discussion she or I had ever had with our parents or our mothers,” Gertner says. “My mother was a stay-at-home mom and her mother was… as well. The richness of our conversations was sort of parallel to our sense of womanhood at that time.”

Despite their lofty career goals and Ivy League credentials, Gertner and Rodham could not resist a little gossip. Mixed in with weighty discussions of politics and law were the sorts of exchanges you might hear in any woman’s college dorm room at 2 a.m. As Gertner recalls, the duo often sat­­ on Rodham’s floor, evoking the intimacy of a child’s play date.

“I remember sitting on her floor, drinking tea, and talking about the usual things that women of our age talk about, which is men,” Gertner says. “I would talk about whoever my boyfriend was at the time, I don’t even remember, [and] we would talk about Bill.”

Rodham was undecided about her career path, but Bill already knew what he wanted to do—and he wasn’t shy about admitting it.

Gertner remembers once traveling with Rodham to a bar in San Francisco to meet Bill for drinks. When the two couldn’t find him, Rodham went to check with the bouncer. (“This was pre-cell phone,” Gertner notes.) She returned confident that Bill was in the building. Gertner—ever the cautious lawyer—wanted to know how Rodham could be sure.

“She said, ‘I just talked to the bouncer. He said he spent an hour talking to someone who will one day be president of the United States,’” Gertner says with a laugh. “So Bill was there.”

The bouncer was right, but it’s possible that he spoke to two, not one, future presidents that night.

This was one topic Gertner and Rodham never broached—not once in all their late-night, tea-fueled talks.

“I can’t say at all that she envisioned, that she talked about running for office,” Gertner recalls. “That was so far from the universe of things that a young woman could even imagine in 1973.”