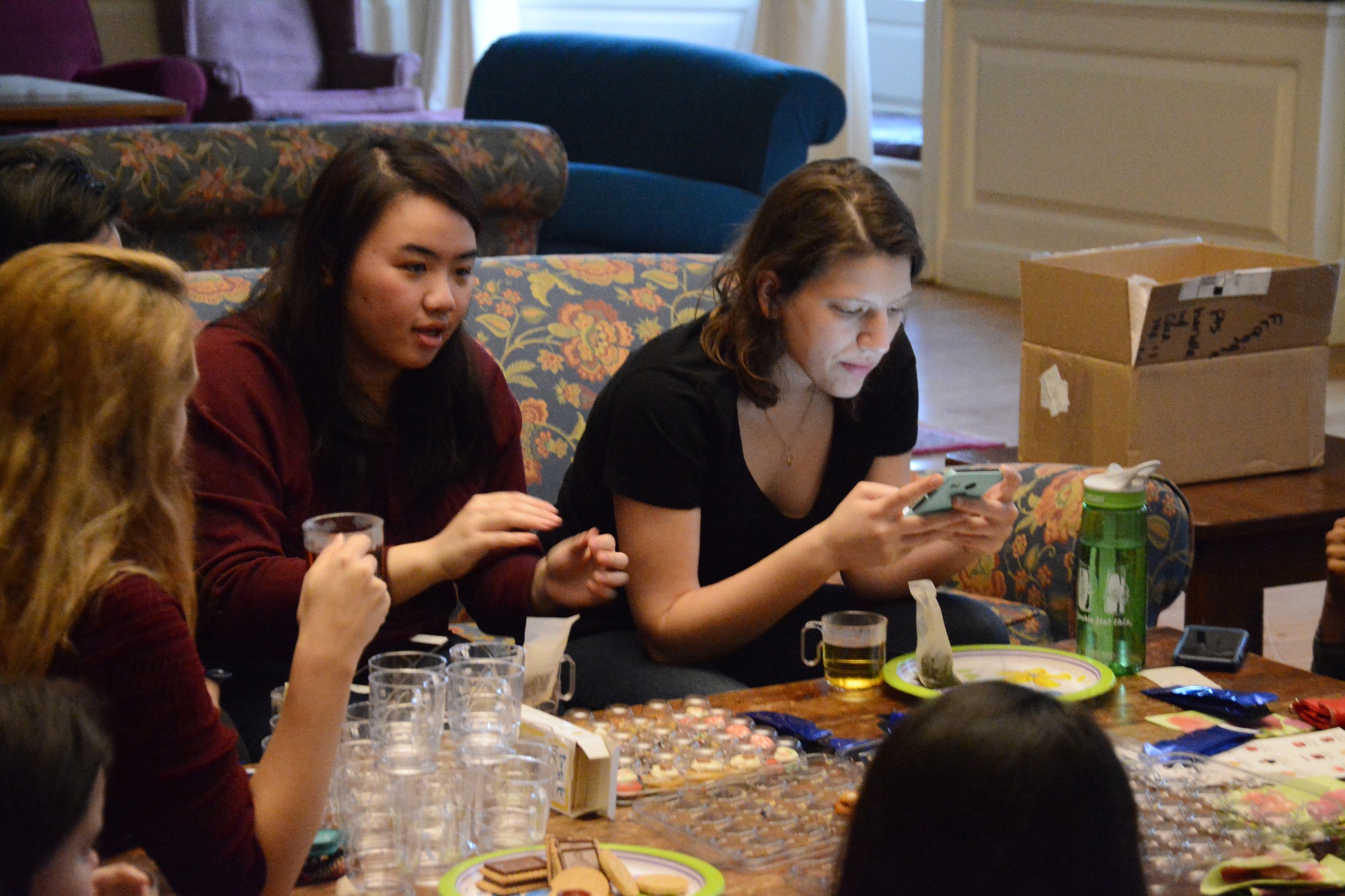 Alexandra Abrahams ’17 does not fit the profile of a stereotypical Computer Science concentrator. A transfer student from Oxford University who had previously studied politics and economics, her academic career took a turn after she came to Harvard and enrolled in CS50, the College’s popular introductory computer science course.

While the fact that Abrahams transferred from Oxford and previously considered studying the social sciences may seem unusual, her gender also breaks the typical mold of a Computer Science student. Male students outnumber female students in CS50 by a roughly 2:1 ratio, and Abrahams said she could “count on one hand” the number of times female students asked a question in lecture. 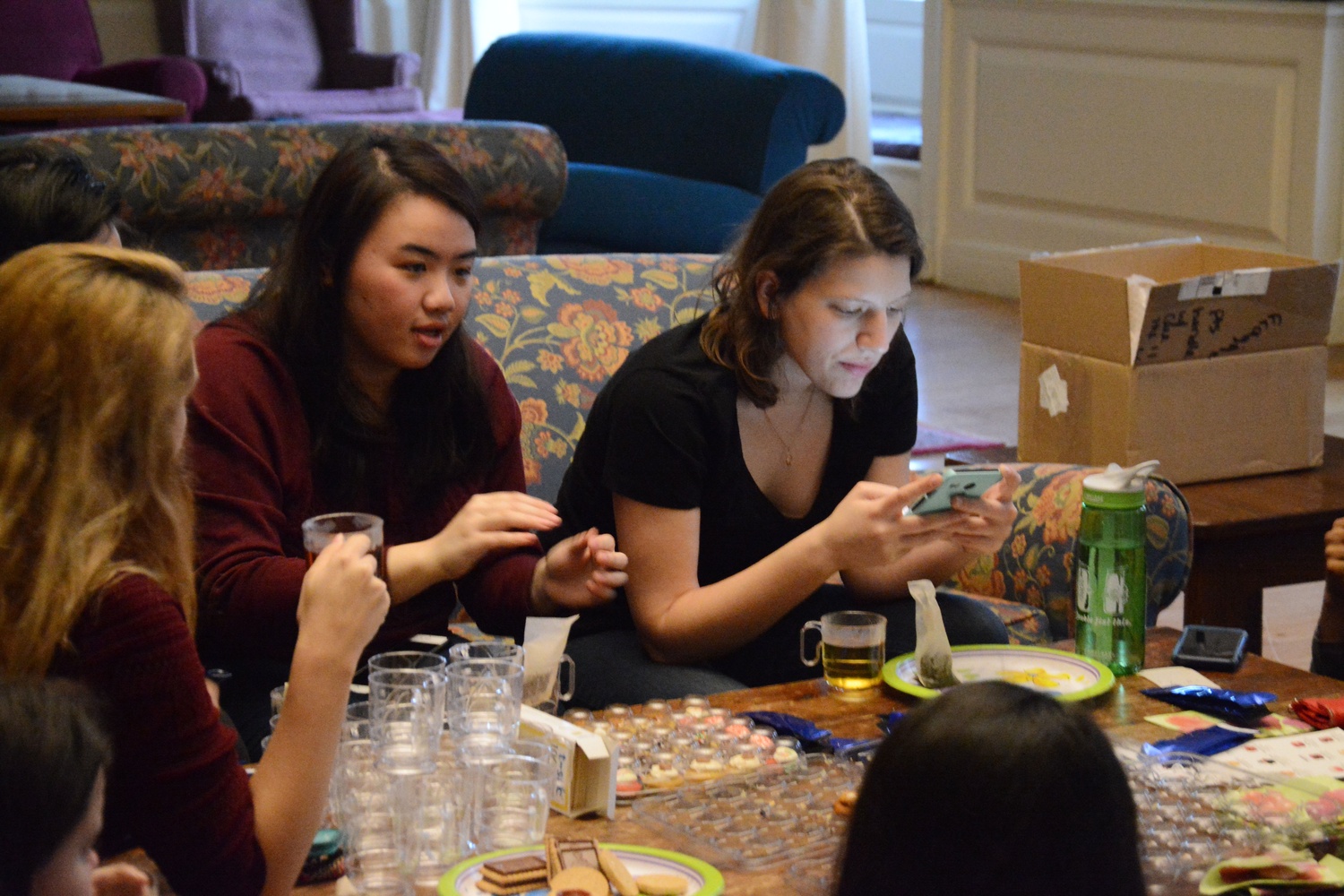 Priscilla W. Guo '18 discusses marriage at a Women in Computer Science Mentorship Tea Party in Lowell JCR last Wednesday evening. WiCS hosts a series of events throughout the semester for fostering a community of technically-skilled women. By Suproteem K. Sarkar

In the midst of Harvard’s significant financial investments in engineering and applied sciences, the University faces a stark gender inequality across SEAS, mirrored in its Computer Science Department. There are 87 female Computer Science concentrators at Harvard compared to 262 male concentrators, according to Paul Karoff, a spokesperson for the School of Engineering and Applied Sciences. Still, Harvard has begun to focus on bridging the gender gap and encouraging more women like Abrahams to join a field rapidly increasing in popularity.

“The problems of women and tech [begin] long before women enter college,” Abrahams said. “I think Harvard is doing a great job.”

Although Abrahams said she found CS50 was dominated by male voices in the classroom, she thought the class material was engaging and said external social support structures gave her a crucial sense of community. While female Computer Science concentrators are significantly outnumbered by their male counterparts, both at Harvard and nationally, a committee at SEAS was recently appointed to investigate and increase diversity within Computer Science.

Outside the classroom, organizations like Women in Computer Science and recruiters at major tech companies have also made conscious efforts to hire more women and decrease the gender imbalance within their own workplaces. 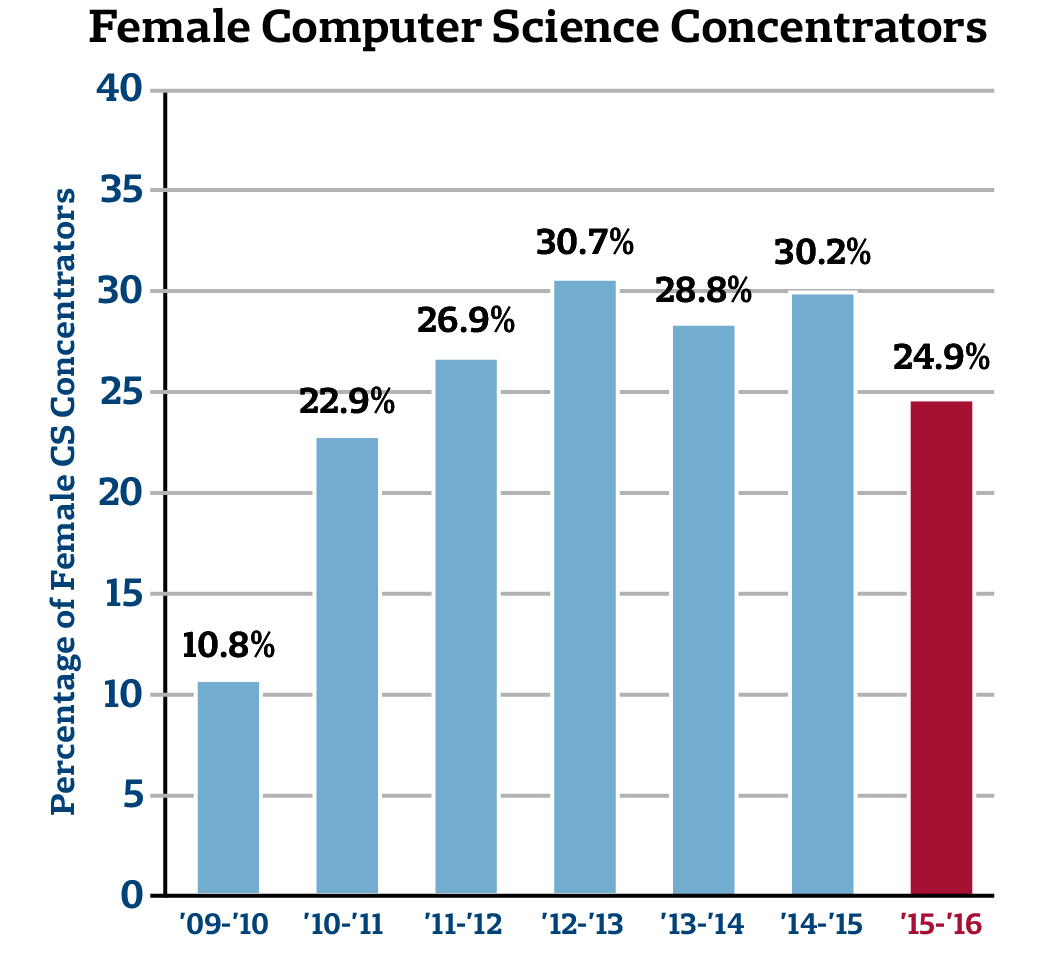 The department still faces a stark gender imbalance, but the number of women Computer Science concentrators is gradually increasing. At SEAS’s inception as a formal school in 2007, women constituted little more than 18 percent of the department. Today, that number is roughly a quarter.

“I would love to see our numbers be 50-50,” Computer Science professor Margo I. Seltzer ’83 said.

“The guys around me seemed to know more about CS than I did,” Hwang said. “For me as a girl, no one had ever talked to me about CS going in. I already felt behind.”

More broadly, students said there exists a popular perception that careers in computer science are for introverts who spend more time coding in basements than socializing.

Michelle Danoff ’17, co-president of Women in Computer Science, said such a perception can discourage women from entering the field, because they are less likely to envision computer science as a part of their future.

“Breaking the stereotype and getting people to reconceptualize is a huge challenge,” Danoff said.

Administrators said they are aware of the cultural norms that can intimidate female students or make them cautious about entering the field, and are taking steps to actively address them before students even enter Harvard Yard.

The Computer Science Department works with the undergraduate Harvard Computer Society and Women in Computer Science to contact admitted freshmen who indicate an interest in studying computer science during their time at Harvard.

“We make sure that everybody gets contacted,” said Computer Science professor Harry R. Lewis ’68, who is currently the director of undergraduate studies in Computer Science. “The women will get two calls, and the men get one.”

The department also recognizes the role of CS50 in encouraging females to consider the concentration, since that class often offers students their first exposure to the subject.

Lewis said CS50 is “shaped by [course head] David Malan’s consciousness by making sure that it is open to women as an academic pursuit and as a career option.”

While there is limited women-specific outreach for CS50, the course’s broader aim to lower the barrier of entry to computer science has encouraged more students to give the field a try.

Initiatives like the introduction of the “satisfactory/unsatisfactory” grading option for CS50, and the unusual allowance to count CS50 if taken without a letter grade for concentration credit, “provid[e] a way into the field with a low-risk first course,” Lewis added.

According to David J. Malan ’99, CS50’s instructor—who surveys his classes for demographic information—the number of women in CS50 has risen from 31 percent to 38 percent since last fall, reflecting efforts to promote gender equality.

Getting more women through the door of the Computer Science department, and into an introductory course, is just the first step in administrative and student efforts to increase the number of women who leave Harvard with a degree in the field.

Undergraduates often cited female mentorship as a key contributing factor to sticking with the concentration past the introductory level. In a department whose faculty is also male-dominated—a significant majority are men, according to the SEAS website—administrators and professors seek to provide more opportunities for female mentorship at present while narrowing the Computer Science faculty gender gap in the long term.

Although the number of women faculty remains low, professors said they are working to increase the pool of potential faculty candidates by hiring more female teaching fellows.

Lewis said the Computer Science Department has been “very conscious in developing the pool of faculty candidates to look for strong women candidates.” In his class, CS 20: “Discrete Mathematics for Computer Science,” four out of seven TFs are women, he said.

Professors without the power to directly hire faculty are individually encouraging female students in the classroom. Seltzer, who also serves as a faculty mentor to Women in Computer Science, said she forms gender-balanced teams in class so that women do not feel outnumbered.

“I think carefully when I form groups,” Seltzer said. “I’d rather have one male group and other groups with a 50-50 split, rather than have groups with only one female in it.”

There is also institutional support for achieving gender balance among students in the department. Two months ago, the department established the Diversity in Computer Science Committee—chaired by professor of the practice James H. Waldo—with the goal of increasing the number of female students entering the department and then retaining them through graduation.

“The good news is that we’re really serious about this, and we really want to make some changes,” Waldo said. “The goal is to make women concentrating in CS feel more at home than they currently do.”

Outside the classroom, social support structures—primarily Women in Computer Science—are instrumental in making sure female concentrators do not feel alone or unsupported. 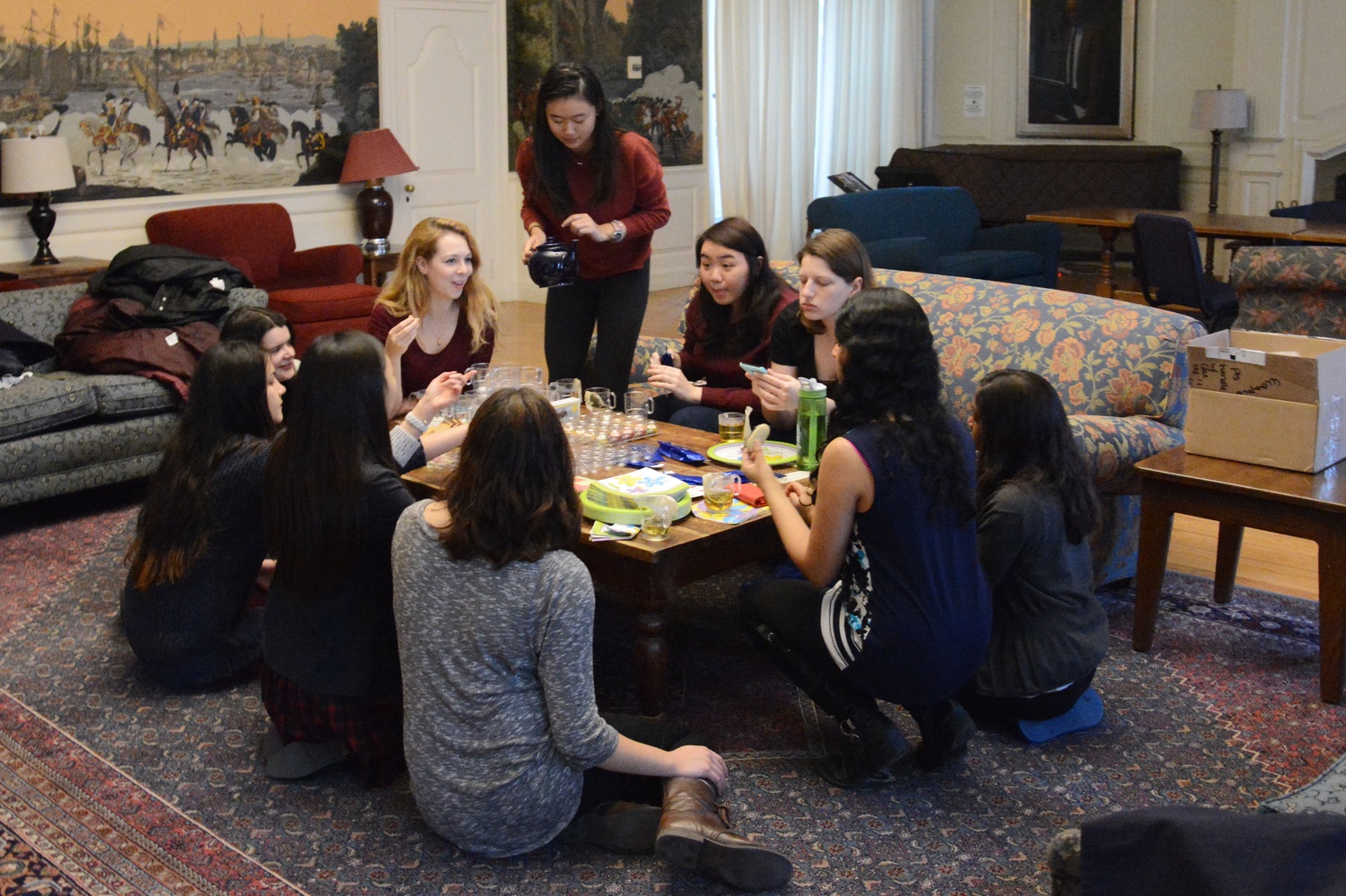 Women in Computer Science members discuss life with a career in computer science at a Mentorship Tea Party in Lowell JCR on Wednesday. WiCS hosts a series of events throughout the semester for fostering a community of technically-skilled women. By Suproteem K. Sarkar

Hana Kim ’16, co-president of the group, said having a community is crucial to building camaraderie through shared challenges.

“With CS, there are so many moments where you’re really struggling and hit the wall,” Kim said. “Unless you have people you are comfortable in sharing those experiences with, it can make you feel alone and that you’re not cut out for the concentration.”

Abrahams added that being involved in the women computer science student group on campus helped her feel more included and less of an outsider.

“I know that if I wasn’t involved in [Women Engineers Code] or the WiCS advocacy council, that I would come to the conclusion that there weren’t many women in tech here,” she said.

Despite barriers that exist for women considering Computer Science, there is an upside for concentrators when they begin their job search—companies often seek women who study the subject.

“[CS concentrators] are very very highly sought after, particularly women,” SEAS director of experiential and career development Keith R. Karasek said. “I field inquiries from companies who want to deal with students, they want particularly to get connected with WiCS… they really are swarming.”

According to Microsoft recruiter Rebecca Tucker, companies look to Harvard to “recruit for diversity” and often partner with student organizations to reach their members, starting as early as freshmen year.

“We do tech talks where we bring in female alums to tell their story, where a decade ago they were the only female in their class,” Tucker said. “Every tech company would love more female grads and more diverse grads.”

Tucker said gender diversity in the workplace is integral in the tech industry in order to build better products that sell to a broader market, and because “it’s just the right thing to do.”

While gender equality in companies has been the subject of scrutiny for the finance industry, over the years, the conversation has increasingly focused on computer science, according to Office of Career Services Director Robin Mount.

As Harvard seeks to increase the number of female students pursuing careers in computer science, the outside world often looks at how the University tackles the problem as it increasingly embraces technology and engineering.

“Harvard is a thought leader in the research it can do, and the changes it can make sets the standard for the industry.” Alaina Percival, CEO of Women Who Code, said. “It has both the ability and the need to be better about gender diversity in computer science.”