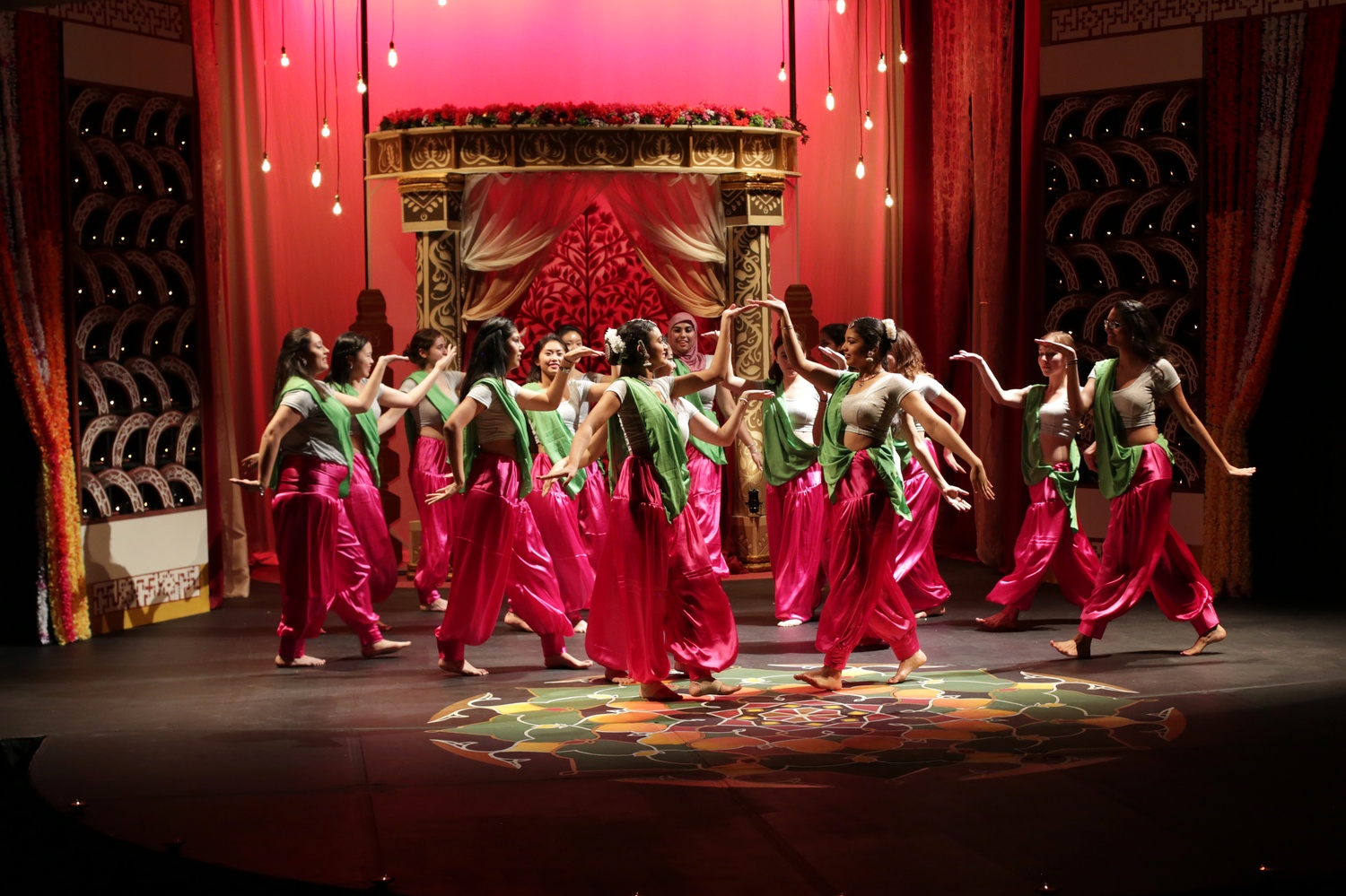 Student groups performing for the South Asian Association’s Ghungroo 2016 opening night. The show celebrates its 27th year as one of the largest student productions promoting South Asian culture through dance and music. By Fankai Liu
By Eugine Chung, Contributing Writer

This year’s Ghungroo—a flurry of dance, music, spoken word, and acting—featured a new focus on issues of mental health in South Asian communities, and included a revamped charity component of the show.

The event, organized by the Harvard South Asian Association, is currently in its 27th year and sold out over 1200 tickets.

Harvard’s Ghungroo team this year was comprised of almost 350 individuals—choreographers, dancers, stage design artists, writers, and tech support. This year, the show, spanning from February 25 to February 27 at the Agassiz Theater, was produced by SAA’s co-presidents Kavya Pathak ’17 and Nishant Kakar ’17 and directed by co-directors Kruti B. Vora ’17, Madhavi L. Narayanan ’17, and Avi Saraf ’17.

The co-directors and the show’s tech team, “Gtech,” decided to introduce pertinent social messages through a traditionally humorous and lighthearted medium.

“We thought with this many people in our audience, let’s use this space to really create a meaningful dialogue so that people can extend [it] outside of just the theater and talk about [it] for hopefully a long time to come,” Vora said.

In early October, the team of directors and technical crew brainstormed different issues affecting South Asian students that were important to them and could be similarly meaningful for a larger audience. After narrowing down alternative options, the group settled on mental health and South Asian stigmas regarding mental health, according to Vora.

“Ghungroo is already so meaningful to so many people’s lives, so we decided to add another layer of meaning to it,” Kausalya Mahadevan ’17, one of the show’s choreographers and dance directors, said.

Consequently, every aspect of the show—the mood of different acts, the skit, the music, the character developments—reflect the overarching theme of mental health awareness. 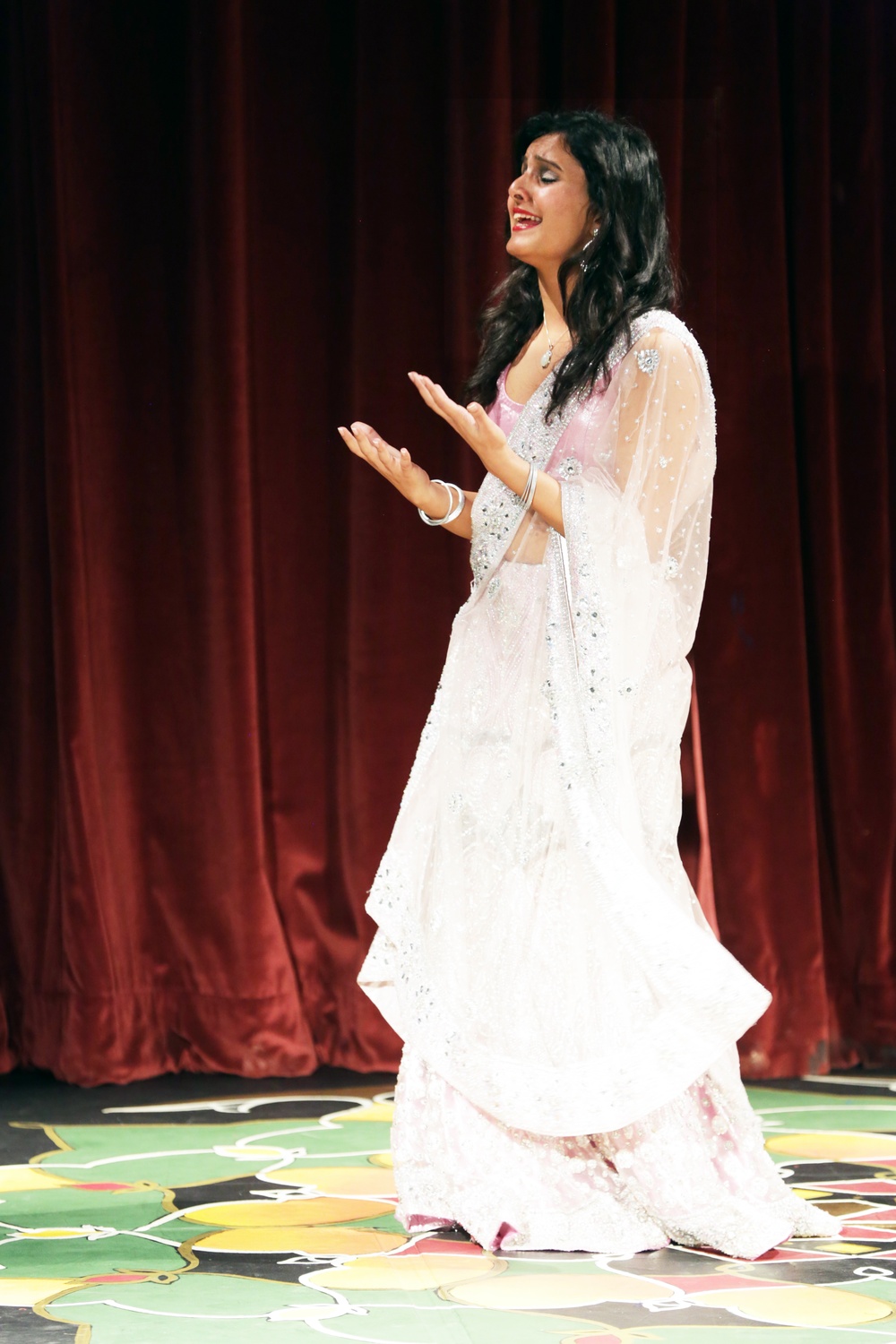 Preeti V. Srinivasan ’16 performs a monologue during the opening night of Ghungroo. By Fankai Liu

With the new changes came some challenges, one of which was balancing the identity and expectations of 27 years of tradition with the new additions. “For example, we were trying to add humor into the skit while also making sure we were tactful and respectful,” Saraf said.

The team also wanted to bring back the charity aspect of the show, harkening back to its origins as a relief fund for the Nepal flood victims, Vora said. This year, the show is soliciting donations towards the non-profit Counselors Helping (South) Asian/Indians, which focuses on ending stigma of mental health in South Asian communities and increasing the availability of needed services.

“The reason we chose CHAI is because they are uniquely focused both on the cultural stigmas that come with mental health, but also focused on bringing those issues into North America as well,” Narayanan said.