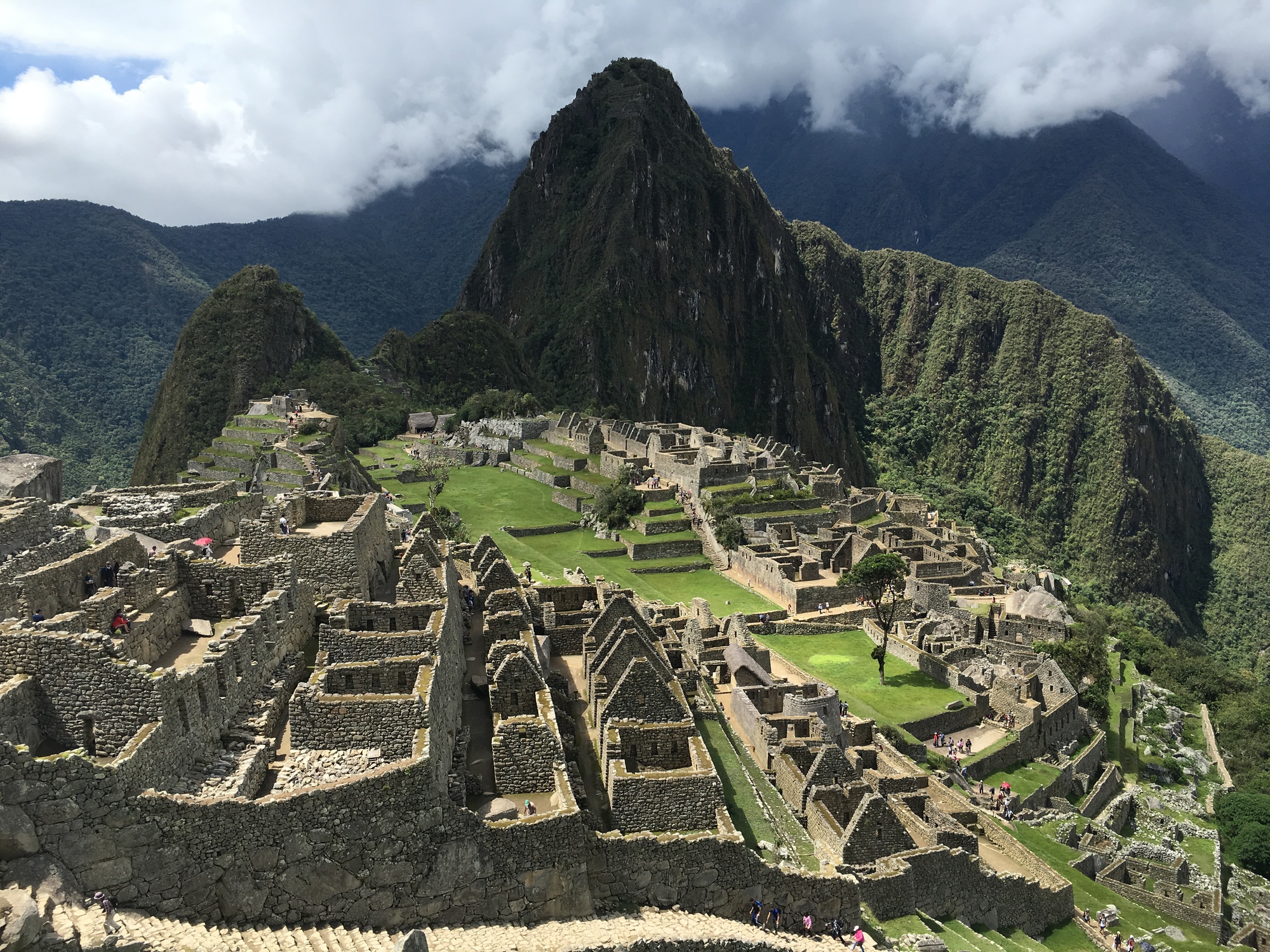 By Marella A. Gayla

When the tour guide told us that we would be eating lunch at a buffet right next to the entrance to Machu Picchu, I imagined a theme-park extravaganza of starch and docile proteins, coated in a gloss of mayonnaise.
By Marella A. Gayla

A large bowl of pink trout ceviche sweats delicately in its mound of ice, like a pageant queen under the lights of a stage. The blushing fleshiness of the fish belies its tartness. (Or so I imagine—due to a rather dynamic case of altitude sickness, I am subsisting on bread rolls and tiny freckled bananas.) I am pleasantly surprised to see that many of the offerings on the long table have Spanish names.

When the tour guide told us that we would be eating lunch at a buffet right next to the entrance to Machu Picchu, I imagined a theme-park extravaganza of starch and docile proteins, coated in a gloss of mayonnaise. Perhaps there would be a few caricatures of Latin American cuisine on a side table. I half-expected Guy Fieri to storm in on a flaming motorcycle, claiming this remote corner of Peru as a colony of Flavortown, U.S.A. Instead, I admire the aji de gallina, the Andean soups. This tourist buffet has me decently—and unexpectedly—impressed.

The restaurant is designed to feed a lot of people, fast. The buffet lineup crowns a fleet of blonde-wood tables, giving the room the efficient sterility of a hospital cafeteria. The servers behind the buffet tables even wear surgical masks.

Wifi costs three U.S. dollars per half hour. The Instagram geotag declares a postcard destination: “Machu Picchu, Peru—Wonder of the World.” Like sliced white bread in a bag and a Coney Island ferris wheel, the ancient mountain city that lies just meters away has earned the designation of “Wonder.”

A quartet of musicians, bearing pan flutes and stringed instruments, begin playing to a crowd of largely indifferent old white people in cargo pants. In the frenzy of quickfire Spanish and rapid, ecstatic beats, I catch one word from the refrain: Pachamama, the name of the Earth goddess worshipped by indigenous people of the Andes. A few of the old white people in cargo pants turn their heads for a moment to smile at the novelty of it all. Well, isn’t that fun!, they all seem to say. At a certain point, they return to eating flan and pudding parfaits.

After just 20 minutes of hiking Machu Picchu, it feels as if my lungs are two sizes too small. I perch upon a rock and peer at the stone structure below me, which my tour guide says is the Temple of the Sun, where Incan priests would sacrifice live hearts to Inti, the solar deity. The guide directs my gaze toward a small window in the temple, designed to capture the sun on the solstice each year. No layman was ever meant to set foot in this place—part of its sanctity was supposed to lie in its seclusion. I imagine the sun, perhaps the most public spectacle of all, sliding into its place in the window, a private reliquary framed in private space. My mind wanders. Considering the utmost holiness of this site, I can hardly believe that the tourist buffet is less than one mile away.

Fog cloaks the entire citadel—January is the rainy season in Peru. Like a timid bride, it only peeks out from beneath the veil, even as its guests stand in anticipation. Not one Catholic cross stands in this place; Machu Picchu was abandoned because the Spanish conquerors never found it. As the mountain demurely pulls over its misty hood, I understand why.

I later find myself wandering the marketplace in a valley town called Pisac. I take an adorable (albeit questionably appropriative) photo of a little girl in traditional indigenous dress. I peruse alpaca wool knitwear in loud and ecstatic hues, decorated with images of llamas, alpacas, and occasionally the Minions from the Despicable Me films. (It is truly a strange time we live in.) Directly adjacent to the marketplace stands a modest white church, strategically located so that Spanish priests could Christianize the market-goers. Through a small window, my guide says, priests would read their sermons for the indigenous people to hear. I learn that priests sometimes combined the figure of the Virgin Mary with Pachamama, the Mother Earth deity, to help convert Incas to Christianity. The chapel faces the mountains, perhaps a concession to the indigenous people’s reverence for nature, especially mountains and valleys. As we leave the market, I hear a street vendor playing “Hey Jude” on a pan flute. Which of the Beatles, I wonder, would have played the pan flute? George, I decide. Definitely George.

Soon after my visit to Machu Picchu, I make my way to Cusco, touring chapels and churches that the Spanish built over sacred Incan sites. On a narrow, winding street I spy a small Italian restaurant: Pachamama Pizzeria. According to a sign on the door, they serve pizzas, pastas, and meats. I wonder what about this restaurant makes it worthy of such a sacred title, why Pachamama now wears a pizza apron in addition to a Virginal blue veil.