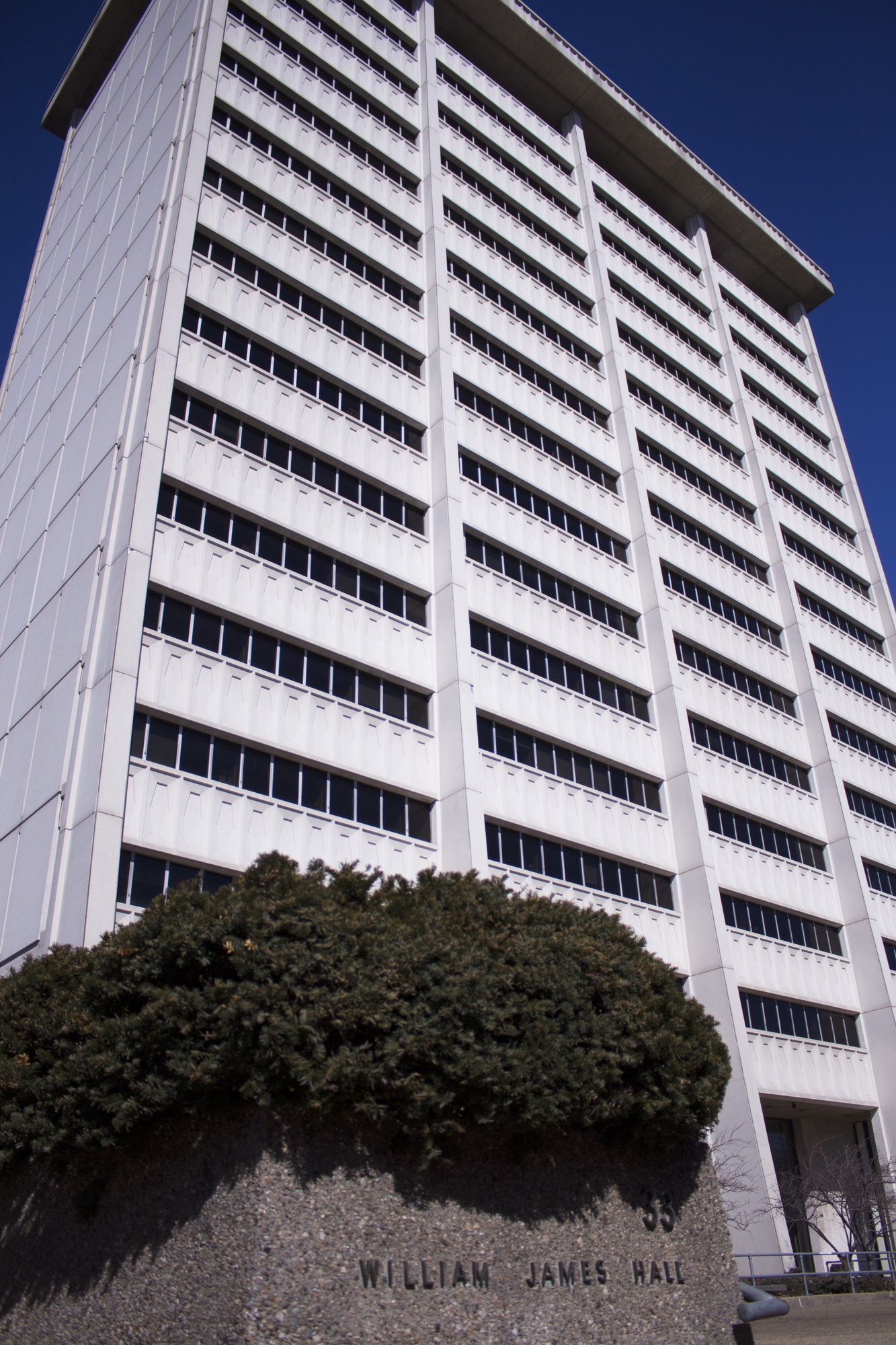 The social studies department, located in William James Hall, has been criticized by those looking to study non-Western perspectives.
By Mia C. Karr, Crimson Staff Writer

The social studies department, located in William James Hall, has been criticized by those looking to study non-Western perspectives. By Helen Y. Wu

Vasquez-Rodriguez said she has also found a lack of diverse and non-Western perspectives in the mainstay of many social science concentrations in the College: the required tutorials. She said she even approached a teaching fellow about a lack of writers of color on the syllabus.

Vasquez-Rodriguez's frustration with a Western-dominated curriculum in one of the social sciences leaves her in good company. As students and professors in the Faculty of Arts and Sciences increasingly call for courses that move beyond American and Western European foci and schools of thought, the slow pace of curricular change has left many dissatisfied. However, access to non-Western perspectives and methods continues to grow.

Students searching for a non-Western take on the social sciences will first run up against a critical obstacle: there aren't many of those courses.

The availability of course offerings largely depend on the specialization of faculty in that department. According to History Department Chair David R. Armitage, his department recently went through a period of five or six years without any professors of Latin American history after the loss of several faculty members. Since then, the department has rebuilt its Latin American subset with the addition of one junior and three senior faculty members.

“We couldn’t claim to be a serious department without large scale coverage of Latin American history, both in time and in space,” Armitage said.

However, gaps in the department’s coverage still remain, he said, most notably in Middle Eastern history. The retirement of the department’s sole specialist caused the shortage. While Armitage said filling the gap is a priority, it is partly out of his control. Last year, FAS administrators allotted for no new hires in the History Department despite his requests, he said.

Government is another concentration that has recently suffered from a lack of Middle Eastern coverage. Government professor Melani C. Cammett, who began teaching at Harvard this year, said she is the first full Government professor with expertise in the Middle East that FAS has had in decades. As the sole specialist in the region in her department, she has a lot of ground to cover.

Map of Harvard's Cambridge-Based Centers of International Study within the Social Sciences division of the Faculty of Arts and Sciences. By Derek K. Choi

“People who work on India or China probably only work on India and China, and that’s more acceptable in American social science to only work on one of these big countries, whereas I have to be an expert in 23 countries because I work on this homogenous unit called ‘the Middle East,’ which isn’t homogenous at all,” Cammett said.

While Government concentrators interested in the United States can always count on faculty creating courses in their area of focus, others are not so lucky. Government concentrator Delany D. Sisiruca ’16 is doing thesis work that focuses on Latin America, which she said has been a challenge because the department’s only two Latin American specialists are currently on academic leave.

Like the History Department’s current lack of a scholar of the Middle East, Rodriguez sees the problem as one that can be remedied by hiring practices, not just of more faculty who focus on non-Western areas, but of more faculty of color as well.

Ted G. Waechter ’18 remembers sitting in Social Studies 10a, a required class for all Social Studies concentrators, and listening to his professor tell a joke about the Republican presidential primary candidates.

“I remember thinking, ‘In those three minutes, we spent more time thinking about the 2016 Republican presidential primary candidates than everyone in Sub-Saharan Africa,’” Waechter, a Crimson Editorial writer, said.

That moment hit home what Waechter had already started to realize: the Social Studies concentration was just not for him. He now concentrates in African and African-American Studies.

Waechter's experience encapsulates something other students have expressed—even in the most important courses within some social science concentrations, students say they are exposed primarily to Western perspectives and methodologies.

However, Waechter said the Social Studies concentration is working towards making the concentration less focused on men and white people. According to American History professor James Kloppenberg, who began co-teaching Social Studies 10 this fall, the course syllabus includes African American and women writers for the first time since the course was created in the 1960s.

Still, the emphasis of the course is primarily Western, Kloppenberg said.

Western dominance can appear not only in the names of writers on a syllabus, but in the methodology of a course as well. Sisiruca said this was most apparent in her sophomore Government tutorial.

“There’s a huge Western perspective on things, and I remember noticing it most in our sophomore tutorial, which is entirely sort of this Western conception of democracy and it’s very normative,” she said. “It’s sort of like ‘why don’t all of these governments have our concept of democracy yet?’”

“Most scholars at Harvard would disagree with the premise that we study China using Western methods,” Szonyi said. “Most scholars would say that these are universal methods, that happened to be developed in the West, but that social science is not particular to any one culture, but it’s worth asking the question if that’s true.”

Szonyi said he himself subscribes to the South China School of history, which was developed by Chinese intellectuals. He said he believes that he was hired partly to provide this different perspective and that he is currently the only practitioner of this school of thought at Harvard.

THE CASE FOR DIVERSITY

Access to non-Western perspectives allows Harvard to meet students’ interests when they arrive on campus and to expose them to a broad range of experiences they might encounter after graduating.

Terry said his decisions about Social Studies 10 were influenced by what he saw students were interested in.

“For me, it was really important to kind of look at what are people writing theses about, what kind of questions are they trying to answer,” Terry said. “And to me, that’s why it was so important to really make sure people got a theoretical introduction to theory on issues of race, gender, post-colonialism, sexuality, because the students are writing about that.”

As for the History Department, Armitage said there is a balance of students doing thesis work in American history, European history, and history outside of Europe.

History professor Kirsten A. Weld was the first of the hires to repopulate the History Department with Latin Americanists.

But the case for non-Western curricula goes beyond diversifying senior theses. From a practical standpoint, Harvard students must be exposed to wider perspectives to thrive in the modern world, faculty members said.

Szonyi said, when he began at Harvard, most of the focus on China was found in the East Asian Studies Department and at the Fairbank Center for Chinese Studies, which he now directs. Now, however, the study of China has spread throughout Harvard, and more students are coming to the Fairbank Center to ask for funding to study in China, reflecting the country’s growing prominence.

There is also the question of what students should gain from a liberal arts education. For many faculty members, exposure to different cultures and perspectives is part of the answer.

“I think it’s just really valuable to study a culture that is radically different from one’s own to the extent that it might question our assumptions on our own society,” Sunil Amrith, a professor of History and South Asian Studies, said.

Amrith’s appointment, as the first tenure-track professor hired in the new South Asian Studies Department, is part of a larger trend faculty members said they have noticed in FAS to hire peers with a non-Western focus.

“There is certainly room in the overall Harvard curriculum for a broadening of the kinds of things people read, and I think the appointments that have been made in recent years indicate that most departments in Harvard are quite alert to that,” Kloppenberg said.

Recently appointed FAS Dean of Social Science Claudine Gay, a professor of Government and African and African-American Studies, said she counts diversity among one of her core values.

“I feel like we really cheat ourselves an an institution if we don’t reflect the diversity of experiences and talents that are out there,” Gay said.

Where course offerings are still lacking, students and professors sometimes turn to resources outside of the classroom. Recently, working groups were formed in both Latino Studies and Asian American Studies, through the committee on Ethnicity, Migration, and Rights.

Students also have access to the international centers in FAS that fall under the purview of the Social Sciences division.

“I think of one of the things that the international centers... do is to try and break out of an ethnocentric focus and place Harvard better in the world and the kind of education we give more substantially in the context of the world,” Asia Center Director and Anthropology professor Arthur Kleinman said.

For David J. Coletti ’17, it is not enough to just provide students who seek out non-Western coursework or scholarship with those opportunities.

“One can easily graduate Harvard without taking a course on any other country besides a European country or the United States, and I see an issue in that,” Coletti said.

Coletti said he initially concentrated in Government but switched to the Latin America track of History and Literature, which he said has provided him with a greater opportunity to read primary texts about the region he studies.

Waechter, too, said he has found a concentration that better suits his scholarly interests in the African and African-American Studies Department. However, the issue is greater than one student’s intellectual interests, or even the social sciences at Harvard.

—Staff writer Mia C. Karr can be reached at mia.karr@thecrimson.com. Follow her on twitter@miackarr.