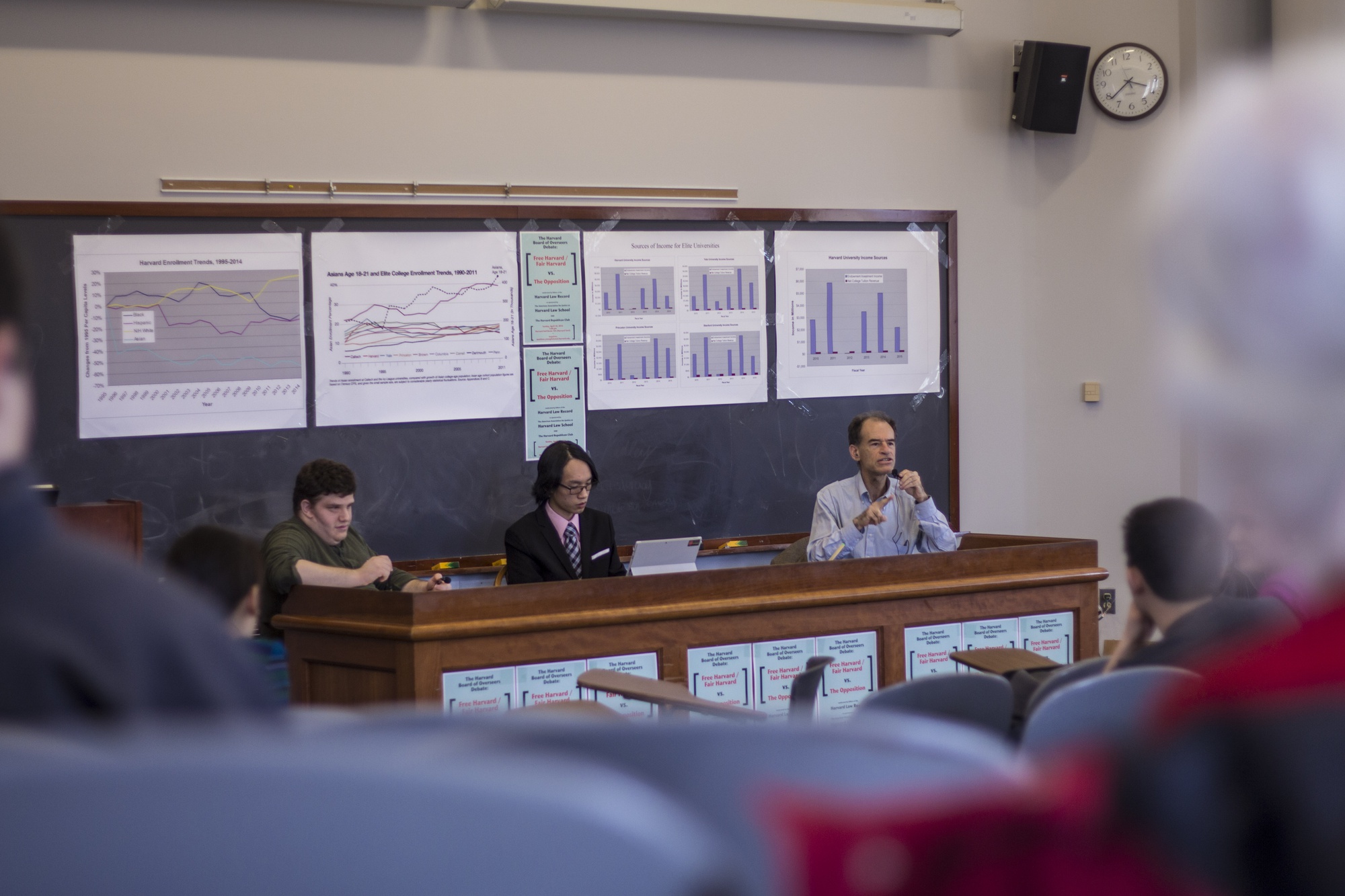 In an election that usually consists of schmoozing Harvard alumni, Ron K. Unz ’83 took a different tack Sunday, arriving on campus for an event billed as the first-ever “debate” for a spot on Harvard's second highest governing body. 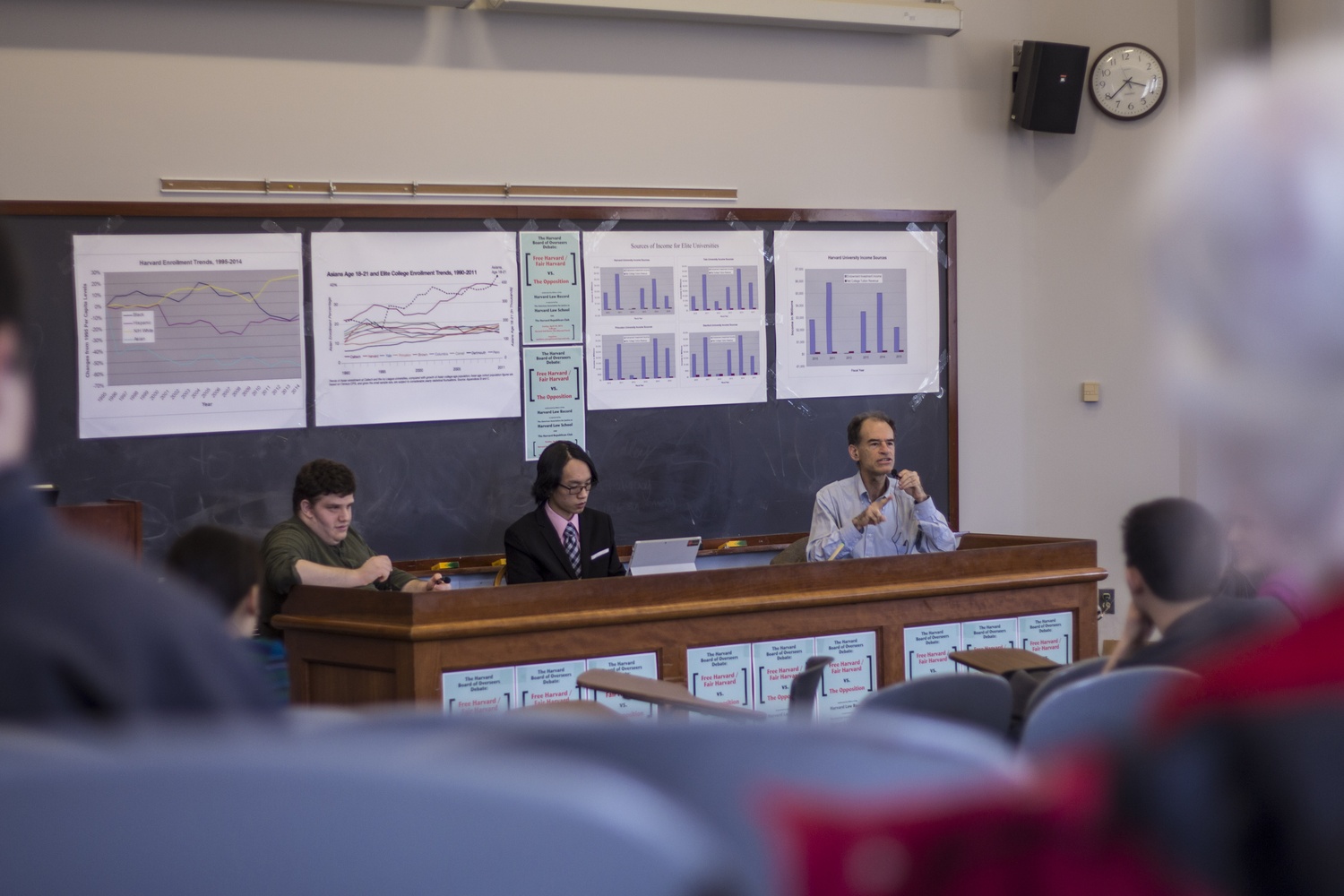 In a two-and-a-half hour back-and-forth, Unz, Daniel J. Solomon ’16, and Luran J. He ’18 discussed whether or not Harvard should abolish undergraduate tuition and make public more data about Harvard’s admissions policies—the two tenets of Unz’s “Free Harvard, Fair Harvard” Board of Overseers campaign.

But much like his campaign for Overseers, Unz’s debate debut was unconventional and almost did not happen.

Initially publicized as a debate between Unz and alumni opposition group Coalition for a Diverse Harvard, the event was rebranded after the Coalition elected not to participate. The Harvard Republican Club and two Law School organizations sponsored the debate, taking the mantle after several other clubs, including the Harvard College Democrats and the Chinese Students Association, declined.

Nevertheless, Unz took a red-eye flight to Cambridge this weekend to argue for the controversial campaign platform that he and four other alumni formulated earlier this year.

For the first hour of the debate, the panel discussed the “Free Harvard” portion of the candidates’ platform. Brandishing a stick and flanked by his campaign’s signature collection of charts and graphs, Unz argued that eliminating undergraduate tuition—if not necessarily room and board—would “start a huge tidal wave” of pressure to make college free across the country.

“If Goldman Sachs bought a community college and declared itself tax exempt, that would be absurd, and that’s not too different from what’s happening at Harvard,” Unz said in his opening remarks. “Huge hedge funds should not charge tuition.”

But such a proposal, Solomon—an inactive editorial writer—contended, would be more a subsidy for the wealthy than a benefit for lower-income families. Unz replied that the typical child of two New York City public school teachers would not receive financial aid, a claim that Solomon—himself the son of “two public servants in Queens”—contested.

In the second half of the debate, Unz, Solomon, and He discussed the “Fair Harvard” prong of the platform. Unz and his fellow candidates have said they suspect Harvard may have a “quota” for Asian applicants and have called for more information to interrogate that possibility. Solomon said he was open to the idea of more transparency in the admissions process, but worried about of the consequences of such a change.

“I think transparency could be a positive thing. I don’t like the idea of multi-billion dollar organizations concealing as much information from the public as they can,” Solomon said. “I do think it’s a sort of Trojan horse for going after racial affirmative action as such.”

Unz, who is also running as a Republican for U.S. Senate in California, said he would consider a semi-random method for admitting students to Harvard, adding that his platform has no official position on how to change admissions policies.

“If we want true diversity, fair diversity, we should go with the random model, rather than the corrupt pseudo-diversity that we have right now at Ivies like Harvard,” Unz said.

According to University President Drew G. Faust, the debate—albeit technically one-sided—was a first in Overseers election history. While Faust said she would not endorse any candidates in the race, she has previously critiqued both tenets of the “Free Harvard, Fair Harvard” platform.

Overseers ballots for the five open seats were sent to all Harvard alumni earlier this month, and results will be announced on May 26.