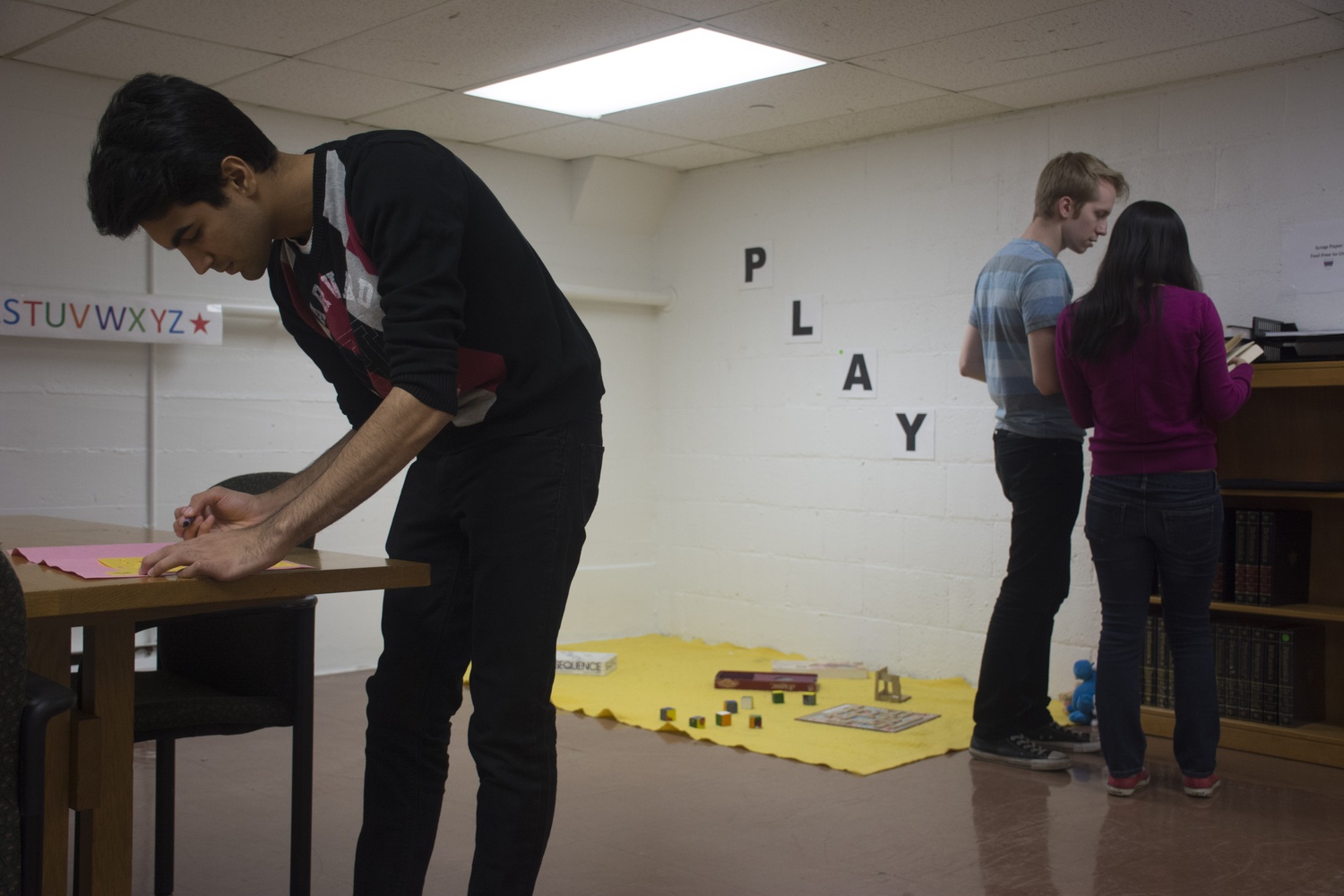 Saad Amer ‘16 (left) and two of his partners solve puzzles with clues during their one-hour Escape the Room challenge in Eliot basement. By Isabel G. Alexander
By Graham W. Bishai and Ashley J Kim, Contributing Writers

While many Harvard students feel the need to escape the pressures of academic life, they can now try their hand at escaping a room full of puzzles in the basement of Eliot House.

Last weekend, Eliot opened its own Escape the Room, an interactive installation in which groups of four to six people are “trapped” in a room and must race to solve puzzles inside to “escape.” The game has gained popularity in recent years and now can be found in sites across the globe.

The organizers, a group of four Eliot blockmates, said they hoped to bring the fun to Harvard’s campus while keeping costs down.

Peter L. Ku ’16, one of the co-builders, explained that after a few House outings to Escape the Room in Boston, he and his blockmates thought students here would enjoy the experience if it were not cost-prohibitive.

“We wanted to get more people to get excited about Escape the Room but it costs $28 per person. You have to take a trip into Boston and pay for Ubers; it’s kind of expensive and time consuming,” Ku said. “We thought to ourselves, ‘Hey, this doesn’t seem so hard to create, and it could be kind of fun, and I bet we could do it ourselves. So we did.”

Once they got the House administration on board with the idea, Ku and his blockmates— Amanda Lin ’16, Velina Kozareva ’16, and Suman Gunasekaran ’16—spent their spring break planning, designing, and building the room.

“We spent a lot of time in the woodshop, building our own puzzles, using scrap wood that was free for everyone,” Lin said.

They also received donations, including a webcam from the House, and were ultimately able to keep construction costs under $100. Groups of four to six can sign up on the game’s Facebook page.

The organizers first tested the room with their friends, then opened it up to members of the House, before opening it to all Harvard affiliates.

Bailey Q. Colfax ’19, who was one of the original testers, said she liked that the installation required more intense thinking than movement, as opposed to other experiences she has had with the game.

“Some other Escape the Rooms have been very physical,” she said. “I don’t think those challenged my mind quite as much as the puzzles that we had here.”

Michael S. Giles ’19, another student who participated as a tester, said he would recommend the exhibition to friends.

“It was a good way to work with my friends,” he said. “There was a big teamwork component to it, so I’d encourage other blocking groups or friend groups to try it.”

Ku said the next step was to get more people trained to run the room in order to make more time slots available, even after the organizers graduate.

“Hopefully it catches on enough so that people want to do it into future years, and build another Escape the Room, either in Eliot or in a different House, then run their game,” Ku said.

A previous version of this article misspelled the last name of Velina Kozareva.