'Geeks and Greeks' a Weak Representation of MIT Life 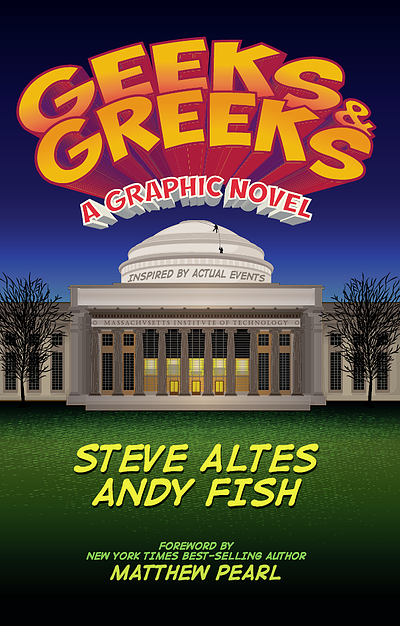 Steve Altes’ “Geeks and Greeks,” a graphic novel about MIT’s hacking and pranking culture, at first seems like a promising foray into one of the most mythologized college campuses. The novel’s fresh format is a relief from the typical “tell-all tales” that saturate the Ivy League+2 literature market—but it remains marketed to infatuated outsiders looking in, as evidenced by the scenic photos and explanatory blurbs on its website. It also reverts to the classic “buff jocks and skinny academics” dichotomy, imagining the highest echelons of academia as a reiteration of high school lives and distilling the complicated world of MIT into the most readily available social archetype. Bad anthropology, to be sure, but even worse writing.

In one scene, a geek named Dexter is forced to do the jocks’ homework. Desperately sleep deprived, he laments that his “happiness is on a downward vector.” [He doesn’t need to speak like this to convey his geekiness, and this awkward moment demonstrates Altes’s difficulty adjusting to the medium of the graphic novel. He uses words to characterise the novel’s main players, forgetting that he operates within the domain of the image. In graphic novels, the immediate role of the writer is not necessarily to create dialogue but rather to create plot, and in this regard Altes is less than stellar. The overarching conflict of academics and athletes seems forced, and its accoutrements, such as the “dice of doom” (a twelve-sided die that dictates the punishments for the Greeks’ victims), are not quite captivating. Where Altes could have capitalized on the fluidity of his medium to render a compelling and unique plot—a portrait of a school—he instead fills in the backstories of some of MIT’s most famous hacks. Altes is encumbered by his journalistic past: A novel does not need to be factual to be true, and he would do well to eschew the scaffold of MIT hacks for something more socially nuanced.

The artist, Andy Fish, does no better in his attempts to characterize MIT, and except for the occasional panoramic view of an MIT landmark, there is nothing to distinguish the setting from any other college campus—or even from that of any high school. Fish’s particular style (his work includes superhero comic books as well as more eclectic offerings such as “Werewolves of Wisconsin”) barely makes a cameo in “Geeks and Greeks.” Instead, Fish tries to conjure up an almost bucolic environment of collegiate drama. While he excels in the novel’s scenic shots, Fish has little material to elaborate on when it comes to the dialogue-laden parts. The thinness of the characters offers little to work with, meaning that every frat boy is virtually indistinguishable from the rest.

Colorist Veronica Fish’s work proves likewise mixed in its success. Fish created the commercial art for the CW reimagining of Archie, in addition to drawing two issues of the classic series, and while her captivating pop-art kitsch style is remarkably versatile, its genius is not apparent in this series. Instead of making use of her normally well-curated color palettes (most apparent in her magnet designs), Veronica Fish goes confusingly garish in the first few strips, relying on utopian greens and optic blues. To her credit, a furtive hacking mission is beautifully colored with deep purples and pastel yellows—the colors of mystery, but also of untapped artistic talent.

Overall, “Geeks and Greeks” begins with a promising premise that is ultimately ill-conveyed. The writer’s lack of familiarity with the medium lays out a poor canvas upon which the visual artists struggle to work. While “Geeks and Greeks” is meant to be something of a genre hack, its ill execution leaves tangible disappointment in its wake. For now, MIT’s story can best be understood via a visit to its campus.