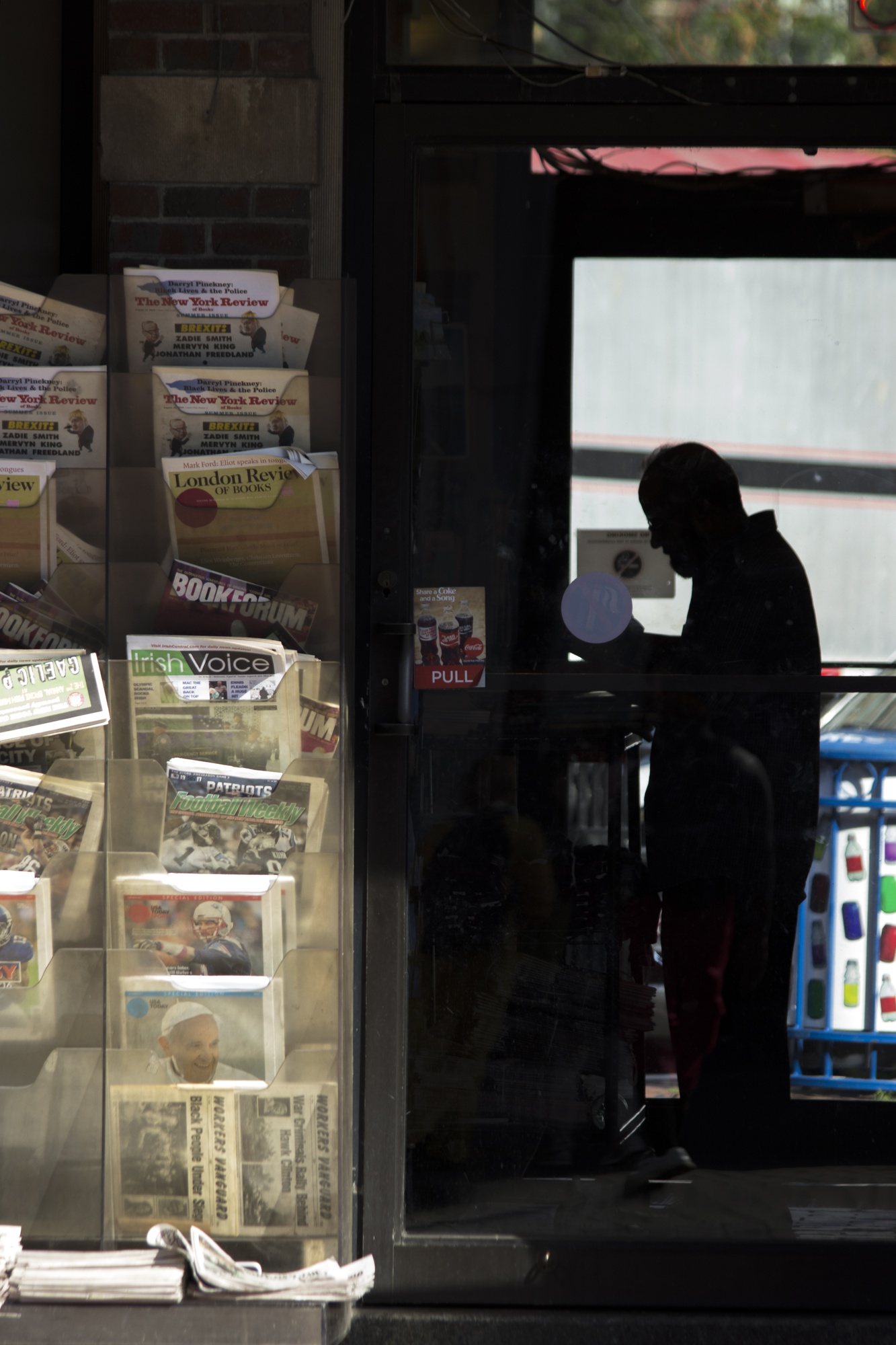 Upcoming renovations to the Harvard Square main plaza may force the removal of the iconic Out Of Town News news vendor. The $4.6 million renovation is set to begin in 2017.
By Joshua J. Florence, Crimson Staff Writer

The potential removal of iconic local business Out of Town News and plans to renovate the store's kiosk have sparked outcry among Cambridge residents, even though the structure itself is not slated for demolition. 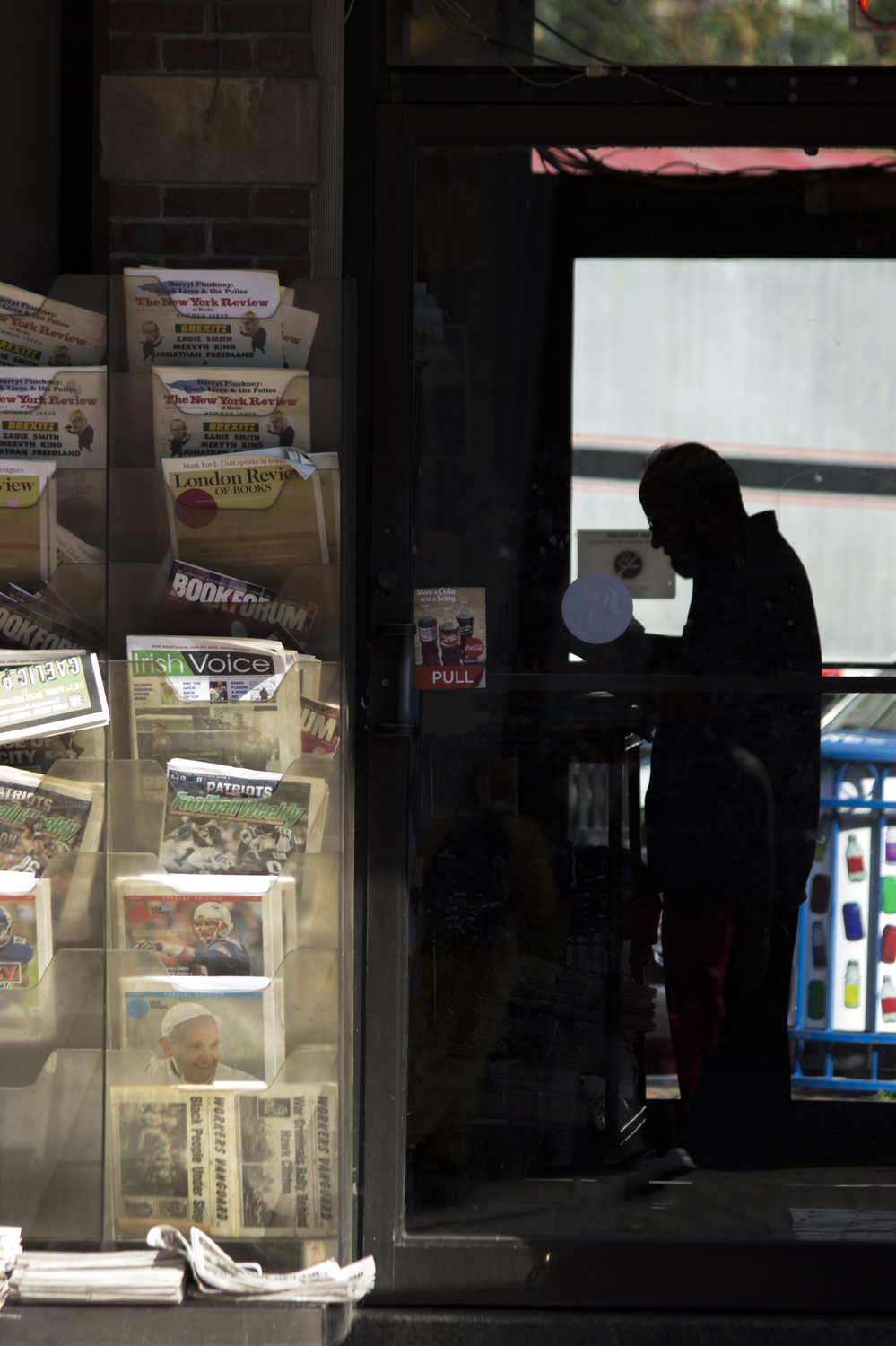 Upcoming renovations to the Harvard Square main plaza may force the removal of the iconic Out Of Town News news vendor. The $4.6 million renovation is set to begin in 2017. By Thomas W. Franck

The City of Cambridge, which currently leases the kiosk to Muckey’s Corporation, is planning to begin a renovation of Harvard Square’s central plaza in 2017. Muckey’s has owned Out of Town News since Hudson News dropped its lease in 2008. While no plans have officially specified what the kiosk will hold following the renovations, the space may not include the store known for its sale of newspapers and magazines from around the world.

The $4.6 million renovation plans to “open up the historic kiosk building for more public use, enhance the historic character of the building, and build on its iconic presence,” according to the city’s recently approved Fiscal Year 2017 Budget. The proposed renovation will revert the kiosk to its appearance before the inclusion of Out of Town News in 1984, according to Charles Sullivan, executive director of the Cambridge Historical Commission.

Public response to the new design and potential removal of Out of Town News has been widespread. On Monday, six Harvard professors wrote a letter to the editor in The Crimson critiquing the proposed changes. Local restaurant Bartley’s Burgers displayed a colorful sign at its entrance with “Save Out of Town News” emblazoned in chalk.

Suzanne P. Blier, a Harvard professor and member of Our Harvard Square, said the group was formed in response to the city’s plans for renovation.

“[Our Harvard Square] is a group of individuals who became aware of the fast-moving events around the redevelopment of Harvard Square and most importantly the question of the kiosk,” Blier said. “We realized specifically, for preservation of the Harvard Square kiosk, that it was really important to bring in broader local, national, and international support.”

The petition and Monday’s letter to the editor request that the Cambridge City Council grant the kiosk “landmark” status to preserve the building’s historical integrity.

However, the kiosk has been on the U.S. National Register of Historic Places since 1978, and is within the jurisdiction of the Harvard Square Conservation District. Landmark status from the City Council would do little to change its current protected status in Cambridge, Sullivan said.

“It would be duplicative to designate it as a landmark,” he said. “Harvard Square has been designated as a conservation district since the year 2000.”

However, landmark status is important to Our Harvard Square, Blier said.

“We want to give the kiosk as much protection as possible to safeguard its core historical features,” she said. “To give the kiosk landmark status is up to the City Council because they own the building and could easily do it.”

Sullivan said he believes that many of the proposed controversial changes are minor.

“People don't understand how the structure was originally designed,” Sullivan said. “The whole thing was transparent, and that’s what this proposed design will recapture. So no original aspect is being torn away, with minor exceptions, and the only new inclusion is the glass.”

Denise A. Jillson, executive director of the Harvard Square Business Association, said the planned renovations would modernize the kiosk and the surrounding plaza. In its current form, the plaza, especially the area known as “the pit,” isn’t fully handicap-accessible, according to Jillson.

“Some people say ‘oh my goodness, they’re moving out a locally-owned independent’ and of course that is a concern, but the reality is that it is public land,” Jillson said. “The reality is that most people aren’t getting their news from a newspaper, and we can’t change that.”

The city began preliminary discussions and hearings about the proposed renovations in 2013, according to City Councillor Jan Devereux. Over the summer, a City Council committee held a hearing to allow community members to voice their concerns with the project.

“I think there is a fair amount of misunderstanding and overall angst about change,” Devereux said. “Harvard Square is psychologically and culturally important for a lot of people who have had any association with Cambridge, whether as a student at Harvard 40 years ago or as a resident.”