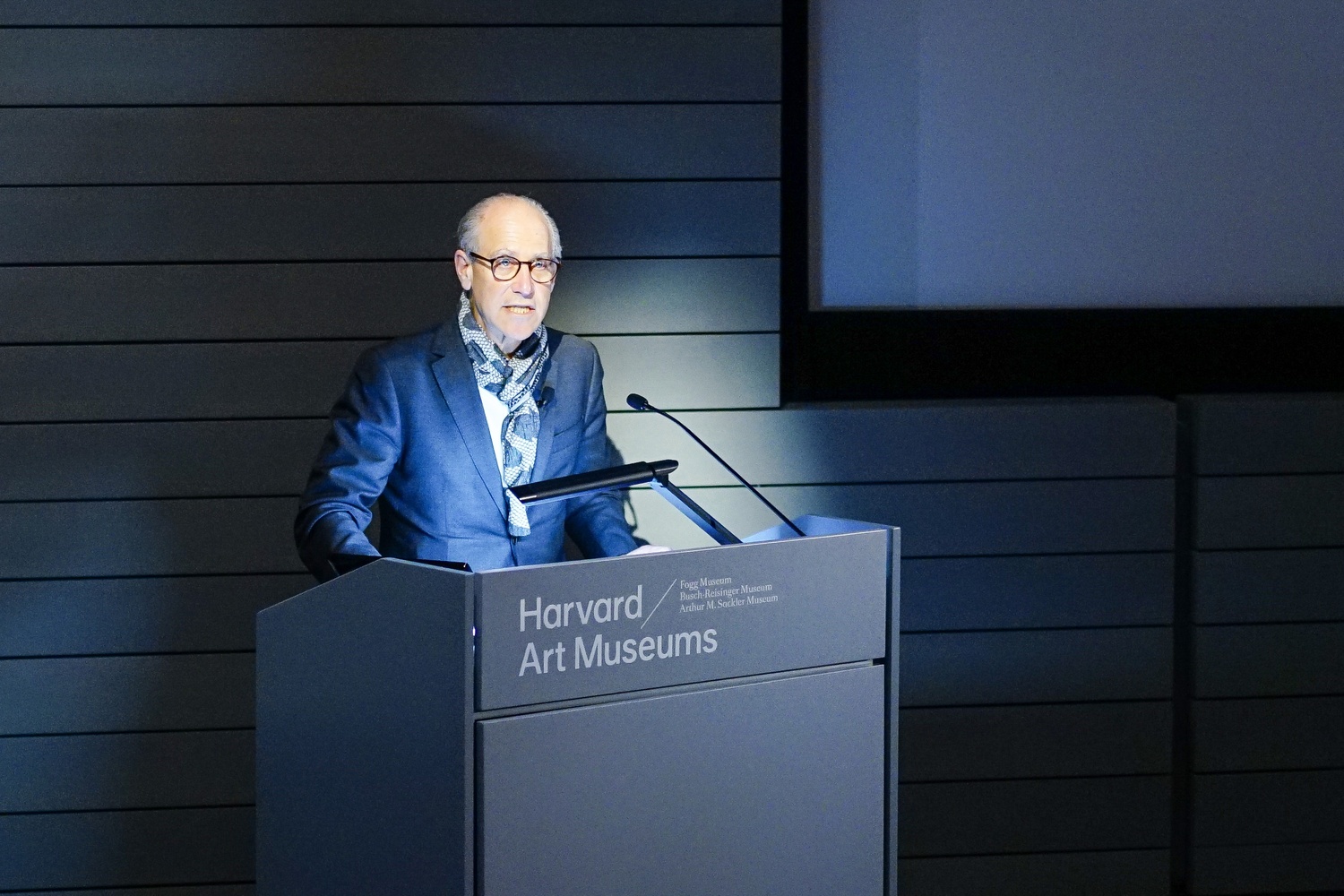 On Oct. 25, Glenn Lowry ’76, director of New York’s Museum of Modern Art, came to the Harvard Art Museums to deliver the annual Henri Zerner lecture, entitled “In Between Places: Making Contemporary Art in the Middle East.” Lowry, a curator at the Museum of Modern Art since 1995, received both his master’s and doctoral degrees from Harvard in the history of art. His talk surveyed several contemporary Middle Eastern artists to demonstrate the nature of the space in which they work, which he terms “in-between.”

Lowry began the lecture by deconstructing the notion of the Middle East, arguing that the Western understanding of the Middle East—and its associated terms—might be overly limiting, excluding parts of the world inhabited by Muslim immigrants. He argued that the past century has seen a trend of “deterritorialization,” or, the disassociation of people of various cultures from their home countries.

The talk revolved around the theme of “in between-ness,” as Lowry argued that the Middle East ought to be a case study for self-identity and location in a changing world. He connected various artists to issues of place and belonging, arguing that the artists each used distinct methods to rationalize the constant change in geography in the Middle East. “Anxiety needs to be incorporated into the object of critical attention,” Lowry remarked. “Anxiety is the effective address to the world that reveals itself as caught up in between frames.”

Lowry discussed the representation of space in modern Middle Eastern art, invoking the example of Oraib Toukan, a Lebanese artist who created an exhibition called “The New(er) Middle East.” The piece engages the audience by allowing them to re-arrange countries to create new maps of the Middle East. Lowry sees this piece as an example of ways in which Middle Eastern artists complicate the notion of a fixed definition of the region. Lowry also drew upon the work of Jananne Al-Ani, an Iraqi artist known for her ongoing collection “The Aesthetics of Disappearance: A Land Without People,” a critique of media representations of the Gulf War. Lowry argued that Al-Ani’s work develops the notion of belonging in space. He noted that her works, which typically depict desolate locations that are no longer inhabited, demonstrate the possibility of preservation and survival in response to war and destruction.

Lowry developed the theme of diaspora by discussing the work of Bouchra Khalili, a Moroccan-French artist whose work “The Mapping Journey Project” was featured at the Museum of Modern Art in 2016. “Khalili succeeds at making these stories intensely personal, while allowing us to follow each person’s journey without seeing their face, and allowing us to understand their journey as part of a larger migration,” Lowry remarked.

The talk integrated paintings, sculptures, film, and emerging forms of digital art. Lowry discussed the Saudi Arabian physician and artist Ahmed Mater’s work “The Desert of Pharan,” which seeks to uncover the hidden story behind the restoration and modern construction of Mecca. “Mater’s photographs take us from dramatic aerial views of Mecca to the forgotten corners of the city, from the Quba to the desolate,” Lowry said. He argued that the project might serve as an “unofficial history” of the city, one that does not overlook the lesser known buildings that hold religious salience in the Islamic tradition.

Lowry concluded by arguing that the artists he had discussed use strategies familiar to European artists, but deploy them to speak about issues of colonialism and space. He ended with his description of the space these Middle Eastern artists are working in. “Liminal space, the in-between space, at times metaphoric and emotional or spiritual, where these artists balance the contingency of settlement with the reality of itinerancy,” he said.

Winston Robinson, a Cambridge resident, commented on the breadth of the talk. “I didn’t expect it to be in depth, but I don’t think anyone could have covered it in more depth really, since the whole point of the talk was that the art is evolving and that it’s not just one thing, but a whole bunch of things,” he said.

Charles S. Krumholz ’18 remarked on the lecture serving as a much-needed platform. “I think it was powerful to use the voice of the director of MoMA to focus on an area of the world that isn’t focused on as much in art museums, and I’m hoping that opens up future opportunities for intellectual discourse about the region,” he said.