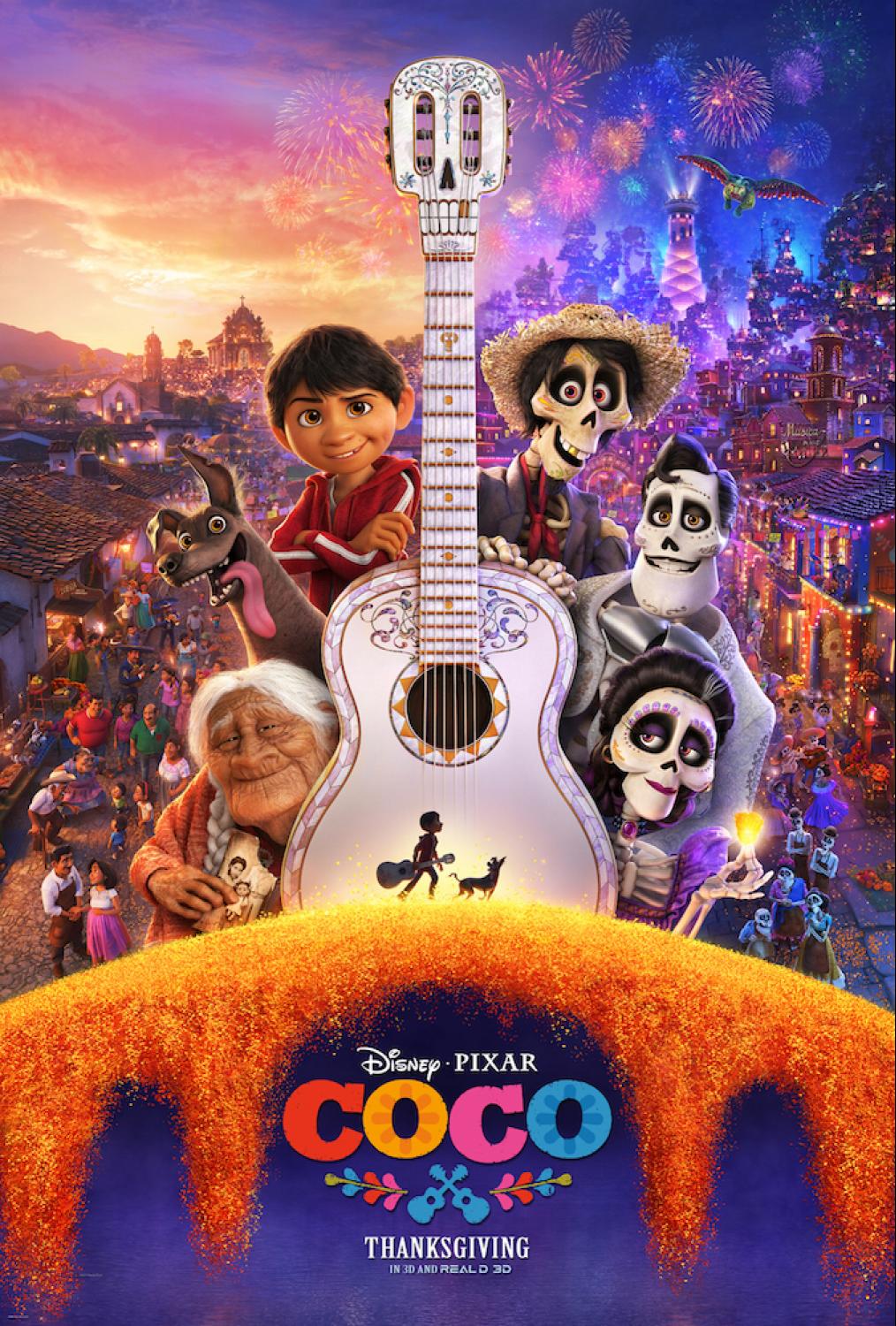 “Up.” “Wall-E.” “Toy Story.” Without a doubt, Pixar’s animation quality, sound design, and attention to detail stands bar none. But beyond technical considerations, Pixar’s emotional intelligence and commitment to genuine storytelling make their productions transcend the realm of “wacky kid’s film” and become something more. They stand as memorable meditations on those experiences that have been explored in story for time immemorial— family, love, friendship—tropes which could easily make for a cheesy production in lesser talented hands. “Coco,” the latest addition to Pixar’s incredible repertoire, once again combines powerful storytelling, attention to detail, and technical mastery to deliver a memorable movie experience.

The film follows the story of Miguel, an aspiring musician who must deal with the conflict between the pursuit of his passion and the demands of his family. His interest in music provokes great opposition from his family, as his great-great grandfather abandoned his wife and young daughter to pursue a musical career. During an episode of family drama over whether he should participate in the town’s Dia de los Muertos music contest, Miguel is accidentally transported to the land of the dead, and so his adventure begins.

The tension between aspiration and familial duty is explored throughout the film through a variety of characters, each expressing different views on the matter. As the film progresses, Miguel’s perspective on the matter becomes more nuanced, and he hears compelling arguments on the merits of both tensions. Instead of offering a heavy-handed and definite “solution” to this moral quandary, Pixar presents a moderate solution, and ultimately allows the viewer to decide what they see as the right balance.

Though Pixar suggests a balance between personal ambition and domestic responsibilities, the film very forcefully portrays unchecked ambition in a negative light. The “do whatever it takes to succeed” mentality has been the subject of scorn in many Disney/Pixar movies before, and has arguably been tackled best in “The Lion King.” In “Coco,” this dynamic is explored with a little less tact and emotional nuance, but nevertheless succeeds as a cautionary portrayal.

Being a Pixar movie, the technical direction of “Coco” astounds. Minute details such as hair, flower petals, and guitar strings are delicately animated, with each fine detail visible. Lighting falls naturally, in a hue and dimension that is somehow faithful to and surpasses the way light falls in the real world. To portray Dia de los Muertos, the color palette for “Coco” pops out of the screen in hues of deep blue, bright pink, and brilliant purple. All this attention to detail and beauty makes “Coco” a treat to look at.

This dedication to accuracy extends beyond the technical. According to a July interview with co-director of the film Adrian Molina, Pixar employees travelled down to Mexico to experience Dia de Los Muertos and speak with those who celebrate the holiday in order to assure nuance and accuracy of portrayal. From the marigold flowers, to the pan de muerto, to the ofrendas and more, the film makes a genuine effort to both faithfully portray the holiday and provide enough context so that audience members unfamiliar with Dia de Muertos may learn.

Beyond simply telling the beautiful story of a boy caught between family and ambition, “Coco” showcases the richness of a culture that has been all-too-maligned in recent years. More often than not in popular discourse, Mexican is equated with phrases such as “illegal” or “undocumented.” The actions of this current administration in particular have put the lives of many Mexican-Americans in jeopardy, and a productive discussion on immigration cannot occur if one side sees a group as more of a problem than a people. Popular media portrayals of Mexican and broader Latinx culture are one way to combat the ignorance and hate which has permeated American society, and “Coco” is a great contribution to that effort.

While “Coco” is by no means the best Pixar movie, its representation of, focus on, and care for a culture is admirable. It is worth mentioning that “Coco” came out on October 27th in Mexico, a full month earlier than in the US, and just in time for Dia de los Muertos. Movies like “Coco” move society closer to the day when a minority child can look up to the big screen and expect to see a hero that looks a lot like them.