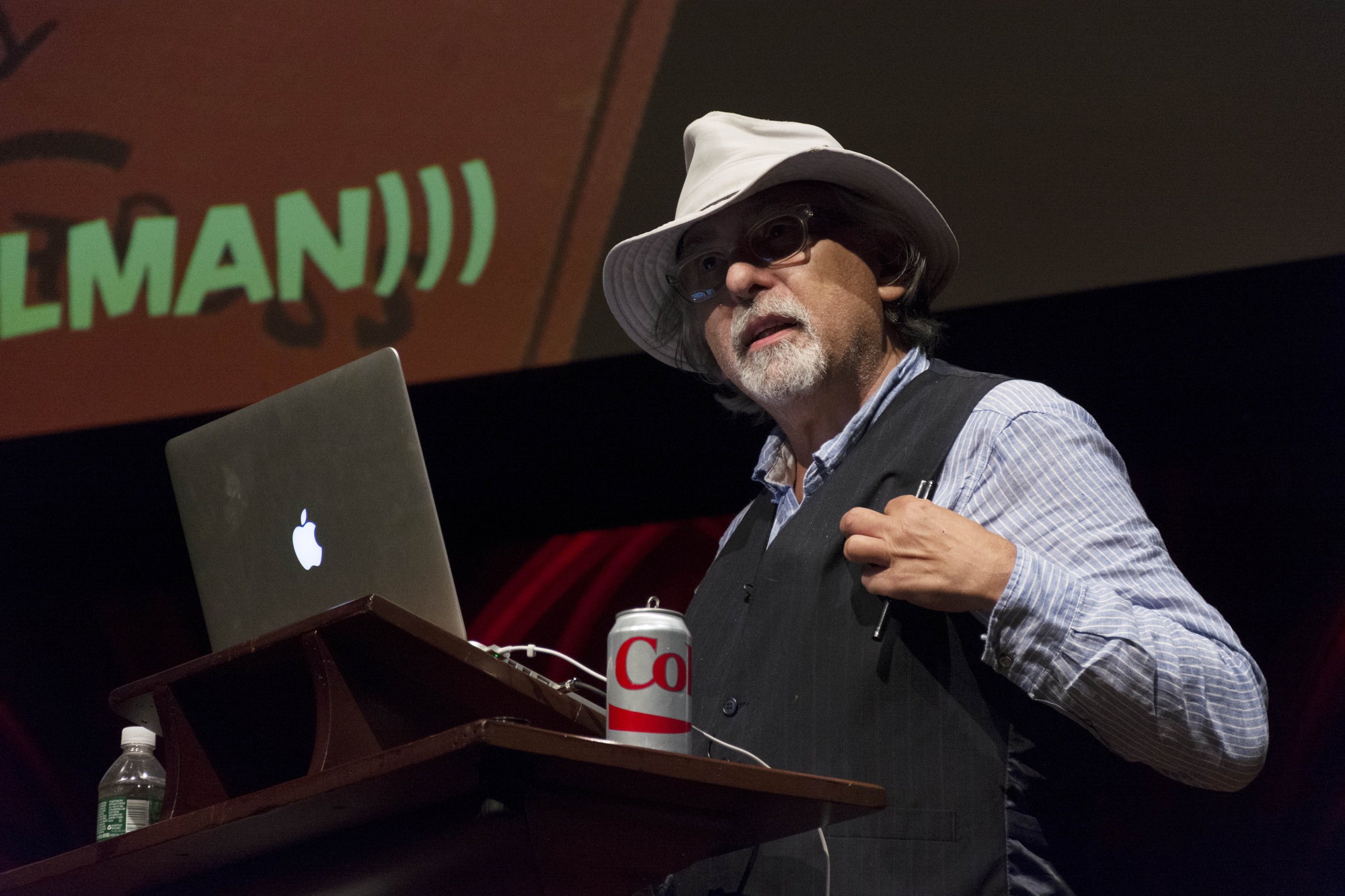 On Sept. 12, a crowd gathered in Sanders Theatre to hear Art Spiegelman, a Pulitzer Prize-winning author and illustrator, give a lecture entitled “Comix, Jews n’ Art? Dun’t Esk!” The lecture, hosted by The Center for Jewish Studies, took a close look at the art of comics, and its relationship to Judaism, a topic that Spiegelman said he discusses less frequently.

He even acknowledged his reluctance to talk about Judaism or the Holocaust. “I have a feeling I have been outed as a Jew,” he said. Judaism did come up, but as an aid rather than a focus. Spiegelman rattled off lists of Jews in comics, dedicating time especially to his hero Harvey Kurtzman of Mad Magazine. “I studied Mad the way some kids studied the Talmud,” he said. The author explained that comic books were like the “schmatte” —the rag—business, where Jews who had trouble getting into the gentile publishing houses could work.

Some attendees found that the more substantive discussion of Judaism and the Holocaust—the subject of his most famous book, “Maus”—was missing from the lecture. “There are a lot of [...] things that he kind of dodged altogether,” said Ariel R. Hecker ’21, who came to the event for his freshman seminar, “Heretics, Gangsters and Writers.” Hecker said he would have preferred to hear more about “Jewishness in and of itself rather than how Jewishness has affected the comic industry, which seems relatively superficial.”

For others, though, the shifted focus was refreshing. Audrey E. Stewart, a local resident who has studied the Holocaust, explained that Spiegelman’s work was useful to her as she studied Auschwitz. However, she appreciated the chance to approach the work from a different perspective. “I’m not Jewish so I haven’t really thought about American comics through history from the Jewish perspective, so it was nice to see that,” she said.

The crux of Spiegelman’s argument lay in his comparison of Yiddish and comic books. Like Yiddish, Spiegelman said that “comic books are a secular medium that’s a vulgar medium.” Just as Yiddish is cobbled together from several languages, comics are a combination of words and pictures. For Spiegelman, this vulgarity makes both Yiddish and comics more poignant. “It allows it to be supple, to speak with a real voice,” he said.

Spiegelman’s own presentation also embodied that no-nonsense character. The lecture was speckled with jokes, which ranged from a quip about Superman’s tights (“An übermensch who could leap tall buildings in a single bound and yet was circumcised”), to a takedown of Lichtenstein (“He did no more or less for comics than Warhol did for soup”), to political jabs (“If Trump were literate, I would have him read this”). Most jarring were his comments about World War II. “The Holocaust is the broken condom that allowed the birth of Israel,” he said.

In general, Spiegelman did not hesitate to say what he thought. “His character is that he’s provocative,” said Matthew M. Jelen ’21. “That’s just kind of part of the performance, so it was a little uncomfortable at times, but on the whole he had a lot of interesting insights and he’s coming from a very unique perspective.”

Spiegelman’s humor did not stop him from addressing some heavy topics. He argued forcefully for the emotional and even political power of comics. To illustrate this, he showed slides of “Corpse on the Imjin,” a poignant comic by Harvey Kurtzman about the Korean War. Spiegelman also pointed out that the shoes and twisted legs in Phillip Guston’s cartoon paintings alluded to the piled-up bodies of the Holocaust. Guston, born Philip Goldstein, also did political pieces, such as depictions of Nixon and the Klu Klux Klan. “He understands that there is an aspect of the Klan in everyone, including Jews who change their names,” Spiegelman said.

Spiegelman drove home his argument with a discussion of what he called “horror comics,” which depicted the Holocaust. In the aftermath of the war, there was no room for the Holocaust in popular culture, Spiegelman explained, and the horror comics changed that. “The horror comics were bringing to a secular war what had happened and been repressed 10 years before,” he said. Comics, Spiegelman argued, have an honesty and simplicity that made them well suited for this task. “Blank faces allow you to project emotion onto them,” he explained. The horror comics sparked controversy among Jews, some of whom went as far as to burn books.

Lisa E. Rivo, Co-Director at The National Center For Jewish Film, said that Spiegelman left her with a lot to think about. “He’s truly a brilliant man, artist, and thinker so it’s a treat to be able to see him,” she said. “You never know what’s going to happen, and you only know that it’s gonna be poignant and thoughtful, and that it will be personal and the beginning of thinking about the material, not the end.”

—Staff Writer Yael Saiger can be reached at yael.saiger@thecrimson.com