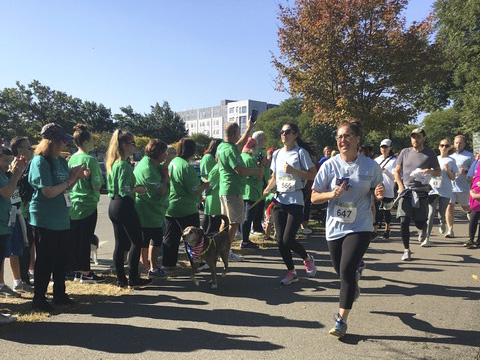 Sporting homemade T-shirts and pushing strollers, over 2,500 people took to the streets of Brighton this weekend for the Samaritans 20th Annual 5K for Suicide Prevention, jogging along the Charles for three miles in order to raise awareness and funds for those at risk of suicide.

Running among the crowd were roughly 20 Harvard undergraduates. They were there for Alexander H. Patel ’17-’18.

Patel, a Harvard undergraduate, died by suicide during his senior year last October, aged 22. Remembered by peers and faculty as not only a brilliant student of Philosophy and Mathematics but also an “incredible friend,” he spent his time at the College as a Computer Science teaching fellow and a research assistant to Computer Science Professor Margo I. Seltzer ’83. In April, the College launched a fund in memory of Patel to support a new group of student teaching fellows in the Computer Science department.

Patel’s sister, Jacqueline P. Patel ’21, said she organized a team of students to run the 5K in advance of the anniversary of her brother’s death. She described the team — comprising friends and blockmates — as a network of personal supporters.

Over a dozen Harvard students ran the Samaritans 5K for Suicide Prevention in honor of Alexander H. Patel '17-'18. By Molly C. McCafferty

“My team is basically composed of people who have been really supportive of me in the past year and are the reason why I was able to make it through this year,” Jacqueline said.

The group joined 157 other teams running the 5K, many formed in honor of loved ones lost to suicide. Every detail of the Patel team’s preparations was meant to memorialize Alex — even down to the email lists the team contacted with fundraising messages, Jacqueline said. The team solicited donations from groups that she, Alex, and their brother Dev A. Patel ’16 were involved in at the College — namely, their Houses, Quincy and Adams, and The Crimson, where all three siblings formerly served as News editors.

Alex reported on Harvard Business School for The Crimson and did work for the paper's data analysis team, at one point winning a national award for a data-based article on faculty political donations.

By Saturday morning, the team had raised over $1,600 to help fund crisis hotlines, community outreach, and grief support groups organized by Samaritans, a nonprofit dedicated to reducing suicide risk.

Jacqueline said she believes the fundraiser was a great way to keep her brother’s memory alive.

“After you have a memorial service, there’s not many things you can do to remember the person you lost,” Jacqueline said. “This is a cool way where I still get to remember Alex, but also raise money for a really good cause and bring my friends together to remember my brother at a time of year that’s super difficult for me and my family.”

The mood of the 5K, held on a cloudless late-summer morning, was more festival than memorial, with raffles, food trucks, and a tie-dye tent set up at the starting line. During registration, the sounds of Beyoncé and Katy Perry filtered over loudspeakers and the mascot of the Boston Red Sox weaved through the crowd giving high-fives.

When the time came to start the race, participants ranging in age from toddlers to retirees took their marks behind a 20-foot arch of green and white balloons, many with dogs and strollers in tow. Friends and family lined up to cheer along the route, many wearing colorful homemade T-shirts bearing the names and photographs of lost loved ones.

Byron S. Hurlbut ’21 said the team of undergrads “were not running the race to win.”

“We all finished the 5K, which was good,” Hurlbut said. “I think it was just an amazing show of solidarity from us, but also to see so many people at the Samaritans race, all of whom have been directly affected by suicide, and to know that support network exists, and to see how much people care about this issue.”

Jacqueline said the fundraiser could potentially become an annual tradition.

“Definitely I’m super interested in repeating this, but I’m really just kind of looking at this year and looking at this race, and doing it with my friends, and taking it just one step at a time,” she said.