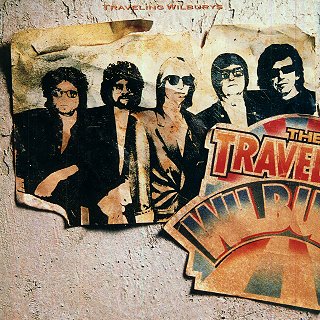 By Courtesy of The Traveling Wilburys
By Trevor J. Levin, Crimson Staff Writer

By Courtesy of The Traveling Wilburys

Some of the most transcendent moments of the last decade in music resulted from high-profile hip-hop collaborations: Nicki Minaj’s verse on Kanye West’s “Monster,” George Clinton and Thundercat’s contributions to Kendrick Lamar’s “Wesley’s Theory,” and the endless rotating cast of features on Travis Scott’s “Astroworld.” These appearances sometimes seemed to give the guest artists even greater focus than in their own work, and they responded with ambition and excellence.

But none match the collaborative spectacular of the Traveling Wilburys for sheer delight. The project emerged from the B-side jam sessions of George Harrison, Bob Dylan, Tom Petty, Roy Orbison, and Jeff Lynne, which they enjoyed enough to record a full pseudonymous album, “Traveling Wilburys, Vol. 1,” which they released 30 years ago earlier this month.

Like George Clinton’s somewhat anachronistic but welcome presence on Lamar’s track, the Wilburys have an intergenerational charm. Orbison, the oldest, was one of the earliest stars of rock and roll as a codified genre. He and Dylan clearly had a strong influence on the Beatles (of which Harrison was, of course, a member). And although any description as “Beatlesque” is necessarily fraught, Lynne (of Electric Light Orchestra) and Petty bear the Fab Four’s influence about as strongly as any artist since. Perhaps because of this dynamic — the elders relaxing among their fans-cum-bandmates, the youngsters on the top of their game to impress their idols — “Vol. 1” somehow manages to be more than the sum of its stars’ earth-moving talents.

As Harrison might have recalled from his alter ego project 21 years earlier, the mask of a fake band encouraged creativity and humor. How else could Dylan, during a streak of commercially unsuccessful and critically panned mid-’80s albums, have written “Dirty World,” whose very funny couplets belie its narrator’s melange of jealousy, hurt, lust, and misogynistic contempt, or the even funnier Springsteen parody “Tweeter and the Monkey Man”? Petty’s “Last Night” and “Margarita” likewise contribute a down-on-their-luck ethos to the myth of the traveling brothers. Harrison’s songs “Handle with Care,” “Heading for the Light,” and “End of the Line” don’t fit quite as well in the concept, but they’re the best and catchiest tracks on the album, radiating the joy of a man back in a band for the first time in 17 years. Three decades after its release, the record demands a listen less for the novelty of all of its star power on the same tracks — especially after so many tribute concerts and Rock and Roll Hall of Fame reunions — than for the chance to see these figures in this particular mood: chummy, irreverent, relaxed.

Although some members (Dylan and Harrison) take up much more space than others (Orbison), the super-supergroup shares the spotlight enough that their subtly different styles give the best songs a dynamic multi-part structure. “Handle with Care” starts with Harrison’s looping guitar riff and in-the-clouds vocals on the verse, switches to a romantic pop melody for Orbison’s chorus, and turns up the cowbell for Petty and Dylan’s gravelly country-rock verse, all united by Lynne’s gleaming (if dated) production.

On “End of the Line,” an anthem to optimism and individualism, the singers simply trade off the melody, a unity among the aging rockers that gives a special resonance to lines like “Well it’s all right, / Even if you’re old and gray / Well it’s all right, / You still got something to say.” That line serves as a sort of motto for the band: They all did have things to say. It just took each other to bring it out.