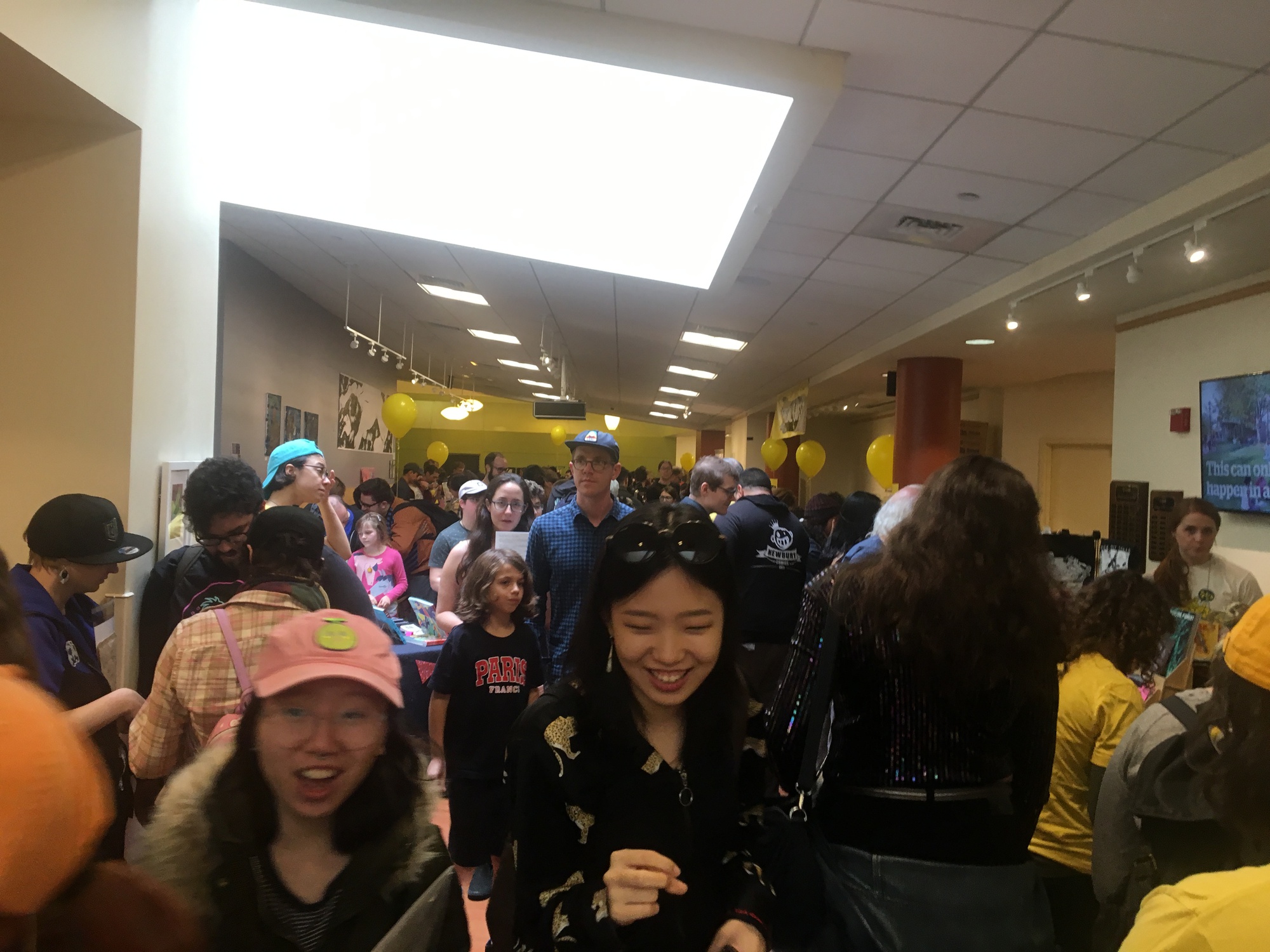 Caroline Hu has always been a drawer, a scientist, and something more that uniquely lies at their intersection. She grew up reading Japanese manga and learning about brain behavior in animals. Now a biologist at Harvard University, Hu views her skills in illustration as essential in communicating scientific concepts and has found that her comic creating has also been affected by her passion for animals. “These are 24-hour comics. Both of them are inspired by the life cycles of other animals. One of them is more thematically related with birth, and one of them is more related with death,” she says as she holds up two thin booklets. “Who doesn’t wonder about these things?”

Hu is in just the place to find an answer to her question, tabling at the Massachusetts Independent Comics Expo (MICE). The event, taking place Oct. 20 and 21, brought comic creators and audiences of all types together in Lesley University’s University Hall to mingle and enthuse over the local comics scene. Inside MICE, there are comics of every type. Some are like Hu’s zines, thin booklets or even a few stapled pages. Others are thickly bound graphic novels or anthologies. Others are sketches or art prints. All belong in the world of independent comics.

“Because there’s no one above us giving us money to specifically do stuff, we have the freedom to do whatever we want,” says comic creator Neil Johnson says. “If I have a cool idea, I can work on it for three months, go to Staples, cut it, print it, and then sell it.” MICE’s diversity of comic type and content reflects the reverence it gives to the art form.

“It’s the heart and soul of the medium itself,” fellow creator LJ Baptiste adds. “Every creator starts off drawing and stapling comics at home, self-publishing.” Independent comics provide an unfiltered look into the mind of their creator. Without corporate oversight, the artists are free to say what they want to say and how they want to say it.

This is clearly visible at the expo. Comics range from Hu’s science-based stories, to folktales, to parenting tips, to dramas about unwanted children. “Whatever you’re into, you’ll walk around and find two or three other people interested in the same thing,” comics creator George O’Connor says.

MICE also allows event attendees to engage with creators. It is focused not just on the art but the creative process behind it. “We wanted to emphasize the artist gallery aspect of a comic convention,” MICE co-director Shelli Paroline says. “It gives people the opportunity to meet right with artists and ask, ‘What were you thinking when you came up with this comic?’ ‘What are you working on next?’” The event included a number of panels where artists discussed how they deal with their own creative processes and larger issues like mental health, activism, gender, and race in addition to hands-on workshops where attendees could improve their own comic skills.

However, many attendees like Dina Bedri simply enjoyed how accessible the event was. “It’s small and quick. You can pop in and out the whole weekend. Larger comic conventions are a whole-day commitment and very overwhelming, but at MICE I can do something else with my day and still engage with artists about their work in a deeper, more meaningful way.”

MICE also provides a place for artists to meet one another and learn about supporting organizations like the Boston Comics Roundtable. This is especially important for younger artists like Tim Peacock, from Brooklyn, New York, tabling at a convention for the first time. Knowing other artists who share your passion can be a make or break moment in improving and publicizing your own work, and MICE can create an atmosphere for this to take place. “The community is amazing,” Peacock says. “It’s the most positive environment for comics I’ve been in in a while, everyone is really supportive, and the staff is very nice.”

Toward the front doors of MICE, the table for the Graphic Artists Guild of New England offers a different kind of support. “We help people get started. Comics have a business side to them, but a lot of people don’t teach that part,” Priscilla Alpaugh, a member of the guild, says. The 50-year-old organization publishes a compendium on the comics business “Graphic Artists Guild handbook: pricing & ethical guidelines,” among other activities, to help artists manage the business side of comics-making. Their most recent efforts have been advocating for a small claims court for copyright disputes. “Anybody here, who’s making images, if they’re up on the internet, people could steal them so easily. With legal fees, it’s very hard for creators to fight for their work, so we’re advocating for a small claims court so creators don't have to incur these costs,” says Alpaugh.

At its core, the Massachusetts Independent Comics Expo is a celebration of independent comics and the freedom associated with owning your work. “There’s no limit to what you can create besides what you can draw,” says Peacock. “Unlike movies, you don’t need a huge budget, it’s just your pen, paper, and imagination.” The event offered an opportunity for impassioned comic readers and makers to connect on a deeper level with one another on the art they enjoy and support up-and-coming artists in the whirlwind of the industry — to see art happening at its purest and most unfiltered.