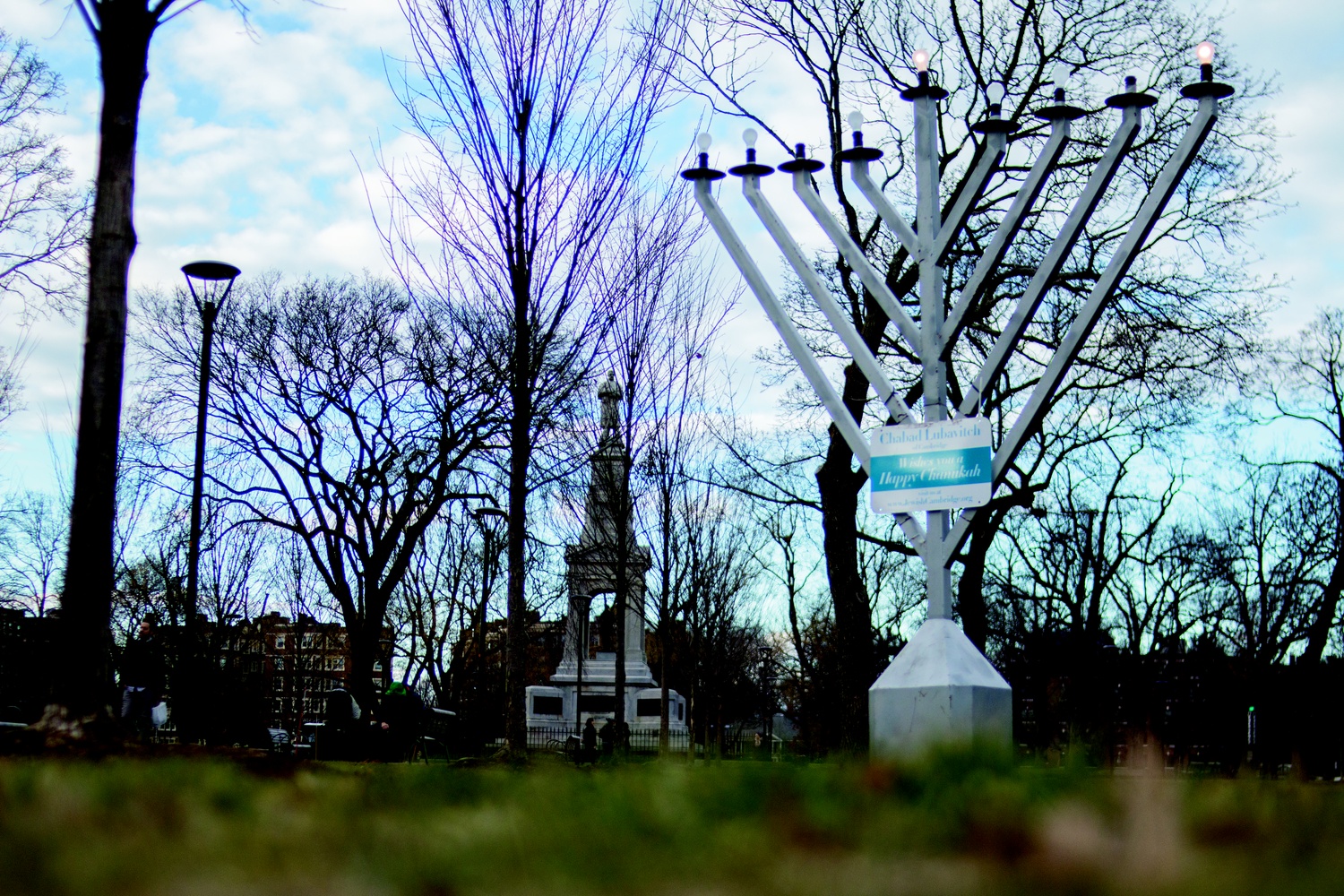 The menorah standing in Cambridge Common, which a man toppled over Sunday in what police are investigating as a "possible hate crime." By Caleb D. Schwartz
By Molly C. McCafferty, Crimson Staff Writer

Two witnesses reported Sunday that around 3:30 p.m., a white male dressed in all black approached the menorah riding a black bicycle, Cambridge police spokesperson Jeremy Warwick said Monday night. The man then dismounted his bicycle, walked over to the menorah, and pushed it to the ground.

Several bystanders stood the menorah back up shortly thereafter and then an older man led the group in a Hanukkah prayer, Universal Hub first reported.

Rabbi Hirschy Zarchi, the founder and director of Chabad, said the organization has placed large menorahs on Cambridge Common and in other locations across the city for the past 19 years. Though the menorahs have been vandalized in the past, this is the first time it has happened “in broad daylight,” Zarchi said.

“It was really, you know, hateful,” Zarchi said. “He didn't really care the fact that he was being observed and that there would be witnesses to it.”

“I wish I could say we’re shocked,” he added.

Last year saw a nearly 60 percent increase in the number of anti-Semitic incidents reported in the United States — the largest single-year increase on record, according to the Anti-Defamation League. In October, 11 people died and six were wounded in a mass shooting at the Tree of Life Synagogue in Pittsburgh, Penn., the deadliest-ever attack perpetrated against Jews on American soil. And last week, a Columbia psychology professor’s office walls were vandalized with anti-Semitic graffiti.

The New England branch of the Anti-Defamation League tweeted about the incident on Cambridge Common Monday afternoon, calling it “unacceptable.”

“Religious freedom means all faiths have to right to pray & celebrate without fear or intimidation,” the tweet reads.

The Criminal Investigations unit of the Cambridge Police Department had not yet identified a suspect as of Monday evening, Warwick said.

Incoming Harvard Hillel president Rebecca Thau ’20 said the executive director of Hillel, Rabbi Jonah Steinberg, has been in “constant communication” with the Harvard University Police Department since the Tree of Life shooting. HUPD has since routinely stationed a car outside of Hillel.

Outgoing Hillel President Corey A. Gold ’19 said that though the incident left some students “very unsettled,” he believes most Jewish students feel safe at the University.

“I think that HUPD and the Cambridge police are taking perceived threats and real threats very seriously, especially during this especially sensitive time for the Jewish community,” he said.

Ultimately, Zarchi said he hopes people focus on the effort passersby made to restore the menorah — an action he called “a little modern-day Hanukkah miracle.”

“You see these wonderful people — wonderful people who we don't know and could be some even not of the Jewish faith — who were disturbed by what they witnessed and immediately sprung into action to restore it and to bring the menorah to its full glory,” Zarchi said.

Chabad student presidents Gabriela J. Siegal ’20, Anne A. Rosenblatt ’20, and Hannah K. Harris ’20 wrote in an email that they “condemn this act of vandalism,” but nevertheless will continue with their Hanukkah celebrations.

“We appreciate the efforts of the Cambridge community members who took the time to restore our menorah,” they wrote. “Despite the rise of anti-Semitism, tomorrow at 5pm, we will gather as a community on the steps of Widener library to light the Hanukkah candles with President Bacow.”