Dissecting Whiteness in the American Poetic Canon with Claudia Rankine 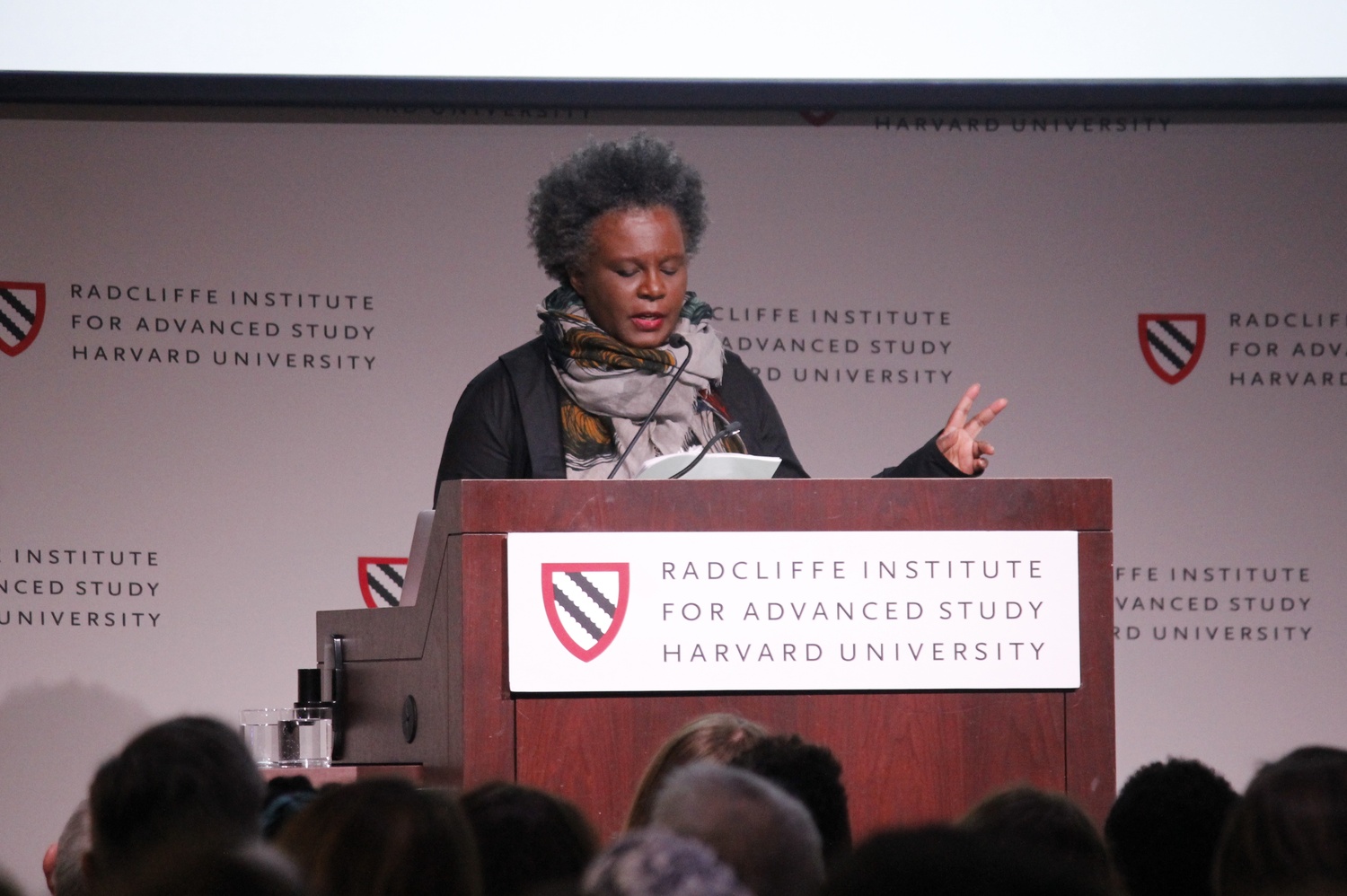 Claudia Rankine is not just a creative jill of all trades, but a master of every single one. It comes as no surprise, then, that when the poet, playwright, essayist, editor, and professor took the stage Feb. 15 at the Radcliffe Institute of Advanced Study, the room, filled to capacity, erupted in thunderous applause. The applause faded to attentive listening as Rankine introduced her talk, “The Racial Imaginary and American Poetry,” focusing on the received neutrality and cultural dominance of whiteness.

Rankine, the author of “Citizen: An American Lyric,” examined the way whiteness pervades American culture, and how this dominance is so often ignored by canonical white writers. “To write about race in the mind of many white writers has little to do with investigating whiteness,” she said. Further, Rankine discussed how the people in these authors’ works are presumed to be white simply because they are people. She added, “Whiteness as universal, nonpartisan, neutral, and normal is an equation that rules journalism, non-fiction, and creative writing, which is to say it rules the culture.” In this way, whiteness persists as the cultural standard.

Rankine blended her discussion of the urgently timely topic with quotes from other prominent racial thinkers, particularly one from James Baldwin about the danger of silence. She delivered the final words of Baldwin’s quote saying, “It takes no time at all before we cannot talk about anything, before absolute silence descends.” Then she gave the audience a command: “Now think about people’s hesitation to talk about race in this country.” Rankine directed her gaze forward and stopped speaking, creating space for contemplation, and coyly slipped on her glasses to punctuate the effect of her request.

In 2016, Rankine, along with a group of other creatives and activists, founded The Racial Imaginary Institute, or TRII, to engage with and demystify whiteness in American culture. The “cultural laboratory,” as the poet calls it, sponsors programming that includes art exhibitions, readings, and dialogues in cooperation with other groups and artists. TRII seeks to counteract the feeling of white endangerment in America that came to a head in 2016, despite continual white dominance. In the spirit of the mission of her organization, Rankine went on to discuss a number of mainstream, American poets with a disclaimer: “My ulterior motive here is partially an open invitation to consider both what you produce and how you read and critique within the frame of white dominance.”

To illustrate both the execution and the importance of this work, Rankine examined pieces by prominent poets including Walt Whitman, Gertrude Stein, Robert Lowell, and Allen Ginsberg. Rankine used history, research, and literary selections to contextualize and expose both explicit and implicit racism within the American poetic canon. Beginning with Whitman, Rankine used analysis of the writer’s personal racism to preface her discussion of race in one of his most popular works, “Song of Myself.” She revealed the contradiction in Whitman’s advocacy of abolition alongside his desire to see the black race eradicated. His motivations in supporting abolition were not in the interest of human rights, but rather in the interest of eliminating the “black tide” taking jobs from working white men. Rankine used this context to frame the lack of racial awareness in Whitman’s work and the work of other writers.

“I really enjoyed the way she walked us through these kind of case studies of poets,” said audience member Caitlin E. Gianniny. “I don’t have a background in poetry, but doing that kind of breaking down of those kind of small shifts in language is a really interesting way to come at looking at that.” Gianniny said she is trying to write and to think more on whiteness herself.

“I love Claudia Rankine, I love ‘Citizen,’ and I really appreciated the kind of deep dive into the language of poetry and how white supremacy is evident in poetry,” said Bostonian Mardi J. Fuller. “It’s not something that I looked into before. It’s really provocative.”

Rankine closed her talk with a viewing of the opening of Stanley Kubrick’s 1999 film “Eyes Wide Shut,” with a recording of Tracie Morris’s book “eyes wide shut: a not neo-benshi read,” superimposed over the audio. The piece analyzes the racial and power dynamics of the movie in the form of clipped, repetitive sentences–the first one, eight repetitions of the phrase, “The scariest people in the world are not Black.” Rankine did not speak further, letting the work speak for itself.