Lin-Manuel Miranda Urges Students Not to Throw Away Their Shot 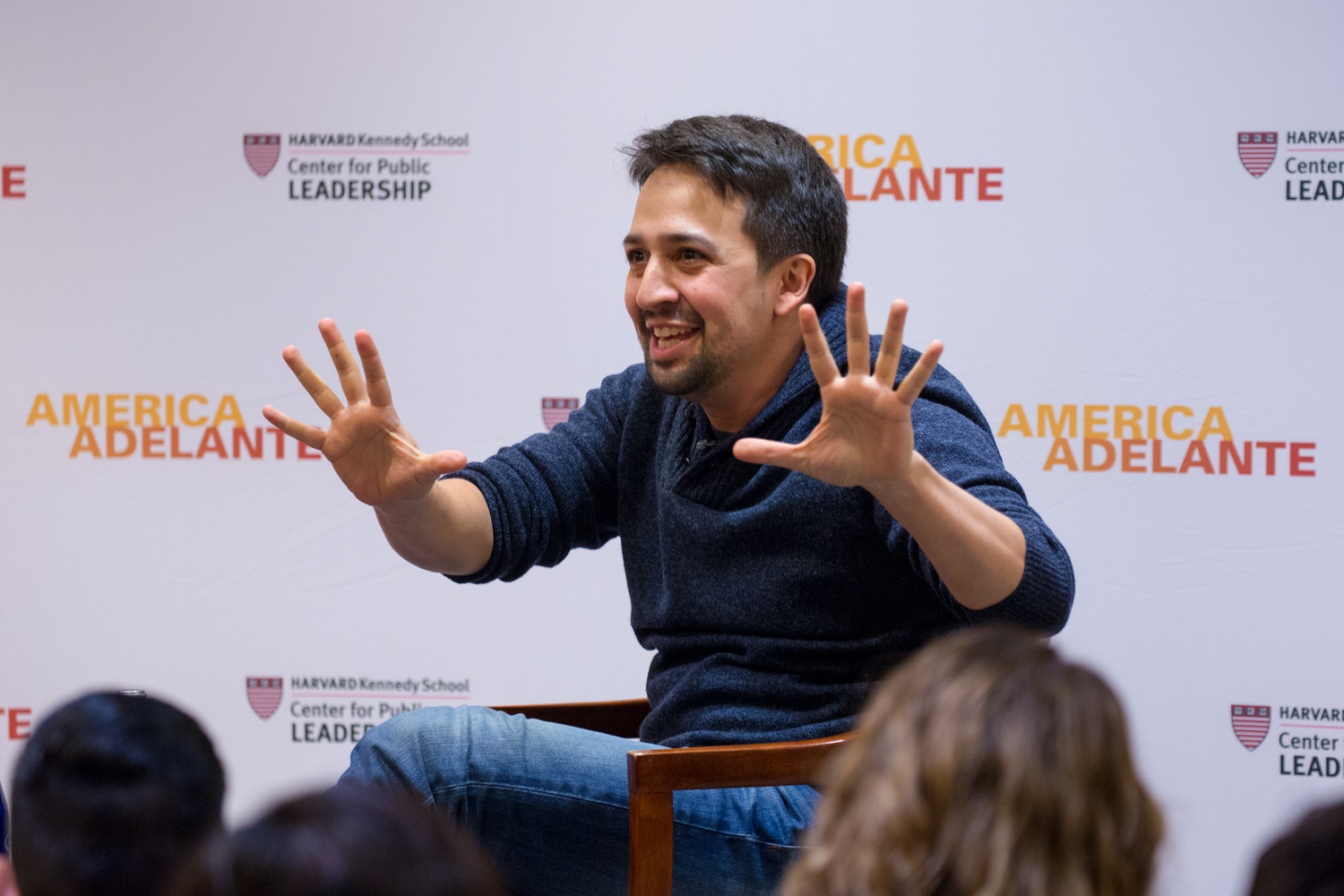 Actor, composer, and activist Lin-Manuel Miranda, famous for creating the renowned musicals “Hamilton” and “In The Heights,” took to the stage at the Harvard Kennedy School Thursday, at the kickoff event for the second annual “America Adelante” conference.

A crowd of over 100 gathered in the room where it happened, to hear Miranda speak about his career, and how he has gained success in a field historically absent of Latinx individuals.

The two-day conference, featuring 45 Latinx leaders, politicians, and activists, is hosted by the Center for Public Leadership with the goal of connecting Latinx leaders with Harvard Latinx students and “accelerating the influence of Latinos across the U.S.”

“I’m starstruck, but not for the typical reason,” said Amanda R. Matos, a Kennedy School student and fellow at the Center for Public Leadership, who moderated the conversation with Miranda.

“It’s not because of ‘Hamilton’ or ‘In the Heights’ or anything like that. I’m honestly just starstruck because it is rare for me to be in spaces with other uptown New Yoricans.”

The two New Yoricans—a phrase coined to describe Puerto Ricans living in New York—discussed topics ranging from New York baseball teams to growing up in bi-cultural settings, and the difficulties that come with being a first-generation college student.

“Art is the thing that allows us to engage with the other side on not an ideal level, on a human level. I think our stories are more necessary than ever when, when, people are painting us with the same brush,” Miranda said.

Miranda said the music and lyrics he wrote for “In the Heights” were inspired by disappointment in the portrayal of Puerto Ricans as violent gangsters in the musicals “West Side Story” and “The Capeman.”

“I think ‘In the Heights’ began with the death of ‘The Capeman.’ It was a punch in the stomach because my heroes had created something that didn’t work,” Miranda said. “It was like that cool water in the face like, ‘Hey! No one’s making your dream musical. You go make your dream musical!’”

Miranda also spoke on his activism following Hurricane Maria and called on students to take on a cause that matters to them.

“The one that bugs you in the shower, the one that keeps you from sleeping at night—that's the one you have to get to work on the next day, because it will feel meaningful to you and we need it. We need it on all fronts,” Miranda said.

The late Lisa M. Quiroz ’83, was a driving force behind the creation of this event last year, Erika O. Carlsen, the assistant director for fellowship programs and Latino initiatives at the Center for Public Leadership, said.

In a tweet posted by Miranda, he said Quiroz requested he headline this event before she passed away. Miranda said he doesn’t usually have the time to attend many events, but came to honor his promise to Quiroz.

Several students were thrilled to hear Miranda speak, and drew inspiration from the words he shared.

“To be in a room at Harvard with someone who you can connect to on a very personal level, and then to hear him speak about his experiences, it felt really validating,” Aranza Caballero ’20 said. “I felt, personally, really inspired and motivated to keep going because regardless of what happens in our nation, there will always be a person who is trying to make things better.”