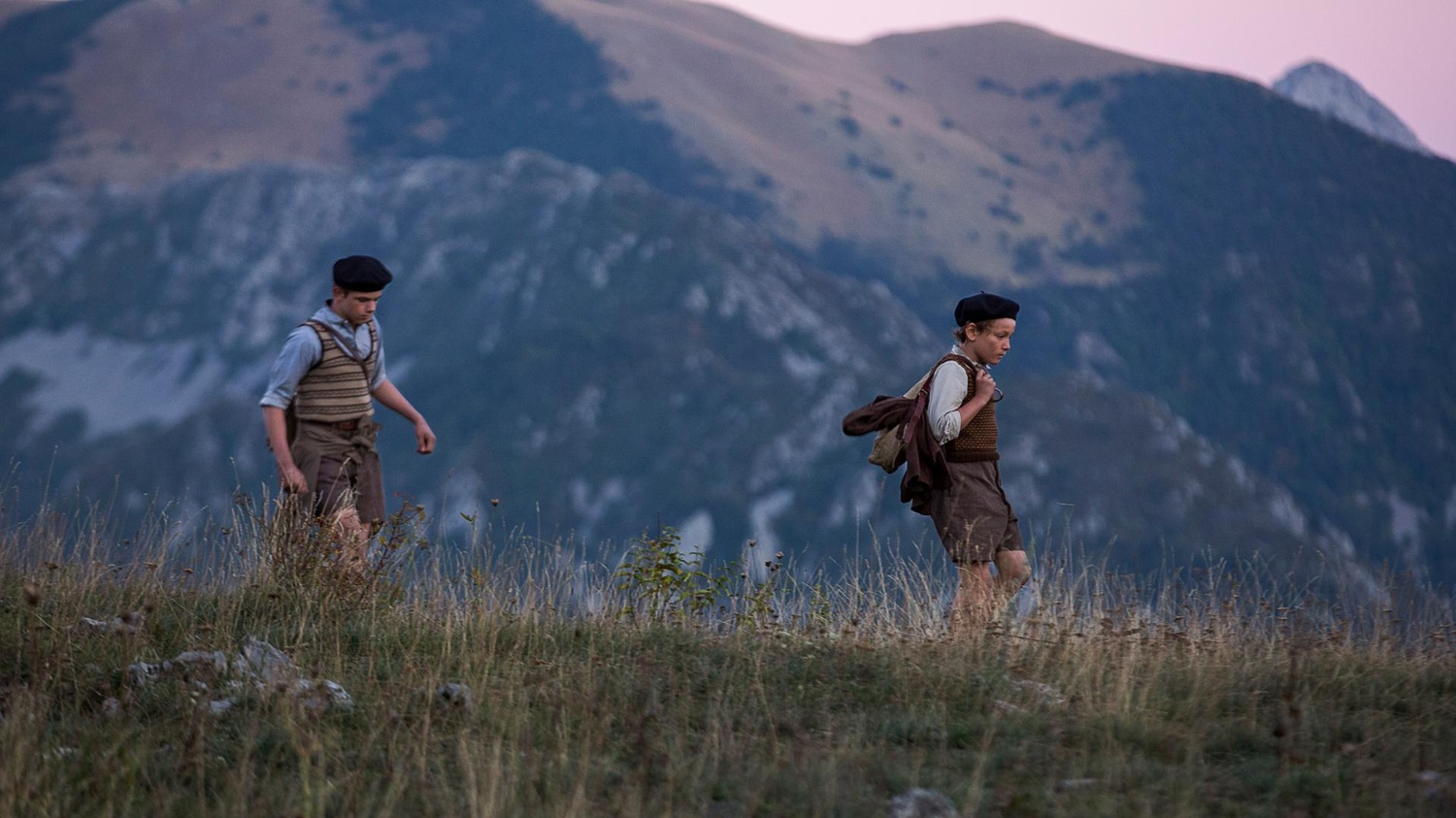 Dorian le Clech and Batyste Fleurial star in “A Bag of Marbles,” directed by Christian Duguay. By Courtesy of Gaumont
By Mason P. Sands, Contributing Writer

In “A Bag of Marbles,” two brothers, Joseph “Jo” Joffo (Dorian Le Clech) and Maurice Joffo (Batyste Fleurial), flee from Paris in the middle of the night to escape Nazi persecution in occupied Vichy, France. The two youngsters make their way from place to place, often only evading capture due to luck or goodwill. The French-language film is a harrowing tale of hatred, separation, and death, like many films about the Holocaust, for example, “Sophie’s Choice” and “Schindler’s List.” However, it adds to our understanding of this human tragedy, speaking powerfully about finding joy and love amid times of great darkness. And, while the movie is based on the autobiography of French Jewish author, Joseph Joffo, the boys’ flight to freedom makes a wider statement of the mentalities of the victims, witnesses, supporters, and humanitarians of this tragedy that scarred the first half of the twentieth century. Ultimately, “A Bag of Marbles” highlights that even in great hardship, one can still find and enjoy times of happiness, love, and lightheartedness, a testament to Jewish resilience during the Holocaust.

Unlike other films of its genre, “A Bag of Marbles” is able to have lighthearted moments by giving its protagonists the advantage of preparation. Joseph and Maurice Joffo only have one advantage, and that is time. Following an order that all French Jews are to wear a yellow star, their parents quickly realize the way the winds are heading and adequately prepare the boys with money, a travel plan, an order to never reveal they are Jewish to anyone, and assurances they will reunite in Nice before sending them off. The boys’ preparation and greater understanding of their situation, which do nothing to minimize the danger of their plight, make for a lighter movie than “Schindler’s List,” “Sophie’s Choice,” and “Life is Beautiful.” The boys luckily have a plan, keeping them one step ahead of the Germans and enabling the film to focus more on brotherly bonding and horseplay. One fond moment is their first steps into the Free Zone, an administrative area under the control of the Nazi-collaborating Vichy regime. After Jo is shot in the foot, Maurice carries his little brother on his back and says, “It’s only natural. You’re my little bro. I’d carry you to the end of the world.” This lasts for about two seconds before Maurice complains about his brother’s weight and puts Jo down, who jokingly replies, “To the end of the world?” After arriving in Nice, being reunited with the family, and being presented with papers, the tale of the brothers isn’t one of hiding or feeling from place to place under the cover of night, but of avoiding detection, allowing them to actually find some joy despite fear.

Director Christian Duguay masterfully uses wavering definitions of image and lighting to show the feelings Jo associates with his memories and to give access to his thoughts while he is constantly threatened. Throughout the film, positive memories, such as the reunification of the family in Nice and the journey of the two brothers through the Free Zone are depicted in bright lighting and a gloss that serves to make the entire scene shine with a luster, but blurs the usually high definition of the individual figures within it, suggesting impermanence. In contrast, negative memories are stark and well-defined, often in dark yellows and browns. By associating color and scene clarity with Jo’s emotional perceptions, Duguay offers the audience a clear insight into the mind of his protagonist, an established pattern that he later uses to disrupt an initially benign scene during Liberation Day. At first, the scene is brightly lit and glossy. But once a mob enters the home of a staunch Petanist (a Nazi supporter) to harass him and his family, the colors become starker and the lighting darker. Already, Duguay’s filmic language makes an important statement on how violence begets violence and how Jo relates to this revelation.

Jo’s feeling about the Peronist (a supporter of Argentine leader Juan Perón) who had unwittingly hid him from Nazi persecution for some time suggests the film’s larger elucidation of how the war and antisemitism have affected all aspects of French society. For as much as the narrative is centered around Jo and his brother, it is as much about the people they encounter and how these people relate to the Holocaust. The film depicts how coyotes (human smugglers), collaborators, Catholic priests, resistance fighters, and Jews view themselves in the conflict. A trustworthy coyote helps Jo and Maurice along with another fleeing family across the demarcation between German-occupied France and the Free Zone. Despite the coyote’s kindness, he is not exempt from a desire for money—namely 1,000 francs a head. A powerful and complex story works behind each character and his or her motivations, jointly brought to life by good writing and good acting.

This coupled effort manifests in the character of the father, Roman Joffo, whom actor Patrick Bruel embodies excellently. After fleeing from Russian pogroms (organized massacres) to Paris as a child and now having to see his own children flee Paris, Roman has great wisdom and understanding of the recent developments in France but also wishes to spare his family from the culture of fear and demoralization inherent to their escape and the reason behind it. Bruel works with the script to give Roman a certain world-weariness and gravitas. Despite the father’s constant optimism and promises, Bruel highlights the fact that there is always something darker behind his eyes. When Roman must be rough with his children to give them some inkling of the danger they are in, Bruel brilliantly plays simultaneous heartbreak, resulting in some of the most tear-inducing, empathetic moments in the film.

By virtue of the horrific nature of the Holocaust, the film’s setting is provocative enough to induce great emotion as the depths of human barbarity are revealed. “A Bag of Marbles” strives to tell a different story. The situation of Jo and his family allows for good as well as bad memories during years of death and loss. In showing this balance, the film emphasizes the resilience and bravery of Jewish families to find light and laughter against the darkest backdrop. It also tells the stories of others in World War II France and how they relate to the war, giving the audience a greater understanding of French society in a time of great division, war, and horror. Just after crossing the demarcation point and arriving in the French Free Zone, the brothers sleep in a barn, where Jo asks his brother if they are finally “free to be Jewish,” to which his brother replies, “Free to sleep, numbnuts.” This film brings to light what Jo and his family could not at the time: The many manifestations of the Jewish struggle during the Holocaust and their experience with the resistance, their families, and the collaborators.