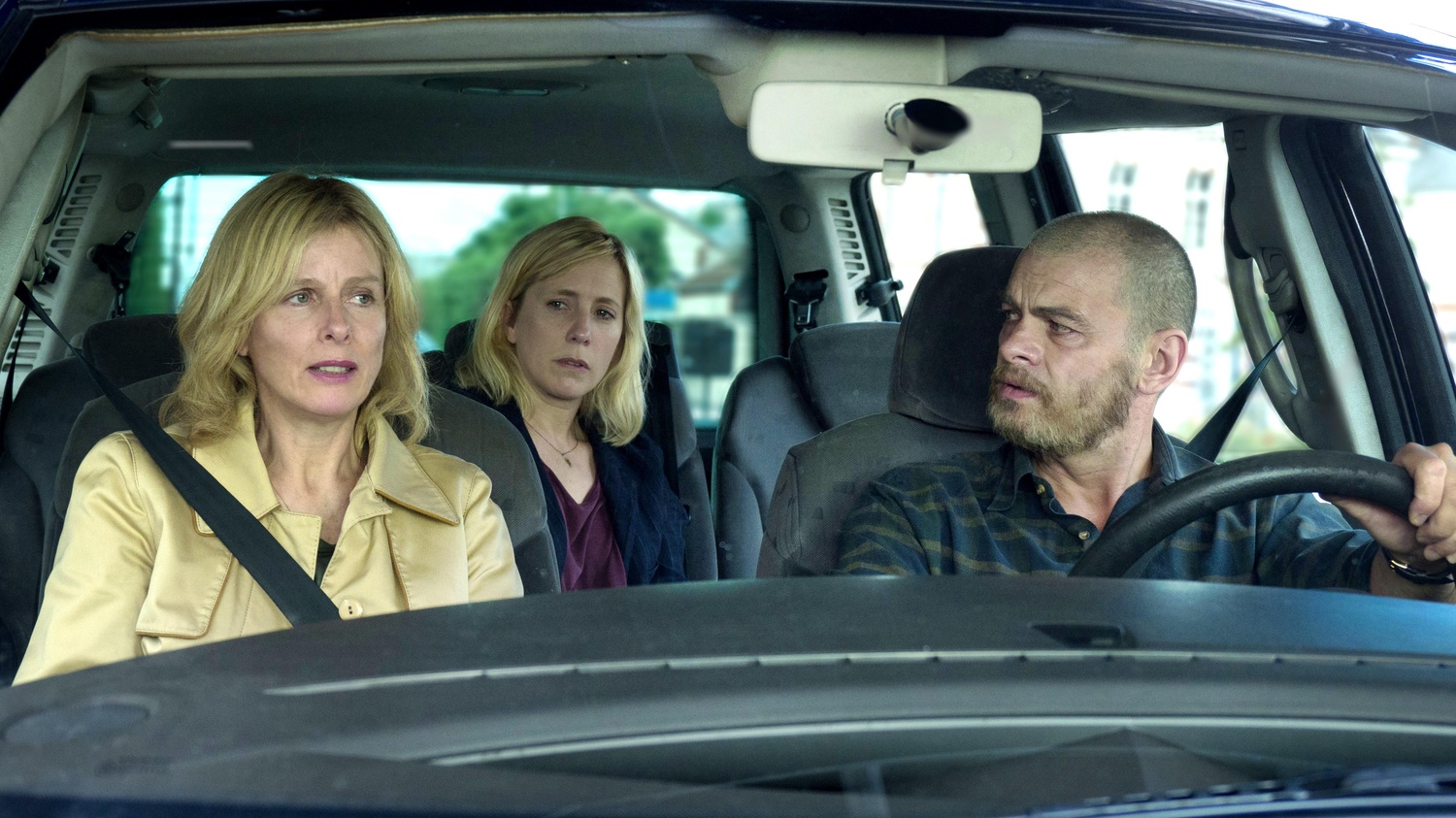 Karin Viard, Andréa Bescond, and Clovis Cornillac star in 'Les Chatouilles' ('Little Tickles'), directed by Bescond and Eric Métayer, which premiered at the Cannes Film Festival in 2018. By Courtesy of Festival de Cannes
By Caroline A. Tsai, Crimson Staff Writer

“It’s no technique, but real emotion,” a dance instructor praises Odette. She has just performed an interpretive dance, a demonstration for the other students in the class. They watch her reverently.

“I mean, there is technique,” the instructor corrects himself. “But you dance a state of being. It’s the state of a little girl suffering.”

Here, Odette blanches. The instructor’s response is one of many lines in “Les Chatouilles” (which translates to “Little Tickles”) that is unwittingly accurate. Odette Le Nadant, now a grown woman, has not been a little girl for many years. But the vestiges of her girlhood trauma color her adult life in ways she never could have predicted or controlled. Odette (played by writer-director Andréa Bescond) was once the victim of repeated childhood sexual assault, targeted by Gilbert Miguié (Pierre Deladonchamps), a family friend who claimed to see Odette as the daughter he never had and whom Odette’s parents trust with their lives. As Odette grows up, she bounces from dance, to drugs, to casual sex, anything to forget the trauma she endured as a child. But when she begins to see a therapist (Carole Franck), she learns that she must confront her abuse head on, no matter how painful it might be to relive—if not for her own sake, then for the sake of his next victims.

“No technique, but real emotion” might be a fitting description for “Les Chatouilles,” which toggles back and forth between flashbacks to Odette’s complicated past and numerous sessions with her therapist, in which she comes to terms with her history of abuse and begins to take action against her rapist. But Bescond, whose one-woman show is the film’s source material, and her creative partner for the film, Métayer, demonstrate their immense capacity for form as well as content, blending visual styles and mediums that structure Odette’s story: Interpretive dance over a stark black background expresses a range of transcendent, ineffable feelings that even the best dialogue or acting ever could. At first, the film’s dizzying leap from one temporal setting to another can be jarring, not to mention a bit off-putting so soon after the initial implied abuse. (And Bescond and Métayer all but show the abuse on-screen, the camera strategically angled a few inches too high.) But after the first act, the fast-paced jumps become par for the course for Bescond’s own story—one whose retelling is complex, painful, and at times, surprisingly funny.

In imaginatively-filmed therapy sessions that blur the boundaries of time and factuality, Bescond and Métayer show us what should have happened, what Odette wishes she could believe—she appears at the Opéra alongside famous Russian ballerina Rudolf Nureyev, she takes her best friend Manu (Gringe) to see krumpers in America, and most crucially, her father bursts in on Gilbert when he tries to molest her and violently retaliates—but each time, they deflect to the sad reality. She gets rejected from the Opéra school. Manu ends up in a cell, presumably for drug dealing. And we watch helplessly as Gilbert leads Odette into her bathroom, then closes the pink door. The constant rewriting of the truth and the film’s differing timelines would be confusing, if not for Pierre Aïm’s cinematography. Scenes cut swiftly from one to another, swirling past and present, scene and choreography into a continuous experience that preserves the substance of Bescond’s original play. Bescond imbues both her acting and choreography with a kind of urgency that’s enough to make anyone want to jump inside the screen and save Odette themselves, instead forced to clench their fists and helplessly witness her abuse as it plays out, wishing someone in her world would notice and rescue her.

If anything, “Little Tickles” is a testimony to the difficulty of survival after abuse. Odette’s coming-of-age entails more than a couple alcohol-fueled, drug-addled benders, sabotaging her relationships and professional dance career along the way. It does not shy away from the degree of immense fear and self-doubt that comes with confronting sexual abuse. “Why’d he keep it up? He could tell I didn’t like it,” the grown-up Odette muses out loud, watching from the sidelines as she watches Gilbert molest her younger self in a memory. “It’s rape, Odette,” her therapist says. It’s a simple statement, but a meaningful one, which confirms the validity of Odette’s experience—more than can be said about Odette’s own mother, Mado (Karin Viard), whose feelings of reluctance (“Let’s not rush to conclusions,” she cautions when the truth comes out) evolve horrifically into outright denial and rejection of her daughter’s testimony.

As much as “Little Tickles” is a film about victimhood, it is also a film about recovery and resilience. Each revisiting of Odette’s trauma is painful and hard to watch; yet by fleshing out her past, even imbuing it with some humorous anecdotes (a subplot with a flamboyant dancer called Benjamin is particularly memorable), Odette reclaims some fundamental autonomy, no longer a passive observer in her own narrative. “I will not be a living dead person,” she says defiantly, in the face of her mother’s denial. While Odette’s life is marked by undeniable suffering, it is hers to shape and control. Simply by the act of telling her therapist about her childhood, she becomes the author of her own story.