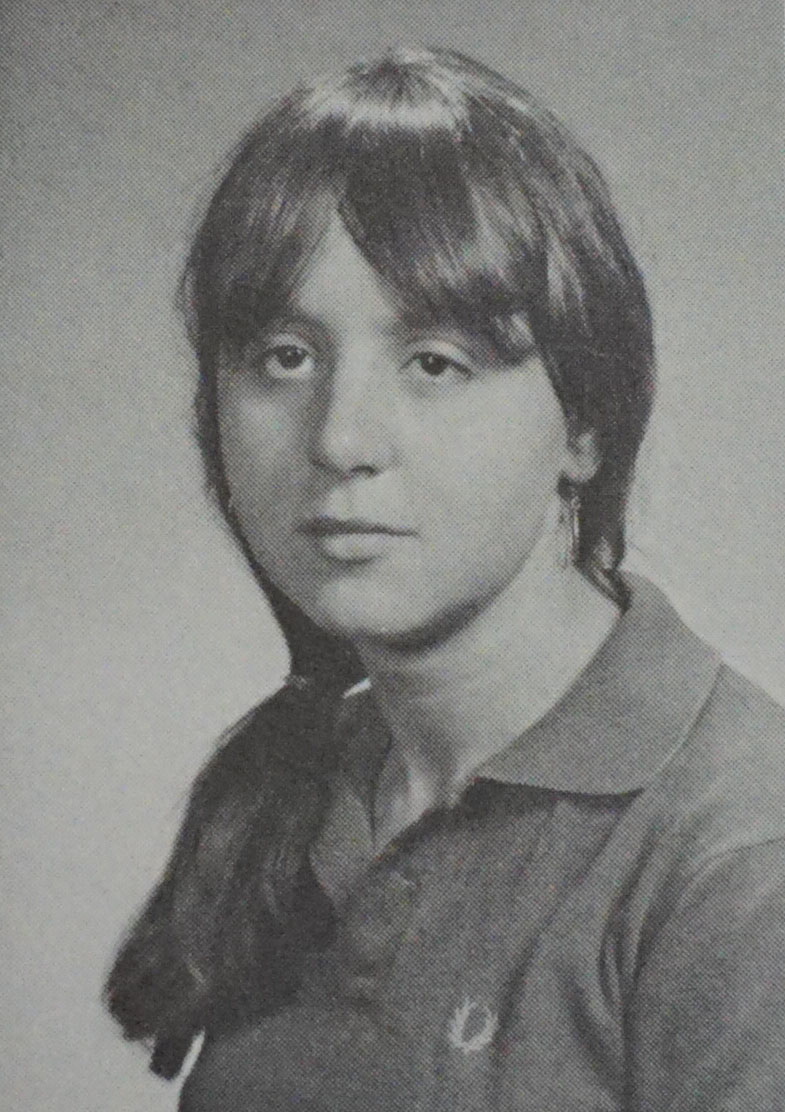 Christina Schlesinger ’68 comes from a family of artists.

“We’re all artists,” she says. “It’s just on my mother’s side, there was such a gene.” She recalls that her parents told her, “Go to Harvard and get an education. You can always be an artist.”

Schlesinger’s lineage is one that is deeply entangled with Harvard. Both her mother and grandmother attended Radcliffe College, her father and both grandfathers taught at the University, and the research library dedicated to women’s history was renamed after her paternal grandparents, Arthur M. Schlesinger and Elizabeth Bancroft Schlesinger, in 1965.

Given her family’s legacy, it was hardly a surprise when she was accepted to Radcliffe in 1963.

“I got my acceptance the day that Kennedy was assassinated, so kind of like nobody cared, and I didn't care,” Schlesinger recalls. “I just ended up going to Radcliffe because everybody in my family went to Harvard and Radcliffe, it wasn't like I thought about it. I was expected to—it was part of the program in a way.”

But even if Schlesinger seemed to belong at Radcliffe, she says her undergraduate experience was marked by pain and insecurity. Her parents divorced and she struggled to understand her sexuality. These challenges would ultimately propel her to an impressive art career, in communities far away from Harvard and back.

“I spent my four years at Radcliffe trying to come to terms with my sexuality, which I didn’t even understand until a couple years out,” she recalls.

Schlesinger said that, when she was at Radcliffe, Harvard’s visual arts program was in flux. Dissatisfied with the academic offerings in the arts, Schlesinger pursued her passion for painting outside of the classrooms, on her own.

She said she also felt dissatisfied and alienated by the rigid gender dynamics that governed the campus.

“We had to wear skirts to class. There was no place for us to eat lunch. When we were there, we had crummy little rooms,” she says. “It was only when boys started living on the Radcliffe quad that we had jitneys back and forth. We just walked in the cold. We had parietals. We were treated definitely like second-class citizens.”

Schlesinger majored in English, completing a collection of paintings for her thesis advised by Neil L. Rudenstine, who would later become president of Harvard; participated in anti-war activism on campus; and dated some boys. Though she has maintained many relationships from her college days, Schlesinger’s said her most formative experiences have happened largely after Radcliffe.

After graduating from Radcliffe and breaking up with her college boyfriend, Schlesinger moved to Los Angeles and lived in a tent in her friend’s backyard.

“When I went out to California, I never told anybody,” she recalls. “I went to Harvard, but I also never told anybody my last name because at that point my father was kind of famous, because he was a candidate Kennedy connection, and I was so determined to become my own person and not be a messenger.”

Though she kept one aspect of her identity hidden, Schlesinger became comfortable with another part: In California, she came out as a lesbian. 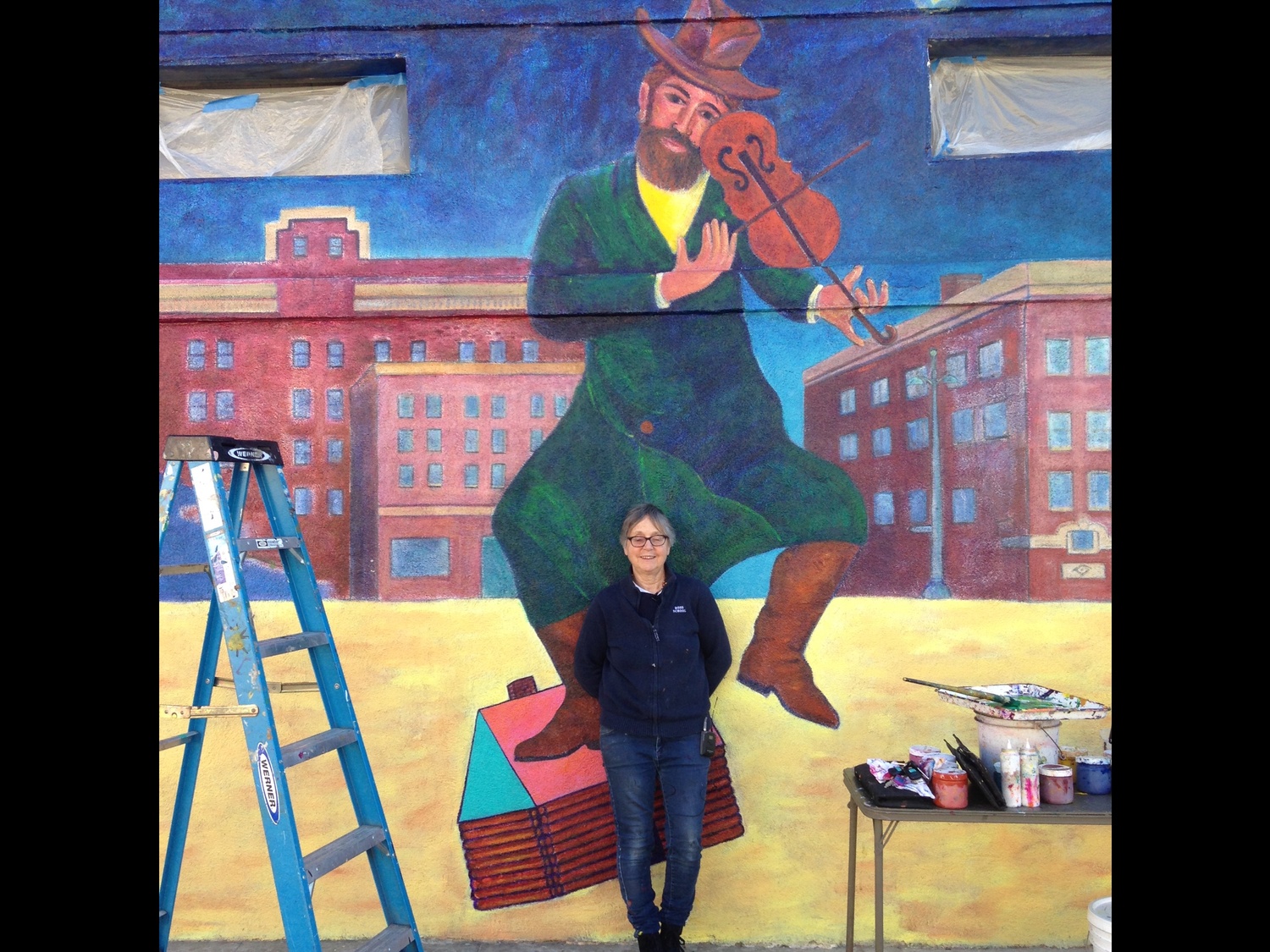 By Courtesy of Carlos Rogel

The move to California was meaningful on an artistic level as well as a personal one. At a bar, Schlesinger met Judy Baca, the woman who would become her collaborator. She says she was surprised by the immediate connection with Baca, since they came from such disparate backgrounds.

“Imagine I'm coming from Harvard, from Cambridge, from this very privileged family. Judy Baca was coming from like, poverty, you know,” Schlesinger says. “It was like we needed—it was just like we met each other and we filled in each other's worlds.”

Together, the two women founded the Social and Public Art Resource Center in 1976. SPARC, an organization that is still active today, strives to unite Los Angeles communities—particularly low-income youth—through public art, like murals.

Starting in 1974, Schlesinger and Baca mobilized hundreds of young people from a diversity of backgrounds to create SPARC’s most famous piece: the Great Wall of Los Angeles, a half-mile-long mural that depicts histories of different ethnic groups in California.

A Teacher and a Guerilla Girl

After teaching and supporting SPARC youth, Schlesinger formally transitioned to the role of middle school and high school teacher in her 40s and 50s.

“I became, along with an artist, I became a teacher,” Schlesinger says. “I think I realized the whole trick about teaching is that you just have to engage your students. It's all about, you know, you can know everything but if nobody's listening to you. It doesn't make any difference, you know what I mean?”

But at least some of her students did listen.

A former student recently tagged Schlesinger in an Instagram post, describing her as a “an original bosslady” and a “fearless femme.” The student says Schlesinger was an important mentor to her younger self, as someone who experienced similar personal struggles.

“There are rare people in your life who make an immense indelible impact. Chrissie made a profound impression on me as a restless, defiant smart-mouth, 13-year-old girl dealing with her parents' divorce, figuring out who she was, and combating a body and mind filled with hormones,” the post reads.

Schlesinger had taught this student in the eighth grade. She is now 32 years old, and a “very successful fashion person in New York,” according to Schlesinger.

SPARC was not the last art community that Schlesinger would join and impact. At the end of the ’80s, Schlesinger joined the Guerrilla Girls, a collective of feminist activist artists based in New York City. The Guerrilla Girls are best known for wearing gorilla masks, identifying themselves with pseudonyms of deceased female artists, and exposing gender inequities in artistic institutions.

As a Guerrilla Girl, Schlesinger took the name “Romaine Brooks,” after a lesbian painter whose work—“portraits of women who were so clearly lesbian”—inspired her during the early years of her artistic career. She was in charge of creating posters.

“In the middle of the night we'd go out with wheat paste and the posters and put them all over Soho,” she remembers.

“The cops used to come and chase us,” says Robin Tewes, who was a founding member of the group. “We'd have to drop the buckets and run. It was like three in the morning.”

“And then in the morning you’d wake up and there'd be all these cool posters, you know, attacking the art world, you know, saying and naming names, giving grades,” Schlesinger says. “We did a report card on galleries, you know, giving them these effort for failing, for not showing women artists.”

During the 50th reunion of the Class of 1968, Schlesinger will bring a different group of women together for a different kind of art project. The Leverett House Library Theater will transform into “Underground 68,” an artistic gathering place for alumni. Schlesinger will lead her classmates in creating a “Radcliffe Community Mural.”

“I put out this call for anybody in the class who wanted to be involved in this mural project and I'm thinking maybe I'd get two or three responses,” Schlesinger says. “I've got over a hundred responses. People are into it. They're so into the sense of a regular community, because we were the last class to graduate in Radcliffe Yard.”