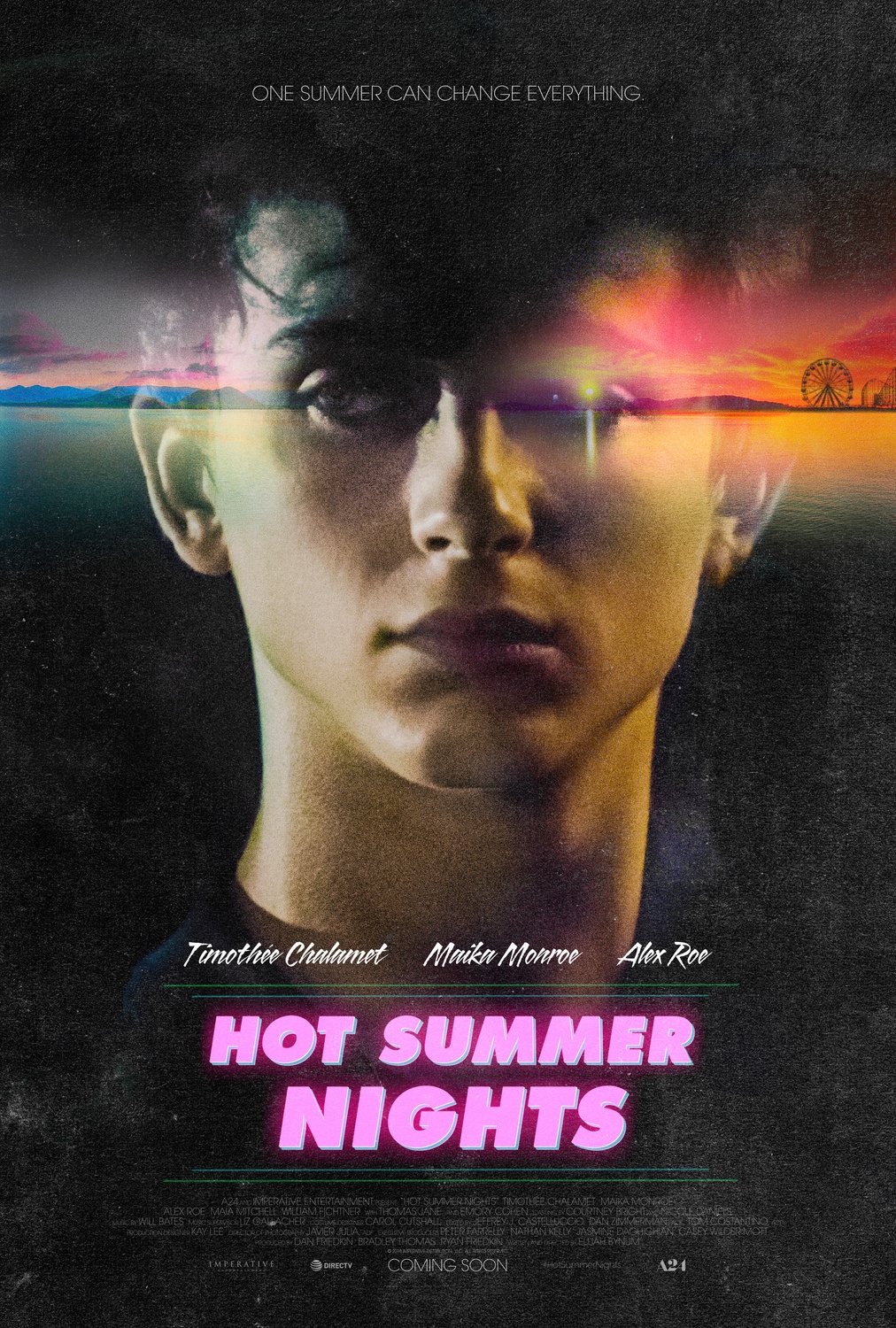 Timothée Chalamet stars in "Hot Summer Nights," directed by Elijah Bynum. By Courtesy of A24
By Caroline A. Tsai, Crimson Staff Writer

It’s said that there are two plots in all of fiction: Either someone goes on a journey or a stranger comes to town. In “Hot Summer Nights,” Elijah Bynum’s directorial debut, gawky, surly Daniel Middleton (Timothée Chalamet) is both journeyer and stranger. During the sweltering summer of 1991, before his senior year, Daniel’s acts of rebellion after his father’s death earn him a summer of exile to his aunt’s house in Cape Cod, a punishment that even he admits is cliché. There, he befriends Hunter Strawberry (Alex Roe), a townie who makes pocket change by dealing weed to tourists, and becomes infatuated with the enigmatic McKayla (Maika Monroe), a local girl-next-door who is as elusive as she is beautiful. As temperatures climb, a fact often reiterated by spliced-in news reports and radio announcements, so does Daniel’s restlessness. He demands that he and Hunter take the weed-dealing business to the next level, procuring larger and larger quantities to sell. But as the summer wears on and the heat wave reaches a breaking point—culminating in a heavily symbolic summer storm—the teenagers in Cape Cod will have to reckon with what they’ve done, and decide who should be held accountable.

In his directorial debut, Elijah Bynum deftly establishes a riveting tableau of small-town Northeastern Americana—there are “townies” and “summer birds,” the haves and the have-nots clearly demarcated by socioeconomic checkpoints: who’s driving what car, who’s living in what neighborhood, and most saliently, who’s smoking the expensive stuff. It’s also a vivid portrait of American adolescence at a particular time in history, a time when football stars held court over scrawny geeks before popularity was meted out by Instagram followers. “Hot Summer Nights” has the makings of a promising drama—but by its third act, lackluster performances by its young stars (save Timothée Chalamet, who artfully straddles nerd anxiety and reckless ambition) and a formulaic plot resolution sabotage its effort to be anything more than another teen soap opera, obviously imagined by an adult who wants to sit with the cool kids.

“Hot Summer Nights” is, at times puzzlingly and sporadically, narrated by an anonymous 13-year-old who claims that all of this was based on a true story. There’s something mythic about the local folklore, with rumors of drug dealing and a character named “Hunter Strawberry.” Bynum, who grew up in Massachusetts, tells the story like an insider to this community: We’re already well-acquainted with the 13-year-old who knows everything about the older kids, from the salacious details of the dream girl’s entire romantic history to the local teenage drug dealer’s rep for rebellion (“I heard he drove a motorcycle,” says one character conspiratorially, while another ventures a darker guess: “I heard he killed a man”). Less familiar to us are the dream girl and the drug dealer themselves, and Monroe’s and Roe’s opaque, impassive performances—like cringeworthy audition tapes come to life—don’t humanize their characters, which are already flimsy sketches of 3D people. It doesn’t help that Bynum’s screenplay features the maudlin dialogue of a Lifetime movie: A cop pulls Daniel over “mysteriously” to deliver the cryptic fortune cookie slogan, the film in microcosm: “Happens every summer. The stars feel like they’re burning out above you. When the air’s so heavy you can’t breathe, nights turn long and sleepless, and you long for cooler times. You know what it is? It’s gonna tear you apart.” The sentiment, though evocative and literary, feels out of place. Even Daniel looks confused: Is this monologue a preface to a speeding ticket or just a spontaneous roadside poetry reading?

Lucky for Bynum, there’s at least one actor in “Hot Summer Nights” who can deliver those lines with conviction, and he’s the film’s leading man, fresh off a 2017 Oscar nomination for “Call Me By Your Name.” Timothée Chalamet saves the second half of the film from entirely becoming tropey mush. As Daniel, Chalamet is endearing, even when he’s not supposed to be—he fidgets under anyone’s gaze, punches above his weight, and even messes up a dad joke on its first telling (so unfunny it’s a little bit funny). Upon rescuing McKayla from a date at a drive-in theater, he struggles to play it cool: “He looked like a real asshole,” he says of her date.

“He was eating Raisinets,” Daniel replies. “Food of assholes.”

For a film that tries to toe the boundaries of its genre, though, “Hot Summer Nights” features a protagonist who’s likable in a surprisingly formulaic way. Daniel is a scrappy, well-meaning, American boy borne out of the entrepreneurial spirit: a Horatio Alger character of his generation. What sets Daniel apart from the rest of the townies and summer birds, what makes his arrival in Cape Cod so momentous, is his insatiable craving for more. When he’s told the clients won’t buy higher quantities of weed, his reaction isn’t resignation, but dogged persistence. “How can we make them want to?” he asks.

With textbook-archetypal characters and an easily foreseeable plot, “Hot Summer Nights” tends, like its protagonist, to crumble under its own ambition, devolving from originality into the territory of convention and formula. Though perhaps Bynum’s adherence to narrative tradition is somewhat gratifying, and even somewhat fitting. Thematically, even narratively, comparisons to “The Great Gatsby” wouldn’t be misplaced: While the film feels like a portrait of 1992, it’s actually nostalgic for a much older America. Characters park their cars at drive-in movies on Kennedy turf, and old-school class distinctions are stringently observed. Like Nick and Gatsby, Daniel and Hunter party hard, then crash hard; they struggle to evade the reckoning of the future; they are careless and impulsive, experiencing every emotion in its most visceral and urgent strain, then waking up the next morning to wonder if it was all a fever dream. It’s a fascinating energy for the film to command, but one that peters out, as unsustained as a passing heat wave.