'Ocean's 8' Steals the Jewels—But Not the Show 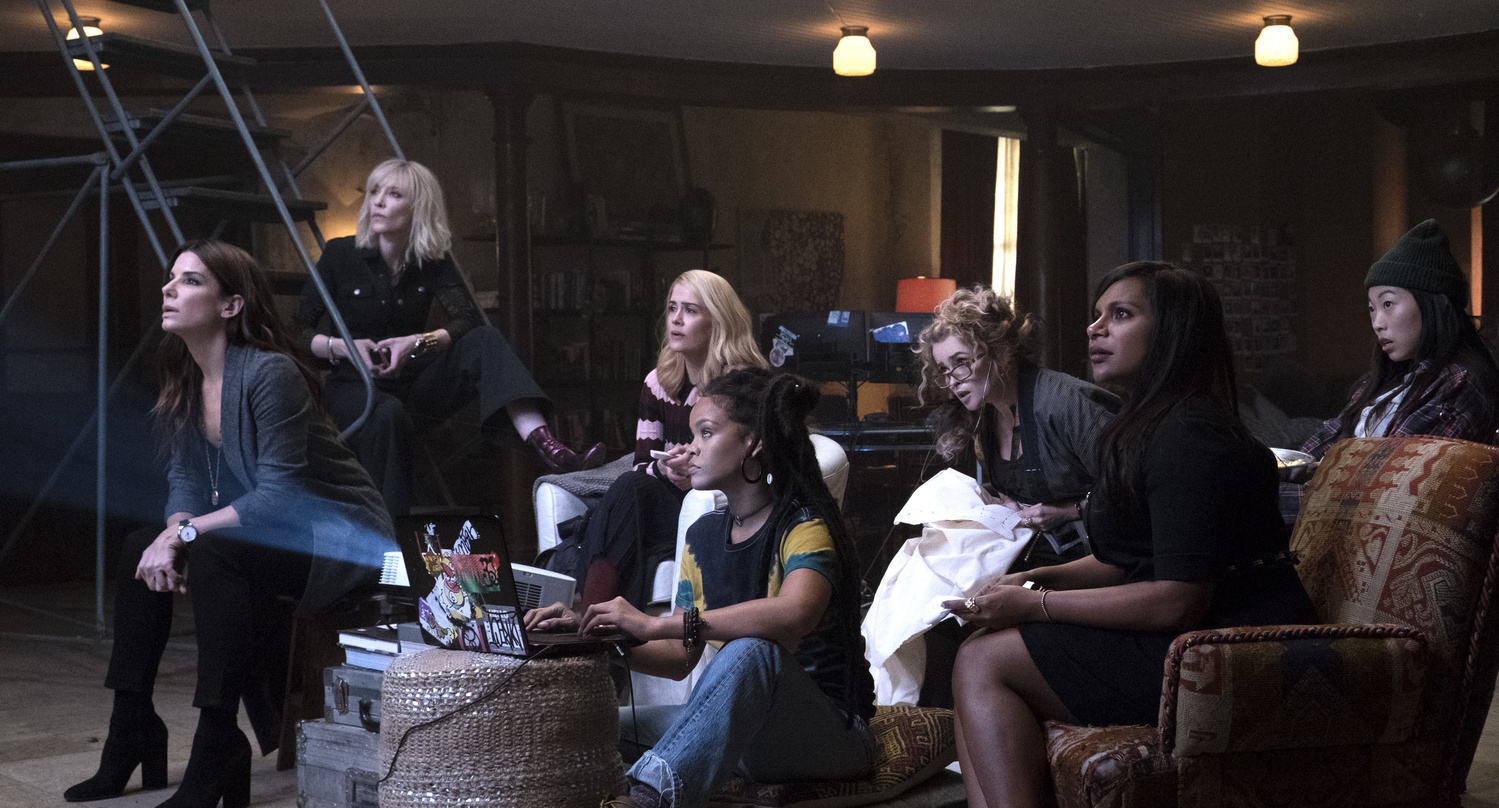 “Do women have to be naked to get into the Met?” asks the most iconic of 30 posters by the Guerilla Girls. In 1989, the anonymous feminist collective surveyed the ratio of female to male nudes showcased in New York’s Metropolitan Museum of Art and compared it to the ratio of female to male artists whose art hung on the walls of the Met galleries. The results? “Less than five percent of the artists in the Modern Art Sections are women, but 85 percent of the nudes are female,” the poster reports—data that has admittedly shifted, but only incrementally, over the past few decades.

The women who prowl the halls of the Met in Gary Ross’s “Ocean’s 8” are less preoccupied with the artwork on the walls, and more with the Hollywood royalty on display at the annual Met Gala, an event one character aptly terms “the most exclusive party in the world.” Their ambitions are decidedly more artful than artistic, though a similar reclamation of power is at work here, too. After Debby Ocean (Sandra Bullock), sister of George Clooney’s Danny Ocean of the original Ocean’s franchise, talks her way out of jail, her first move is to slip effortlessly back into her material life, first by swindling cosmetics from a Bergdorf saleswoman, then by hustling a luxury suite at a New York hotel, the first of many steps to her elaborate plan to pull a complicated jewelry heist during the Met Gala. Debby’s star-studded squad includes her wisecracking former partner in crime, Lou Miller (Cate Blanchett, in an array of various leopard-print and glittery costumes), along with five other heist specialists (including, but not limited to, Mindy Kaling as Amita, an expert jeweler, Sarah Paulson as a stay-at-home mommy whose restlessness leads to truck hijacking, and Rihanna as a professional hacker). Together, Debby’s team works to plant Cartier’s $150 million Toussaint diamond necklace on Daphne Kluger (a scowling Anne Hathaway, who’s more Miranda Priestly than Andy), a snotty Hollywood starlet.

Gary Ross’s all-female spin-off of Steven Soderbergh’s 2001 original buzzes with a unique energy of its own. It’s a joy to watch these actresses work, like a feminist buddy comedy dream-casted by Twitter fandom. They all banter cleverly, exchanging one-liners. “Honey, is this a proposal?” Lou quips, to which Debby deadpans, “Baby, I don’t have a diamond yet.” Cast members have been known to gush about the affectionate on-set atmosphere in press junket interviews, a comfort that manifests clearly in their characters’ easy rapport. It makes the heist itself moot—whether or not they succeed is of little consequence when we’re just here for the witty repartee. Or as Amita complains in one scene, “Can’t we just go? Do we have to steal stuff?”

Amita has a point. A sensible director might have cut “Ocean's 8” off 20 minutes early. But Ross drags out the film’s third act until its energy fizzles out, using James Corden as an insurance investigator in a half-baked attempt to reinvigorate a plot sorely lacking in conflict, as if the director suddenly realized that it might be implausible for his characters to simply get away with the crime. Of course it isn’t plausible. Neither is the conceit of the film itself, from the scheme to 3D-scan a necklace and remotely print a zirconium model, to the act of hauling up the necklace from the Cartier vault to begin with. Ross ought to know that the most compelling caper isn’t whether Debby and Co. get found out, or even how they pull it off, but why they choose to do it—and what it means for the impenetrably deified upper social strata.

Following recent fascination for individuals on the margin who can talk their way into elite circles on the seat of their pants, “Ocean’s 8” is a film of its time—one whose currency is beauty, wealth, and above all, status. A Met Gala camera shot lingers purposefully on the Kardashians, America’s de-facto royal family, whose fame is the go-to symbol of ersatz class and rich-quick wealth generated seemingly out of thin air. Who’s in and who’s out has never been more glaringly apparent, and “Ocean’s 8” does best when it speculates how much of “being in” is performative: how easy it is to infiltrate the Met Gala unnoticed or to talk Cartier out of its crown jewels, all the while undermining the cartoonishly ostentatious institutions themselves. (It should be noted that it takes a little more than sleight of hand for A-listers to believably pose as outsiders. Bullock, Blanchett, and Bonham Carter—it’d be a shocker if those household names weren’t already on the invite list.)

It’s a shame that any all-female cast film has to be a capital-S Statement—on female-driven narratives, on women being funny or serious enough, on whether they can make it big at the box office (which “Ocean's 8” has done superbly, but this is besides the point). Films can suffocate under the weight of insurmountable expectations (the 2016 “Ghostbusters” reboot, widely considered a box office bomb, comes to mind), and frustratingly, each victory or failure is heavily symbolic. A victory is an outlier, a failure is evidence that women can’t head mainstream films without being relegated to another genre like “chick flick.” Surely it was never a talking point whether 1984’s “Ghostbusters” or 2001’s “Ocean’s Eleven” would be enough to sustain the future of male-driven movies.

When it comes to “Ocean’s 8,” it’s a promising gesture toward more of its kind, but as a film in itself, it struggles to ascend beyond blockbuster fodder that’s only semi-witty. It’s a 3D-printed zirconium model of what it could have been: Exciting, but just not the real thing. Although perhaps the most telling part of “Ocean’s 8” is not the heist, but its metaphorical subtext. Women want a seat at the table, even if it means breaking in uninvited.