‘The Handmaid’s Tale’: ‘Postpartum’ Not So Different from Prepartum 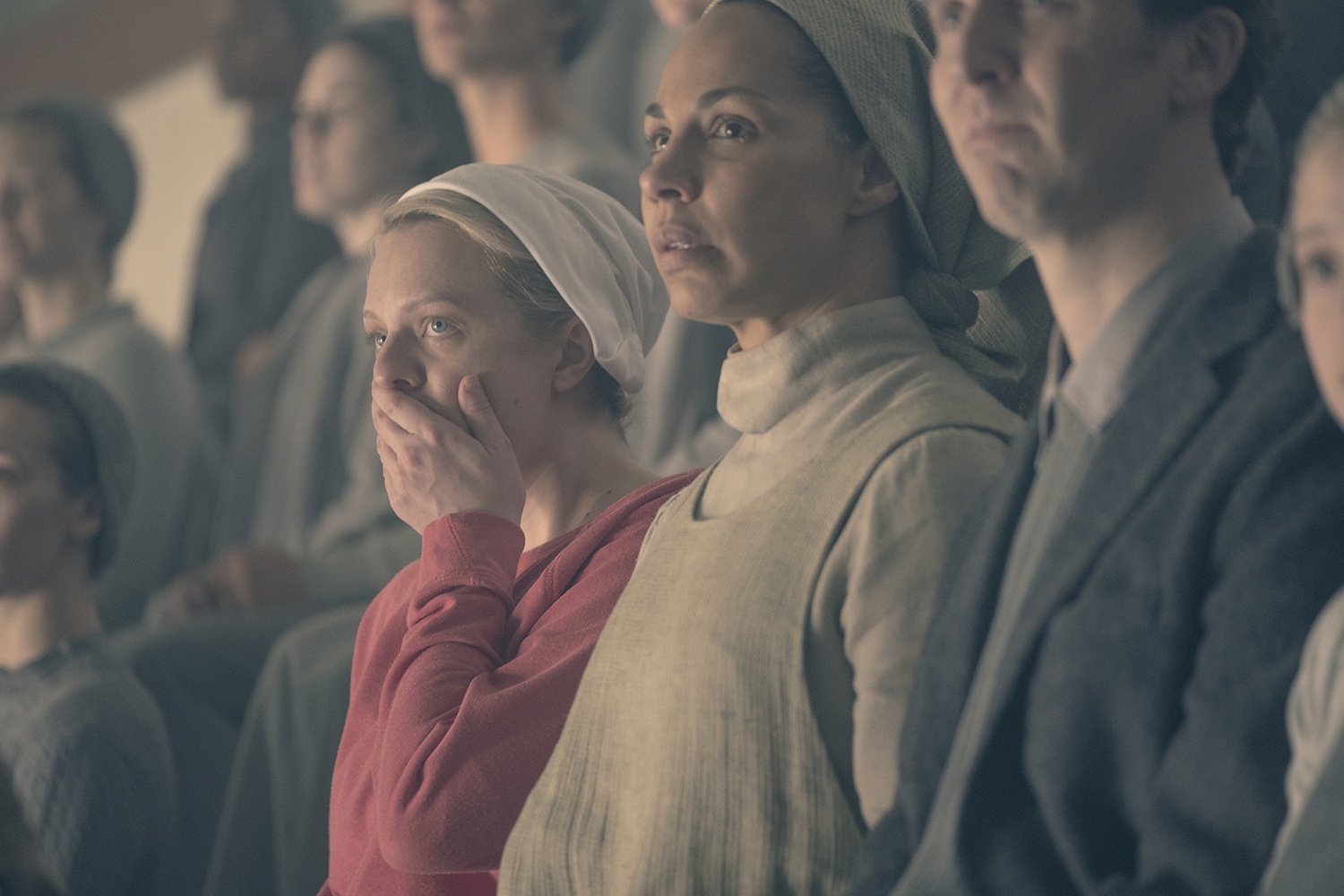 All roads lead to the Waterford household. At least, they do for June (Elisabeth Moss), who unbelievably ends up back there for a third time. Due to her separation from her child, June is unable to produce enough breast milk, appeals to Fred (Joseph Fiennes), and is brought back to her prison cell of a room in his home. Once there, she’s forced to pump her newly lactating breasts while knowing her daughter from afar: hearing Holly’s cries through the floorboards, smelling her worn clothes when no one’s watching.

While she is brought back to her old home, Emily (Alexis Bledel) is brought to a new one, having already been rejected by four couples. The only couple willing to take her in is a strange one, though you wouldn’t know that from Commander Joseph Lawrence’s (Bradley Whitford) reputation as the brilliant “architect behind Gilead’s economy.” If he looks familiar, that’s because he’s Rose’s dad in “Get Out,” and apparently, he’s traded one psychologically thrilling role for another.

In this unfortunate change of setting, the writers give us a glimpse at Gilead in a larger sense. Eleanor, the Commander’s wife, reveals a dark secret in her craze: Commander Lawrence created the Colonies, the toxic wasteland Emily herself was sent to to plough through soil while waiting to die. It’s an interesting piece of information for sure, one that prompts the question: What can and will Emily do with this new discovery? Maybe it will be the push she needs to stop being so cynical and hopeless. But even the small freedoms she is allowed are under Commander Lawrence’s watchful gaze. In the living room, he pours her a glass a wine, of which Emily has a sip to get through the brutal interrogation scene that reveals that Lawrence knows everything about her, from her pre-Gilead life to her genital mutilation. The shot of Emily taking her first, small sip centers her in the middle of the room, surrounded by its darkness. The ensuing silence and the look Commander Lawrence gives her says it all: She may have new information, but he will always have all the power.

Meanwhile, while the two handmaids find themselves in old and new homes, Eden (Sydney Sweeney) runs away from hers with Isaac. Unlike June, however, when they get captured they are sentenced to death by drowning. Eden never breaks character, not even in the final moments before she dies. “Love is patient. Love is kind. It does not envy. It does not boast. It is does not dishonor others. It is not self-seeking,” she says as her last words. June, like us, rolls her eyes through her tears, and you have to wonder—what was the point? Both she and Isaac died a horrible, undeserved death, to be sure. But in a season that never even tried to build a relationship between her character and the audience, the emotions the writers try to wring out of us barely amount to anything at all. Eden might have served to show that you really can find love in a hopeless place, despite terrible consequences (“I think in this place you grab love wherever you can find it,” June whispered to her, no doubt solidifying Eden’s decision to run away), but wasn’t that what June and Nick’s relationship was meant to do? She might have been a plot device to thaw Serena’s heart, the pious pseudo-companion who embodied everything Serena wished June to be: dutiful, compliant, meek. After all, besides Eden’s mother, Serena looked the most devastated during and after her execution. But then, isn’t baby Nicole doing that well enough? Or maybe she’s meant to push Nick (Max Minghella) into some much needed character development. Based on Minghella’s lackluster performance, however, even that is hard to imagine. (Seriously, especially when juxtaposed with the remaining actors’ stellar performances, Minghella’s sticks out like a sore thumb.)

What’s more, as in “The Last Ceremony,” June gets a brief reunion with her daughter and is even allowed to breastfeed her for the first time when Serena allows her to. One could ascribe it to a mother’s desperation—Serena even tried breastfeeding Baby Nicole herself—or a change of heart set in motion by her grief over Eden’s death. But for a woman who held down her heavily pregnant, forced surrogate while her husband raped her in order to induce labor; who taunted said surrogate with the cruelest glimpse at the daughter she hadn’t seen in three years as a warning; who wouldn’t even let her touch the child she had just given birth to, it doesn’t fit in with the image the writers have painted of Serena. In a season full of inconsistencies, the bar is not set high for where the finale may take us.