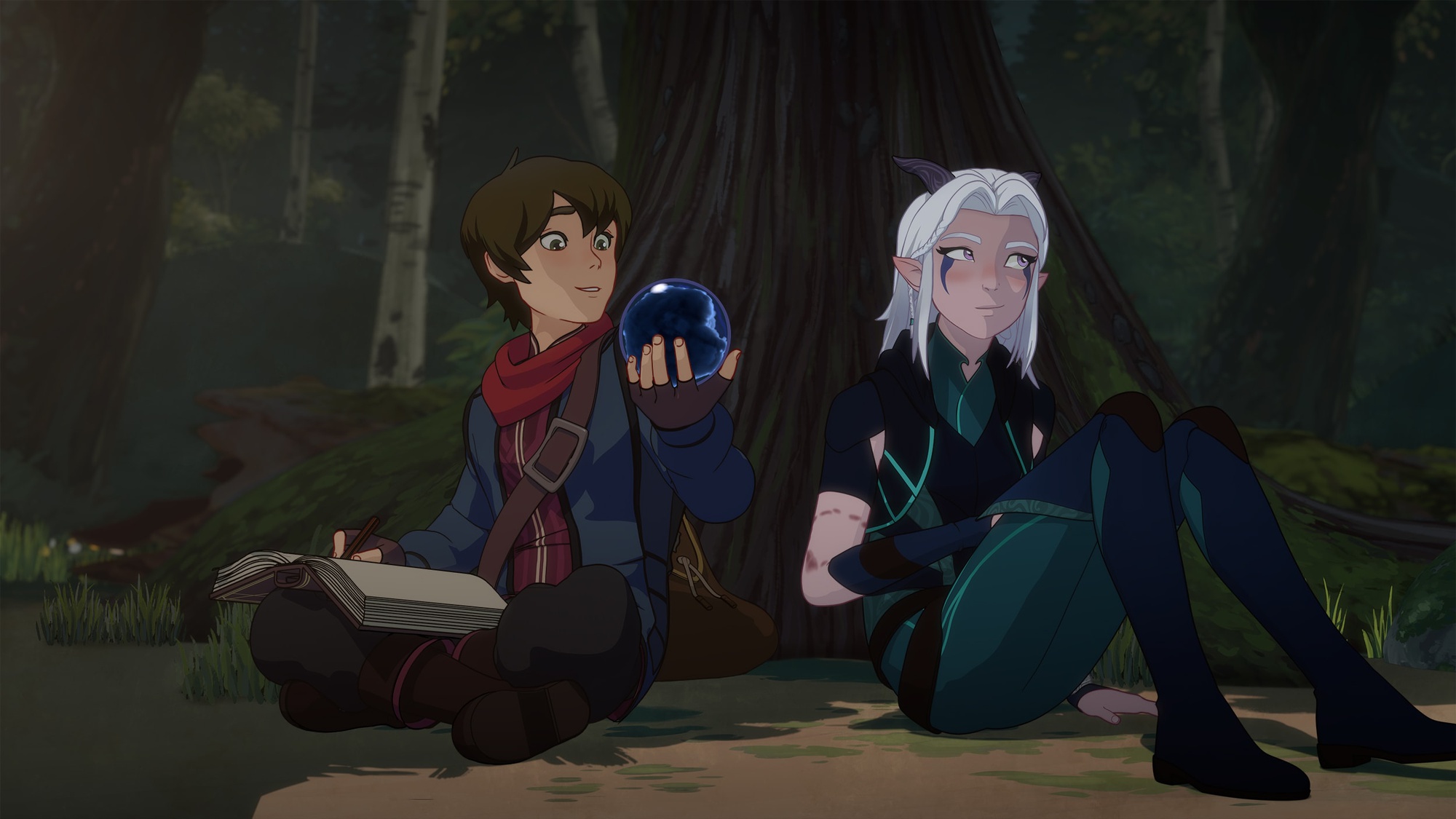 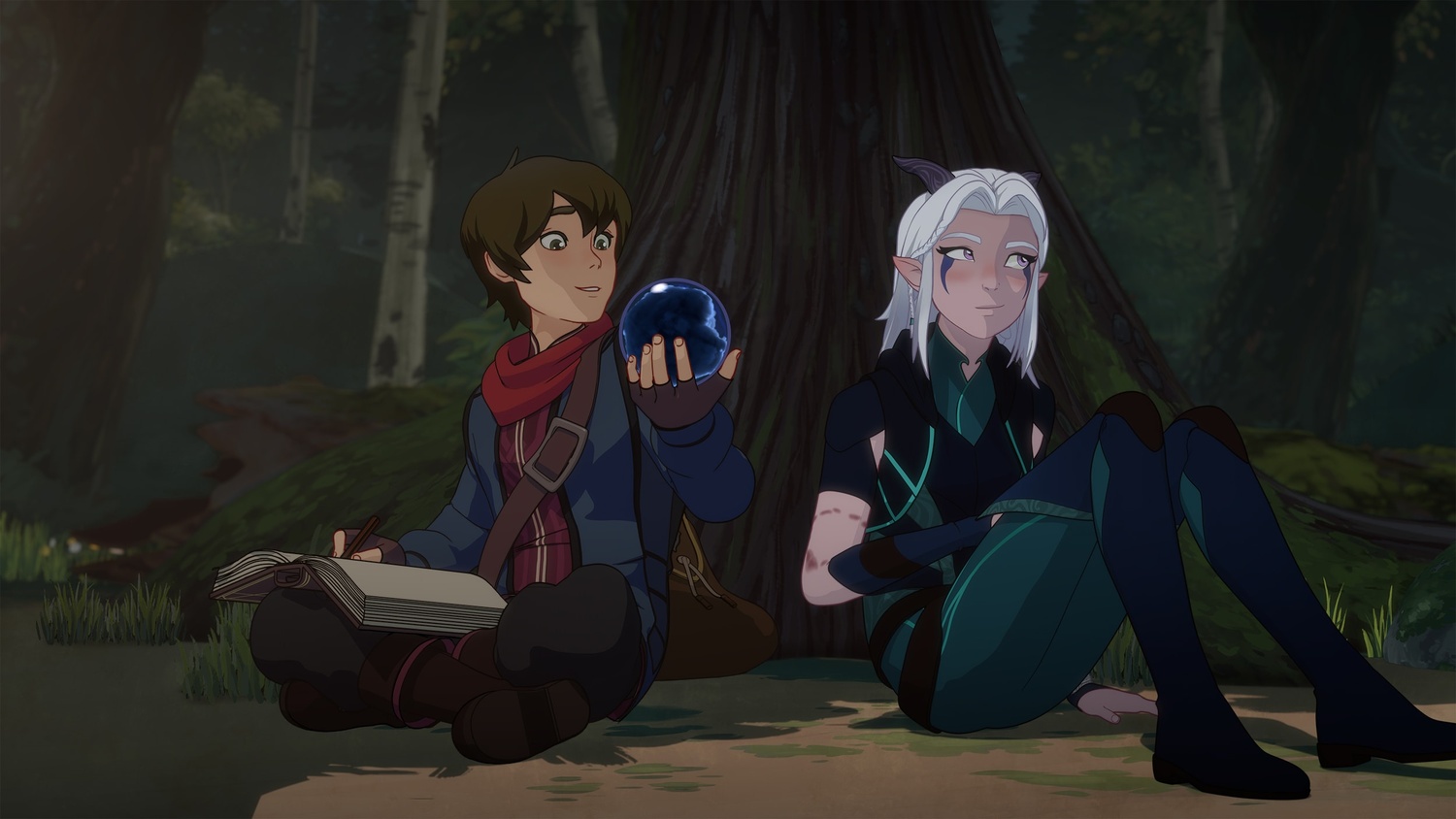 Prince Callum (Jack De Sena) and Rayla (Paula Burrows) form an unlikely alliance in "The Dragon Prince" on Netflix. By Courtesy of Netflix

Before it was even released, “The Dragon Prince” had a nearly unbearable burden of promise. One of the creators of this new Netflix show is Aaron Ehasz, whose television pedigree is tough to beat. He had a hand in “Futurama,” but more impressively helped produce, write, and direct the classic, beloved show “Avatar: The Last Airbender.” Both of these animated and family-friendly shows successfully achieve an impressive amount of emotional and philosophical depth and character complexity, a feat that Ehasz and his co-creator, Justin Richmond, have clearly tried to emulate in “The Dragon Prince.”

Certainly, the plot of “The Dragon Prince” will feel familiar to any fans of “Avatar” — a small band of young adults from different backgrounds embark on a quest to restore peace to their magical world. The four elements of the earlier show have been bumped up to six original sources of magic, one of a number of superficial differences between the two shows. “The Dragon Prince” is no mere clone, but it shares much of its DNA with Ehasz’s previous work.

The show takes place in a sword-and-sorcery, European-style fantasy realm. But encouragingly, the more familiar (to American audiences) milieu does not reflect a decrease in the show’s commitment to representation of diversity. “Avatar” had an impressive amount of diversity on several axes —at least in terms of representation on screen, less so in regards to voice actors — and “The Dragon Prince” has continued that trend, perhaps most notably by featuring a deaf woman (who speaks in American Sign Language) as a powerful military commander.

“The Dragon Prince” generally lives up to the high expectations set by its creator’s past work, although it has yet to match the magic of “Avatar.” Perhaps this is because the first season, at a mere nine episodes, covers much less ground than do the 20 episodes of the first season of “Avatar,” making it hard to get invested in the characters as of yet. The core protagonists — princely step-brothers Callum (Jack De Sena) and Ezran (Sasha Rojen), and their elfin companion Rayla (Paula Burrows) — have only just begun their journey by the end of the season. Season One does much more to establish mysteries than resolve them, or even give any hint as to when they will be resolved. As with jokes, it is hard to judge a television show by the set-up alone.

The content of “The Dragon Prince” is always at least decent, and is genuinely good for the most part: Jokes land, characters are developed well, and the plot moves in twists and turns that generally avoid unnecessary clichées. Unfortunately, the biggest problem the show runs into is its animation style. It is 3-D computer-animated, and the show often uses flashy modern animation techniques that mimic camera movements and depth of field. At the same time, however, the animation is clearly trying to recall classic, 2-D animation styles, to the point that frame rate is low enough to be visible.

The decision to artificially lower the frame rate is mind-boggling. Frame rates in animation have been high enough to be smooth for a long time now, and whatever pretensions towards a play for nostalgia the animators may have had, the camera and 3-D tricks they have employed — which are distracting enough on their own — prevent the show from ever feeling like a throwback. What is especially frustrating is how good the art is in “The Dragon Prince” — many individual elements are simply gorgeous — but as soon as they are animated, they become impossible to appreciate. Over time, it will be possible to adjust, but the frame rate is an unreasonably high barrier to entry for a show that has every sign of being at the very least a delightful show, if not, in time, a classic.

Fans of “Avatar” will find a welcome home in Xadia, the land of “The Dragon Prince.” The humanist philosophy and unique blend of idealism with the true complexities of politics and morality will feel as comfortable and familiar as the brave young protagonist who relies more on his heart and his mind than his martial prowess. If Ehasz and Richmond can stick the landing of their intriguing start, then “The Dragon Prince” will be a quality show. At the same time, however, it must contend with the animation issues and the fact that the creators of “Avatar” recently announced they’ll be heading up Netflix’s live-action remake of the show. Given that, “The Dragon Prince” will struggle to find the cult of adoration that still surrounds “Avatar” a decade after the show ended.