Tragedy, Tyranny, and Designer Costumes: A Conversation on ‘The Politician’ with Ben Platt and Julia Schlaepfer 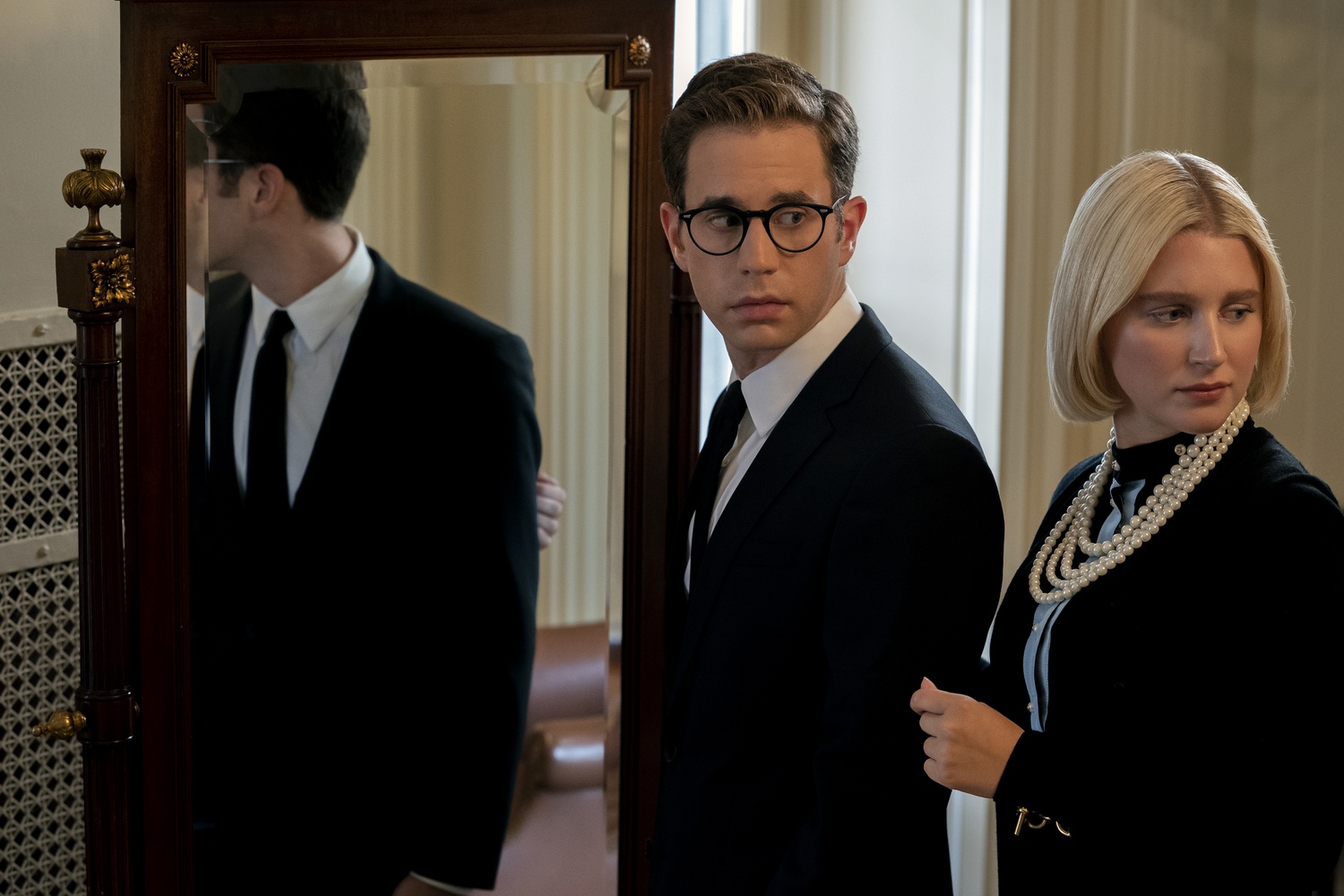 Ben Platt and Julia Schlaepfer star in "The Politician," on Netflix. By Courtesy of Netflix
By Caroline A. Tsai, Crimson Staff Writer

“The Politician” predicted the now-infamous college admissions scandal completely by accident. In a plotline from the first episode, Payton Hobart insists that his admission to Harvard is fair and merited — unlike his brothers'. “The college admissions thing was totally psychic,” Ben Platt, who plays Payton on the show, said.

That foresight is indicative of the way that the show — about high-functioning teenage politicians enmeshed in a tense student body election — speaks to the present moment. “It’s now, in the best possible way, trendy to be politically involved, and to have a voice, and to be heard,” Platt said. “I think that it's really no coincidence that this is the show happening while that’s the movement, and I think if anything, hopefully fans the flames of that a bit.”

Seated at a polished wooden table in the Boston Athenaeum — a storied library not unlike one of the show’s recurring settings — Platt was joined by co-star Julia Schlaepfer, who plays Payton’s First Lady-esque girlfriend Alice Charles, to discuss the new show.

Co-created by Ian Brennan, Brad Falchuk, and Ryan Murphy, “The Politician” follows the political ambitions of a young presidential (and Harvard) hopeful, whose path to power is paved with tragedy, backstabbing, and preppy designer costumes.

“Racks of designer clothes,” Schlaepfer said. “Sometimes you just go in for an hour to go and play dress-up all day.”

The show also represents the first product of Murphy’s $300 million deal with Netflix, the biggest producer contract in television history, according to the Hollywood Reporter. While the gravitas did not escape the actors on set — “It’s Ryan’s first Netflix show, and the optics have been, I’ve felt, a little bit scary,” Platt admitted — the acclaimed producers’ easygoing professionalism put the performers at ease.

“The wonderful thing about Brad, Ian, and Ryan is that they just are our biggest fans,” Schlaepfer said. “I remember Ryan was so worried that we didn’t like the show, and he wanted to make sure we all liked it. They don’t put any pressure on us at all.”

Platt agreed. “In the making of it, you feel very protected because Brad, Ian, and Ryan know exactly what they’re doing, and they’re delivering on all levels as far as the design, and the people that are shooting it, and the cinematography, and the writing,” he said. “So you feel like, ‘This is something fantastic. And I have no choice but to rise to the occasion and bring my best work.’”

An added reason to bring their best work might have been the star-studded ensemble cast, which includes the likes of Gwyneth Paltrow and Jessica Lange. In particular, Platt lauded Paltrow, who plays Payton’s disaffected mother Georgia.

“She’s effervescent and lovely, like a ray of light, and really just was incredibly protective and maternal towards me,” Platt said. “I think she knew — we both did — that this relationship was going to be a really important one for the show.”

Paltrow’s character even satirizes her own real-life wellness guru persona. “She really took an interest in me as a person, even when she’s in between takes making billion dollar-decisions for Goop,” Platt joked.

Meanwhile Lange, whose repertoire mostly comprises drama, was able to flex little-known comedic muscles. “I think you expect her to be a really brilliant dramatic actress, which she is. But I think that a surprise for all of us, particularly for me, was what a brilliant comedian she is,” Platt said.

Even alongside these industry heavyweights, though, both young actors have managed to make names for themselves. For Platt, who originated and won a Tony for the lead role of the Broadway musical “Dear Evan Hansen,” portraying industrious, power-hungry Payton Hobart was a significant departure from quiet, socially anxious Evan Hansen.

Meanwhile, Schlaepfer found herself turning toward real-life political figures for physical inspiration when it came to understanding her character.

“I studied a lot of young Hillary with Bill when all the scandal happened,” Schlaepfer said, “and you know, her drive to stand by him, and to support him, and love him. I was really fascinated by that. And so I watched a lot of interviews of the two of them during that time. And just wanted to study her physical behavior, to try and figure out as much as I could.”

By contrast, Platt turned to fictive reference points in shaping his characterization of Payton.

“Peyton definitely has some Tracy Flick, for sure,” he said, referencing Reese Witherspoon’s “iconic performance” in “Election,” released in 1999. “I love Reese Witherspoon more than life. I also think there’s a bit of John Malkovich in ‘Dangerous Liaisons’ in [Payton] a little bit. I drew on that slightly. And then it’s hard not to draw the Rachel Berry parallels, given the tone and given the drive.”

Though their characters certainly exhibit ruthless ambition, it was crucial for both Platt and Schlaepfer to temper the Machiavellian tendencies with human ones.

“Self-doubt and vulnerability — for me, that was the stuff that felt really satisfying,” Platt said. “This is the way that you can ensure that Peyton is someone you want to follow, or at least want to, are fascinated by, if not rooting for. When those feel like they’re earned enough and big enough, when you’re doing the stuff that’s a bit colder, meaner, [...] you get to go a lot farther because you know you’ve got this moment coming.”

— Staff writer Caroline A. Tsai can be reached at caroline.tsai@thecrimson.com