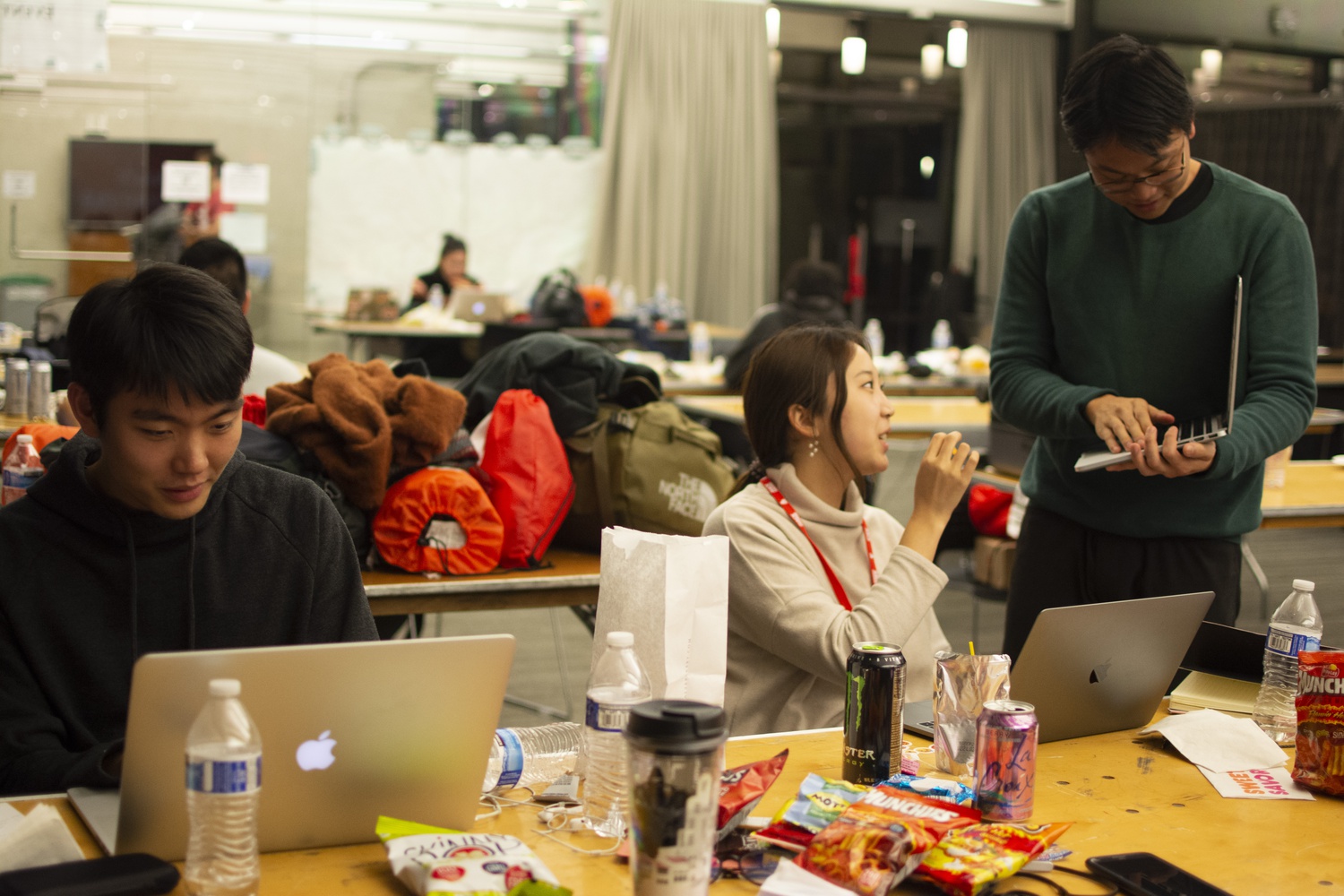 Students from various schools, including RISD and MIT, worked on different projects, including an AI-based app that would send users self-care reminders. By Jocelyn Wang
By Simon J. Levien and Virginia L. Ma

Hundreds of students from universities representing five continents spent 36 sleepless hours coding over the weekend during the fifth annual HackHarvard, a student-run hackathon held at the Student Organizations Center at Hilles.

HackHarvard — a student group for technology enthusiasts — planned the hackathon, an event geared for participants to collaborate on developing new software.

Student organizer Catherine Yeo ’22 said this year’s theme — “connecting the dots” — focused on the intersection between technology and society, which inspired the projects coders created.

“We want to see how students build projects that not only are just great pieces of technology, but they’re also thinking about how to apply this technology to all walks of life,” Yeo said.

“Software is like pancakes,” said Waldo. “You always have to throw the first one out.”

The hackathon welcomed participants from a variety of different experience levels and disciplines, ranging from first-time hackers to seasoned coders.

First-time hacker and Dartmouth student Katherine F. Lasonde said she was attracted by the hackathon’s prestige and breadth of opportunities.

“I’m most excited to learn something new,” Lasonde said. “There’s a lot of cool talks and opportunities to try out avenues of technology I normally wouldn’t be exposed to in a classroom setting or even in a normal weekly club project setting.”

Three separate judges reviewed and scored each project. The projects with the highest average scores made it to final deliberations from which top three finalists were selected. Individual sponsors — like Facebook, Google Cloud, and financial technology startup Envel — also gave out awards based on specific challenges announced at the opening ceremony.

The top award went to Phillinda.Space, an app where users can fill out forms in their native language and translate them back into English. The team was composed of Boston University students Austin M. Negron and Rishab Nayak and Northeastern University students Sebastian Münchow and Daniël Trujillo.

Negron said Phillinda.Space was inspired by his grandmother, who does not speak English as her first language and has difficulty signing forms in English.

“Whether it’s filling out medical papers or applying for jobs or even just understanding tax documents, there’s an issue,” he said. “My grandma is going through this — there has to be millions of other Americans going through this that don’t have a grandson to help.”

Negron said he plans to give the Nintendo Switch, one of the many HackHarvard prizes, to his little brother.

Diane E. Williams, who served as a judge and project mentor, praised the unpredictable and exciting nature of hackathons.

“I’m just astonished by the ideas students have, the problems they want to solve, and what they accomplish in such a short period of time,” she said. “I love the delightful surprise at how students interpret the theme.”

“I don’t compare apples to kumquats,” Williams said. “I’m just amazed by what beginners are able to do.”

A previous version of this article incorrectly stated that HackHarvard hosts weekly "HackNights." In fact, it does not host these weekly events.