At Studio Hotel Boston, Artists Put their Skills to the Test in a Live Art Battle 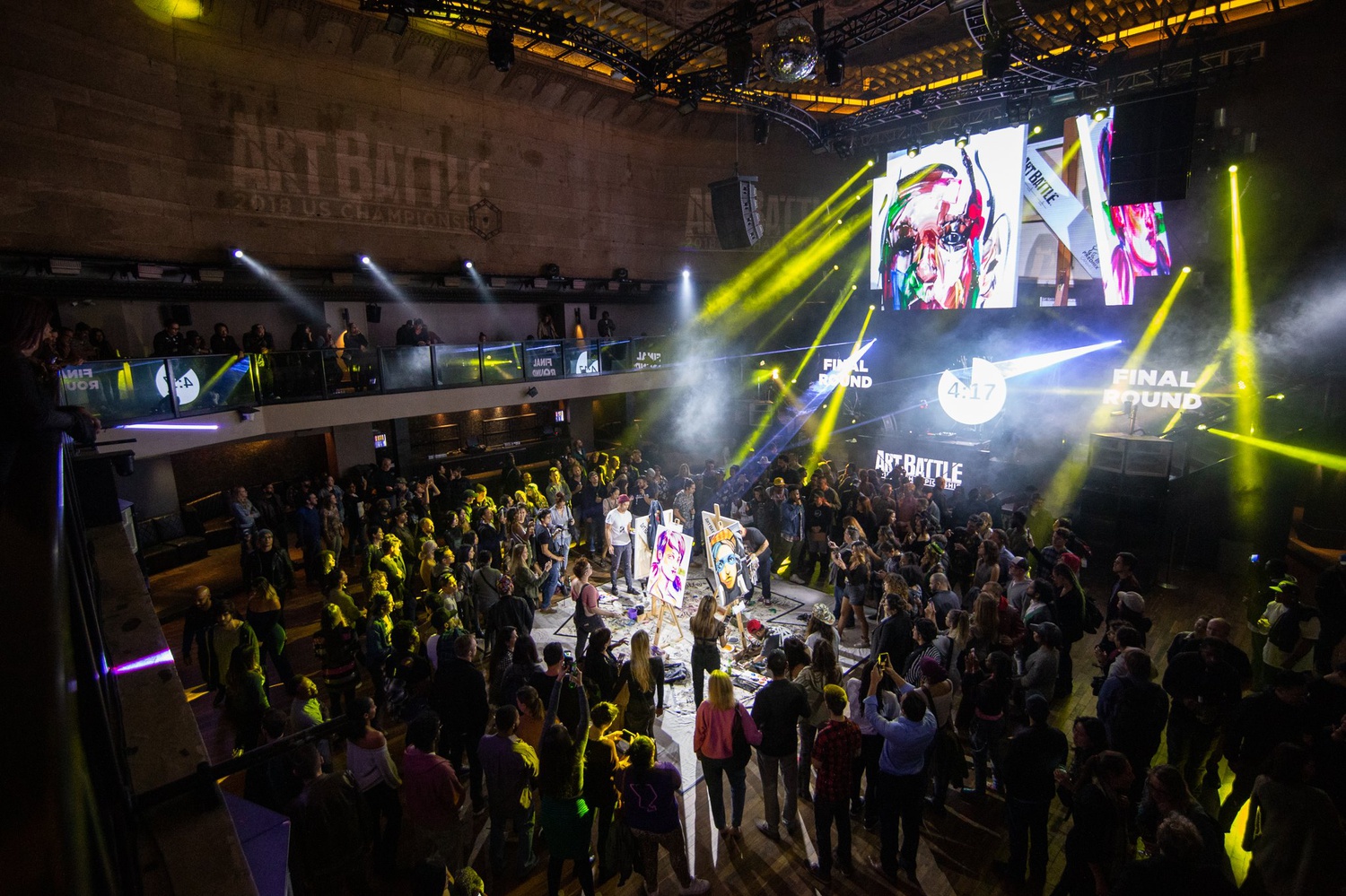 In an Art Battle event, artists face off to create a work of visual art in 20 minutes. By Courtesy of Art Battle
By Kez A. Douglas, Contributing Writer

On Nov. 8, eight Boston area artists faced off in a fast-paced, multi-round live art competition. The special event, hosted in the Studio Hotel Allston and sponsored by Q-Mixers, is part of the Art Battle U.S. National Championship series. The competition featured three rounds of live art in which the eight artists only received 20 minutes to turn a white canvas into an artistic piece. None of the artists were given prompts, so each painting was able to reflect the distinctive styles of the competitors.

The artists were split up into two groups of four, where the first group competed in round one and the second competed in round two. After each of the first two rounds, spectators were able to vote using the Art Battle app for their favorite piece. The two contestants from each round who received the most votes then moved onto the third and final round, where the winner would then be chosen to represent Boston for the next round in Miami. As the rounds commenced, spectators were allowed to move clockwise around the competing artists, giving them a chance to see the creation of the art from beginning to end.

The competitors included Rixy, Curtis, Sagie Vangelina, Massimo, Jameel Radcliffe, Esoteric (Ian Staber), Adam O’ Day, and Pete Cosmos. Radcliffe, O’Day, Rixy, and Curtis made it to the third round. And after the third and final round, O’Day was chosen to represent Boston in Miami.

After each round had concluded, the art pieces were put up for auction. Bids started at $50 dollars and any audience member, using the Art Battle app could make an offer.

Before the battle began, Ananda Toulon, an 18-year-old Boston artist, served as the event’s opener. An immigrant from Dominica, Toulon attends Boston Arts Academy and is an artist who works with Artists for Humanity — a nonprofit organization that provides under-resourced teens paid employment opportunities in art and design.

As the featured artist for Art Battle, Toulon was given 45 minutes to paint a piece of her choice. She described the painting as a self-portrait, and added that much of her art is inspired by human faces.

“I try to inspire myself because that’s where the idea factory is but in terms of life, people’s faces are my main inspiration. They are just so different,” Toulon said. “I try to capture personality and things and souls, instead of it just being a picture, I want it to have a feeling attached.”

Sean Bono, the co-founder of Art Battle, spoke highly of Toulon’s work. He said that one of the missions of Art Battle was to put a spotlight on talented artists — such as Toulon — who are not as prominent in the field.

“I used to believe that the art centers of the world were the places where we needed to make the biggest impact. But [what] I didn’t realize, which I realize today, is that the areas where incredible artists are is where we need to be. Our main goal is really to stay in line with our mission and provide a platform for emerging and professional artists all over the world,” Bono said.

For James Trevino, the Founder of Artpie Studio and the host of the next Boston Art Battle on Dec. 2, Art Battle is wholly unique experience.

“It’s cool because you are bringing art to the masses in a way but [artists are] are also getting immediate feedback, which kind of helps them in the process,” Trevino said. “Even though these are not hourly paintings, it gives [the artists] a clue of what the public really likes.”