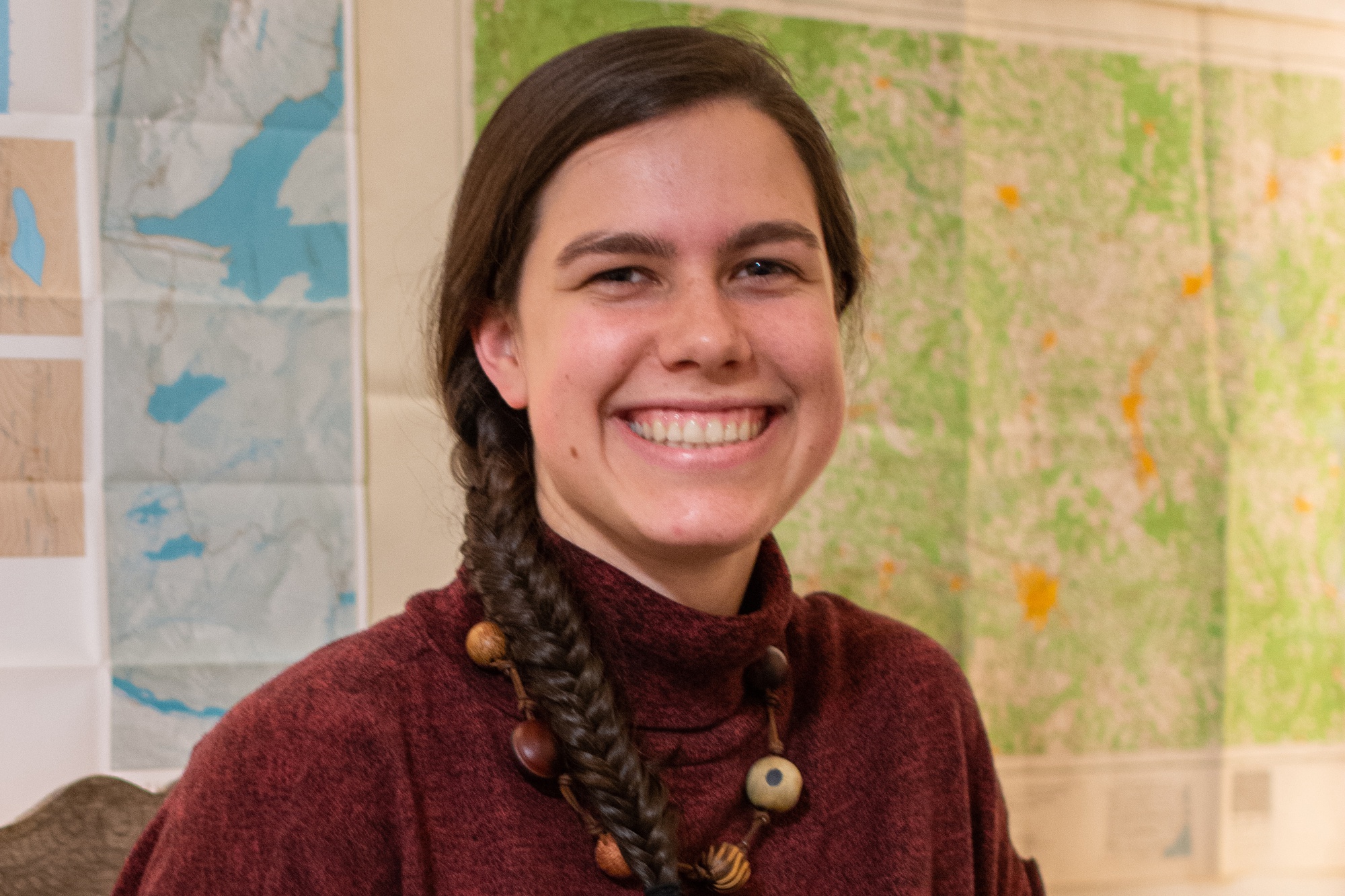 At the threshold of Molly K. Leavens’ ’19-’20 room on the third floor of the Dudley Co-op, a sign greets me: “NO STUPID (non-environmentalist) PEOPLE BEYOND THIS POINT.” The parenthetical, written in her own curly handwriting, stands out from the otherwise bold typeface.

Leavens swears her room is “normally immaculate,” but today, piles of clothing and shoes cover her furniture and carpet, and she has pulled all the drawers out of her dresser for display. Leavens hasn’t purchased new clothing in four years in order to reduce waste, and she is now giving her accumulated belongings away.

“I took out everything I owned and told my friends to come and adopt belongings in exchange for a small donation to the national Environmental Defense Fund,” she explains. She catalogued the items that her friends took and asked each of them to send her a photo and accompanying story of each belonging in use.

The playful warning on her door and her conditional generosity reflect Leavens’ self-described “guiding moral principle of radical environmentalism” — a love of nature that pervades everything from her hikes through the fjords of Norway to a thesis on the global chocolate industry.

Though environmentalism is now “the core part of her identity,” it wasn’t always so pronounced. Born in Chicago, she began skiing at the age of 21 months — the first winter she could walk — and soon became one of the nation’s top racers. In sixth grade, she moved to Utah to train full-time, and in her junior year of high school, she missed 100 school days to ski. She came to Harvard as an elite varsity athlete.

While skiing during her gap year, however, Leavens injured her back, and after a freshman year of constant rehabilitation, she realized she had to quit the team.

“I was lucky that I was somewhere like Harvard and that I could funnel all that energy and enthusiasm into something else really quickly,” she says. “For me, that was largely environmental work.” She’s completing a special concentration on food and the environment and advocates for sweeping changes — from the world becoming 95 percent vegan to the straightforward idea that “toilet paper should not be white. Like that is just stupid, because it’s bleached,” she says.

Radical environmentalism has brought Leavens around the world. For her thesis, which she describes as “a manifesto on the chocolate industry,” Leavens has traveled to Ghana, Indonesia, Japan, and throughout Latin America — all on Harvard’s dime.

As she explains her work in the cocoa industry, Leavens walks to a shelf and picks up a small jar of dark brown beans from Belize. “This is a cocoa bean,” she says. “If you take off the shell, you get nibs. And if you grind this up into paste, you get chocolate.” She demonstrates, cracking the shell open and popping the nibs into her mouth. “I would try those,” she continues through a mouthful, “and then I had to map the different flavor profiles.” 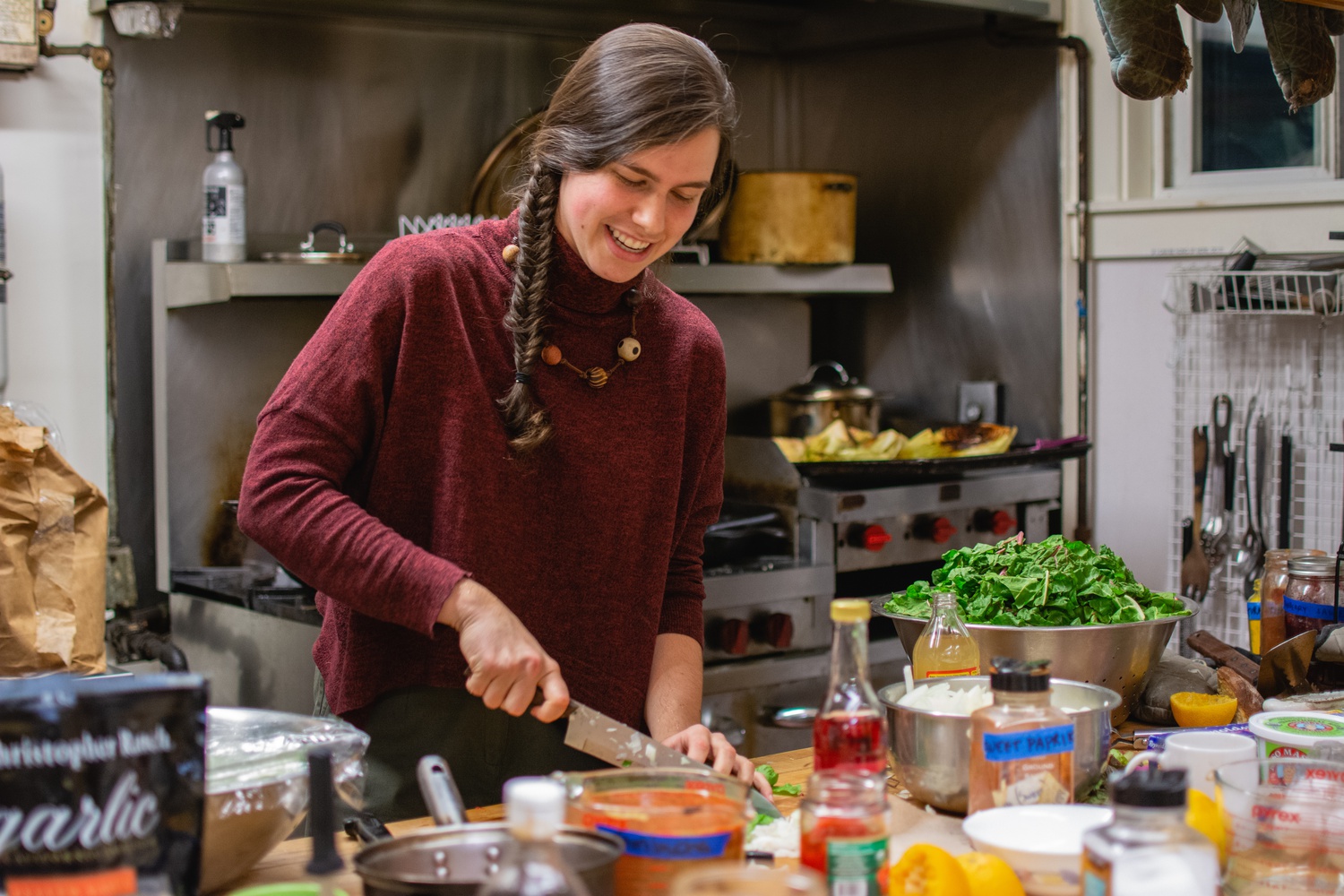 She spent time investigating every part of the chocolate supply chain, from working with a farmer on Sulawesi Island of Indonesia to interviewing sustainability managers at the world’s largest chocolate companies. She quite literally put her life into her work — she recounts that, while traveling through Guatemala during some of the worst flooding the country has ever seen, “a road that I was traveling collapsed and I had to swim across this raging river.” She was featured on the front page of the nation’s most widely circulated newspaper.

Her love of chocolate, food, and the environment pervades her life. Leavens is the Co-op’s “Steward of Cool,” meaning she tracks all of their food to minimize waste. “Like kale stems — every time I cook, I chop them up finely and put them in everything,” she explains, “because no one else will use the kale stems.” She has experimented with nearly every fermented food imaginable: beer, kombucha, chive blossom vinegar, goat cheese, and more.

Leavens’s impassioned environmentalism and personal happiness are in synergy, whether in the kitchen or on intense hikes. “I love being outside,” she says. “Nature is where I’m absolute happiest.” She shares this passion by leading Harvard Outdoor Club trips, but her preferred journeys are even more intensive. She’s hiked along the circumference of Andorra; from coast to coast of Scotland; and through France, Italy, and Switzerland — again, on Harvard funding. After graduating, she’ll embark on a research fellowship in Argentina, where she will fulfill “a lifelong dream of being a cowgirl” and travel to Antarctica to study the environment at the fellowship’s end.

“I’m not a religious person,” Leavens says. “But radical environmentalism is so much like my guiding spirituality.”