Harvard outplayed the Terriers to a 5-2 victory, walking away from the 2019 Beanpot with a third-place finish and keeping its at-large NCAA Tournament hopes alive.
By Spencer R. Morris 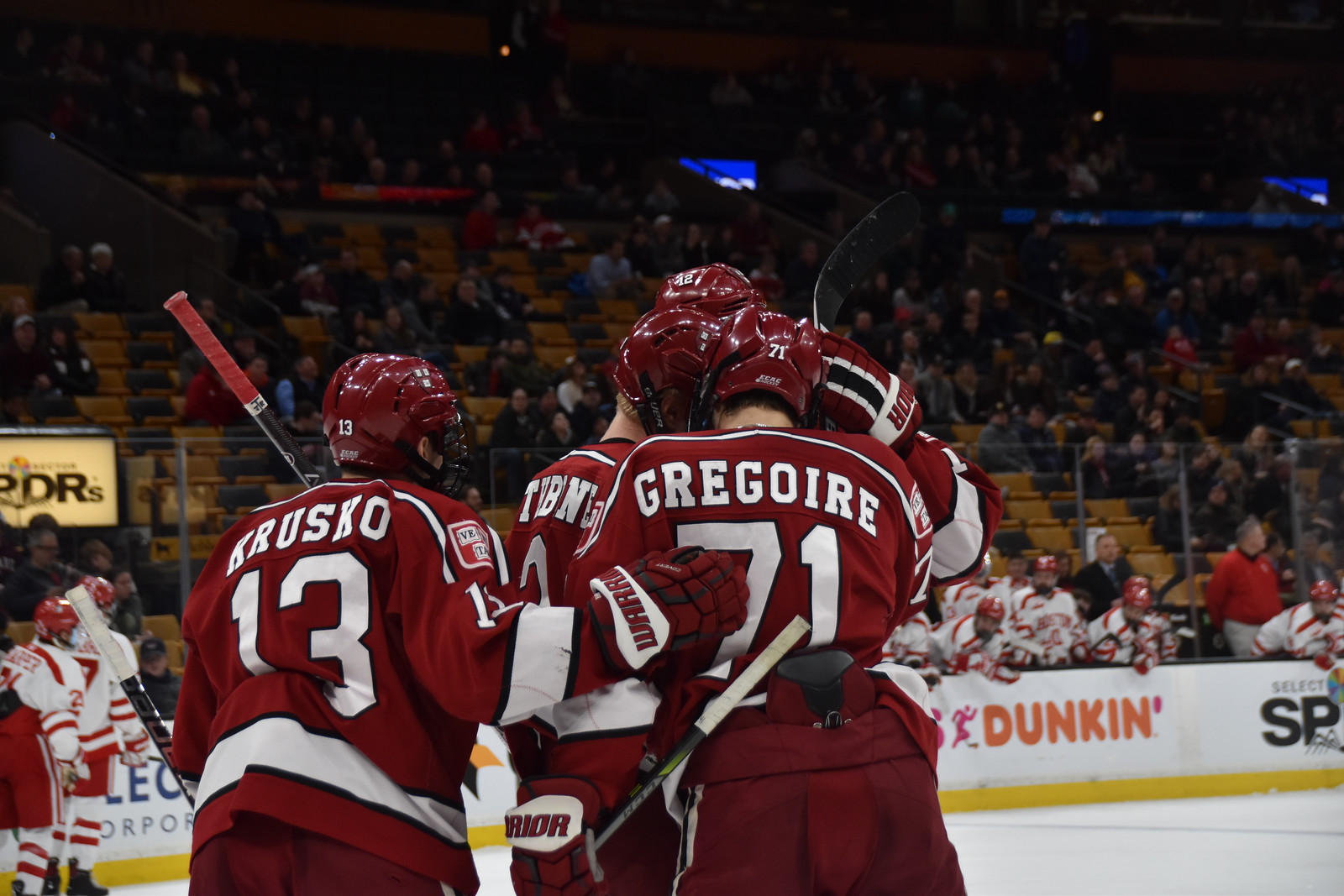 BOSTON, Mass. — The consolation game of Boston’s annual Beanpot Tournament usually struggles to inspire its participants. The majority of seats in TD Garden remain empty as two teams skate in a non-conference matchup for the undesired third place.

This year, however, the Harvard men’s hockey team did have something to play for — a silver lining to its disappointing semifinal defeat the week prior. Entering Monday night’s meeting with Boston University at 14th in the Pairwise rankings, the No. 18/15 Crimson was committed to improving its position on college hockey’s most telling scale.

“It can be a tough game to play in,” Crimson coach Ted Donato ’91 said. “However, as far as the Pairwise and the implications for your potential opportunities at the end of the season, it’s just as important as any other game…. I thought our guys came out, played a good, solid game.”

A pair of goals from junior forward Frédéric Grégoire, as well as two assists apiece for defensemen Reilly Walsh and John Marino, guided the Crimson to triumph.

During a stint of 4-on-4 hockey in the third period, Harvard broke out on an odd-man rush. Grégoire, receiving the puck from freshman defenseman Jack Rathbone, called his own number and ripped a wrist shot past the glove and right pad of rookie net-minder Vinnie Purpura. The center’s fifth of the season and second of the game would prove to be the deciding tally. 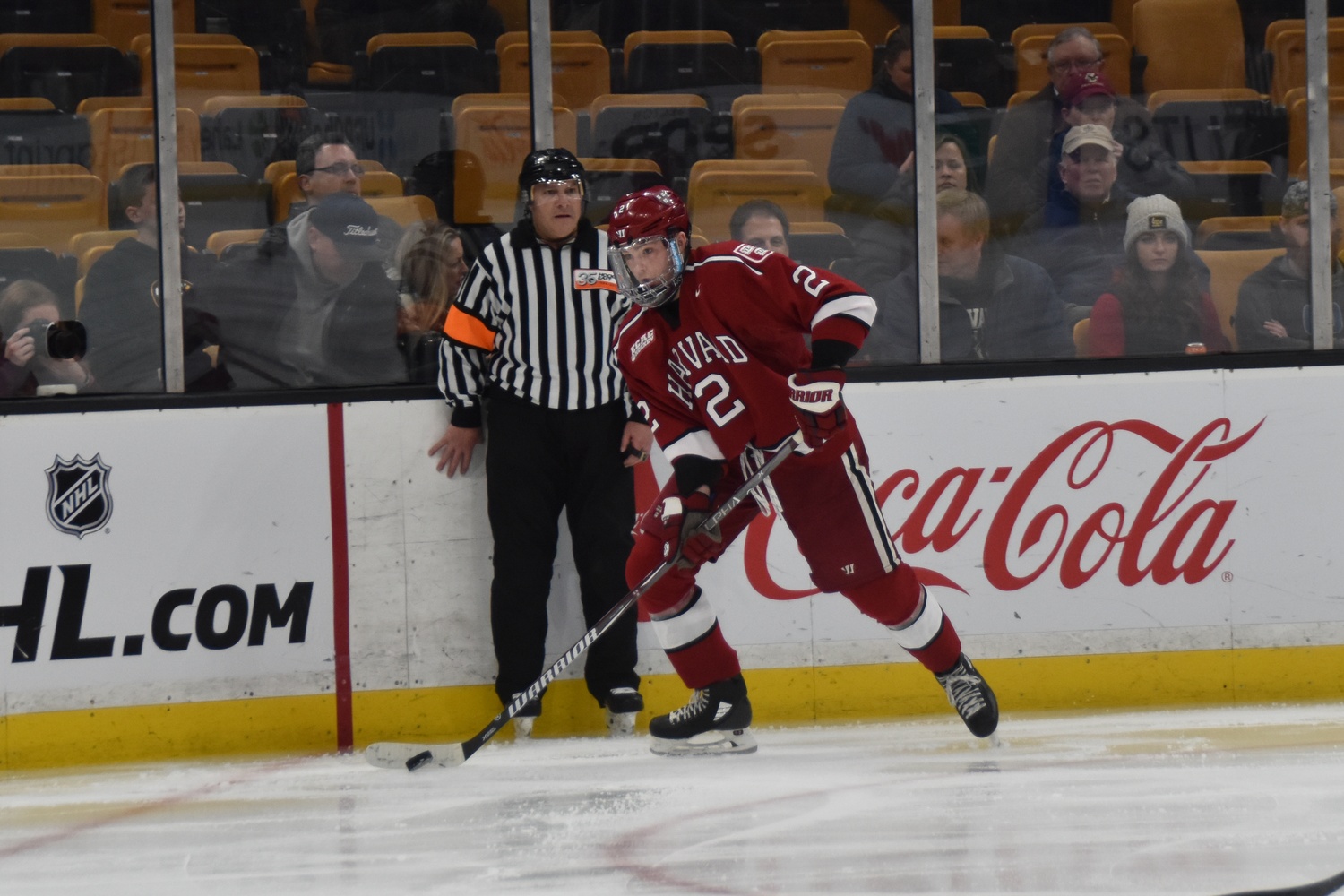 Sophomore blue-liner Reilly Walsh picked up a pair of assists in the victory and has tallied five helpers in his last three games. By Quinn G. Perini

Grégoire’s first strike, also a wrist shot on the rush that somewhat surprised Purpura, established a 1-0 lead for his squad midway through the second frame. Grégoire’s two snipes on Monday continue a recent spell of strong play from the St. Lambert, Qué., native. In his last six games, he is averaging over a point per game (1.33) and has experienced success centering sophomore Jack Donato and co-captain Michael Floodstrand.

“What we may lack in marquee names up front, we have in depth,” coach Donato said. “That line has been really good…. Freddie has been excellent. He had a couple of good chances in the first two periods where we were really harping on him to shoot. It was nice to see him get a couple goals and be rewarded, because he does a lot of unselfish things.”

After Grégoire’s marksmanship broke open the score sheet, the Crimson found twine again four minutes before the period horn to assert a two-score advantage by the intermission.

Sophomore defenseman Reilly Walsh slid across the slot and, from his knees, zipped a pass through the net-front to a waiting Jack Badini. The forward made no mistake with the tap-in goal — Badini’s seventh of the campaign.

For Walsh, the highlight-reel helper marks the second such pass he has dished in the last week. In Friday’s 5-3 victory over No. 20 Union, Walsh set up freshman forward Casey Dornbach’s game-winning goal with a powerplay feed through an open seam. Walsh has pocketed five assists in his past three outings, including last Monday’s Beanpot semifinal loss to Boston College. 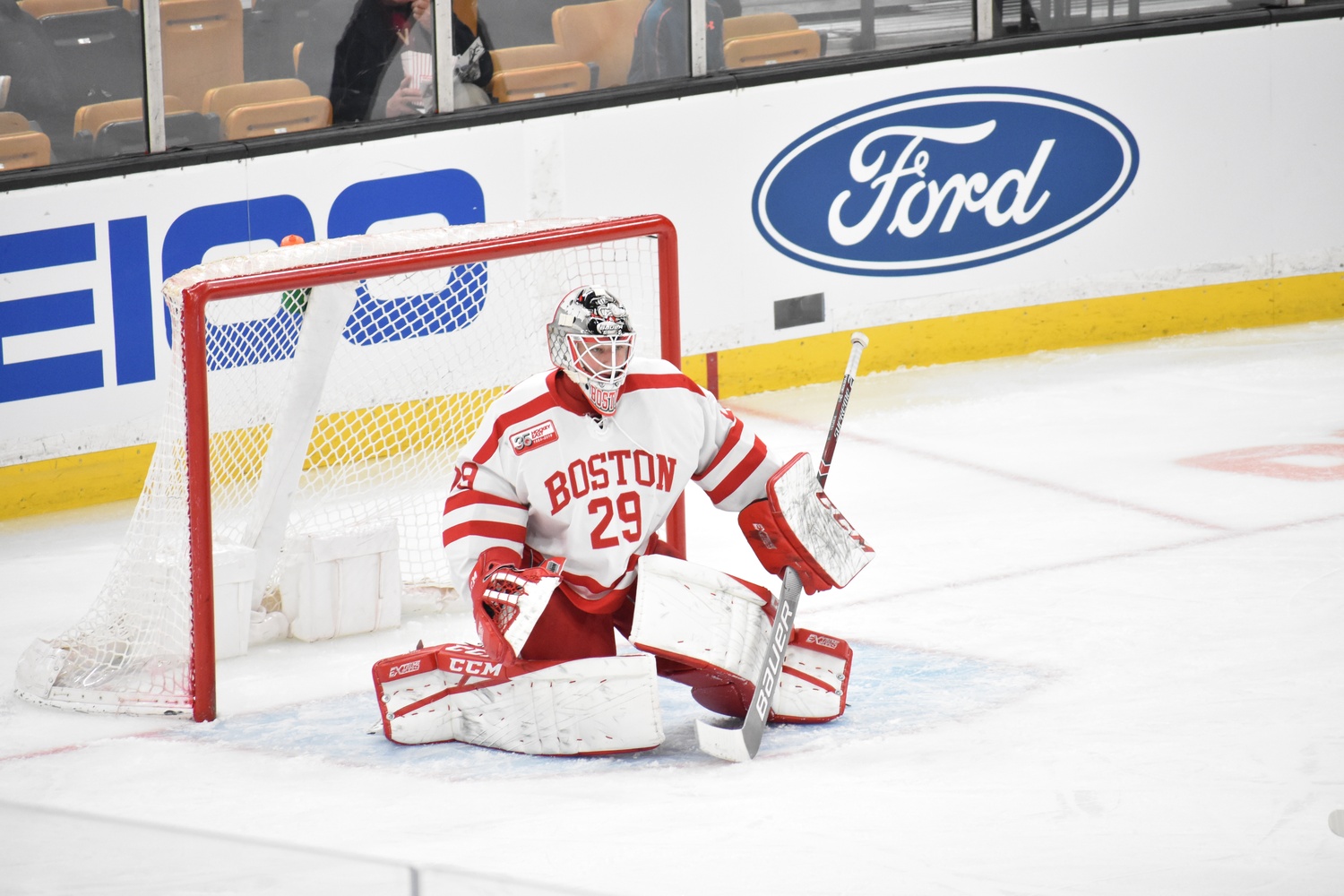 “I just made a move to the net, and I kind of fell,” Walsh recounted. “I heard Badini kind of yell, and so I just threw it across, and he made a good play to finish it. It was a nice play by all of us.”

Senior goaltender Michael Lackey (2 GA, .923 SV%) was building a shutout until early in the third period. BU junior Patrick Curry buried a puck from in close, and in doing so he reached the double-digit goal plateau for the first time in his career while spoiling Lackey’s clean sheet in the process. With the game in its final minutes and already out of reach for the Terriers, a wrist shot from junior Gabriel Chabot also snuck by Lackey.

Overall, though, Lackey was sturdy between the pipes on Monday night. The 24-save performance marks the 15th time in 22 starts this season that he has held the opponent to two scores or fewer. Lackey’s solid season (13-6-3, 2.17 GAA, .923 SV%) has been crucial to the Crimson’s surge back into the rankings and the NCAA Tournament conversation in 2019.

With the accomplishment, Fox joins the elite company of former Crimson standouts Mark Fusco ’83 (44–91—135), Mark Benning ’87 (9–102—111), and Randy Taylor ’87 (14–88—102). Fox, quite possibly the most talented offensive defenseman in college hockey, also becomes the first rearguard to reach the 100-point milestone in his junior season since 2011-2012, when now-Pittsburgh Penguins blue-liner Justin Schultz did so for Wisconsin. 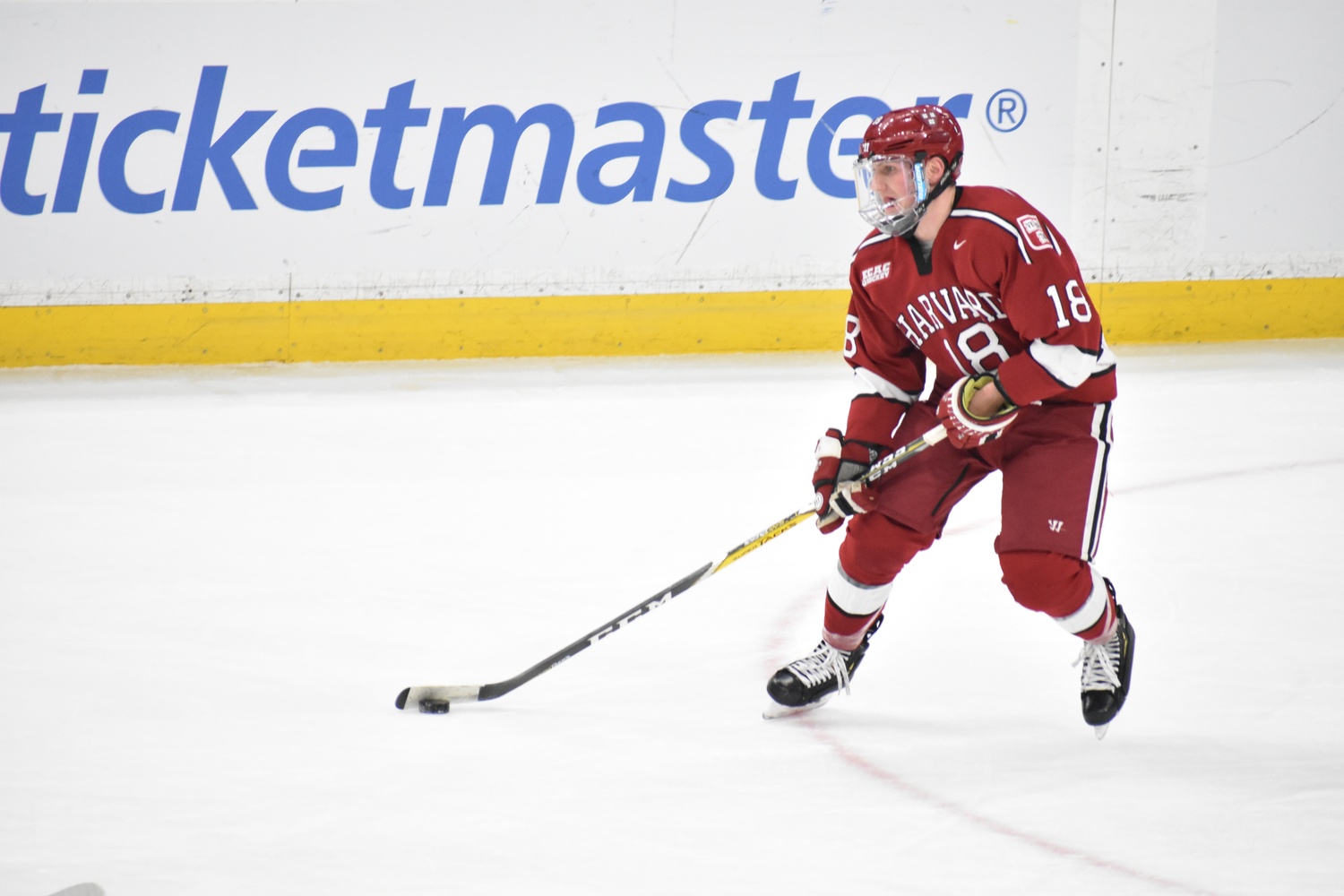 “[Fox is] a tremendous player,” coach Donato said. “He makes others around him better. His poise with the puck, his patience, his playmaking ability — I can’t say enough. I’ve been very fortunate in my life to be around some great players…but I think what he’s accomplished so far in college is pretty special, and we’re happy that he’s on our team.”

Monday night’s Beanpot affair was a clash between two teams with very different motivations. For the Terriers, an inconsequential non-conference game against the Crimson failed to inspire the group, resulting in Harvard’s domination for the bulk of the first two periods. By the time BU honed its game to match the Crimson’s intensity, a comeback was improbable.

Coach Donato’s squad, on the other hand, rightfully approached Monday night as a chance to further its case for an at-large bid to the NCAA Tournament. Despite the early start time and eerie silence in the arena, Harvard took care of a formidable opponent — one whom it tied in early January.

With the loss, the Terriers suffer their first fourth-place finish in the Beanpot since 2014, when the Crimson likewise delivered a frustrating defeat in the consolation match.

“Harvard played a really good game,” said BU coach and former Harvard assistant Albie O’Connell. “I can’t say that about our club. We were more prepared in the practice yesterday…. You can’t play a Division-I hockey game and expect to win when you don’t show up.”