Dodie’s “Monster” is Whimsical and Sharp 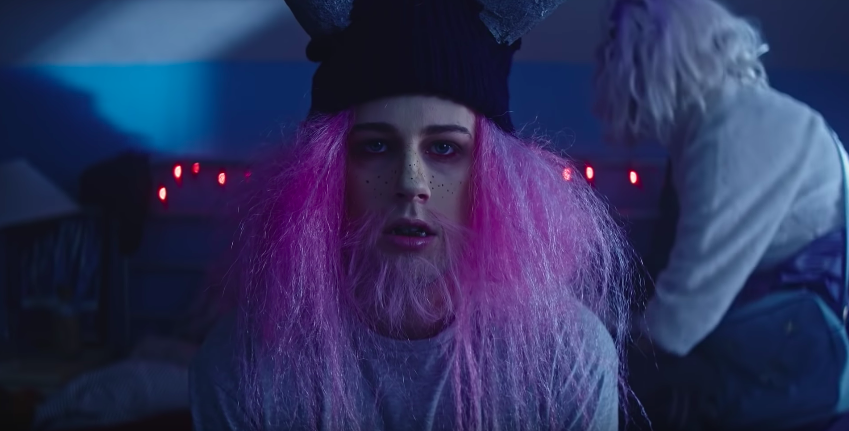 Since the release of her first EP, “Intertwined” (2016), British singer-songwriter Dodie Clark has charmed audiences with a carefully curated brand. She poses with yellow backgrounds and overalls and eyeshadow, each photoshoot a series of meticulously organized messy buns and doe-eyed expressions. Her songs feature ukulele choruses like “Would you be so kind / As to fall in love with me” addressed to faraway fairy tale princes. She posts endearingly awkward vlogs about heartbreak and friendship in her floaty, dreamy British voice. She’s sweet, unassuming, vulnerable — and never a threat.

But there’s a problem — sometimes life doesn’t fit into your color-coded Instagram theme. Having so specific a brand can be limiting, and in her latest video, Dodie runs into a story that can’t be painted in yellow flowers. The result is “Monster,” following a mixture of cartoonish villains wandering through her fairytale world. Dolling its protagonist up in a matted greyish wig, paper-mache horns, and exaggerated makeup, the video fixates on the colorful reimagining of ugliness, not Dodie’s usual pursuit of beauty. At first, the facial features and mannerisms of her titular monster, eerily similar to Dodie’s own, almost endear him to the audience. His one-person meals and frustrated romantic advances resemble the likeable self-deprecation of her own narratives. But then he starts to grow angry, and violent, and by the end, he’s holding her bloodied heart up in front of a little restaurant decked out in fairy lights. The veneer of innocence has faded, and something else emerges, a person evil enough to force her to give her generous soprano a rest.

The exaggerated ugliness and cartoon-style scares signify more than just a shift away from Dodie and her particular kind of beauty. They’re a mirror for the ugliness that lurks beneath some relationships — and the seemingly harmless, frustrated protagonist.

For Dodie, that “monster” seems to be one person in particular. As she described it, the story behind the video was a confrontation with a particular ex-lover. Specifically, she said it was inspired by the moment “in which I sat opposite of someone who I once loved and who once loved me (in a way) and realised now was the moment they started to hate me.” The majority of fans speculate the lover to be her abusive ex-boyfriend of many years, and a person she’s talked about in several of her videos. Dodie’s right in realizing that the specter of domestic violence merits urgency, a song not trying to be cute. With the combination of whimsy and lurking ugliness of “Monster,” she strikes an interesting balance, making the danger of abuse and manipulation dangerous both because of and in spite of the saccharine, multi-colored facade that surrounds it. In an age of ever-more stylized celebrity, “Monster” explores the boundaries of what it means to have a “brand” — and when you need to step outside of it.

—Staff writer Joy Ashford can be reached at joy.ashford@thecrimson.com.