A Conversation on Literature, Love, and Loneliness with Hilton Als 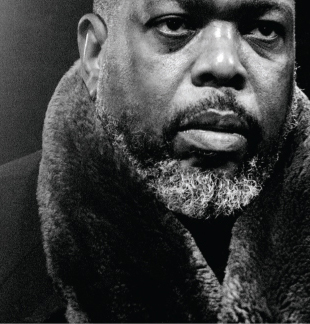 Critic Hilton Als and novelist Claire Messud talked cultural monoliths, a Barbadian family heritage, and the gravity of the human condition at the Mahindra Humanities Center on March 4. Als’s speech revolved around the humanity that characterizes his work — from “Personal History” essays in the New Yorker to his Artist’s Institute one man show.

Claire Messud began the evening by enumerating Als’s many merits: his Pulitzer Prize for criticism after years at The New Yorker and the Village Voice, his books “The Women” and “White Girls,” and the art exhibit on James Baldwin he recently curated at David Zwirner in New York City.

Messud noted that Als will soon relinquish his position as theater critic to be a critic-at-large for the New Yorker, at which point Als chimed in from the audience to say that he won’t have to go out five nights a week anymore.

When Als took the stage, he first paid tribute to his inspirations among the audience: Jamaica Kincaid, to whom he wrote a fan letter after reading “Wingless” and later befriended, and Anna Kohler, an actress who features in one of Als’s first theater pieces.

After paying his respects, Als proceeded to read an excerpt from his novel on Richard Pryor. The novel examines a close relationship between Pryor and a reporter. Their lives are connected by parallels, and they share past ordeals and trauma. The themes set the premise for much of the rest of Messud and Als’s discussion.

After moving from the podium to the neighboring table to begin his conversation with Messud, Als continued to read the next couple of pages of the Pryor novel. Messud insisted that Als continue — Als was reluctant because, he said, he likes to leave the readers wanting less.

In his reading of the novel, Als addressed the difficulty of encapsulating reality and the truth of imagination at once in a form of writing. As for his latest novel, he said, “It’s made up and it’s not made up at the same time.” Pryor is anti-hip-hop, anti-Miles Davis, anti-Toni Morrison — Als wrote that Pryor has his own brand of radicalism. “How can you smash the black patriarchy when it is you, and there is so little of it in the world?” he read from the novel.

Als also spoke of love and of being the extramarital interest of someone married, akin to the reporter’s situation in the piece on Pryor. He explains that when you’re the third person, there is an element of heightened unreality that makes you more desirable — you’re not the one at home who forgot the Bounty. Being the third person also never satisfies — Als writes of the reporter’s insatiable yearning for something more of his relationship with Pryor, which, he later says to Messud, is something he has experienced.

On the other hand, now that Als is in love within a more conventional relationship, he said he doesn’t want to go out five nights a week (at least as a theater critic) anymore. He doesn’t have to go out into the world to see what the world is doing — it’s at home. “Did you get the toilet paper?” — Als said this frustration with a loved one is an endearing reality.

Als offered several insights into the experience of a writer, many of which he had alluded to in his reading. He said of his novel on Pryor that he “wanted to play a joke on nonfiction narrative” — why pretend that the writer is not there? The facts in journalism are always affected by the sensibilities of the journalist, Als remarked. He added that, as Tillie Olsen said, you can call your writing whatever you like — short fiction, a memoir, or a novel — but the labels are futile because regardless, you are writing about memory.

Those memories lay bare human realities, like as Als said, that nothing prevents people from yearning for love — even cruelty. He returned to an image he read aloud earlier where Pryor’s father punches him in the chest, and Pryor’s heart in his chest curls around his father’s fist. When learning about Pryor’s relationship with his father, Als realized that it mirrored the memory of his own father.

Als additionally spoke of the fortifying experience of reading about other people’s loneliness and finding within it your own.

Carissa Rodriguez, an artist in the audience and a visiting lecturer at Harvard, met Als in New York when she was 19. When asked what part of the talk resonated with her the most, Rodriguez cited Als’s generosity in sharing about himself and his experiences.

“He’s my deepest inspiration,” she said.

“It was so honest and genuine — the entire conversation,” Khan said. “It didn’t feel like there was an entire, not just room — more like stadium — full of people here. He would show his own confusion.”

—Staff writer Shruthi Venkata can be reached at shruthi.venkata@thecrimson.com.