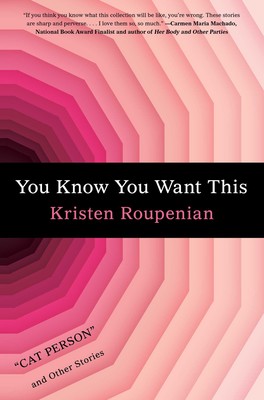 By Courtesy of Simon and Schuster
By Angela F. Hui, Crimson Staff Writer

On Feb. 28, Kristen Roupenian visited the Harvard Book Store to discuss her debut short story collection, “You Know You Want This,” with Boston Globe advice columnist Meredith Goldstein. Roupenian is best known for her short story “Cat Person,” which was published in the New Yorker in December 2017 and went viral in a feat that publishing executives have called “unusual if not unprecedented” for a work of short fiction.

Much of the evening’s conversation centered on Roupenian’s attempts to navigate her story’s unexpected fame. Though Roupenian had been working on the “You Know You Want This” for several years before the publication of “Cat Person,” she still found herself having to consider the popularity of “Cat Person” while preparing her collection for publication.

The other stories in her collection, she explained, are tonally very different from “Cat Person,” whose depiction of an ambiguous sexual encounter resonated with many readers because of its uncanny familiarity. “A lot of the stories in the book are horror-inflected, are very dark,” Roupenian said. “‘Cat Person,’ thematically, is as dark as any of them… but in terms of what actually happens [in the collection], things get much more extreme in terms of murder and monsters and whatnot.”

Before “You Know You Want This” was published, Roupenian considered changing the order of the short stories to accommodate readers of “Cat Person.” She said that among editors there was “a split set of opinions whether we should start…[the collection] with ‘Cat Person’ and then lead people into this other space where things might be more extreme or there would be more genre elements.”

Ultimately, Roupenian decided to open her collection with “Bad Boy,” a horror story. “It felt better to me to… keep the collection in the form it had been before ‘Cat Person’ went viral… and to lead with a story that was a fairly clear signpost of where things were going,” she explained.

The last 25 minutes of the hour-long event were reserved for an audience Q&A. In response to a question about her transition from critical to creative writing — Roupenian graduated from Harvard in 2014 with a Ph.D. in English — she reflected that it was difficult to write fiction while remaining in a literary-critical mindset for her Ph.D. studies. “I am glad now that I had [time] to read books and think about them,” Roupenian said. “But I could not really do creative writing while I was doing that… it felt impossible because I was too attuned to what could go wrong. I was too self-conscious. I feel that, for anyone moving between both worlds, my advice is to do fully the one thing and trust that maybe in the future it will pay off.”

When asked whether “Cat Person” was written in response to #MeToo movement against sexual assault and harassment, Roupenian explained that it was not. “I wrote [‘Cat Person’] around April of 2017, which puts it… before the #MeToo movement had really taken off,” she said.

“But I do think, in retrospect, that some of the same energy that fed the #MeToo movement fed… my story as I was writing it and then the conversation around the story,” she continued. “When I remember that April, what I remember is the news just feeling poisonous all the time.”

“All conversations about gender and dating had this kind of ugly bite to them,” she said.

For some members of the audience, like Boston Globe writer Amy J. Pedulla, this revelation was highly unexpected. “I was surprised that she wasn’t reacting to #MeToo, but she was… unconsciously responding to it in her work without trying to make a response to the movement,” Pedulla said. “That was actually shocking.”

Other attendees simply expressed their admiration for Roupenian’s work. Meredith B. Johns ’22 came to the event because she appreciated reading “Cat Person” when it first went viral. “I came out today because… when I read the story, I hugely identified with it and was taken with her ability to explain a situation that often feels indescribable,” she said. “I haven’t read any other of her stories but was super impressed with her ability to speak about them and liked the excerpt she read as well.”

Brighton resident Jose M. Martinez shared similar sentiments. “I loved [‘Cat Person’] when it came out,” he said. “It made such an impact then and when I read it again recently… that I wanted to come here and listen to [Roupenian] talk about her craft, talk about writing, talk about really anything.”