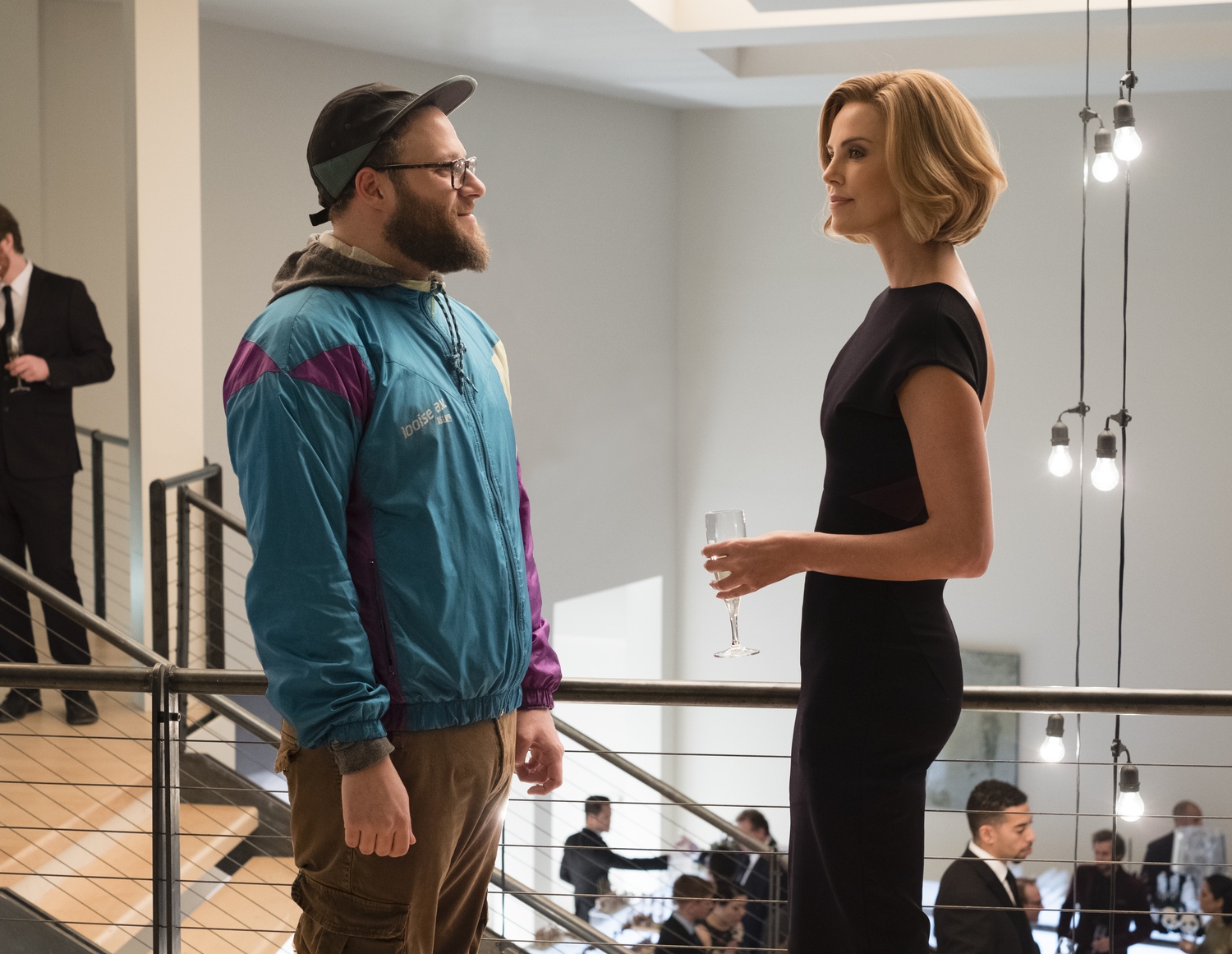 Apart from having starred in separate seasons of “Arrested Development,” the lead actors of “Long Shot” don’t have much in common. One is known for being one of the most talented and beautiful actresses in the world, and the other, her unlikely match, is known for being, well, Seth Rogen. The main selling point of Jonathan Levine’s “Long Shot” is the surprising juxtaposition of its two leads, Rogen’s Fred Flarsky and Charlize Theron’s Charlotte Field. This “average guy falls in love with a hot girl” story has been told time and time again, but “Long Shot” comes with a twist: The hot girl in question is the current Secretary of State and a presidential candidate, and the average guy is… still just average, or so it seems. While this small twist alone may not be enough to make this romantic comedy stand out, the consistently spot-on humor and the surprising chemistry between Rogen and Theron certainly do.

At the start of the film, Fred and Charlotte live in completely different worlds. Fred must quit his job after his newspaper is bought out by corrupt billionaire Parker Wembley (Andy Serkis), and Charlotte is the brilliant and well-regarded Secretary of State under former TV actor President Chambers (Bob Odenkirk). Charlotte’s world changes, however, when Chambers decides that he wants to bring his career to the next level — to film acting, that is — and endorses Charlotte for the presidency in 2020. There’s just one hitch: Voters don’t think she’s funny enough.

That’s where Fred comes in. When the two lock eyes across a “Boyz II Men” themed charity event, Charlotte recognizes Fred as a boy she used to babysit. The two shared a very awkward and stiff (pun intended) moment when they last saw each other years ago, but now she sees the hilarious Fred as the key to rejuvenating her humorless reputation. Charlotte offers Fred a position as her speechwriter, and thus begins one of the greatest developments of romantic tension in cinematic history. “Long Shot” thrives on its slow build-up — whenever one might think the first kiss is on the horizon, they will probably be wrong. Ultimately, it takes a tour of several countries, an aurora borealis sighting, and the near-death experience of a terrorist attack in Moscow for the two to express their feelings for one another. But when they fall for each other, they fall hard.

It is refreshing to see a couple fall in love without all the awkward and time-wasting hesitation endemic to so many other romantic comedies. From the moment they first kiss, Fred and Charlotte are not ashamed or confused by their feelings. The primary obstacle in this film, then, is not typical relationship drama — there’s no cheating, lying, or loss of interest — but the public opinion Charlotte must face as a highly-scrutinized figure. As Charlotte’s coworker Maggie (June Diane Raphael) so astutely points out through an analogy, “The public would have a pretty negative reaction to Kate Middleton dating Danny DeVito.” Movies have certainly forced their protagonists to choose between their career and love before, but usually the career in question is not the presidency. The way Charlotte manages the high stakes of her personal choices and her public life with her down-to-earth relationship with Fred makes this film particularly intriguing. And of course, since politics are involved, there are plenty of chances for Levine to humorously take shots at Republicans, billionaires, misogynists, and Republican-billionaire-misogynists along the way.

Interestingly, the film isn’t just about love and politics. One surprising but heartwarming development Levine explores in “Long Shot” is Fred’s journey toward self-acceptance. At the start of the film, Fred is fully aware of his flaws and always makes self-deprecating jokes. Over the course of his relationship with Charlotte, however, he learns that there are so many sides of him worth loving. In fact, by the end of the film, Fred has adopted “I am worthy of love” as a mantra. By telling the often overlooked story of finding confidence in one’s self, “Long Shot” sets itself apart from every other “average guy falls in love with a hot girl” movie. This is a love story that’s not just about loving another person, but loving oneself, too.

Of course, the second word in “romantic comedy” is just as important as the first. Rest assured, the film is packed with jokes. Unfortunately, much of this humor is dependent on a viewer’s knowledge of specific early ‘90s pop culture references — at many points it’s clear that the film is aimed toward the generation that grew up watching “Beverly Hills, 90210” and listening to “It Must Have Been Love” from “Pretty Woman.” In addition, the whiplash-inducing transitions between the romantic and comedic moments can be a little extreme — the transitions between a reflective and tender moment to an uncomfortably sexual webcam blackmail scene, for example, is particularly jarring. Still, the film gives viewers plenty of chances to genuinely laugh, especially if they feel secondhand embarrassment.

Levine takes a pretty standard premise and twists it at every chance it gets. While certainly not groundbreaking, it is refreshing to see a romantic comedy that actively tries to stand out from so many clichéd ones. Though the film’s novelty alone may not be enough to make it worth seeing, the chemistry between its leads certainly is. “Long Shot” requires a lot of suspension of disbelief — especially with regards to how the presidency works, how hostage situations are handled, and how voters treat female public figures, for example — but there’s one important thing that is perfectly easy to believe: the love between Fred and Charlotte.
—Staff writer Hunter T. Baldwin can be reached at hunter.baldwin@thecrimson.com.