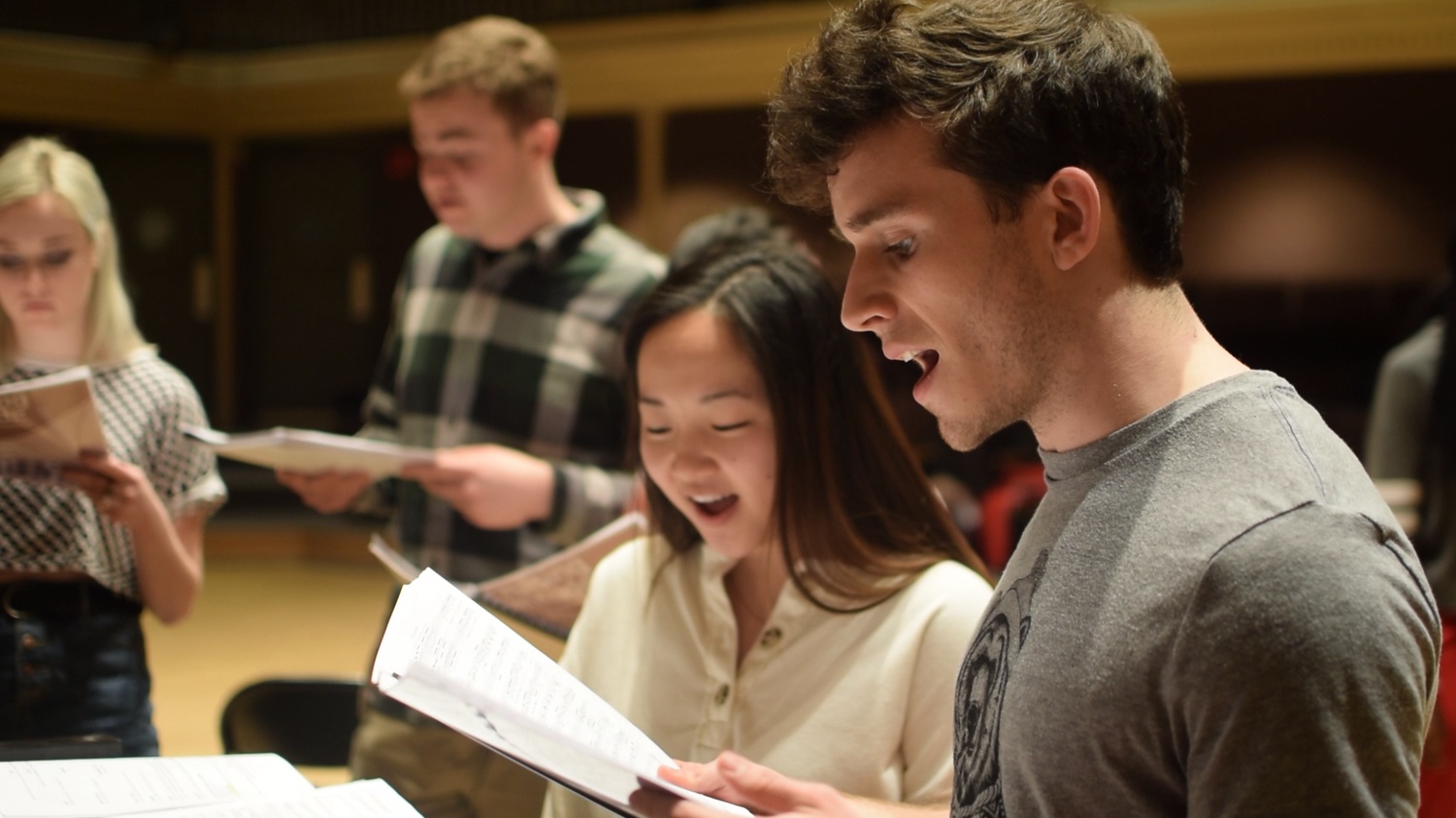 It’s 9 p.m. in the SOCH a couple of weeks before the premiere of “Cruising Altitude,” and a group of artistically-inclined freshmen have made the intrepid hike to the Quad for rehearsal. This year’s iteration of the annual First-Year Musical, developed over the course of the year, runs from May 2 to 5 in Agassiz Theatre and has been entirely written, performed, produced, and directed by freshmen, from the core concept to minutiae of stage management.

“This year’s edition we went totally out of the box,” Samuel A. Thau ’22, one of the co-producers, said. “It’s all set on one very long plane flight from Houston to Heathrow… but everything goes totally sideways, and it turns into a kind of whodunnit mystery.”

Though the entire show is set in one location, “Cruising Altitude” has no lack of excitement. Its protagonists are a young couple, Peter and Jenny, aboard a flight to London. Peter’s plans to propose are foiled when he finds the luggage containing the ring has disappeared under mysterious circumstances. Chaos ensues from that point onwards, embroiling the flight’s eclectic passengers in a high-altitude take on kitchen-sink drama.

The annual froshical is an important opportunity for freshmen to showcase their talents, from the lead performers to the creatives who brought the concepts to life.

“A huge part of the production was trying to figure out how we could mimic a plane on a stage,” Esther Caroline ’22 said, also a co-producer. “Our set designer, Serena [D. Chen ’22], designed this incredible set with two airplane wings on stage.”

“It gives the feel of being on a plane, but still with some suspension of disbelief,” Caroline said.

For many working on the show, “Cruising Altitude” was their first opportunity to work on a large scale musical theatre production.

“I didn’t do any musical theatre in high school at all,” Odessa X. Deng ’22, who stars as Jenny Murray, said. “It was always a goal entering into college to do musical theatre.”

“Something that was really important to us was getting people of all different backgrounds in terms of theatre experience,” director Aviva L. Ramirez ’22 said. “We have this opportunity to introduce ourselves to the theatre community at Harvard and say ‘Hi, I’m here, I’m competent, and here’s something that I made that I’m proud of.’"

Ramirez had never directed a show before “Cruising Altitude.” “Now I’m planning to direct two shows next year,” she said.

Despite the opening night drawing near, cast and crew are relaxed about the upcoming performance. “It’s actually been running incredibly smoothly,” Caroline said. “Things have just been clicking, and it’s totally down to the incredible staff.”

Indeed, it is clear that they work as a tight-knit creative unit. “Even if you have to meet at like, 1 a.m. with ten minute notice because something crazy is happening, no one is ever bitter because we just enjoy spending time with each other,” Ramirez said. “The people on staff and in the cast are some of my closest friends on campus.”

At the core of “Cruising Altitude” is the community that has formed around it, with each cast and crew member truly dedicated to realizing a spectacular performance. “It's hard to tone down how proud I am of this show,” Caroline said. “It’s a group of 50 freshmen who didn’t really know each other before it started, and we’ve really become a family. We’ve been putting in hours and hours and hours — and the result is really just phenomenal.”