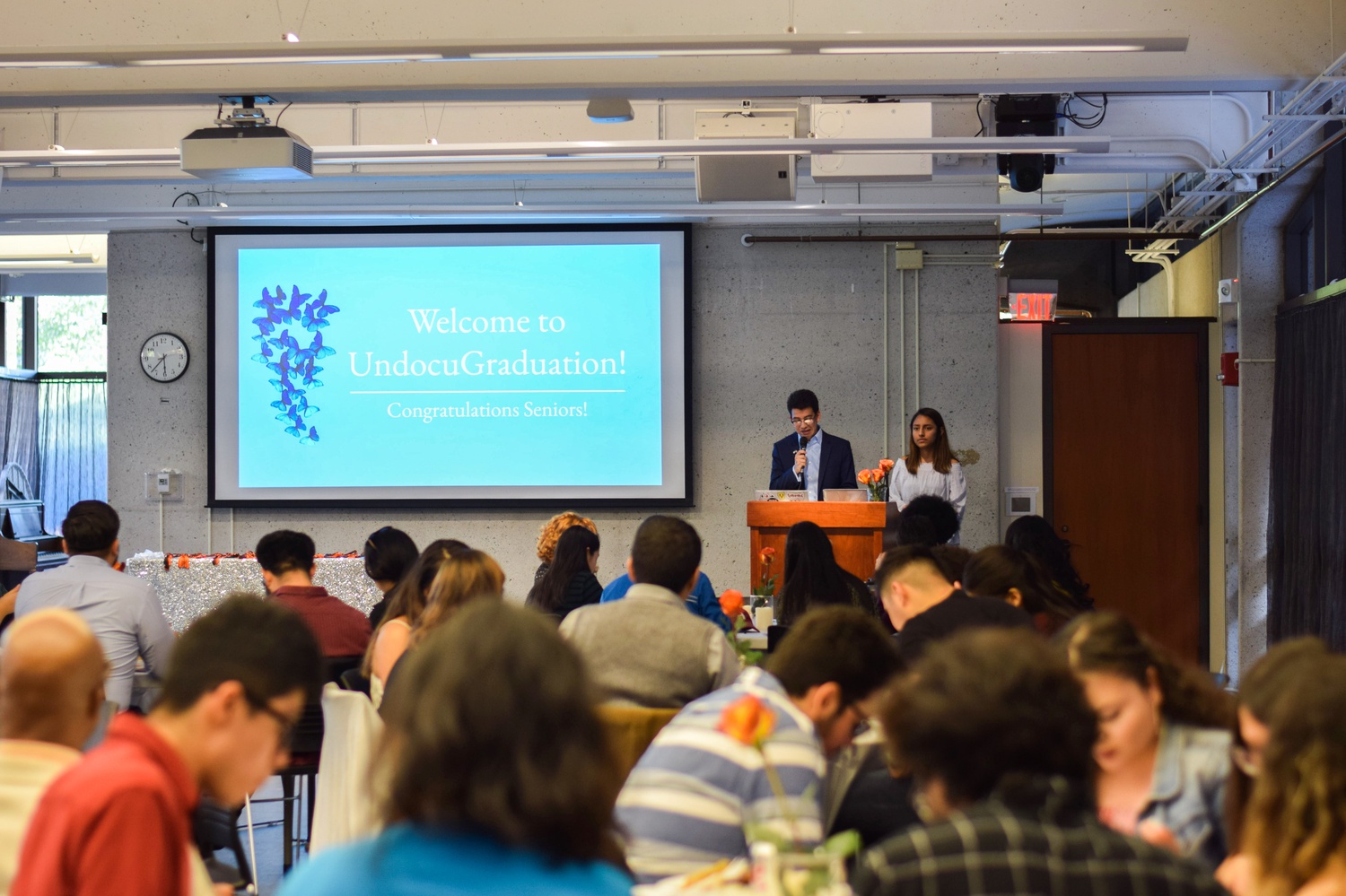 More than 50 students, faculty, staff, and administrators gathered in the Student Organization Center at Hilles Wednesday evening to honor undocumented members of the Class of 2019.

“The event was organized to highlight the struggles and the ways in which undocumented students persevere on this campus,” Act on a Dream co-director Emily A. Romero ’21, a Crimson editorial editor, said in an interview after the event. “This campus can be very difficult to navigate, yet here are so many people who came out at the end of this tunnel as better individuals than how they entered it.”

After a dinner and welcome, speakers including former Act on a Dream director and current Office of Sexual Assault Prevention and Response director Pierre R. Berastain ’10, director of the Harvard Financial Aid Initiative Michael Esposito, and history professor Kirsten Weld praised students’ achievements and offered advice about life after graduation.

Weld — one of 31 professors arrested in 2016 while protesting President Donald Trump’s decision to end the Deferred Action for Childhood Arrivals program — commended students for reaching the milestone of graduation despite the difficulties of being undocumented. DACA is an Obama-era initiative that allows undocumented youth to live and work in the United States legally.

“The road to being whoever you want to be and figuring out what that means has been longer, and it’s been more winding for you than it has been for many of your peers at the College and at the graduate schools here at Harvard,” she said. “And I think that’s really what we’re recognizing here today.”

Doris Reina-Landaverde, a Harvard custodian and Temporary Protected Status coalition organizer who also spoke at the event, said she is proud of the graduates and considers them her “family.”

Under TPS, immigrants can receive temporary refuge in the U.S. if their home countries are deemed unsafe because of factors like armed conflict or natural disasters.

“You make me feel like I take the place of your parents,” she said. “I found in all of you that community, and community is the most powerful. Because if we work together we can survive. I feel so proud now being here tonight as a custodian, as a TPS holder, as a wife, as a mother.”

Daishi M. Tanaka ’19, who served as Act on a Dream co-director in 2017, said in his speech that he appreciates both Act on a Dream and the broader immigrant community at Harvard.

“Most of us might find ourselves really far from home. You might find yourself in this cold elite Ivy League university far from the warm, modest, loving environments in the homes that we grew up in,” Tanaka said. “But being separated from family is an experience that ironically unites us. Immigrants.”

Award-winning Salvadoran-American poet and activist Javier Zamora — a Radcliffe Institute for Advanced Study fellow — delivered the event’s keynote speech. Zamora migrated to Arizona from El Salvador through Guatemala, Mexico, and the Sonoran Desert in 1999. Both his parents fled El Salvador when he was young as a result of the U.S.-funded Salvadoran Civil War.

Zamora commended the graduating students in his speech for their resilience in spite of the obstacles they have faced.

He said “nobody, not this institution, not this president” anticipated the accomplishments of undocumented immigrants.