From Cannes: ‘Bacurau’ is a Gloriously Unworldly Warning Against Modernization 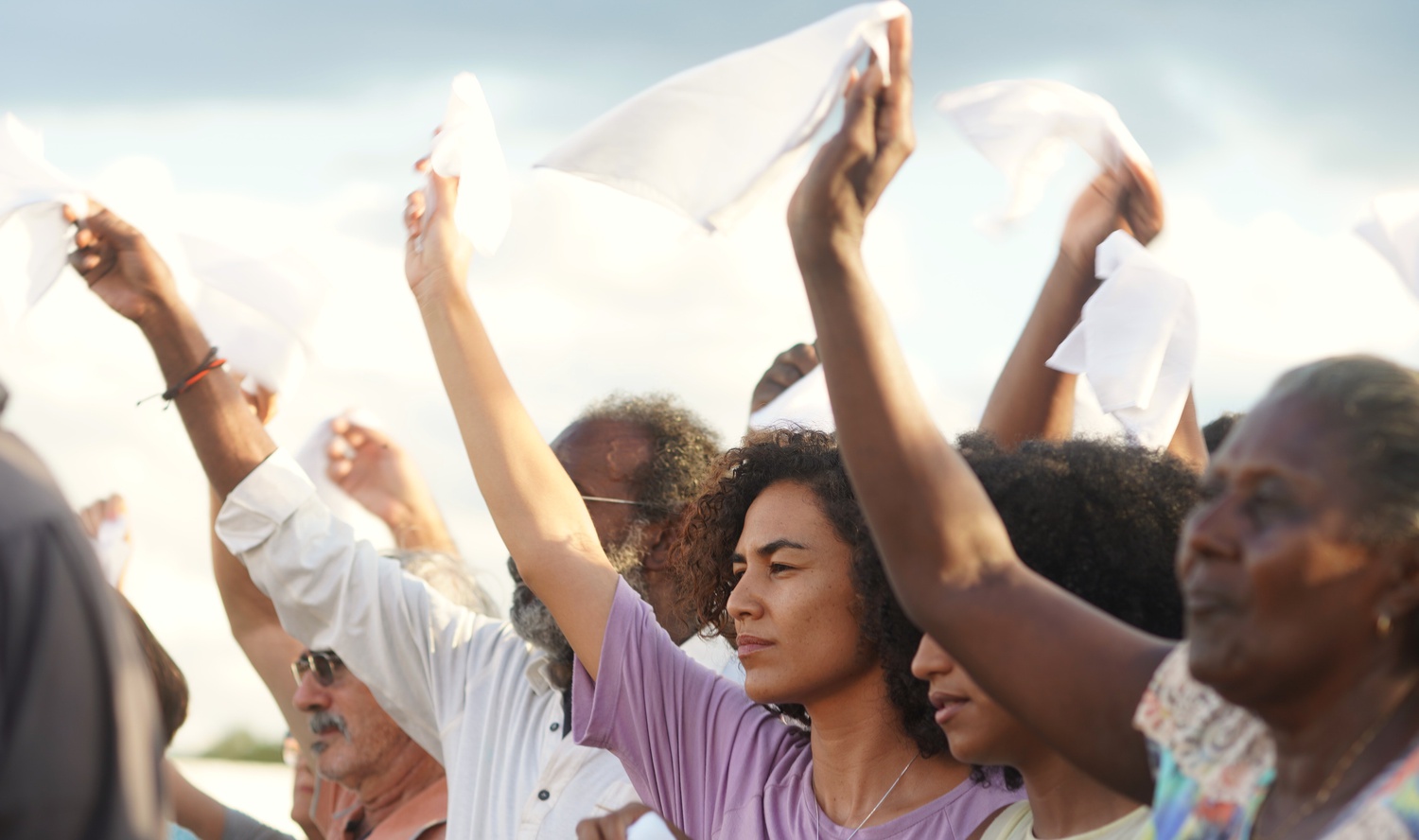 The town of "Bacurau" bids farewell to its matriarch, Camelita. By Courtesy of Festival de Cannes
By Kaylee S. Kim, Crimson Staff Writer

Set “a few years from now,” “Bacurau” is gloriously unworldly. It starts in space, ends with the apparition of a ghost, and is fueled by premonition. As co-directors Kleber Mendonça Filho and long-time collaborator Juliano Dornelles prod viewers to suspend their disbelief through the film’s fantastical moments, they carefully guide them along the way to understanding the perils of modernization, positioning the fictional town of Bacurau at the sweet spot between the past and future, premodern and modern society.

Teresa (Barbara Colen) returns to her hometown of Bacurau in Brazil to pay homage to her late grandmother and the town’s matriarch, Camelita. Following her passing and music-filled funeral procession, Bacarau seems inflicted with a dark twinge of magical realism: Several community members are mysteriously killed, a drove of horses stampedes into town during the middle of the night, a small flying saucer follows a man home, and Bacurau no longer shows up on satellite maps. In actuality, a group of American tourists recruited by a German officer (Udo Kie) are masterminding the downfall of the town and surveilling its people through its UFO-resembling drone. Though their motives are unclear, they get a sensual thrill from killing, so much so that when two members interceed a fleeing car with machine guns, they start having sex right by the murder site. While Bacurau’s community is characterized by its strong sense of codependency — exemplified when Teresa arrives and a flood of people gather to carry and pass on her luggage into her home — membership among the “white gringos” can be abruptly terminated with a bullet to the chest, which certainly happens more than once. To them, killing is a fun game: “I came here for the body count,” one particularly enthusiastic member announces.

Besides the incessant killing, the Americans indulge in a lifestyle that is an ironic blend of old and new: They rely on high-tech gadgets like futuristic drones and earbuds that somehow sense any presence of danger, yet they pride themselves in only using “old school” guns, perhaps in reference to the way modern society romanticizes and appropriates the aesthetics of premodern mechanics. Nonetheless, they seem to believe that their technology gives them a pass to treat rural Brazil as their personal hunting ground. Bacurau, on the other hand, is resistant to the excess of modernity: Though its inhabitants use cell phones, they rely on an emcee-like character who announces all news, both personal and public, through a mic connected to a speaker. Their resistance only applies to superfluous modern amenities, however: They welcome, for example, the vaccines that Teresa brings from outside town.

Tony Junior, a local politician whose relationship with Bacurau has devolved, also starkly contrasts Bacurau’s values. As soon as his video-projecting truck drives within an audible radius of town, everyone hides in their houses so that Tony has to make his flaccid attempt at reconciliation through a megaphone. He brings a truck full of books, food, and medicine as voting bribes, though the townspeople are quick to realize that most of the food is long expired and the medicine has addictive and harmful side effects. Tony is therefore the promise-happy, yes-man politician who sidesteps the implications of his actions for the sake of his public image, making him all too familiar to modern audiences.

Though Teresa’s homecoming sets the film into motion, Filho and Dornelles redirects the focus to a set of eccentric townspeople who endeavour to defend Bacurau before it’s completed erased from the map. Her boyfriend, Pacote (Thomas Aquino); the town’s alcoholic doctor, Domingas (Sônia Braga, who also stars in Filho’s “Aquarius”); and local town hero Lunga (Silvero Pereira), each equipped with enough acting chops to carry the film alone, fight for more than just their people’s survival — they fight for the ideologies that bind them together. Similarly, the Bacurau that Filho and Dornelles construct isn’t so much a utopia as it is a proposed philosophy, one that challenges the endless developments of modernization and knows how much moderate change it really needs.