From Truffles to Title IX 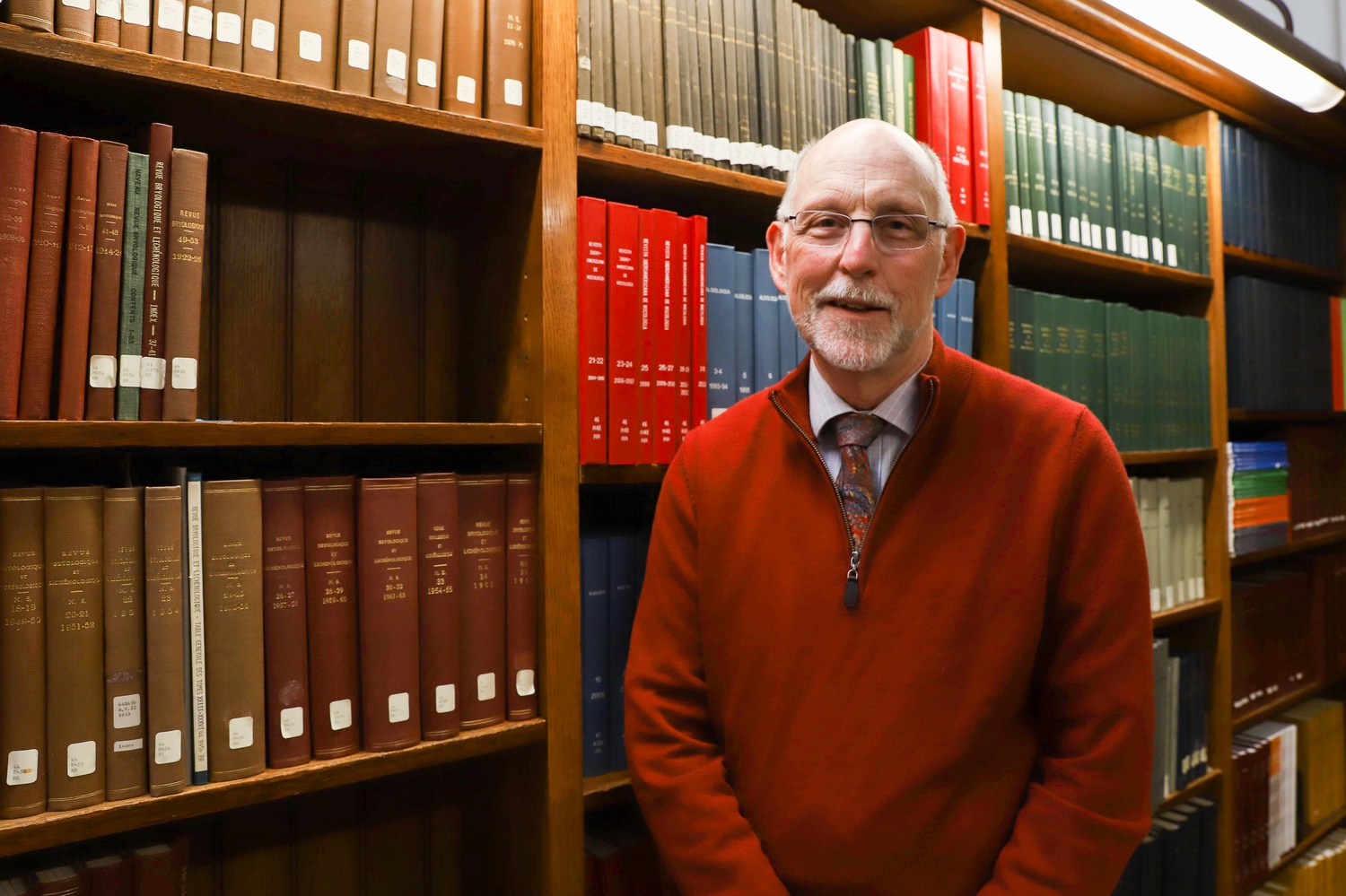 Donald H. Pfister, a professor of Botany, serves as the chair of the Title IX policy review committee. The committee was created in 2015 to study Harvard's policies and recommend changes. By Amanda Y. Su

On any given day, Donald H. Pfister can be found studying fungi in his lab or curating the Farlow Reference Library’s botany manuscript collection — but he’s not just an academic.

At Harvard, Pfister’s duties range as widely as his scholarly pursuits. From conducting research as an Organismic and Evolutionary Biology professor at the Harvard Herbaria to serving as a faculty dean of Kirkland House — and more than a few things in between — he has had a long and varied career during his years in Cambridge.

As knowledgeable as he may be about ascomycota, his area of fungi expertise, his current administrative appointment takes him out of the lab and into one of the most intricate areas of University policy — Title IX.

The federal law, which underpins Harvard’s policies on sexual and gender-based harassment, has long required Harvard to work to adapt its policies to meet students’ and administrators’ best interests. In 2015, following the initiation of a federal probe into Harvard’s compliance and a survey that found a dire sexual misconduct climate, former University President Drew G. Faust appointed Pfister and a team of other professors, administrators, and students to examine the University’s policies.

Since then, Pfister and his team have navigated a changing federal policy landscape, student activism, and an ever-evolving social climate on campus. In October, the group’s most recent report was released. At the time, University President Lawrence S. Bacow wrote that he was committed to implementing its recommendations.

Between his academic roles, a stint as the interim dean of Harvard College, and his welcoming demeanor, those who know and work with Pfister say his background makes him an ideal candidate to steward Harvard’s ongoing efforts to ensure its Title IX policies are effective. 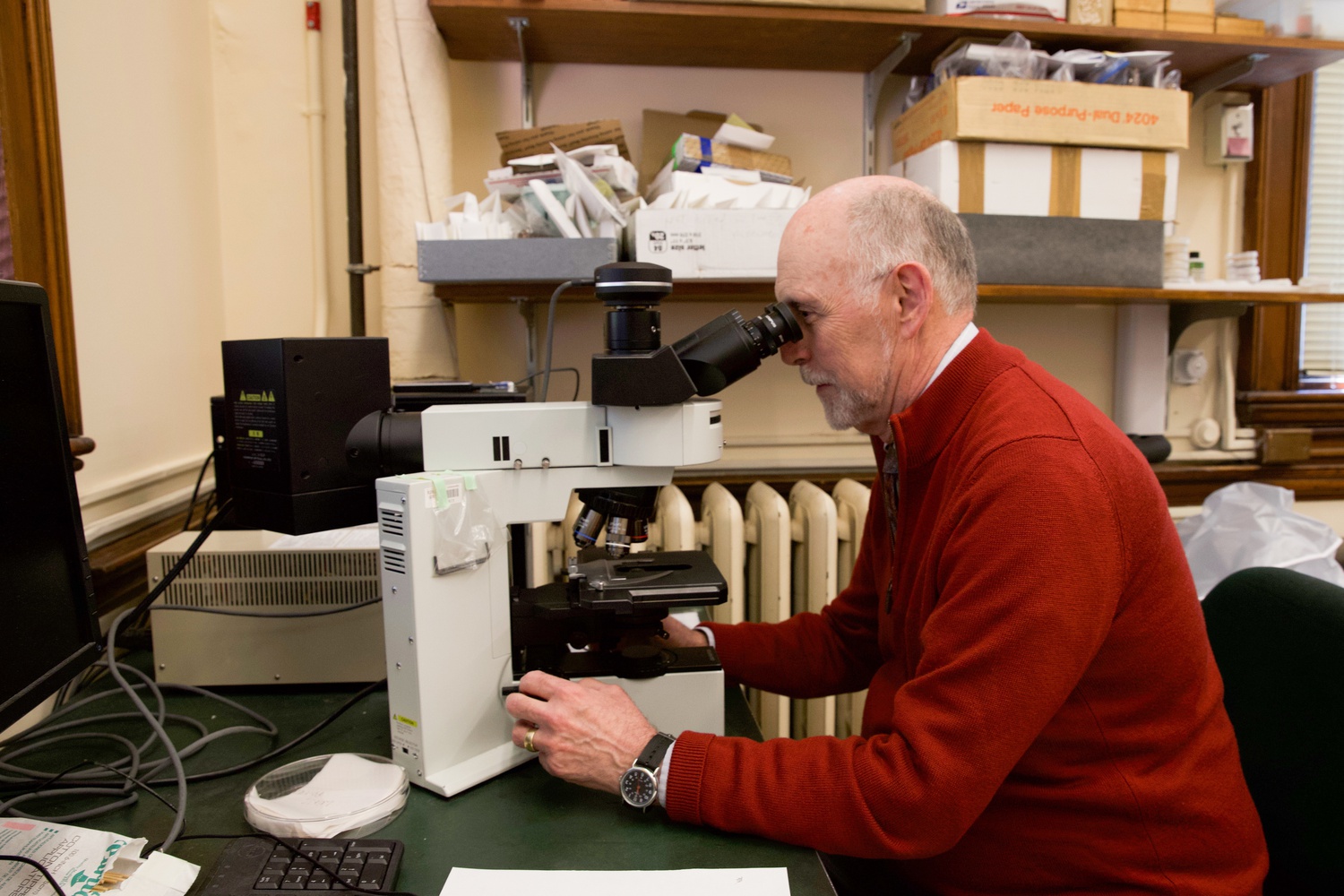 Pfister poses looking through a microscope. Pfister's research has focused on the molecular and morphological history of fungi. By Amanda Y. Su

When Pfister came to Harvard in 1974 as an assistant professor in the Biology department, he had no intention of joining the interconnected webs of Harvard’s administrative processes — Title IX-related or otherwise.

“I always thought the administration was kind of the enemy,” Pfister said with a laugh. “So, you know, I surprised myself a little bit that I've ended up doing administrative work.”

Pfister first dabbled in Harvard’s administrative world when he became the curator of the Farlow Library in 1974. He later became the Harvard Herbaria’s director, and eventually the faculty dean of Kirkland House. He held the latter position for 18 years, from 1982 to 2000.

Today, Pfister credits some of his administrative know-how to his interactions with students as Faculty Dean.

“I never would have known the number of undergraduates that I knew as a faculty dean, if I were just teaching,” he said. “In 18 years, I once calculated what it was — it's thousands of students.”

Pfister has also served as an Administrative Board member, the Dean of the Summer School, and — from 2013 to 2014 — as the interim dean of the College.

Among his students and colleagues, Pfister is known for his openness and depth of knowledge. James K. Mitchell, a graduate student in his lab, wrote in an email that Pfister was “supportive” and a mentor to any student interested in the field.

“I consider myself very lucky that he was here,” Mitchell wrote. “Otherwise, I doubt I would have discovered or been able to pursue my academic interest in mycology.”

Judith A. Warnement, a librarian for the Harvard University Botany Libraries who has worked with Pfister for 30 years, said he has always been “a great boss, and a really fair person,” and that Pfister’s committee appointment was no surprise.

“Because he's done so much, we wonder who they ask when he doesn't,” Warnement said. “I’ve always said he’s such a good citizen of Harvard.”

Pfister said his time as interim dean also may have been a consideration when he was selected as chair of the Title IX committee.

“I'd worked with undergraduates a lot,” he said. “I had to handle difficult situations sometimes.”

Pfister’s Title IX policy review committee first convened in 2015, amid a period of heightened visibility for sexual misconduct across campus and the country.

In 2014, the Department of Education’s Office for Civil Rights opened an investigation into Harvard’s compliance with Title IX. That same year, Harvard’s first central Title IX office was created and it overhauled its policies. In 2015, a national survey on sexual misconduct climate found that 31 percent of women in Harvard’s senior class had experienced some form of “nonconsensual sexual contact.”

In the aftermath, Faust created the Title IX policy review committee to evaluate how the new policy — and its enforcement — were playing out.

Pfister described the committee as dedicated to evaluating the efficacy of Harvard’s Title IX policies and procedures. The committee comprises faculty and student representatives.

In October 2018 — three years after its inception — the group produced an “interim” report with recommendations for University President Lawrence S. Bacow to consider. Those recommendations called for the Office for Dispute Resolution — which investigates formal Title IX complaints — to shorten its reports, and for the Title IX office work to be more transparent.

“We’re not either making the law or enforcing it,” Pfister said. “We want this to work. We want it to work for everybody.”

In the policy review committee, Pfister said he sees himself as the “mediator” of the group.

“I’m keeping everybody on topic and trying to make sure that we're living up to our charge as a committee,” he said.

Deputy Provost Margaret E. Newell, the Harvard administrator who oversees Title IX and sits on the committee, cited his experience in a variety of roles — both academic and administrative — as a key strength.

“He has as broad of a perspective as you could hope for in terms of how student life happens in the college, how the ad boards operate, and what some of the challenges are at that level,” she said.

“He's a very balanced, sensible, dedicated person who really loves students and loves Harvard and loves teaching,” Newell added. “I think he's been a terrific chair for the committee.”

Pfister may not have entered with Title IX-specific knowledge at the committee’s outset, but Sarah E. Wald — a Harvard Kennedy School Title IX coordinator and a member of the Title IX committee — said different backgrounds benefit its activities.

“Having different perspectives in any group is helpful,” Wald said.

Even though Bacow has accepted the October report recommendations, the committee’s work is far from done. Pfister said they will have to “wait and see” how University and federal policies shift in the coming months. In November 2018, United States Secretary of Education Betsy D. DeVos announced a new Title IX rule that deviates from many current Harvard procedures, most notably in its mandate of live hearings and redefinition of sexual harassment.

For now, Pfister said he believes Harvard’s policy could be a model for other schools.

“I think the Harvard policy is special in a way because it includes all of the schools, and all of the employees, students, and faculty,” Pfister said.

As for Pfister himself, he plans to chair the committee for as long as Harvard wants him to stay.